β-caryophyllene (BCP) is a cannabinoid receptor 2 (CB2) agonist that tempers inflammation. An interaction between the CB2 receptor and peroxisome proliferator-activated receptor gamma (PPAR-γ) has been suggested and PPAR-γ activation exerts anti-arthritic effects. The aim of this study was to characterize the therapeutic activity of BCP and to investigate PPAR-γ involvement in a collagen antibody induced arthritis (CAIA) experimental model. CAIA was induced through intraperitoneal injection of a monoclonal antibody cocktail and lipopolysaccharide (LPS; 50 μg/100 μL/ip). CAIA animals were then randomized to orally receive either BCP (10 mg/kg/100 μL) or its vehicle (100 μL of corn oil). BCP significantly hampered the severity of the disease, reduced relevant pro-inflammatory cytokines, and increased the anti-inflammatory cytokine IL-13. BCP also decreased joint expression of matrix metalloproteinases 3 and 9. Arthritic joints showed increased COX2 and NF-ĸB mRNA expression and reduced expression of the PPARγ coactivator-1 alpha, PGC-1α, and PPAR-γ. These conditions were reverted following BCP treatment. Finally, BCP reduced NF-ĸB activation and increased PGC-1α and PPAR-γ expression in human articular chondrocytes stimulated with LPS. These effects were reverted by AM630, a CB2 receptor antagonist. These results suggest that BCP ameliorates arthritis through a cross-talk between CB2 and PPAR-γ.
Keywords: β-caryophyllene; CB2 receptors; PPAR-γ; CAIA; arthritis β-caryophyllene; CB2 receptors; PPAR-γ; CAIA; arthritis

Rheumatoid arthritis (RA) affects 0.5–1.0% of the adult population worldwide and represents one of the main causes of disability and productive loss in countries with elevated income [1]. Autoimmunity and inflammation play key roles in the progression of the disease; moreover, synovia hypertrophy together with inflammation and tenderness of small joints represent the characteristic and relevant hallmarks of arthritis [2].
As far as the pathophysiology of this condition is concerned, it has been proposed that a genetic background together with an “environmental precondition” triggers an exaggerated immune reaction that induces the production of autoantibodies, including the rheumatoid factor and antibodies to citrullinated peptides [3,4]. This altered immune response boosts the activation and proliferation of inflammatory cells that infiltrate the tissues causing edema, cartilage damage, and granulation tissue production. This cascade of pathological events leads, at a later stage, to ankylosis and joint deformities.
The progression of the disease is characterized by a priming of inflammatory cells that release a plethora of pro-inflammatory cytokines, such as tumor necrosis factor (TNF-α), interleukin 1 beta (IL-1β), and IL-6 [5]. The acquisition of the inflammatory phenotype is induced by nuclear factor ĸB (NF-ĸΒ), a transcription factor that translocates upon activation to the nucleus and engages genes that codify for inflammatory proteins. In addition, several matrix metalloproteinases (MMPs) are released, concurring to empower an inflammatory reaction that causes joint destruction [6].
Several treatments have been proposed for RA including non-steroidal anti-inflammatory agents, disease-modifying medicines, and biological drugs to counteract the immune and inflammatory pathological cascade. All these therapeutic approaches have been shown to be effective in the management of rheumatoid arthritis, even if they are expensive and their chronic use in clinical practice is hampered by the occurrence of mild-to-moderate side effects [7,8,9,10].
Beta-caryophyllene (β-caryophyllene, BCP) is a biciclic sesquiterpene extracted from copaiba (Copaifera spp) and marijuana/hemp (Cannabis spp) that has received approval by the Food Drug Adminstration (FDA) because of its intriguing therapeutic potential. This plant-derived product has been used in traditional medicine because of its anti-inflammatory and analgesic effects [11]. β-caryophyllene binds the cannabinoid CB2 receptors which are primarily expressed in the immune and immune-derived cells [12]. Type 1 and type 2 cannabinoid receptors (CB1R and CB2R, respectively) are two subtypes of G-protein coupled receptors of the endocannabinoid system. CB2R is involved in the modulation of inflammatory response not only at the immune system level; in fact, it has been demonstrated that CB2Rs are also expressed in other areas such as in brain regions [13]. Moreover, the corticolimbic endocannabinoid signaling is involved in osteoarthritis and its modulation might be effective in the management of osteoarthritis [14]. BCP shows analgesic activity [15] and, most interestingly, showed anti-inflammatory and anti-oxidant activity in arthritic rats [16]. However, the exact mechanism of this effect has not been yet fully elucidated.
An interaction between the CB2 receptor and peroxisome proliferator-activated receptor gamma (PPAR-γ) has been shown and suggested as explanation for its curative effects, at least in diet induced neurobehavioral change, dyslipidemia, and vascular inflammation; in particular, BCP showed anxiolytic, anti-oxidant, and anti-inflammatory effects mediated by both PPAR-γ and CB2R [17,18]. Once CB2R is stimulated by BCP, other pathways are activated such as SIRT-1/PGC-1α and AMPK/CREB [19], therefore BCP may exert its anti-inflammatory activity thanks to PPAR-γ activation following CB2R stimulation. Interestingly, PPAR-γ also exerts an important role in rheumatoid arthritis [20,21,22].
However, its involvement in BCP anti-arthritic effects has not yet been investigated. The aim of this study was to better characterize the therapeutic activity of BCP and to get insights into PPAR-γ involvement in the protective effects of BCP in a collagen antibody induced arthritis (CAIA) experimental model.

The first manifestations of arthritis were erythema and swelling of 1 or more ankle joints. In the CAIA group, 100% of mice developed arthritis at day 7. Oral administration of 10 mg/kg of BCP significantly reduced the development of arthritis compared to CAIA mice that did not receive BCP at day 14 (Figure 1A–E), and no adverse events were observed throughout the experiment. The progression and the severity of the disease were evaluated using an arthritis index. The disease was always progressive. The arthritis score obtained from Sham and Sham + BCP group was 0 at all time points, whereas the score was significantly increased in the CAIA group compared to Sham groups; BCP treatment significantly reduced the arthritis score at the end of the experiment (Figure 1E). However, BCP treated animals showed a higher disease score than sham mice. This suggests that BCP attenuates but does not fully revert the severity of arthritis.

Arthritis caused an increased expression of NF-ĸB and COX-2 in joints of mice. BCP administration caused a significant reduction of the transcription factor NF-ĸB and COX-2, thus confirming that the anti-inflammatory effect of BCP is also mediated by NF-ĸB and COX-2 inhibition (Figure 6A,B and Figure 7A). Moreover, BCP anti-arthritic and anti-inflammatory effects were elicited through PPAR-γ activation, as shown in Figure 6C and Figure 7B. A significant reduction of PPAR-γ expression and of its co-activator PGC-1α was observed in joints of arthritic mice. BCP treatment caused a significant increase of both PPAR-γ and PGC-1α expression compared to CAIA mice (Figure 6C,D and Figure 7B).

An in vitro experiment on human chondrocytes was performed to demonstrate BCP mechanism of action. This experimental paradigm confirmed in vivo results and showed that BCP caused a marked reduction of NF-ĸB mRNA expression compared to LPS-stimulated chondrocytes (Figure 8A), once again demonstrating a BCP anti-inflammatory effect. In addition, BCP caused a significant increase of PPAR-γ and PGC-1α mRNA expression compared to cells incubated with LPS alone (Figure 8B,C). AM630, a CB2 receptor antagonist, abrogated BCP effects in all targets (Figure 8A–C).

Forty balb/c mice (25–30 g; Charles River, Calco, Italy) were housed in the Animal Facility of the Department of Clinical and Experimental Medicine under controlled environmental conditions (12 h light–dark cycle, 24 °C). Mice were provided with standard food and water ad libitum and all the experiments were performed in compliance with the standards for care and use of animals as stated in the Directive 2010/63/EU, and the ARRIVE guidelines [34]; all experimental procedures were evaluated and approved by the Ethics Committee of the University of Messina and by the Italian Ministry of Health (#756/2016-PR).
Collagen type II antibody-induced arthritis (CAIA) was induced in 20 balb/c mice as follows: on day 0, animals were intraperitoneally (ip) injected with 1.5 mg of 5-clone monoclonal antibody cocktail (Chondrex); on day 3, mice received LPS (50 μg/100 μL/ip) [35]. At day 3, after the completion of the protocol induction, CAIA animals were daily treated by oral gavage with BCP (10 mg/kg/100 μL, CAIA + BCP) or its vehicle (100 μL of corn oil) until the end of the experiment (14th day). The dose was chosen in agreement with previous pilot experiments in our laboratory (data not shown). Sham animals (n = 20) received 100 μL of corn oil (n = 10, Sham) or BCP (n = 10, Sham + BCP). Animals were killed on day 15 and both blood and hind limbs were collected for further analysis.

Evaluation of arthritis was performed throughout the study. Development of arthritis was monitored at the beginning of the experiment (after the antibody cocktail injection), at day 3 (following LPS injection), at day 7, and at the end of the experiment to appreciate alterations throughout the study. The severity of arthritis was blindly evaluated in each limb with a scale of 0–4, where 0 = no macroscopic signs of arthritis, 1 = swelling of 1 group of joints (i.e., wrist or ankle joints), 2 = 2 groups of swollen joints, 3 = 3 groups of swollen joints, and 4 = swelling of the entire limb. The maximum score for each animal was 16.

Human articular chondrocytes (ScienCell, CA, USA) were cultured in a chondrocyte medium (Cat. #4651, ScienCell, CA, USA) in addition to antibiotic mixture (1%) and incubated at 37 °C with 5% CO2. Chondrocytes were cultured in six well culture plates at a density of 2.5 × 105 cells/well and were stimulated with LPS (2 μg/mL; Escherichia coli serotype 055:B5; Sigma-Aldrich, Saint Louis, MO, USA) alone or in combination with BCP (Sanherb Biotech inc., China) at the dose of 10 μg/mL. Moreover, a group of LPS-stimulated chondrocytes were treated with both BCP and AM630, a CB2 receptor antagonist, at the dose of 100 nM (Tocris Bioscience); AM630 was added 2 hours before BCP treatment. Cells were collected following 4 h of incubation with all treatments.

Joints were removed from the hind limbs of all groups of animals at the end of the experiment and fixed in 10% formalin. Joints were decalcified in 10% EDTA for 2–3 weeks and embedded in paraffin. Paraffin-embedded sections were cut and stained with hematoxylin and eosin and with Safranin O for histologic assessment. Arthritis severity in histologic samples was determined by cumulative assessment of synovial inflammation. Samples were scored for synovial inflammation on a scale of 0–5: 0 = normal, 1 = minimal, 2 = mild, 3 = moderate, 4 = marked, and 5 = severe.

TNF-α, IL-6, IL-1β, and IL-13 levels were evaluated in the serum of the animals at the end of the experiment. All cytokines were measured using ELISA kits (Invitrogen, Carlsbad, CA, USA) according to the recommendations of the manufacturer. Samples were run in duplicate and the obtained results were interpolated with the respective standard curves. For each sample, the mean of the duplicates was used and expressed in pg/mL.

This research received no external funding and the article processing charge (APC) was funded by D.A.

The study has been performed with departmental funding assigned to D.A. 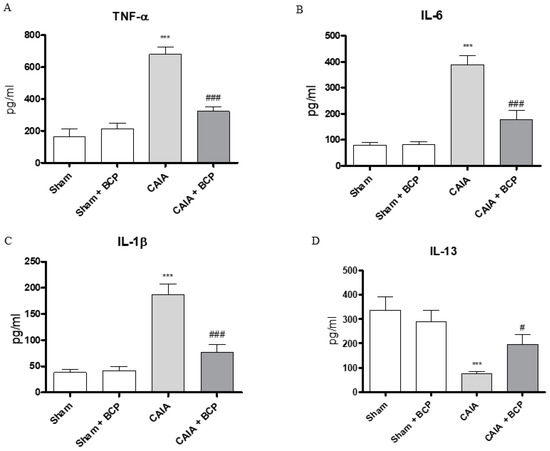 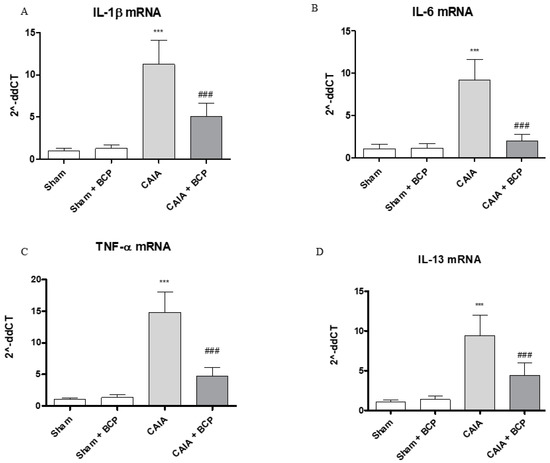 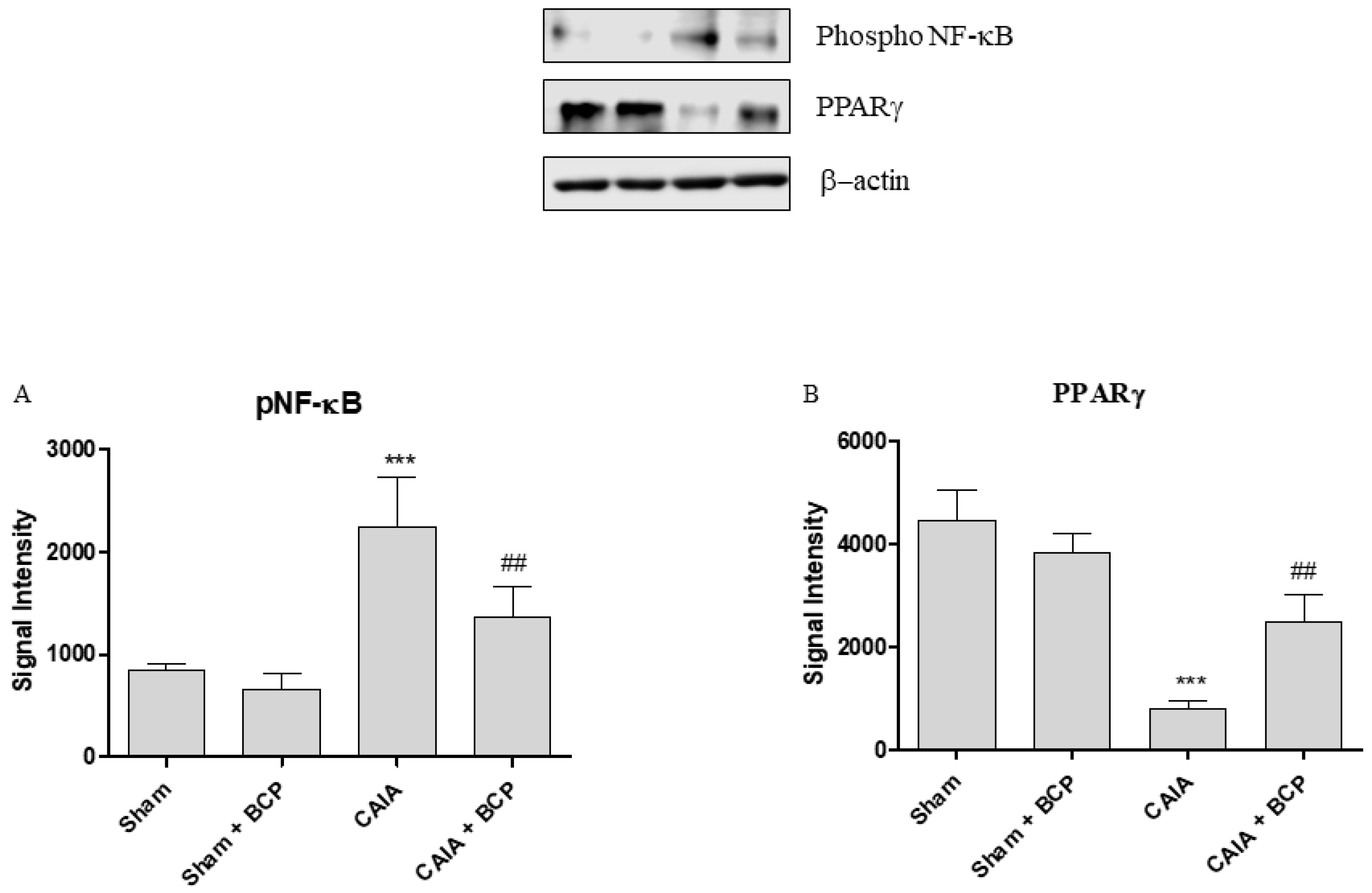