Post-traumatic stress disorder (PTSD) is a psychiatric disorder that occurs after exposure to a traumatic event. It involves both mood and anxiety disorders [1,2]. Approximately 20% of individuals exposed to a significant traumatic event will develop PTSD, and children may be at an even higher risk [3]. Post-traumatic stress disorder prevalence rates are largely similar across countries, with the highest rates being found in post-conflict settings [4].
Oxidative stress has been implicated in the response to stress and in the pathogenesis of neurologic and psychiatric diseases [5]. Post-traumatic stress disorder constitutes a form of persistent life stress and is associated with increased oxidative stress and accelerated cellular aging. Clinical and structural neuroimaging studies have repeatedly found associations between PTSD and loss of neural integrity in the hippocampus, amygdala, medial prefrontal, and anterior cingulate cortices [6,7]. While several drugs and psychotherapies are used to treat PTSD, yet there is not enough reliable evidence to draw conclusions about the effectiveness of most treatments [8,9].
The value of nutritional supplements for the treatment of mental disorders stems from studying the association of some food deficiencies with mental disorders. The omega polyunsaturated fatty acids are categorized into n-3 (or omega-3) and n-6 (or omega-6) groups. Eicosapentaenoic acid (EPA) and docosahexaenoic acid (DHA), the main bioactive constituents of omega-3, are not efficiently produced in humans and should consequently be taken directly from the diet, mainly by consuming fish [10]. The omega-3 fatty acids are important because they are essential for the maintenance and function of the brain in addition to cognition. Brain phospholipids are important for intact memory and cognitive functions [11]. In addition, neurodegenerative disease features a cognitive decrease paralleled by an insufficiency in blood and brain levels of DHA [12]. Dietary omega-3 fatty acid supplements enhance cognitive function, promote neuroplasticity, and improve neurological lesion.
Animal model for PTSD, namely the single-prolonged stress (SPS) model in rats, are very well established and widely used to study PTSD-like behaviors [13,14,15,16,17,18,19,20]. Moreover, omega-3 is well-absorbed in the rat gastrointestinal (GI) tract, where it is distributed to brain via the blood brain barrier [21,22,23,24]. In this study, we investigated the possible protective effect of omega-3 fatty acid on learning ability and memory functions in a rat model of PTSD-like behavior. In addition, the effect of omega-3 on oxidative stress biomarkers was investigated.

Male Wister rats weighing 150–200 g (age: 8–10 weeks) were obtained from the animal facility at Jordan University of Science and Technology (JUST) and were used in this study. Animals were housed in plastic cages (five animals per cage) under hygienic conditions in a climate-controlled room (24 ± 1 °C) with at libitum access to rat chow and water. Rats were identified by tail labelling. They were housed under a 12 h light/dark cycle (light on: 7:00 am). All experimental procedures were applied during the light cycle. The protocol of the study was approved by the Institutional Animal Care and Use Committee of Jordan University of Science and Technology (16/3/3/170).
Animals were randomly assigned into four groups (15 rats/group): control, omega-3 fatty acids (OMG), SPS, and OMG/SPS. Animals were acclimatized for one week before the experimental manipulations were started. The PTSD and PTSD + OMG groups were subjected to the SPS model of PTSD on the first day of experiments. At the same day, the OMG and PTSD + OMG groups were started on Menhaden fish oil (24.3% EPA and DHA, Sigma-Aldrich, St. Louis, MI, USA) at a dose of 4 µL/g body weight (100 mg omega-3 polyunsaturated fatty acid (PUFA)/100 g body weight (BWT)) via oral gavage daily for 6 days per week for a total of four weeks and during the radial arm water maze (RAWM) testing day. Concurrently, the control and PTSD groups were administered corn oil via oral gavage once daily. The control group was not exposed to the SPS procedure. For a particular animal, the RAWM testing was carried out on the next day right after the end of the four weeks period.

The SPS, which is a well-established model for PTSD-like behavior [13,25,26,27,28], was applied to animals of the PTSD and PTSD + OMG groups. Each animal was placed in a double layered plastic Ziploc bag and covered by duct tape in order to ensure complete immobilization for two hours. This was followed by forced swimming for 20 min in a transparent cylindrical container (50 cm in height; 35 cm in diameter; 35 cm water depth). After that, each animal was placed in a cage for 15 min, followed by ether anesthesia for 1–2 min until loss of consciousness.

The RAWM was used to test spatial learning and memory [13,29,30,31]. The RAWM is a standard model for testing of hippocampus-dependent learning and memory, and it has been extensively used as a single test for that purpose [32,33,34,35,36,37]. It consists of six arms radiating out to an open central area to form six swimming paths with an escape platform located at the end of a goal arm that is kept constant for each particular rat during all trials/tests with different starting arm at each trial/test. All four groups were tested using the RAWM for spatial learning ability and memory performance after completing the 21-day treatment period. All experiments were carried out in a dimly lit room with visual cues fixed on the walls of the room during the experiment. Water temperature was maintained at 23 ± 1 °C. Each animal had to find the submerged platform (2 cm beneath water level) located at the end of the one swimming arm (goal arm) in one minute. There were two phases: the learning phase and the testing phase. The learning phase consisted of two sessions; each session had six trials, one minute/trial, and five minutes of rest between the two sessions. During each trial, the animal was allowed to freely swim to find the submerged platform. However, it was guided to the platform after spending one minute of swimming without finding hidden platform. Once on the platform, the animal was left there for 15 s to observe visual cues on the walls before the next trial was started. In memory tests, the animal was neither guided to the platform nor given 15 s on the platform. Each rat had to undergo 12 learning trials followed by three memory tests. The short-term memory test, which was done 30 min after the last learning trial, and the long-term memory tests, which were done 5 h and 24 h after the last learning trial. In the memory tests, each rat was given one minute to locate the hidden platform. An error was recorded when the rat entered to any arm other than the goal arm.

Animals were killed by decapitation, and the brain was immediately dissected out. The brain was then placed over filter paper impregnated with normal saline over a cold glass dish filled with crushed ice. The hippocampus was isolated and placed immediately in a previously labeled Eppendorf tube and transferred to a container filled with liquid nitrogen. Eppendorf tubes were placed at −70 °C until analysis.

All statistics were carried out using the GraphPad Prism (4.0) computer program (GraphPad Software, San Diego, CA, USA). Three-way analysis of variance (ANOVA) was used to compare the number of errors in RAWM learning trials with a multiple comparison post-test. Time (repeated measures factor) and interaction with omega-3/no omega-3 and PTSD/no PTSD were used as independent group dimensions. Comparisons of the number of errors in RAWM memory tests and immunoassays results were carried out using two-way ANOVA followed by Tukey’s post-test. p < 0.05 was considered statistically significant. All values are represented as mean ± standard error of the mean (SEM).

3.1. Effect of Post-Traumatic Stress Disorder and/or Omega-3 on Learning and Memory

The SPS significantly increased TBARS levels when compared to other groups (F(1,56) = 7.80, p < 0.05). Omega-3 administration normalized this elevation, as shown in Figure 5.

The present study aims to identify the possible protective effects of omega-3 fatty acid supplementation on improving learning ability, enhancing short- and long-term memory, and reducing oxidative stress levels in an SPS rat model. The SPS is a rodent model of traumatic stress exposure that produces key PTSD phenotypes such as impairment in both learning and memory [15,25,39,40,41]. Current results are consistent with previous findings that examined short- and long-term memory impairments in rats exposed to SPS as a model of PTSD [40,42,43]. Administration of omega-3 prevented both short- and long-term memory impairment in OMG/PTSD. Current findings are in agreement with results of other studies that examined the protective effects of omega-3 on cognitive impairment associated with different conditions [44,45].
In rat model of traumatic brain injury [46], memory impairments were associated with significant declines in antioxidant mechanisms. Similarly, current results showed that SPS significantly decreased hippocampal antioxidants, mainly GSH and the GSH/GSSG ratio, and activities of GPx and catalase. These findings suggest that oxidative stress leads to brain neuronal damage and memory impairment. Several studies link oxidative stress to cognitive impairments in a number of health conditions, such as in rat model of social stress [47], sporadic dementia of Alzheimer’s type [48], sleep deprivation [49], consumption of high-fat diet [29], and PTSD [13,25]. Interestingly, we show that treatment with omega-3 prevented PTSD-induced cognitive impairments and reduced oxidative stress biomarkers. These findings are consistent with findings of previous studies [13,25]. It has been found that omega-3 enriched dietary supplements attenuate traumatic brain injury in rats and reduce plasticity and learning ability impairment [46]. In addition, omega-3 was shown to reduce the risk of age-related brain impairments [50], improve cognition in older adult women [51], facilitate functional recovery after ischemic brain damage [44], and prevent post-traumatic distress after accidental injury [52]. The PTSD was also revealed to impair memory by increasing oxidant biomarkers such as GSSG level in the hippocampus tissue. Current results are consistent with our previous studies in PTSD rat model [25,41].
Thiobarbituric acid reactive substances are byproducts of lipid peroxidation and markers of oxidative stress. Following spatial learning and memory tests, hippocampal levels of TBARS were significantly increased compared to other groups. Notably, high TBARS level were also reported in the cerebral cortex and hippocampus of animals exposed to restraint stress [53,54]. Interestingly, omega-3 prevented TBARS elevations, which is consistent with decreased plasma TBARS following omega-3 supplementation in rats [55]. In addition, omega-3 induced a reduction of TBARS levels in rats’ corpus stratium [56]. On other hand, no differences in plasma TBARS were observed after fish oil supplementation in a rat model of streptozotocin induced diabetes [57].
In conclusion, this study shows a protective effect of omega-3 fatty acid against PTSD-induced short- and long-term memory impairment, possibly through preventing alterations in oxidative stress biomarkers in the hippocampus of PTSD animals.

The study was funded from the Deanship of Research of the University of Jordan. 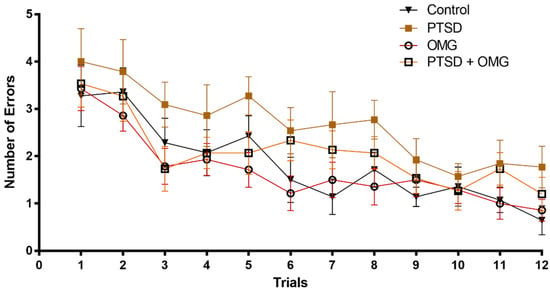 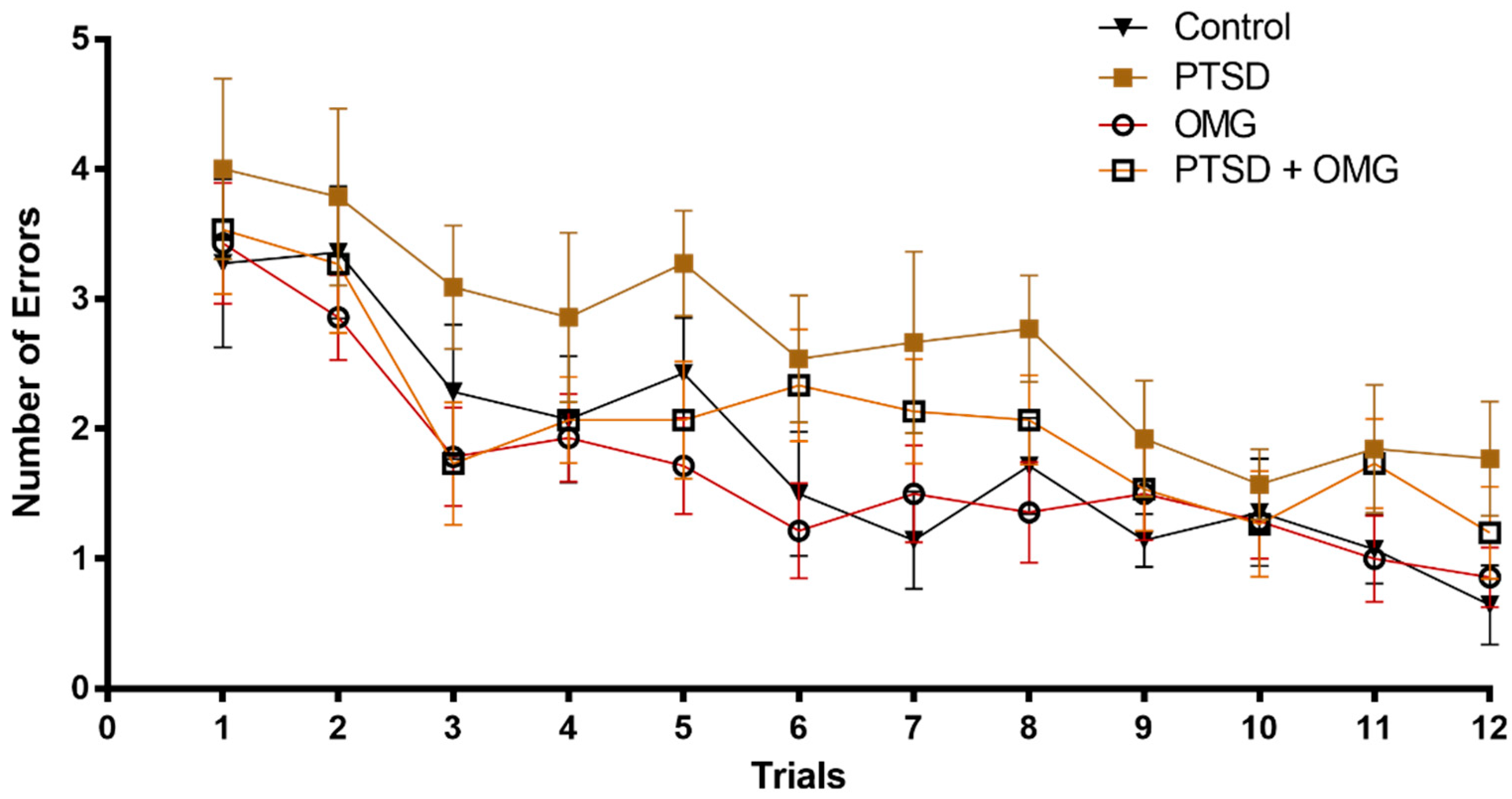 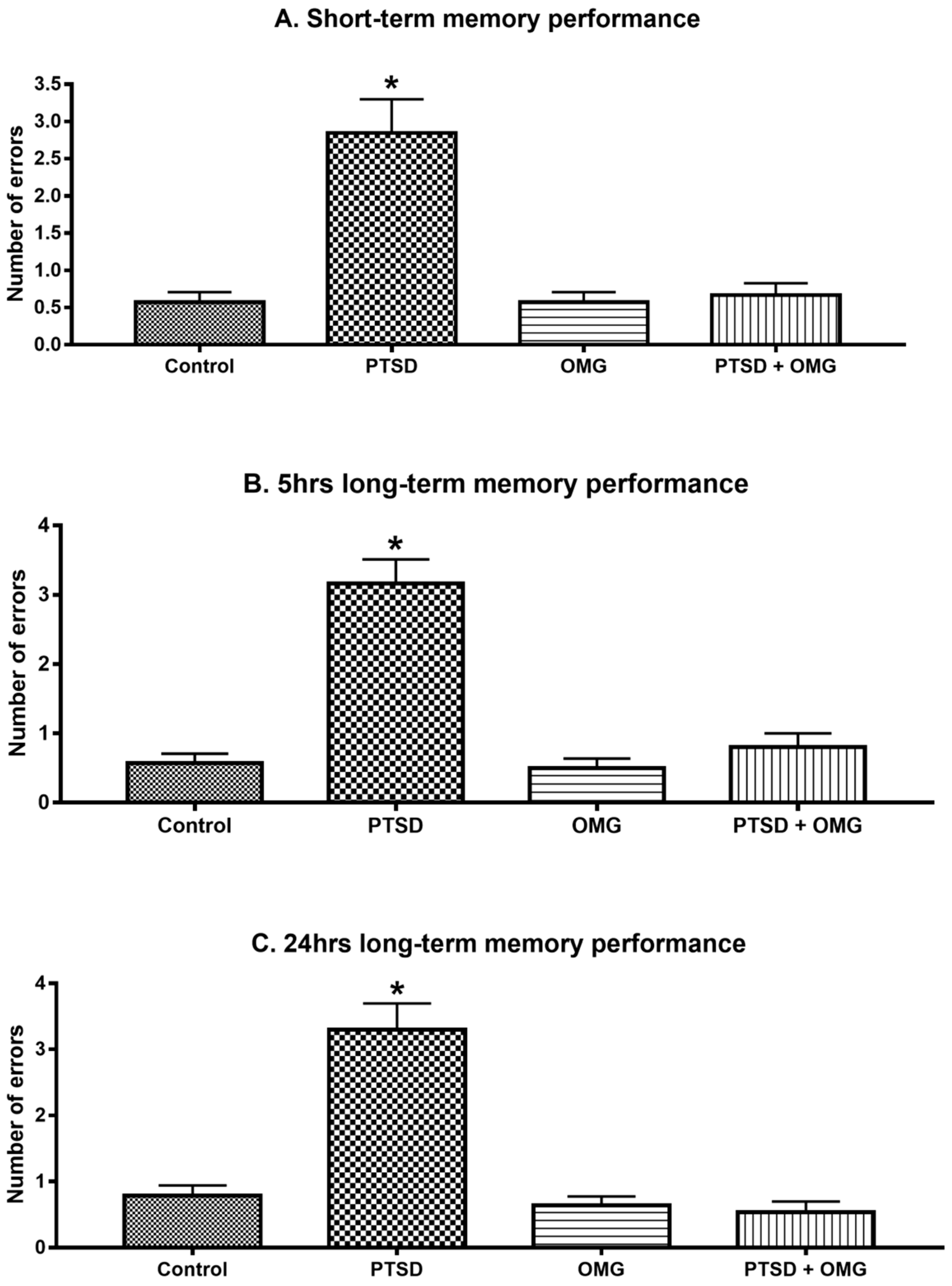 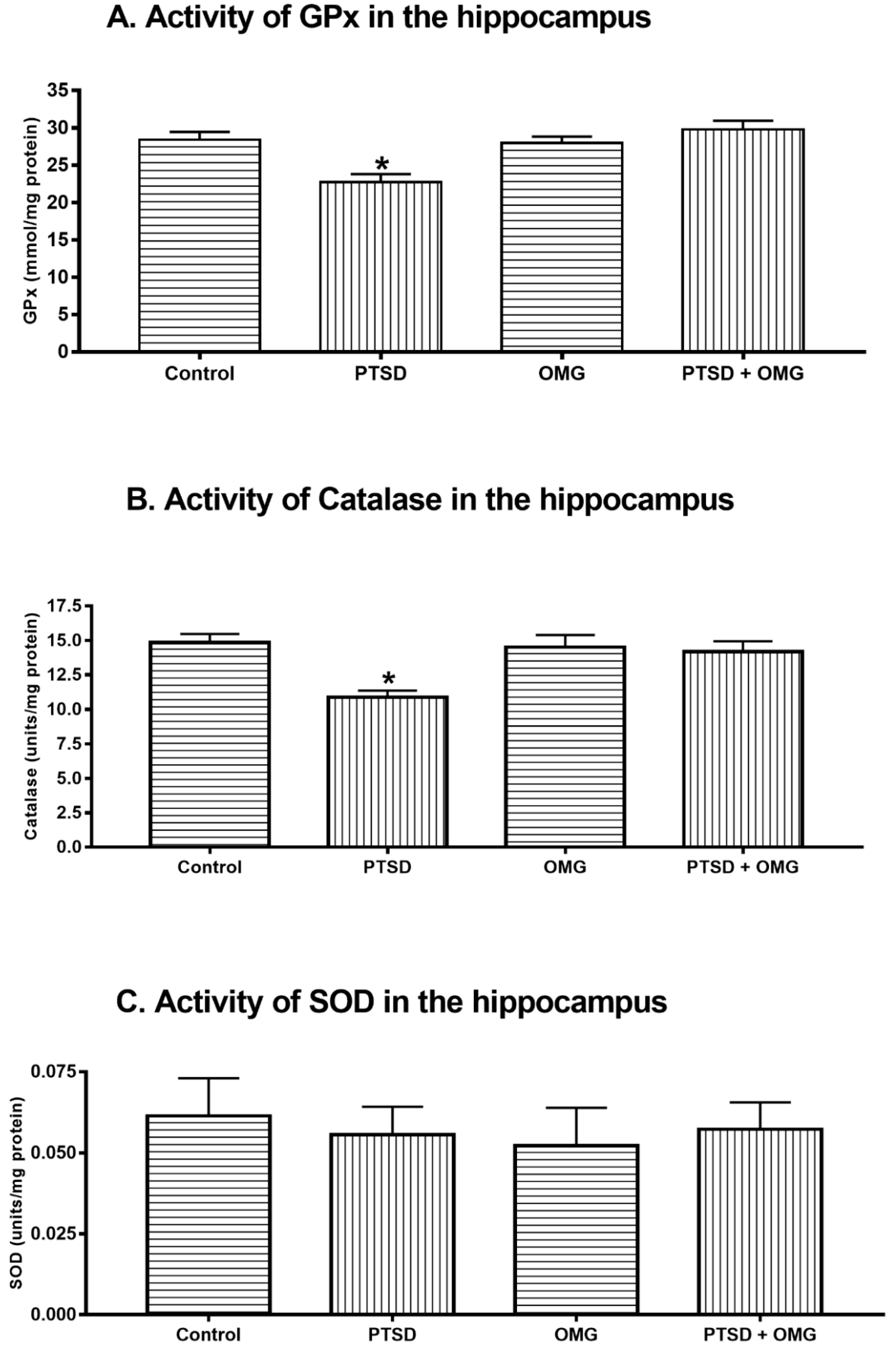