In this era of rapid technological development, a large number of new nanomaterials, crystalline materials, and drugs emerge every year. To determine the chemical properties of such a large number of new compounds and new drugs requires a large amount of chemical experiments, thereby greatly increasing the workload of the chemical and pharmaceutical researchers. In this regard, computing different types of topological indices has provided the insights into medicinal behaviour of several compounds and drugs [1,2]. The computation method of topological indices has proven its worth by yielding medical information of drugs with less use of chemical-related equipment [3,4].
In chemical graph theory, various graphical invariants are used for establishing correlations of chemical structures with various physical properties, chemical reactivity, or biological activity [5,6]. These graphical invariants are called topological indices of molecular graphs in this field. There is a large family of distance-based topological indices of molecular graphs in chemical graph theory. In chemistry, biochemistry and nanotechnology, distance-based topological indices of a graph are found to be useful in isomer discrimination, structure–property relationships and structure–activity relationships [7,8].
Dendrimers are synthetic polymers, of diverse initiator core, branches and the peripheral groups have been extensively synthesized in the last two decades [9]. Numerous kinds of experiments have proven that these polymers with well-defined structures and topological architectures exhibited an array of applications in medicine [10]. In these times, dendrimers are inviting the interest of a great number of researchers because of their remarkable physical and chemical properties and the wide range of promising applications in different fields [11,12,13]. Until now, the study of the eccentricity based topological indices for special chemical and nanostructures has been largely limited. Thus, we have been attracted to studying the mathematical properties of the eccentricity based topological indices and their polynomial versions of a class of dendrimers.
Now, we introduce some notations and definitions, which will be needed throughout this monograph. In a theoretical chemistry setting, chemical compounds are expressed as graphs. Let be a molecular graph, where , and appear for the vertex and edge set, respectively. Vertices of G correlate with the atoms, and edges correspond to the chemical bonds between atoms. In a graph G, if two vertices s and t are end vertices of an edge , then they are called adjacent, and we write this edge as or . For a vertex t, the set of neighbor vertices is denoted by and is defined as . The degree of a vertex is represented by and is expressed as the number of edges connecting it. Let denote the sum of the degrees of neighboring vertices of vertex t, which is . A -path on n vertices is defined as a graph with vertex set and edge set . The distance between two vertices is represented by and defined as the length of the shortest -path in G. For a given vertex , the eccentricity is defined as the maximum distance between t and any other vertex in G.
The history of topological indices goes back to 1947, when Harold Wiener put forward the study of first distance-based topological index, known as Wiener index [14]. Sharma, Goswami, and Madan [15] initiated the study of another distance-based topological index, termed as the eccentric connectivity index, of the graph G, described as
which has been employed usefully for the buildup of various mathematical models for the prediction of biological activities of distinct nature. Some applications and mathematical properties of this index have been discussed by several authors [16,17,18,19]. For a graph G, Ashrafi and Jalali extended the study of the eccentric connectivity index by introducing the eccentric connectivity polynomial in [20]:
If we consider only the eccentricity of the vertices, then we obtain the total eccentricity index of the graph G, which is expressed as follows:
For a graph G, the polynomial version of the total eccentricity index is described by Ashrafi et al. [20]:
Ghorbani and Hosseinzadeh in [21] presented the first Zagreb index of a graph G in terms of eccentricity by replacing the vertex degrees with the vertex eccentricities in the following way:
Gupta, Singh and Madan [22] introduced the augmented eccentric connectivity index of a graph G, as a generalization of the eccentric connectivity index as follows: where represents the product of degrees of all neighbors of vertex t. Various properties of this index have been examined in previous articles [23,24,25]. For a graph G, the modified versions of eccentric connectivity index and polynomial are defined as follows:
Several mathematical and chemical properties of these modified versions have been studied [4,20]. For detailed results on the topological indices of graphs, the readers may refer to the previous reports [26,27,28,29,30,31,32,33]. As the porphyrin has unique photofunctional properties, such as a fluorescence emission, large absorption cross-section, and photosensitizing properties; so porphyrin dendrimers can be used as photofunctional nano-devices. The high solubility of porphyrin dendrimers permits their use in photodynamic therapy, a promising technology for fewer invasive cancer treatments [34]. In this paper, we will study the different topological indices and polynomials of the molecular graph of porphyrin-cored -bis (methylol) propionic acid dendrimers. Figure 1 depicts the molecular graph of the porphyrin-cored -bis (methylol) propionic acid dendrimer with the fourth growth stage. The synthesis and characterization of this dendrimer are described by Vestberg et al. (see [35]).

2. The Eccentricity-Based Indices and Polynomials for the Molecular Graph

With the remarkable growth in the field of computer technology and accompanied by the introduction of the utilization of it in pharmacology, chemistry, and biology, a set of methodologies like quantitative structure–activity relationship and quantitative structure-property relationships have been developed. These methodologies have been widely applied in medicinal chemistry for the interpretation of many chemical and biological processes. In this paper, by molecular structure analysis, eccentricity calculating and mathematical derivation, we have computed the precise values of different versions of eccentric connectivity indices and their corresponding polynomials for a class of porphyrin-cored dendrimers. The theoretical formulations obtained in our work illustrate the promising prospects of their application for the pharmacy and chemical engineering.

This work was supported in part by the National Natural Science Foundation of China (no. 11761083). 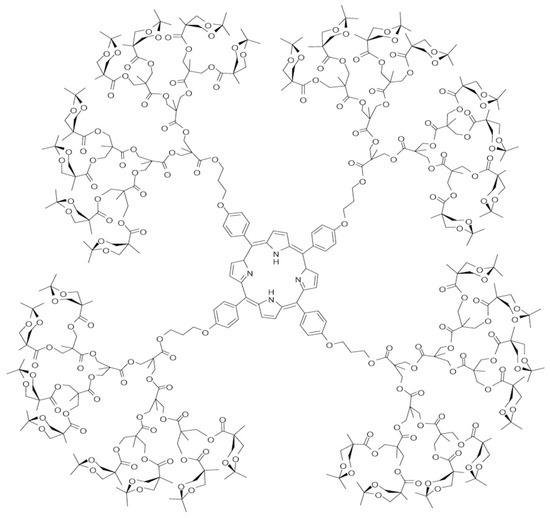 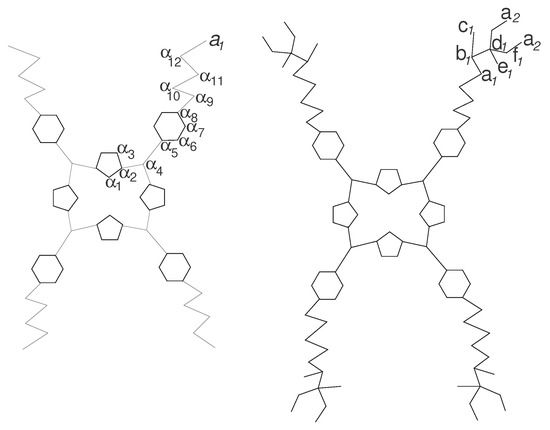