Microbial endocrinology refers to the ability of microorganisms to produce, recognize, and respond to neurochemicals that originate either in within these microorganisms themselves or within the host they inhabit [1,2]. In addition, the term neurochemical defines any chemical produced by microorganisms that is equally recognized and functions as a neurotransmitter and/or neuromodulator and neurohormone within the mammalian host system [2,3]. These neurochemicals are mainly low molecular-weight, first-messenger molecules that include amino acids and amino acid derivatives i.e., catecholamine (dopamine (DA)) and indols (serotonin (5HT)) and their respective downstream products. Therefore, neurochemicals are pivotal for cell–cell signaling, which is essential for the normal functioning of the nervous, endocrine, immune, and neuroimmune systems of the host [4].
It is perhaps a well-established fact that microorganisms have evolved specific systems for sensing these neurochemicals produced within the host during the physiological response to infection-mediated stress [2,5,6]. Furthermore, neurochemicals can be exploited by infectious microbes as an environmental signal to initiate cellular processes, including growth, and the elaboration of virulence-associated factors leading to the activation of pathogenic processes, which ultimately results in the progression of infection [5,6,7,8,9,10,11,12,13].
An extensive literature search revealed that experimental investigations focusing on neuroactive neurochemicals have been confined to bacteria, mainly on Escherichia coli O157:H7, E. coli K-12, Pseudomonas aeruginosa, Salmonella enterica, Yersinia enterocolitica, Myxobacterium polyangium, Streptococcus faecalis, Bacillus cereus, lactic acid bacteria, bifidobacteria, and gut microbiota [8,9,10,11,12,13,14,15,16,17,18,19,20,21,22], as well as a few eukaryotic microorganisms i.e., Rhodospirillum rubrum, Candida guilliermondii, and Saccharomyces cerevisiae [15,16,17]. However, no consideration has been given to the neuropathogenic microbes which are at present known producers of oxidative stress in a host during the infection course, thus affecting cardinal responses of the host [23,24,25,26,27,28,29]. Therefore, contrary to previous research, we focused on screening the biochemical potentials of neuropathogenic bacteria expressed in response to neurochemicals provided in growth media as nutrients.
Most of the media used today, especially enriched media, are largely of animal origin and contain highly undefined source materials as nutrients i.e., brains, hearts, and yeast of mammalian and eukaryotic origin, respectively [2,30]. Thus, this provides strong evidence that microbiological media may contain variable amounts of substrates, cofactors [2], and amino acid precursor molecules that can be used by these neuropathogens to either produce or convert provided nutrients into neuroactive neurochemicals that may significantly interfere with the host neurophysiological system.
Therefore, the present study was designed to investigate the biochemical potentials of neuropathogenic bacteria grown in microbiological media i.e., Luria basal broth (LB), Nutrient broth (NB), Brain Heart Infusion broth (BHI), and human serum-supplemented RPMI 1640 medium (RPMI) containing nutrients of diversified origin. In particular, biogenic amine-derived conversion was investigated in spent culture media of B. cereus (Bc), Clostridium tetani (Ct), Listeria monocytogenes (Lm), and Neisseria meningitidis (Nm).

This experiment was delineated to evaluate the bioconversion of tyrosine amino acid to neuroactive neurochemical i.e., dopamine (DA) provided in different nutritional models consisting of LB, NB, BHI, and PRMI media by neuropathogenic bacteria. Figure 1 depicts the high performance liquid chromatography with electrochemical detection (HPLC-EC) quantification profile of DA. It is noteworthy to mention herein that Bc significantly (p < 0.05) utilized tyrosine and converted into DA in all the nutritional background. Ct, in contrast, yielded a significant (p < 0.05) amount of DA in all nutritional backgrounds. Furthermore, Lm showed a slight conversion (p < 0.05) of tyrosine into DA. On the other hand, Nm revealed a significant (p < 0.05) production of DA in all media used in present study.

Another set of experiments was conducted to detect the bioconversion of DA degradation intermediate 3,4-dihydroxyphenylacetic acid (DOPAC). It is significant to note that all the neuropathogenic bacteria i.e., Bc, Ct, Lm, and Nm significantly (p < 0.05) produced this intermediate in all nutritional models. In addition, quantification of DOPAC in Ct SCFB prepared in NB revealed significant (p < 0.05) bioconversion (Figure 1B).

Next, the evaluation of homovanillic acid (HVA) was carried out in nutritional model of spent bacterial cultures of Bc, Ct, Lm, and Nm. Bc significantly carried out the downstream degradation of DA and produced a significant (p < 0.05) amount of HVA in all media (Figure 1C). Ct, on the other hand, showed significant (p < 0.05) conversion of tyrosine into HVA in all media except in BHI, which showed a negligible amount of HVA (Figure 1C). Moreover, Nm showed a profound yield (p < 0.05) of HVA in NB, whereas the rest of the media were found yield a moderate conversion (p < 0.05) of this neuroactive neurochemical as compared to NB. In addition, Lm showed moderate production (p < 0.05) of HVA in all nutritional models. These results highlight that the complete degradation of DA into HVA is not possible in Lm.

The study reported herein was carried out with neuropathogens of bacterial etiology i.e., B. cereus, Cl. tetani, N. meningitides, and L. monocytogenes isolated and identified in our lab during another study reported elsewhere [43].

Bacteriological growth media varying from simple to enriched nutrients were selected and used for conducting these experiments. In particular, LB, NB, BHI, and RPMI were used for the growth of neuropathogenic bacteria (Table 1). These media contain the nutrients of mammalian and eukaryotic origin.

In order to prepare filter-sterilized, cell-free cultural broth (SCFB), all of the abovementioned bacterial species, i.e., Lm, Nm, Ct, and Bc, were grown separately to give confluent growth via inoculating a single colony of each in 100 mL of NB, LB, BHI, and RPMI (10 mL) for 24 h at 37 °C. Anaerobic conditions were maintained by providing 5% CO2. After incubation, each of the cultural broth samples was centrifuged at 3200 g for 10 min; pellet was discarded and each supernatant was separately air-dried overnight at ambient temperature. Dried broth was scraped off by adding 2 mL of distilled water Each SCFB was filter-sterilized using a 0.2-micron membrane Millipore filter. SCFBs were marked as Lm, Nm, Ct, and Bc. Blank broth i.e., without bacterial inoculation of each of the above mentioned media, were air-dried and filter-sterilized as well, to serve as control SCFBs. All of the experimental procedures were run in triplicate.

Sterility of all the SCFBs was determined prior to HPLC-EC. Ten microliters of each SCFB was separately streaked on nutrient agar plates. SCFBs that did not yield any bacterial growth after overnight incubation at 37 °C were used for carrying out experiments. Sterility was maintained throughout this study.

The HPLC-EC system consisted of a Dionex ED50 electrochemical detector, a glassy carbon working electrode, 5 μm octadeclysilane (ODS) reverse phase, 250 × 4.6 mm, C-18 column, and Chromeleon v.6.8.0 software. The column buffer was consisted of 0.1 M NaH2PO4, 0.1% octyl sodium sulphate, 0.0035% ethylenediaminetetraacetic acid (EDTA), and 14% methanol (pH 2.9 adjusted with phosphoric acid). The flow rate of the pump (Dionex Ultimate 3000) was 1 mL/min. The sensitivity of the detector was 1.0 nA and the potential of the working electrode was 0.6 V. Twenty-five microliters of supernatant was injected into the HPLC-EC system. The peak areas generated from the supernatants were recorded and quantified by comparison with external standards containing 100 ng/mL of DA, DOPAC, HVA, 5HIAA, and 200 ng/mL of 5HT.

The authors are thankful to the Higher Education Commission, Islamabad (HEC), Pakistan for providing financial assistance in the form of the Indigenous Ph.D. Fellowship program for carrying out this study.

Conceived and designed the experiments: N.J. Collection of the samples: A.T. Experimental work: A.T. Analysis of the data and discussion: A.T., N.J. Writing of the manuscript: A.T. All authors read and approved the final manuscript. 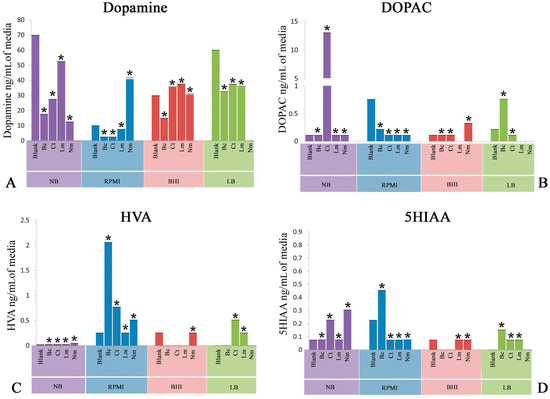 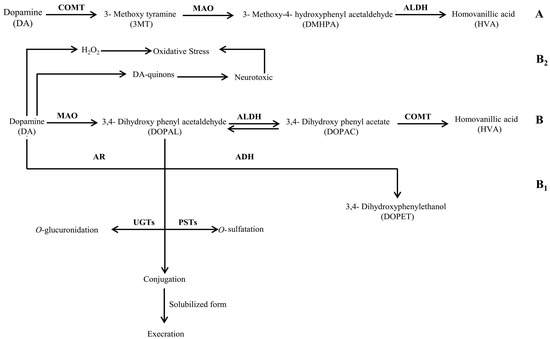