Role of Transcription Factors in Steatohepatitis and Hypertension after Ethanol: The Epicenter of Metabolism

Ethanol or ethyl alcohol (C2H5OH) is a fermentation product of grain, fruit juice and honey, etc. and has been used by humans for a long time. In fact, early Egyptians, Chinese in around 7000 BC, Indian between 3000 and 2000 BC, Babylonians as early as 2700 BC and Greeks and South Americans have used fermented beverages and alcoholic drinks [1]. Spirits, a form of alcohol containing methanol and iron, were used largely for medicinal purposes in sixteenth century [2]. In the UK, at the beginning of the eighteenth century, spirits were heavily used. During the nineteenth century, a change in practice led to a movement away from heavy ethanol dependence toward moderate application of ethanol. In 1920, the US passed a law banning manufacturing, sale, import and export of intoxicating liquors. A divergent view on the beneficial and harmful effects of ethanol use exists among scientist and researchers. Current and past research suggests that moderate alcohol intake is beneficial to the cardiovascular system and lowers blood pressure while excessive use is harmful to the cardiovascular system and causes elevation in blood pressure. Low to moderate alcohol use has been linked to decreased incidence of coronary heart disease and increase in longevity [3,4]. It has been used as an analgesic and widely available to individuals in pain [2,5]. Experiments with rats in preclinical studies showed a decrease in systolic blood pressure of 1.0 g/Kg for 12 weeks [6]. Moderate drinking is defined as two drinks per day for younger men, and one drink for men over 65 and women of all ages. As an example, a drink is defined as 12 ounces, i.e., 355 millimeters of beer, 5 ounces or 148 milliliters of wine or 1.5 ounces (44 mL) of 80-proof distilled spirits.
Today, alcohol and alcoholic beverages are used more often and have become part of human society. Due to its easy availability, excessive and chronic use has created major public health crises worldwide. In US alone, alcohol abuse affects more than 20 million individuals and causes over 100,000 deaths annually [7,8]. Chronic ethanol usage causes liver, gastrointestinal, nervous and cardiovascular toxicities [9]. In this review, we will focus our attention on alcoholic liver disease and elevation in blood pressure with emphasis on the ethanol [3,4] metabolism and activation of transcription factors induced steatosis and steatohepatitis. Additionally, we will focus on alcohol-mediated hypertension especially of the renin-angiotensin-aldosterone system (RAAS), which is reviewed in detail by K. Husain et al. [10].

Ethanol is extensively metabolized to acetaldehyde by the enzyme alcohol dehydrogenase and acetaldehyde is further oxidized to acetate by acetaldehyde dehydrogenase/oxidase in the liver, which may lead to the generation of reactive oxygen species (ROS). On the other hand, chronic high-dose ethanol ingestion induces hepatic microsomal cytochrome P450 II E1 leading to generation of 1-hydroxy ethyl radical [88,89]. These ROS oxidize cellular DNA, RNA and proteins and initiate membrane lipid peroxidation leading to production of inflammatory mediators and the depletion of the antioxidant defense system causing cellular oxidative stress [90,91]. Controlling the level of ROS levels is linked to cytoprotection and cell survival. Induction of cytoprotective enzymes in response to increased ROS levels is regulated at transcriptional level. This transcriptional response is mediated by cis-acting element in the promoter regions of cytoprotective genes, which is referred to as antioxidant response element (ARE). Initially, ARE sequences were defined with two detoxifying enzymes, glutathione S-transferase A2 and NADPH:quinone oxidoreductase [92]. In addition to transcriptional activation of genes, ARE-mediated regulation is also responsible for low-level basal or constitutive expression of several other genes unrelated to oxidative stress. Activation of genes via ARE involves the binding of nuclear factor erythroid-2-related factor-2 (Nrf2). Nrf2 resides in cytoplasm in an inactive form and, upon activation by ROS, translocates to the nucleus to activate genes from ARE [93,94]. Activation of Nrf2 is observed with ethanol exposure [95,96]. Nrf2 knockout mice exposed chronically with alcohol exhibited increased mortality compared with control. The toxic metabolite, acetaldehyde, level was increased due to decreased acetaldehyde metabolism in Nrf2 knockout mice chronically fed with alcohol [97]. In addition, steatosis and inflammation mediated by Kupffer cells was observed after ethanol exposure to Nrf2 knock out mice.
Alcohol exposure causes HIF-1α activation and CYP2E1 potentiates HIF-1α activation in vivo [98,99]. Activation of hypoxia-inducible transcription factor (HIF) is being observed in hypoxic and increased ROS state [100]. A number of genes linked to various cell activities have been found to be upregulated by HIF. HIF binds to the hypoxia response element (HRE) after localization to the nucleus. A genome-wide search for the sequences around HRE indicated no requirement for specific sequences around HRE. It has been observed in studies of HRE elements in the promoter regions of various genes regulated by HIF that HRE is predominantly found in −500 bps regions [101]. Oxidative stress, especially ROS can activate HIF [100]. In addition to direct interaction with HRE sequences, HIF interacts with other transcription factors to regulate the gene transcription. Acute and chronic ethanol feeding to mice results into increased hepatic HIF-1α and HIF-2α [102]. The role of HIF-1α in liver steatosis and inflammation is controversial. Opposing results with HIF-1α hepatocyte-specific knockout mice had been observed with 6% ethanol exposure for 4 weeks. In one study, ethanol caused increased steatosis compared to control while in another study, mice were protected [102,103,104].
Another family of transcription factor, forkhead box, class O (FoxO) plays a critical role in antioxidant and liver cell death responses. Mammals possess four FoxO family members, which includes FoxO1, FoxO3, FoxO4 and FoxO6 [105]. The activity of FoxO is regulated by redox, especially the ROS level, which includes posttranslational modification. It has been demonstrated that FoxO3 possesses pro-apoptotic function in hepatocytes exposed to excessive oxidative stress [106]. In addition, nutrient deprivation-mediated activation of AMPK causes FoxO3 activation specific phosphorylation [107]. In addition, acute ethanol treatment results in FoxO3 retention in the nucleus after Akt-dependent phosphorylation [108]. Due to its regulation by ROS and phosphorylation mediated activation, the toxicity of ethanol was evaluated in FoxO3-deficient mice. The FoxO3-deficient mice developed hepatosteatosis, steatohepatitis and liver necrosis as evidenced by increased alanine aminotransferase level in blood [109]. Another transcription factor, activator protein-1 (AP-1), is activated in rat liver sinusoidal cells and human endothelial cells by short term ethanol exposure. Chronic alcohol exposure in rats also enhanced AP-1 activity [110]. Activated AP-1 increases expression of RANTES and can contribute to ethanol-mediated inflammation [111].

Chronic alcohol exposure is linked to hypertension while moderate drinking is linked to beneficial effects such as improvement in cardiovascular risk factor, including high-density lipoprotein cholesterol and inhibitors of thrombosis. Continued consumption of more than 2 servings of ethanol (30–50 g) results in a dose-dependent rise in blood pressure. However, acute exposure causes a modest fall in blood pressure [112]. Heavy alcohol consumption (>2 drinks daily) has been shown to be associated with hypertension [113,114,115].
The mechanism of alcohol-mediated hypertension is obscure. The possible mechanism includes but is not limited to an imbalance of the central nervous system, impairment of the baroreceptor, an increase in sympathetic activity, stimulation of the endothelium to release endothelin, inhibition of endothelium-dependent nitric-oxide production and stimulation of the rennin-angiotensin-aldosterone system, etc. [116]. Lowering of the alcohol-induced hypertension in rats has been obtained by dexamethasone treatment, which abrogates activation of the sympathetic nervous system responsible for releasing corticotrophin-releasing hormone [117]. In another study, an ethanol-induced increase in circulating vasopressin in experimental rats has been implicated in hypertension [118]. Antihypertensive drugs antagonizing renin and angiotensin II binding to its type I receptor are shown to offer protection against alcohol-induced responses in cultured human endothelial cells, suggesting the possible involvement of renin-angiotensin-aldosterone system (RAAS) [119].
The renin-angiotensin-aldosterone system (RAAS) plays a significant role in the regulation of blood pressure. The octapeptide, angiotensin-II (Ang II) is a potent vasopressor molecule released by proteolytic cleavage of the precursor molecule, angiotensinogen (AGT) by renin and angiotensin-I converting enzyme (ACE). The source of circulating AGT is primarily the liver. The inhibition of renin-angiotensin system in experimental animals and clinical studies has proven to be effective in lowering blood pressure in hypertension. The circulating plasma concentration of AGT is close to the Michaelis-Menten (Kd) constant of the aspartyl protease, renin [120]. Therefore, alterations in circulating AGT level can cause corresponding changes in blood Ang-II levels. A rise in blood AGT levels will lead to a parallel increase in the formation of active peptides. Increased levels of Ang-II have been shown to cause hypertension. Recent studies in this field have demonstrated a direct link between blood AGT level and blood pressure [121]. Higher blood AGT levels have been demonstrated in hypertensive subjects and their off springs as compare to normotensives [122]. Expression of RAS in multiple body organs, such as kidney, heart, placenta, brain and adrenals are examples of organ-specific blood pressure regulation [123]. Overexpression of human AGT in transgenic animals results in blood pressure elevation, while AGT gene knockout reduces blood pressure in mice [124]. Increasing the copy numbers of AGT in mice results in successive increases in blood pressure [125]. Expression of antisense AGT mRNA causes a profound reduction in blood pressure in hypertensive rats [126]. These studies demonstrate that changes in blood AGT level can quantitatively alter blood pressure. Similar studies duplicating angiotensin-I converting enzyme (ACE) gene in mice led to an increase in blood ACE level, but no quantitative change in blood pressure [127]. Therefore, human studies and experimental models support the role of AGT in human hypertension.
The effect of alcohol exposure on human angiotensinogen levels is not known. However, it has been observed that chronic alcohol exposure followed by binge alcohol exposure causes increased mRNA levels of AGT in mice [128]. Increased levels of mRNA of AGT in mice have been observed in HIGA mice (high immunoglobulin A transgenic mice), which possess increased ROS levels [129]. Formation of increased Ang II can be anticipated from increased synthesis and secretion of angiotensinogen. Recent studies have demonstrated a significant increase in blood and aortic angiotensin II levels after alcohol exposure to rats [130,131]. Prolonged elevation of serum angiotensin converting enzyme (ACE) activity in alcoholics suggests elevated angiotensin II levels due to activation of ACE activity [132]. Sustained RAAS activation with progressive increases in plasma angiotensin II levels, renin activity, left ventricular ACE activity, and left ventricular myocyte Ang II and AT1 receptor expression in dogs have been observed with alcohol exposure [133]. The studies from our laboratory have indicated increased angiotensinogen synthesis and secretion from human hepatocytes after ethanol exposure [134,135]. The mechanism involving RAAS is more likely implicated in alcohol-induced hypertension.

Indeed, the metabolic products of ethanol (acetaldehyde and ROS) activate the transcription factors such as NF-κB, HIF and AP-1. Activation of NF-κB in turn leads to activation of the macrophages and Kuppfer cells of the liver. The liver lipogenic program may be activated via SREBPs, which are also activated in ethanol exposure. Established research indicates that the transformation of the liver towards lipid accumulation may occur due to SREBP and possibly other liver-specific transcription factors including PPARα whose activity is decreased resulting into decreased fatty acid utilization.

Rais A. Ansari contributed primarily to the article. Kazim Husain collected data and contributed to the alcohol-mediated hypertension. Syed A. Rizvi contributed to knockout models of alcohol toxicity and organization of the review. 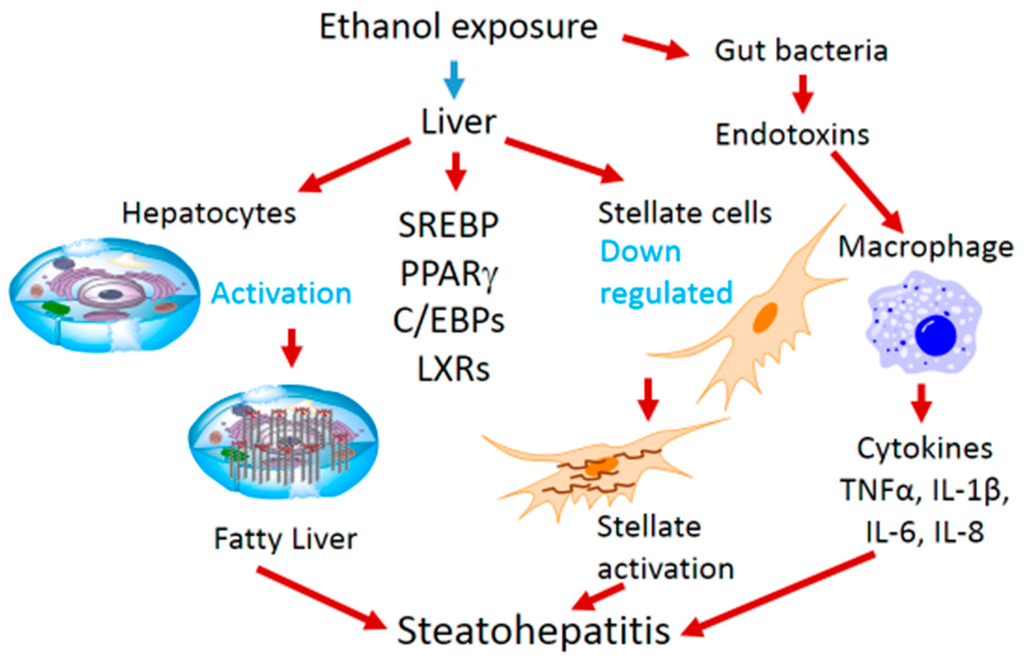 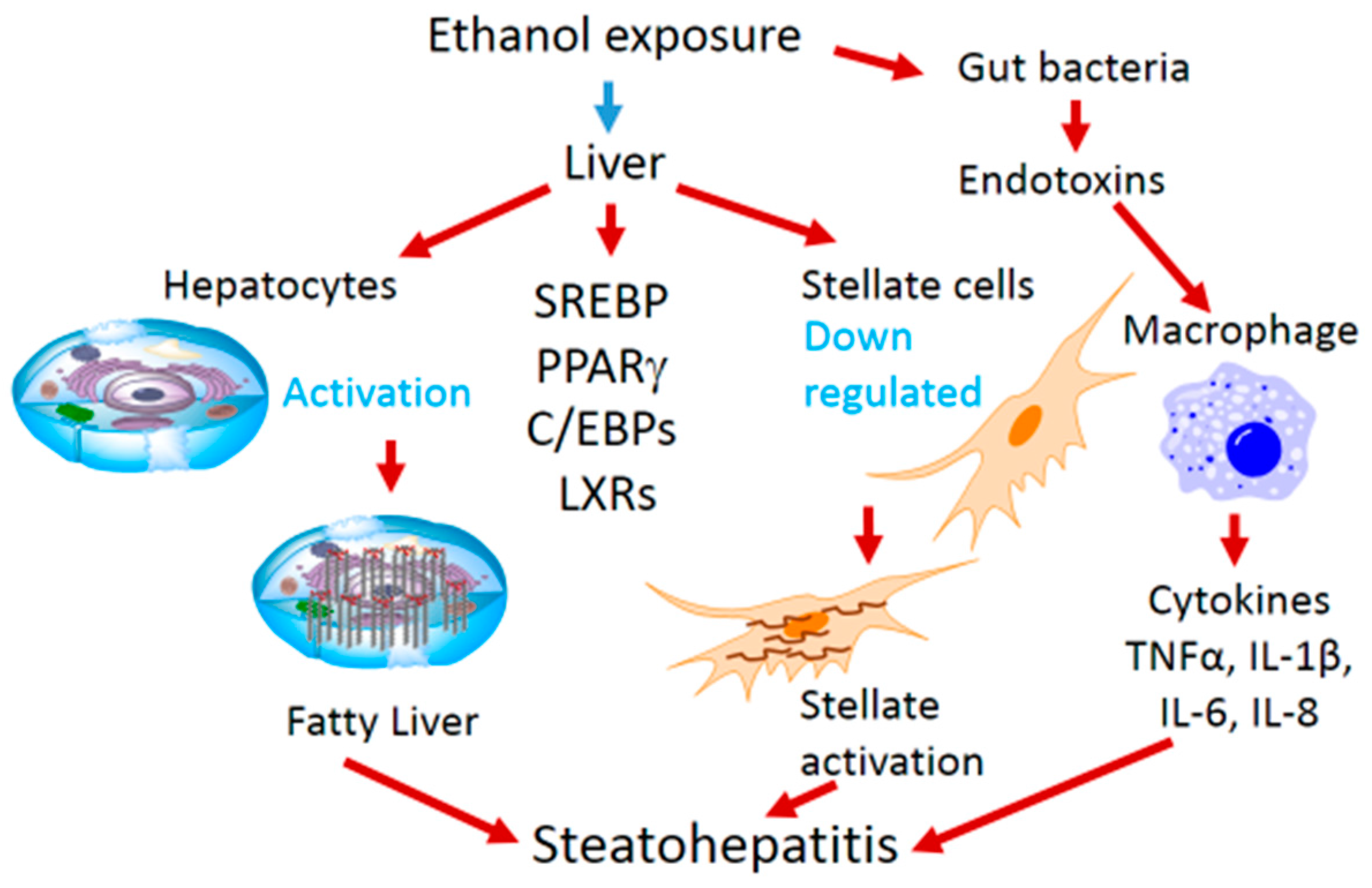