Role of Transcription Factors in Steatohepatitis and Hypertension after Ethanol: The Epicenter of Metabolism
Previous Article in Special Issue

The Diversity of Ribonuclease P: Protein and RNA Catalysts with Analogous Biological Functions

RNase P, the essential activity that performs the 5′ maturation of tRNA precursors, can be achieved either by ribonucleoproteins containing a ribozyme present in the three domains of life or by protein-only enzymes called protein-only RNase P (PRORP) that occur in eukaryote nuclei and organelles. A fast growing list of studies has investigated three-dimensional structures and mode of action of PRORP proteins. Results suggest that similar to ribozymes, PRORP proteins have two main domains. A clear functional analogy can be drawn between the specificity domain of the RNase P ribozyme and PRORP pentatricopeptide repeat domain, and between the ribozyme catalytic domain and PRORP N4BP1, YacP-like Nuclease domain. Moreover, both types of enzymes appear to dock with the acceptor arm of tRNA precursors and make specific contacts with the corner of pre-tRNAs. While some clear differences can still be delineated between PRORP and ribonucleoprotein (RNP) RNase P, the two types of enzymes seem to use, fundamentally, the same catalytic mechanism involving two metal ions. The occurrence of PRORP and RNP RNase P represents a remarkable example of convergent evolution. It might be the unique witness of an ongoing replacement of catalytic RNAs by proteins for enzymatic activities. View Full-Text
Keywords: tRNA biogenesis; RNase P; PRORP; crystal structures; kinetic analyses tRNA biogenesis; RNase P; PRORP; crystal structures; kinetic analyses
►▼ Show Figures 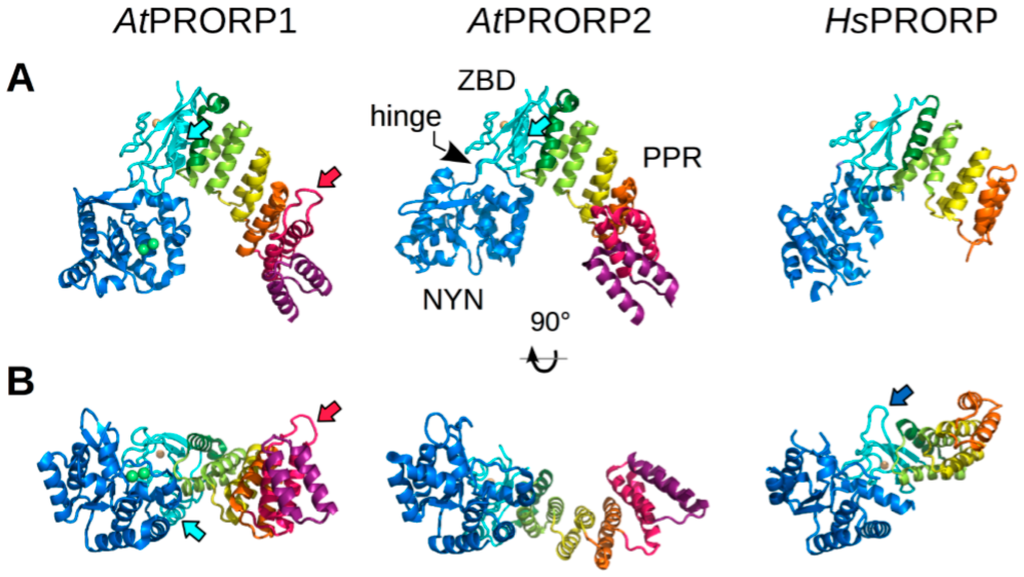