Bio-Assisted Synthesis and Characterization of Zinc Oxide Nanoparticles from Lepidium sativum and Their Potent Antioxidant, Antibacterial and Anticancer Activities
Previous Article in Journal

Cholangiocarcinoma (CCA) is a rare and highly lethal disease with few effective treatment options. Cannabinoids, cannabidiol (CBD) and cannabigerol (CBG) are non-psychedelic components extracted from cannabis. These non-psychoactive compounds have shown anti-proliferative potential in other tumor models; however, the efficacy of CBD and CBG in CCA is unknown. Furthermore, two cell death pathways are implicated with CBD resulting in autophagic degeneration and CBG in apoptosis. HuCC-T1 cells, Mz-ChA-1 cells (CCA cell lines) and H69 cells (immortalized cholangiocytes), were treated with CBD and CBG for 24 to 48 h. The influence of these cannabinoids on proliferation was assessed via MTT assay. Apoptosis and cell cycle were evaluated via Annexin-V apoptosis assay and propidium iodide, respectively. The expression of proliferation biomarker Ki-67, apoptosis biomarker BAX, and autophagic flux biomarkers LC3b and LAMP1 were evaluated via immunofluorescence. Cell migration and invasion were evaluated via wound healing assay and trans-well migration invasion assays, respectively. The colony formation was evaluated via colony formation assay. In addition, the expression of autophagy gene LC3b and apoptosis genes BAX, Bcl-2, and cleaved caspase-3 were evaluated via Western blot. CBD and CBG are non-selective anti-proliferative agents yielding similar growth curves in CCA; both cannabinoids are effective, yet CBG is more active at lower doses. Low doses of CBD and CBG enhanced immortalized cholangiocyte activity. The reduction in proliferation begins immediately and occurs maximally within 24 h of treatment. Moreover, a significant increase in the late-stage apoptosis and a reduction in the number of cells in S stage of the cell cycle indicates both CBD and CBG treatment could promote apoptosis and inhibit mitosis in CCA cells. The fluorescent expression of BAX and LC3b was significantly enhanced with CBD treatment when compared to control. LAMP1 and LC3b colocalization could also be observed with CBD and CBG treatment indicating changes in autophagic flux. A significant inhibition of migration, invasion and colony formation ability was shown in both CBD and CBG treatment in CCA. Western blot showed an overall decrease in the ratio of anti-apoptotic protein Bcl-2 with respect to pro-apoptotic protein BAX with CBG treatment. Furthermore, CBD treatment enhanced the expression of Type II cell death (autophagic degeneration) protein LC3b, which was reduced in CBG-treated CCA cells. Meanwhile, CBG treatment upregulated Type I cell death (programmed apoptosis) protein cleaved caspase-3. CBD and CBG are effective anti-cancer agents against CCA, capable of inhibiting the classic hallmarks of cancer, with a divergent mechanism of action (Type II or Type I respectively) in inducing these effects. View Full-Text
Keywords: cholangiocarcinoma; cannabidiol; cannabigerol; cell death cholangiocarcinoma; cannabidiol; cannabigerol; cell death
►▼ Show Figures 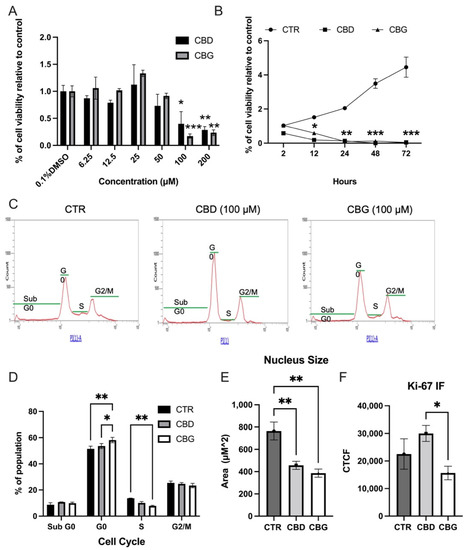