Extracellular matrix (ECM)-based bioinks have been steadily gaining interest in the field of bioprinting to develop biologically relevant and functional tissue constructs. Herein, we propose the use of supercritical carbon dioxide (scCO2) technology to extract the ECM components of cell-sheets that have shown promising results in creating accurate 3D microenvironments replicating the cell’s own ECM, to be used in the preparation of bioinks. The ECM extraction protocol best fitted for cell sheets was defined by considering efficient DNA removal with a minor effect on the ECM. Cell sheets of human dermal fibroblasts (hDFbs) and adipose stem cells (hASCs) were processed using a customised supercritical system by varying the pressure of the reactor, presence, exposure time, and type of co-solvent. A quantification of the amount of DNA, protein, and sulfated glycosaminoglycans (sGAGs) was carried out to determine the efficiency of the extraction in relation to standard decellularization methodologies. The bioinks containing the extracted ECM were fabricated by combining them with alginate as a support polymer. The influence of the alginate (1%, 2% w/vol) and ECM (0.5% and 1.5% w/vol) amounts on the printability of the blends was addressed by analysing the rheological behaviour of the suspensions. Finally, 3D printed constructs were fabricated using an in-house built extrusion-based bioprinter, and the impact of the extrusion process on cell viability was assessed. The optimised scCO2 protocol allowed efficient removal of DNA while preserving a higher number of proteins and sGAGs than the standard methodologies. The characterization of extract’s composition also revealed that the ECM produced by hDFbs (fECM) and hASCs (aECM) is distinctively affected by the extraction protocols. Furthermore, rheological analysis indicated an increase in viscosity with increasing ECM composition, an effect even more prominent in samples containing aECM. 3D printing of alginate/ECM constructs demonstrated that cell viability was only marginally affected by the extrusion process, and this effect was also dependent on the ECM source. Overall, this work highlights the benefits of supercritical fluid-based methods for ECM extraction and strengthens the relevance of ECM-derived bioinks in the development of printed tissue-like constructs. View Full-Text
Keywords: extracellular matrix; supercritical CO2; cell sheets; bioinks; 3D bioprinting extracellular matrix; supercritical CO2; cell sheets; bioinks; 3D bioprinting
►▼ Show Figures 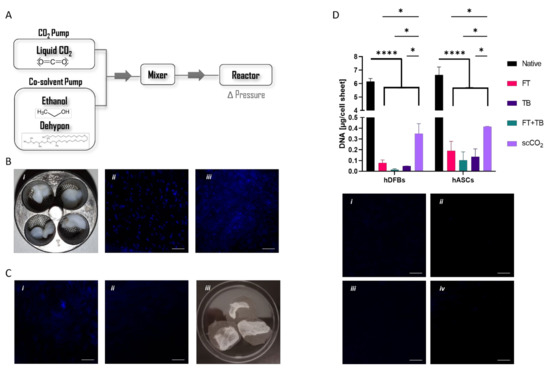