Circulating Chemerin and Its Kinetics May Be a Useful Diagnostic and Prognostic Biomarker in Critically Ill Patients with Sepsis: A Prospective Study
Previous Article in Journal

Understanding the Role of the Gut Microbiome and Microbial Metabolites in Non-Alcoholic Fatty Liver Disease: Current Evidence and Perspectives

Afamin Levels and Their Correlation with Oxidative and Lipid Parameters in Non-diabetic, Obese Patients

Background: Afamin is a liver-produced bioactive protein and features α- and γ-tocopherol binding sites. Afamin levels are elevated in metabolic syndrome and obesity and correlate well with components of metabolic syndrome. Afamin concentrations, correlations between afamin and vitamin E, afamin and lipoprotein subfractions in non-diabetic, obese patients have not been fully examined. Methods: Fifty non-diabetic, morbidly obese patients and thirty-two healthy, normal-weight individuals were involved in our study. The afamin concentrations were measured by ELISA. Lipoprotein subfractions were determined with gel electrophoresis. Gas chromatography–mass spectrometry was used to measure α- and γ tocopherol levels. Results: Afamin concentrations were significantly higher in the obese patients compared to the healthy control (70.4 ± 12.8 vs. 47.6 ± 8.5 μg/mL, p < 0.001). Positive correlations were found between afamin and fasting glucose, HbA1c, hsCRP, triglyceride, and oxidized LDL level, as well as the amount and ratio of small HDL subfractions. Negative correlations were observed between afamin and mean LDL size, as well as the amount and ratio of large HDL subfractions. After multiple regression analysis, HbA1c levels and small HDL turned out to be independent predictors of afamin. Conclusions: Afamin may be involved in the development of obesity-related oxidative stress via the development of insulin resistance and not by affecting α- and γ-tocopherol levels. View Full-Text
Keywords: obesity; insulin resistance; afamin; HDL subfractions; vitamin E obesity; insulin resistance; afamin; HDL subfractions; vitamin E
►▼ Show Figures 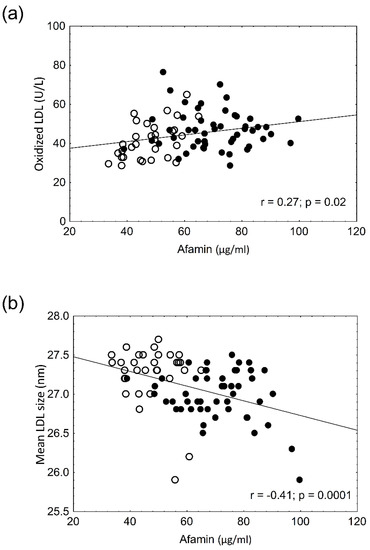