Ionotropic Glutamate Receptors in Epilepsy: A Review Focusing on AMPA and NMDA Receptors

N-methyl-D-aspartate (NMDA) receptor antagonists such as phencyclidine (PCP), dizocilpine (MK-801) and ketamine have long been considered a model of schizophrenia, both in animals and humans. However, ketamine has been recently approved for treatment-resistant depression, although with severe restrictions. Interestingly, the dosage in both conditions is similar, and positive symptoms of schizophrenia appear before antidepressant effects emerge. Here, we describe the temporal mechanisms implicated in schizophrenia-like and antidepressant-like effects of NMDA blockade in rats, and postulate that such effects may indicate that NMDA receptor antagonists induce similar mechanistic effects, and only the basal pre-drug state of the organism delimitates the overall outcome. Hence, blockade of NMDA receptors in depressive-like status can lead to amelioration or remission of symptoms, whereas healthy individuals develop psychotic symptoms and schizophrenia patients show an exacerbation of these symptoms after the administration of NMDA receptor antagonists. View Full-Text
Keywords: NMDA; depression; schizophrenia; subunit; glutamate; GABA NMDA; depression; schizophrenia; subunit; glutamate; GABA
►▼ Show Figures 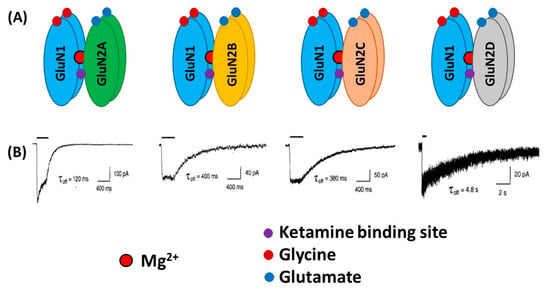 Adell, A. Brain NMDA Receptors in Schizophrenia and Depression. Biomolecules 2020, 10, 947.