Effects of the Positive Allosteric Modulator of Metabotropic Glutamate Receptor 5, VU-29, on Maintenance Association between Environmental Cues and Rewarding Properties of Ethanol in Rats
Next Article in Special Issue

The NRF2/KEAP1 Axis in the Regulation of Tumor Metabolism: Mechanisms and Therapeutic Perspectives
Previous Article in Special Issue

Antidepressant-Like Effect of Terpineol in an Inflammatory Model of Depression: Involvement of the Cannabinoid System and D2 Dopamine Receptor

Depression has a multifactorial etiology that arises from environmental, psychological, genetic, and biological factors. Environmental stress and genetic factors acting through immunological and endocrine responses generate structural and functional changes in the brain, inducing neurogenesis and neurotransmission dysfunction. Terpineol, monoterpenoid alcohol, has shown immunomodulatory and neuroprotective effects, but there is no report about its antidepressant potential. Herein, we used a single lipopolysaccharide (LPS) injection to induce a depressive-like effect in the tail suspension test (TST) and the splash test (ST) for a preventive and therapeutic experimental schedule. Furthermore, we investigated the antidepressant-like mechanism of action of terpineol while using molecular and pharmacological approaches. Terpineol showed a coherent predicted binding mode mainly against CB1 and CB2 receptors and also against the D2 receptor during docking modeling analyses. The acute administration of terpineol produced the antidepressant-like effect, since it significantly reduced the immobility time in TST (100–200 mg/kg, p.o.) as compared to the control group. Moreover, terpineol showed an antidepressant-like effect in the preventive treatment that was blocked by a nonselective dopaminergic receptor antagonist (haloperidol), a selective dopamine D2 receptor antagonist (sulpiride), a selective CB1 cannabinoid receptor antagonist/inverse agonist (AM281), and a potent and selective CB2 cannabinoid receptor inverse agonist (AM630), but it was not blocked by a nonselective adenosine receptor antagonist (caffeine) or a β-adrenoceptor antagonist (propranolol). In summary, molecular docking suggests that CB1 and CB2 receptors are the most promising targets of terpineol action. Our data showed terpineol antidepressant-like modulation by CB1 and CB2 cannabinoid receptors and D2-dopaminergic receptors to further corroborate our molecular evidence. View Full-Text
Keywords: depression; terpenoids; phytocannabinoid; cannabinoid receptor; dopaminergic receptor depression; terpenoids; phytocannabinoid; cannabinoid receptor; dopaminergic receptor
►▼ Show Figures 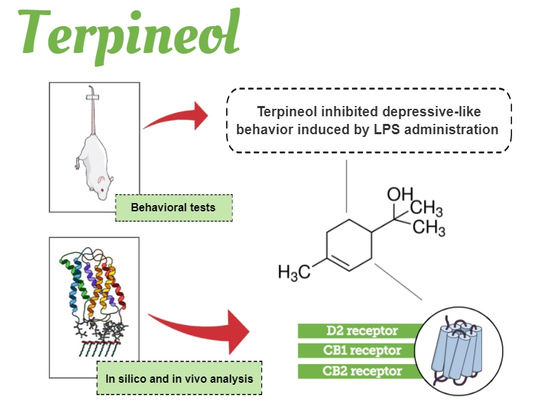