Anti-Hypochlorite, Antioxidant, and Catalytic Activity of Three Polyphenol-Rich Super-Foods Investigated with the Use of Coumarin-Based Sensors

An effective and ecological method for liberation of pectin-derived oligosaccharides (POS) from sugar beet pulp (SBP) was developed using enzymatic and microorganism-mediated biomass conversion. The POS may be applied in the production of prebiotic feed additives. Various yeast strains were screened for their capacity for protein synthesis and monosaccharide assimilation. Combined yeast cultivation and pectin hydrolysis were found to be an effective method of producing prebiotics. Separate enzymatic hydrolysis and fermentation of SBP resulted in the release of 3.6 g of POS per 100 g d.w., whereas the yield of POS acquired after the combined process was 17.9% higher, giving 4.2 g of POS per 100 g d.w. Introducing the yeast into the process improved hydrolysis performance due to lower enzyme inhibition by mono- and disaccharides. The prebiotic effect of the POS was assessed by in vitro fermentation using individual cultures of gastrointestinal bacteria. The POS in the SBP hydrolysate effectively promoted the growth of lactobacilli and bifidobacteria. A large increase in adherence to Caco-2 cells in the presence of POS was noted for beneficial Lactobacillus brevis strains, whereas pathogenic bacteria and yeast (C. albicans, C. lusitanie, C. pelliculosa), responsible for infections in breeding animals, showed much weaker adhesion. View Full-Text
Keywords: pectin-derived oligosaccharides (POS); prebiotics; sugar beet pulp; animal feed pectin-derived oligosaccharides (POS); prebiotics; sugar beet pulp; animal feed
►▼ Show Figures 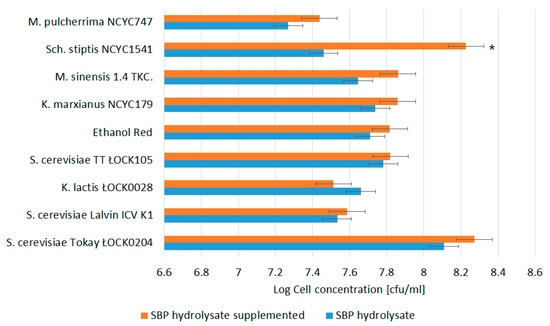