The Mediterranean fruit fly, Ceratitis capitata (Wiedemann) (Diptera: Tephritidae) poses a major threat to fruit and vegetable production in the United States and throughout the world. New attractants and detection methods could improve control strategies for this invasive pest. In this study, we developed a method that combined thin-layer chromatography (TLC) of tea tree essential oil (TTO) (Melaleuca alternifolia) with short-range bioassays to isolate attractive kairomones for male C. capitata. After development, the TLC chromatogram indicated that TTO separated into five major spots, designated as zones 1 to 5. When the TLC plate was exposed to flies, zones 1 and 3 were strongly attractive to male C. capitata. To confirm activity, the developed TLC plate was cut into five zones which were then tested in short-range bioassays. Again, flies were observed to aggregate around zones 1 and 3, which corresponded with Rf values of 0.93 and 0.59. In addition, zones 1 to 5 were separated using preparative-TLC, and olfactory responses to volatile emissions from the five fractions were quantified by electroantennography (EAG). Highest amplitude EAG responses were recorded with fractions 1 and 3, further supporting the bioactivity of these samples. In conclusion, a TLC-based bioassay system can provide an effective, rapid screening protocol for initial isolation of insect kairomones from complex mixtures such as essential oils or plant extracts. Further analysis of TTO fractions 1 and 3 is needed to identify the specific constituents attractive to male C. capitata. View Full-Text
Keywords: invasive insect pest; semiochemicals; attractant; thin-layer chromatography; terpinen-4-ol; α-terpineol; electroantennography invasive insect pest; semiochemicals; attractant; thin-layer chromatography; terpinen-4-ol; α-terpineol; electroantennography
►▼ Show Figures 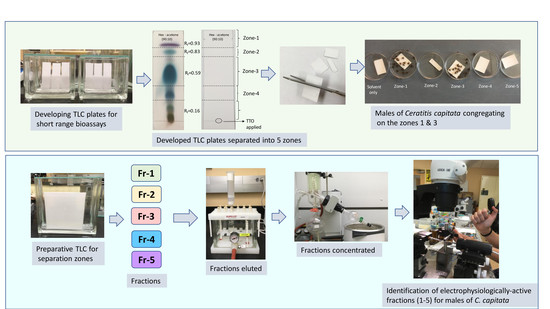