Comparative Study of Time-Resolved Fluorescent Nanobeads, Quantum Dot Nanobeads and Quantum Dots as Labels in Fluorescence Immunochromatography for Detection of Aflatoxin B1 in Grains
Previous Article in Special Issue

First introduced in peptide chemistry, bifunctional ncAAs were recently made available for genetic code expansion in live cells. The following paragraph highlights the main representatives of this class and discusses their specific advantages and applications (Figure 2 and Table 1).

The first genetically encoded bifunctional ncAA for photo-crosslinking and click chemistry was reported by Yamaguchi et al. from the Sakamoto lab [30]. AmAzZLys (Nε-(3-amino-5- azidobenzyloxycarbonyl)-L-lysine; Figure 2) is a derivative of Z-lysine with a benzyl group attached to the lysine side chain via a carbamate. Attached to the benzyl ring in the meta positions are an azide group and an amine. As a pyrrolysine analog, this ncAA can be incorporated with a modified pyrrolysine-synthetase from Methanosarcina mazei with the mutations R61K, G131E, Y306A, and Y384F. The aromatic azide acts as a photo-crosslinker, while the amine can be labeled via reductive alkylation. The latter reaction does not meet the strict criteria of click chemistry as it is not fully bioorthogonal, but under the right conditions in a pre-processed sample, the labeling will only occur at the phenylamine and not on other lysines or the N-terminus. The aromatic azide requires a long irradiation time of 30 min in the near UV, which generally limits its use to in vitro experiments. Still, Yamaguchi et al. have demonstrated the successful crosslinking between a nanobody and a receptor, and the subsequent fluorescent labeling of the product. One advantage of AmAzZLys is the flexibility outside of photo-crosslinking chemistry—the azide can be used for an orthogonal one-pot bioconjugation reaction to create a double-labeled nanobody [30,31].

Benzophenone-alanine is a commonly used ncAA for photo-crosslinking, and a bifunctional version carrying a terminal alkyne on the distant end, named BPKyne (4′-ethynyl-p-benzoyl-l-phenylalanine, Figure 2), was first developed for incorporation in peptides by Chen et al. [32]. The Mapp lab has adapted it for genetic code expansion in yeast cells [33], using an engineered E. coli tyrosyl synthetase with the mutations Y37G, D182G, and L186A, which was originally developed for benzophenone [34,35]. This incorporation strategy is also compatible with bacterial and mammalian cells. Joiner et al. demonstrated the crosslinking and biotin-pulldown of a transcriptional complex from live cells. The choice of crosslinker and click-handle make this amino acid a strong candidate for experiments in complex biological environments.

The Chen lab developed a diazirine-based amino acid, DiZASeC (Se-(N-(2-(3-(but-3-yn-1-yl)-3H-diazirine-3-yl)ethyl)propionamide)-3-yl-homoselenocysteine, Figure 2), that, in addition to a terminal alkyne, also features a cleavable selenium-carbon bond—essentially making it a trifunctional ncAA [36]. It is based on an earlier photo-crosslinker by the same lab, which incorporates a selenium atom in the lysine side chain, which undergoes oxidative cleavage upon H2O2 treatment and separates the crosslinked side chain from the POI [37,38]. The separated chain can be enriched via biotinylation and the isotope labeled at the cleavage site, making it useful for quantitative mass spectrometry. This ncAA has been used to identify novel protease substrates in pathogenic E. coli to better understand how it can traverse the host stomach [39]. Despite the modifications to the lysine side chain, DiZASeC is recognized and incorporated by the Methanosarcina barkeri pyrrolysyl synthetase with the mutations L274A and C313S, originally developed for another diazirine-lysine [40]. The use of the very reactive diazirine together with the releasable linker and labeling mechanism allows this ncAA to identify less abundant protein interactions that elude other less sensitive methods [41].

A similar approach has been used by the Schultz lab who also synthesized a pyrrolysine analog with a diazirine and alkyne group, PrDiAzK (Nε-(((3-((prop-2-yn-1-yloxy)methyl)-3H-diazirine-3-yl)methoxy)carbonyl)-L-lysine; Figure 2) [42]. In this case, the bifunctional head is coupled to a native lysine side chain via a carbamate, and the diazirine is placed in closer proximity to the ε-amino group and therefore the protein backbone. The ncAA includes an ester group that makes the side chain less hydrophobic compared with other diazirine-lysines. It is readily incorporated by the M. mazei pyrrolysine synthetase Y306A/Y384F mutant that is commonly used for lysine derivatives with large head groups, and is therefore optimized for a variety of host organisms, including mammalian cells [43]. Proof of principle experiments in E. coli and human cell culture were conducted and recently it was used to study protein–RNA interactions. This experiment also showed that the position of the diazirine is of great importance for the crosslinking efficiency [44]. In addition, PrDiAzK was incorporated and labeled proteome wide, using sense codon competition. This amino acid is also commercially available (SiChem, Bremen, Germany, Cat# SC-8028).

The four ncAAs highlighted in this review demonstrate the variety of combinations between photo-crosslinker and click chemistry groups that have been used in different host organisms and for various applications. In particular, DiZASeC from the Chen lab shows great promise and has been shown to outperform conventional photo-crosslinker amino acids. As small variations in the side chain can lead to different results, it is to be expected that further development in this field will lead to even better results. The protein crosslinking community would greatly benefit from the development of more bifunctional amino acids, especially if they become commercially available.
Aside from identifying less abundant and transient binding partners of a single POI, the use of bifunctional ncAAs might also open the door to study whole interactomes. Methods such as stochastic orthogonal recoding of translation (SORT) [45] have been developed to introduce ncAAs into the whole proteome simultaneously. Instead of suppressing a stop codon, the genome is expanded by stochastically incorporating ncAAs in place of certain sense codons and under competition with the native amino acids [46]. Combining this with photo-crosslinkers has the potential to capture interactions throughout the whole proteome, as has been shown by the surrogate-based method, where a photo-crosslinker analog of a canonic amino acid is supplemented and incorporated residue specifically [47,48]. The problem is to isolate and identify the crosslinked proteins, as affinity methods usually only work for individual proteins. Having a click-chemistry group present in every crosslinked peptide, on the other hand, allows for the pulldown of all relevant molecules in a single step, and could potentially generate an interactome fingerprint for each combination of codon and cell states.

The author thanks Annika Urbanek for proofreading and helpful discussion. 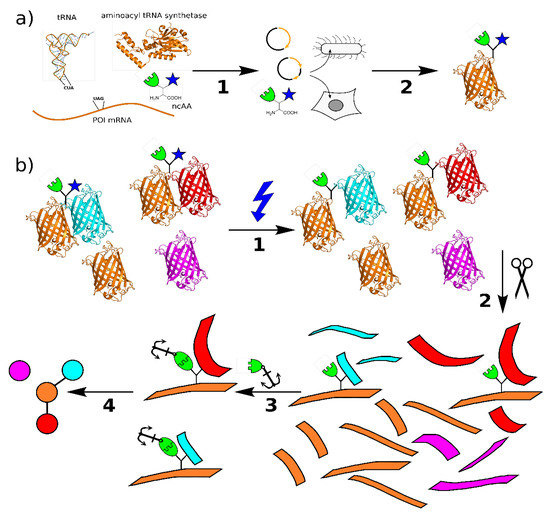 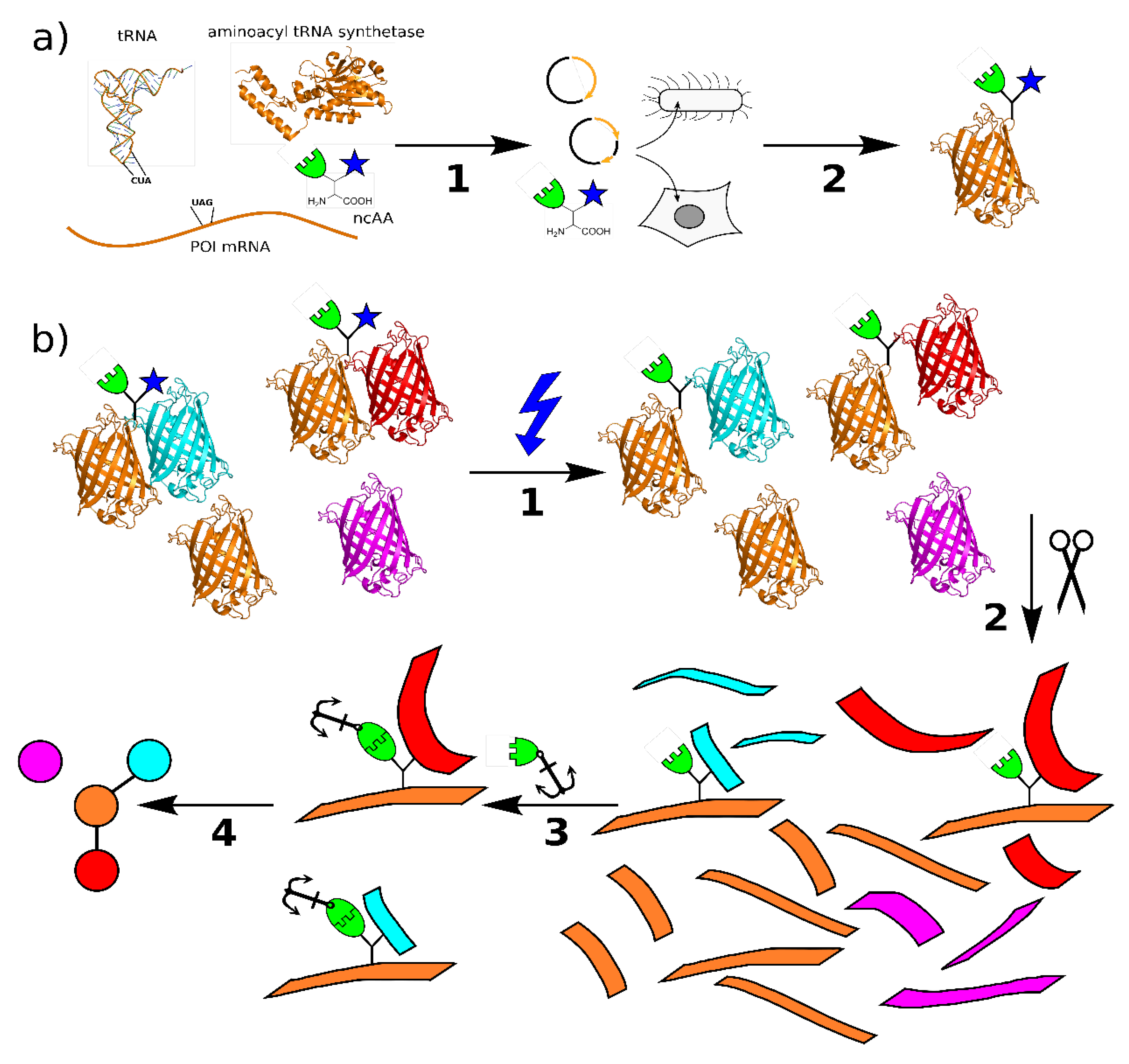