Characterization of the Prion Protein Binding Properties of Antisense Oligonucleotides

Antisense oligonucleotides (ASOs) designed to lower prion protein (PrP) expression in the brain through RNase H1-mediated degradation of PrP RNA are in development as prion disease therapeutics. ASOs were previously reported to sequence-independently interact with PrP and inhibit prion accumulation in cell culture, yet in vivo studies using a new generation of ASOs found that only PrP-lowering sequences were effective at extending survival. Cerebrospinal fluid (CSF) PrP has been proposed as a pharmacodynamic biomarker for trials of such ASOs, but is only interpretable if PrP lowering is indeed the relevant mechanism of action in vivo and if measurement of PrP is unconfounded by any PrP–ASO interaction. Here, we examine the PrP-binding and antiprion properties of ASOs in vitro and in cell culture. Binding parameters determined by isothermal titration calorimetry were similar across all ASOs tested, indicating that ASOs of various chemistries bind full-length recombinant PrP with low- to mid-nanomolar affinity in a sequence-independent manner. Nuclear magnetic resonance, dynamic light scattering, and visual inspection of ASO–PrP mixtures suggested, however, that this interaction is characterized by the formation of large aggregates, a conclusion further supported by the salt dependence of the affinity measured by isothermal titration calorimetry. Sequence-independent inhibition of prion accumulation in cell culture was observed. The inefficacy of non-PrP-lowering ASOs against prion disease in vivo may be because their apparent activity in vitro is an artifact of aggregation, or because the concentration of ASOs in relevant compartments within the central nervous system (CNS) quickly drops below the effective concentration for sequence-independent antiprion activity after bolus dosing into CSF. Measurements of PrP concentration in human CSF were not impacted by the addition of ASO. These findings support the further development of PrP-lowering ASOs and of CSF PrP as a pharmacodynamic biomarker. View Full-Text
Keywords: prion; antisense oligonucleotide; biomarker; cerebrospinal fluid; neurodegeneration; isothermal titration calorimetry; dynamic light scattering; nuclear magnetic resonance prion; antisense oligonucleotide; biomarker; cerebrospinal fluid; neurodegeneration; isothermal titration calorimetry; dynamic light scattering; nuclear magnetic resonance
►▼ Show Figures 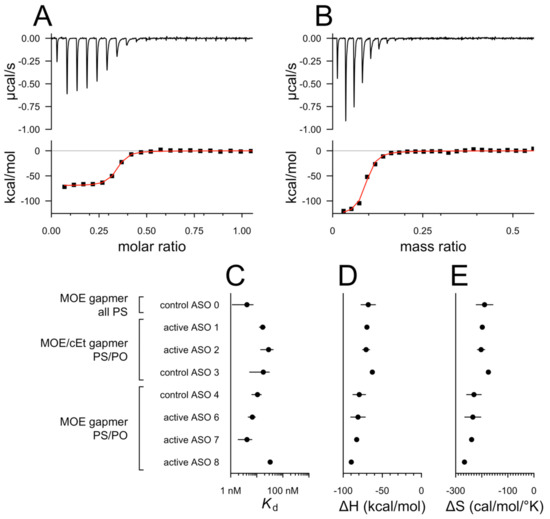