On the Discrete Version of the Schwarzschild Problem

We consider a Schwarzschild type solution in the discrete Regge calculus formulation of general relativity quantized within the path integral approach. Earlier, we found a mechanism of a loose fixation of the background scale of Regge lengths. This elementary length scale is defined by the Planck scale and some free parameter of such a quantum extension of the theory. Besides, Regge action was reduced to an expansion over metric variations between the tetrahedra and, in the main approximation, is a finite-difference form of the Hilbert–Einstein action. Using for the Schwarzschild problem a priori general non-spherically symmetrical ansatz, we get finite-difference equations for its discrete version. This defines a solution which at large distances is close to the continuum Schwarzschild geometry, and the metric and effective curvature at the center are cut off at the elementary length scale. Slow rotation can also be taken into account (Lense–Thirring-like metric). Thus, we get a general approach to the classical background in the quantum framework in zero order: it is an optimal starting point for the perturbative expansion of the theory, finite-difference equations are classical, and the elementary length scale has quantum origin. Singularities, if any, are resolved. View Full-Text
Keywords: Einstein theory of gravity; minisuperspace theory; piecewise flat space-time; Regge calculus; Schwarzschild black hole Einstein theory of gravity; minisuperspace theory; piecewise flat space-time; Regge calculus; Schwarzschild black hole
►▼ Show Figures 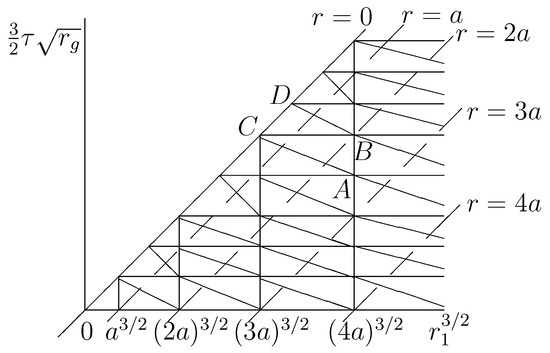 Khatsymovsky, V. On the Discrete Version of the Schwarzschild Problem. Universe 2020, 6, 185.