Valerie A. Ferro
1 and

Melittin, the main peptide present in bee venom, has been proposed as having potential for anticancer therapy; the addition of melittin to cisplatin, a first line treatment for ovarian cancer, may increase the therapeutic response in cancer treatment via synergy, resulting in improved tolerability, reduced relapse, and decreased drug resistance. Thus, this study was designed to compare the metabolomic effects of melittin in combination with cisplatin in cisplatin-sensitive (A2780) and resistant (A2780CR) ovarian cancer cells. Liquid chromatography (LC) coupled with mass spectrometry (MS) was applied to identify metabolic changes in A2780 (combination treatment 5 μg/mL melittin + 2 μg/mL cisplatin) and A2780CR (combination treatment 2 μg/mL melittin + 10 μg/mL cisplatin) cells. Principal components analysis (PCA) and orthogonal partial least squares discriminant analysis (OPLS-DA) multivariate data analysis models were produced using SIMCA-P software. All models displayed good separation between experimental groups and high-quality goodness of fit (R2) and goodness of prediction (Q2), respectively. The combination treatment induced significant changes in both cell lines involving reduction in the levels of metabolites in the tricarboxylic acid (TCA) cycle, oxidative phosphorylation, purine and pyrimidine metabolism, and the arginine/proline pathway. The combination of melittin with cisplatin that targets these pathways had a synergistic effect. The melittin-cisplatin combination had a stronger effect on the A2780 cell line in comparison with the A2780CR cell line. The metabolic effects of melittin and cisplatin in combination were very different from those of each agent alone.
Keywords: melittin; cisplatin; synergy; sensitive and resistant ovarian cancer cells; metabolomics melittin; cisplatin; synergy; sensitive and resistant ovarian cancer cells; metabolomics

Combination therapy has long been studied in the treatment of cancer, including ovarian cancer [1]. It is a logical approach, focusing on increasing the response and tolerability to treatment, while also decreasing resistance [2]. Unfortunately, it can be difficult to assess whether a particular combination will behave in a synergistic, additive, or antagonist fashion when used on a particular cancer patient. The only known way of determining their effectiveness is to identify specific measures, such as response rate, survival, or time to progression, and assess if or whether the new combination is able to achieve a significant improvement [2]. Combination therapy is essentially cooperative: each agent involved should have non-overlapping toxicities, different mechanisms of action with minimal cross-resistance, and individually proven in treatment by itself [2].
Several cancers, including ovarian cancer, have demonstrated resistance or reduced sensitivity to cisplatin treatment, leading to decreased time to disease progression, increased likelihood of relapse, and reduced efficacy upon re-treatment during relapse [3,4]; cisplatin itself causes significant health problems, such as nephrotoxicity [5]. Ideally, cisplatin in combination with a drug that diminishes its negative effects while enhancing the therapeutic effects would decrease resistance or relapse while mitigating its negative effects. For example, cisplatin (or another platinum agent) in combination with taxanes (e.g., paclitaxel) is now regarded as standard chemotherapy in ovarian cancer, where the taxane enhances the tumour’s radiosensitivity. Cisplatin and the adenovirus OBP-301 have also been shown to work synergistically [1].
Cisplatin shares cytotoxic synergy with bee venom [1]. Bee venom makes sense as a complement to cisplatin: it has protective effects in many areas of the body such as the blood and nerves [6]; it is able to inhibit cell growth in tumours [7]; and has even been examined and used in complementary treatments that are necessitated by the effects of chemotherapy, such as allodynia [8] and neuropathy [9]. Cisplatin in combination with bee venom has been successfully used against human cervical and laryngeal carcinoma cells, including their drug-resistant sublines [10], and human glioblastoma [11]. Several studies have found that phospholipase A2, another component of bee venom, not only mitigates the negative impact of cisplatin on kidneys [12], but also boosts regulatory T cell (Treg) numbers in the spleen and enhances Treg traffic to the kidneys following cisplatin exposure. This is important, as Tregs play a significant role in many mechanisms, including inflammation and autoimmunity suppression [4,12,13]. A significant bonus in this dynamic is that bee venom has no negative impact on the anti-cancer properties of the cisplatin [4], meaning it in no way diminishes the effect of the cisplatin treatment. This is critical; a combinatory agent which diminishes any positive effects of the primary treatment undermines its effectiveness overall. The effects that cisplatin and bee venom have together on ovarian cancer cells emerge from the synergistic relationship between the two agents [14]. Alizadehnohi et al. report that separately and together, the two agents induce apoptosis in human ovarian cancer cells; bee venom appears to enhance the cytotoxic impact of cisplatin [14]. It also appears that melittin provokes responses in cisplatin-sensitive cells which lead to decreasing levels of amino acids, which in turn affect the energy metabolism of the tumour [15].
In order to understand these effects and the metabolic changes that the cisplatin-melittin combination has on ovarian cancer cells, metabolomic investigations can be undertaken. Metabolomics in the context of oncology usefully focuses on diagnosis and prognosis, as well as on evaluating the effectiveness of therapy [16,17]. For instance, one study employed nuclear magnetic resonance (1H-NMR) spectroscopy and was able to accurately separate serum metabolite profiles of three groups of patients: namely women with ovarian cancer, normal premenopausal women, and women with a benign ovarian disease [18]. In addition, LC-MS in combination with Biolog Microarray assays revealed that treatment of cisplatin-resistant and sensitive ovarian cancer cells with melittin distinctively altered their lipid profiles and their ability to metabolise certain carbon energy sources, [15]. NMR spectroscopy has also been used to produce and examine metabolic profiles in other cancers such as hepatocellular carcinoma [19].
In essence, the effects of the cytotoxic mechanisms of both cisplatin and melittin, together and separately, cause changes in cells which can be identified and measured through metabolomic analysis. The current study aimed to examine the metabolic effects of melittin in combination with cisplatin on A2780 and A2780CR human ovarian cancer cell lines using a LC-MS based metabolomics approach employing a ZIC-pHILIC column. Multivariate data analysis was performed based on PCA and OPLS-DA models constructed using the SIMCA-P software.

2.1. The Cytotoxicity of Melittin in Combination with Cisplatin

The specific interaction between melittin and cisplatin on A2780 and A2780CR cancer cell lines was evaluated by the CI analysis. Drug combination synergy was performed using CompuSyn software [59]. CI values and CI-Fa plot (plot representing CI versus Fa, the fraction affected by a particular dose) were calculated by CompuSyn program (Compusyn Inc., Paramus, NJ, USA). All experiments were repeated at least three times.

4.5. Determination of the Effect of Melittin in Combination with Cisplatin on Cell Metabolomes

Data extraction for each of the samples was carried out by MZmine-2.10 software (mzmine.github.io/) using identical parameters for peak detection, deconvolution, deisotoping, alignment, filtering, and gap filling in order to make multiple data files comparable [23]. The extracted ions, with their corresponding m/z values and retention times, were pasted into an Excel macro of the most common metabolites prepared in–house to facilitate identification, and a library search was also carried out against accurate mass data of the metabolites in the Human Metabolome, Kyoto Encyclopedia of Genes and Genomes, and Metlin databases. The lists of the metabolites obtained from these searches were then carefully evaluated manually by considering the quality of their peaks and their retention time match to the standard metabolite mixtures run in the same sequence. The MS data were log2-transformed and mean-centred with unit variance scaling for statistical analysis. Statistical analyses were performed using both univariate and multivariate approaches. The p-values from univariate analysis were adjusted using the FDR control and differences in the levels (or peak areas) of the metabolites between treated and control cells were considered significant at p < 0.05. MetaboAnalyst®, a web-based metabolomic data processing tool [60], was used for supporting fold-change analysis, and t-tests. SIMCA-P software version 14.0 (Umetrics, Crewe, UK) was also used for multivariate analysis of the metabolite data with Pareto scaling prior to modelling with PCA and OPLS-DA. OPLS-DA models were validated based on multiple correlation coefficient (R2) and cross-validated R2 (Q2) in cross-validation and permutation tests.

Based on the results presented, a metabolic signature for the cisplatin and melittin combination treatment for A2780 and A2780CR OCCs is proposed. Melittin and cisplatin together have different metabolic effects on these cells compared to melittin alone, which preferentially affects fatty acids, amino acids, and TCA cycle intermediates. The most significantly affected metabolites due to the melittin + cisplatin combination treatment in both cell lines were in the TCA cycle, oxidative phosphorylation, purine and pyrimidine metabolism, and arginine/proline pathways. This distinct mechanism of action of the melittin + cisplatin combination may provide a new paradigm for overcoming chemoresistance in ovarian cancer therapy. Our results provide rationale for the ongoing study of melittin in combination with cisplatin that could produce improved therapy for platinum resistance in ovarian cancer.

Sanad Alonezi is funded by the government of Saudi Arabia (Armed Forces Medical Services Ministry of Defence). Jonans Tusiimire and Jennifer Wallace are both funded by Beesen Co. Ltd. (Dae Jeon, Korea) through a partnership between Strathclyde University and the Korea Institute for Advancement of Technology (KIAT). 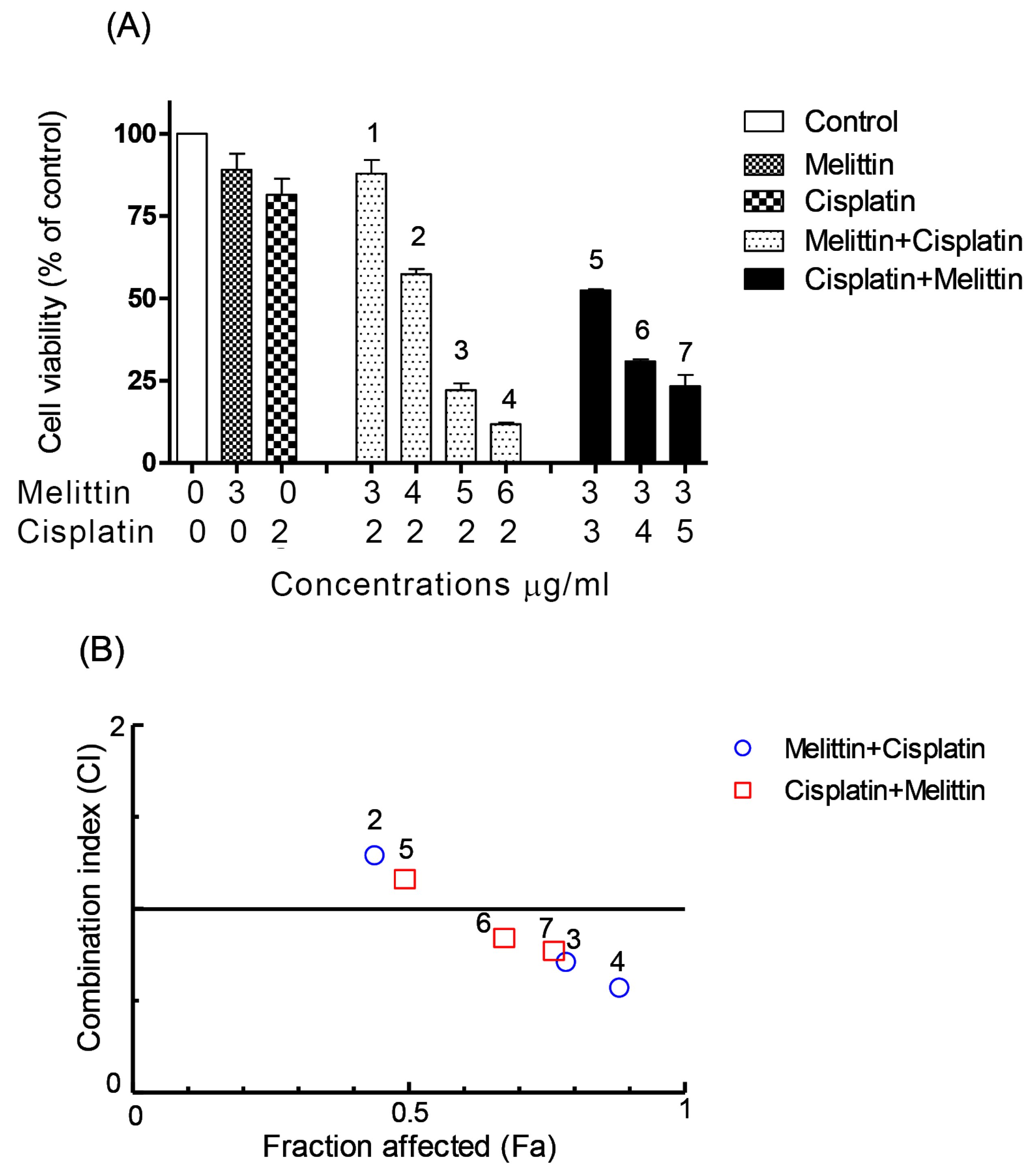 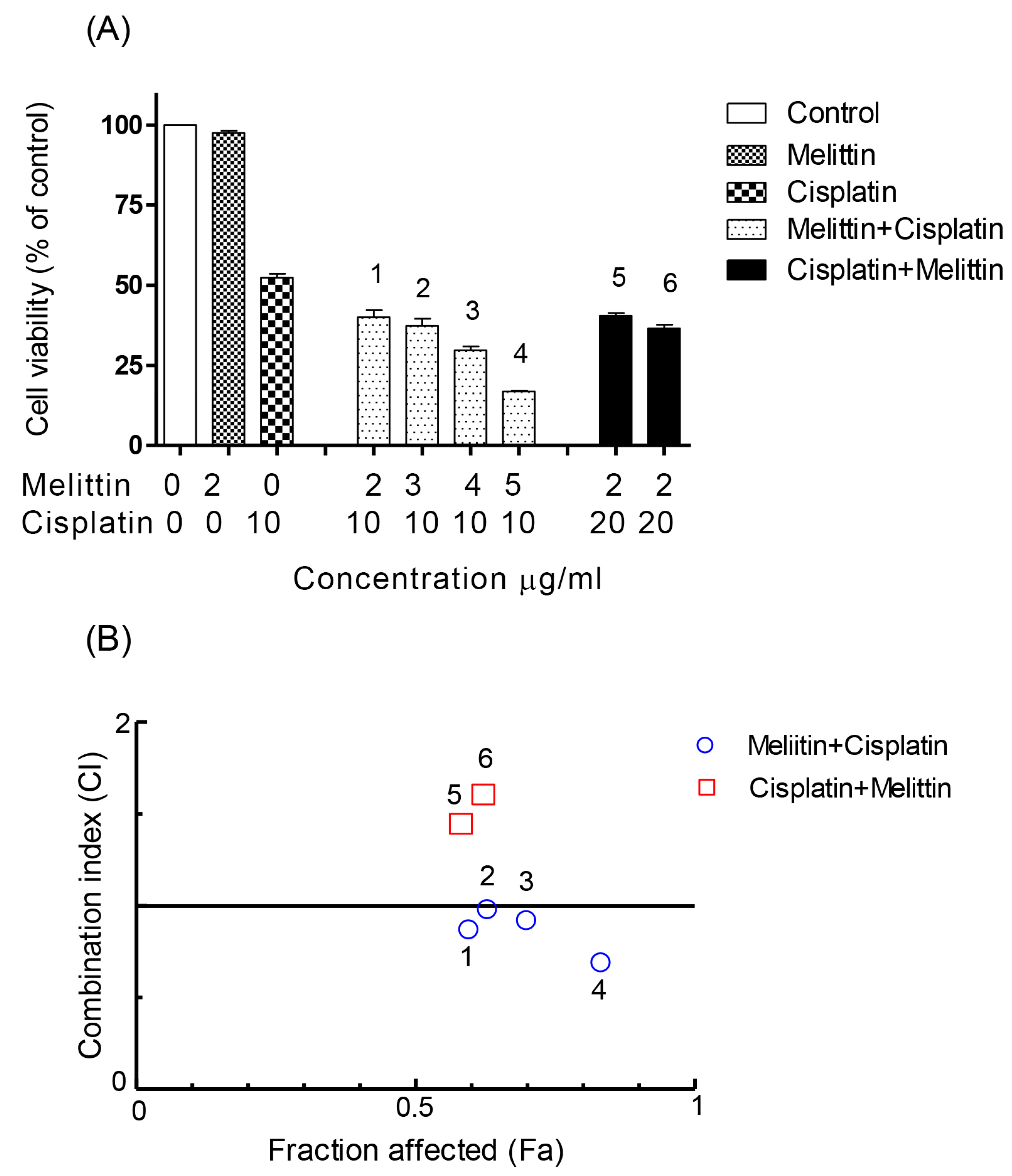 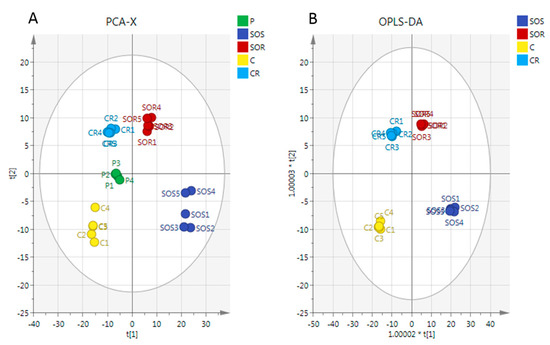 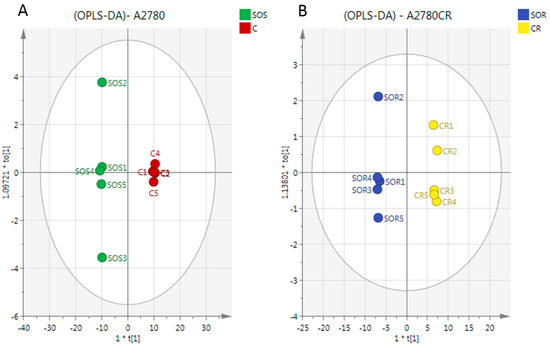 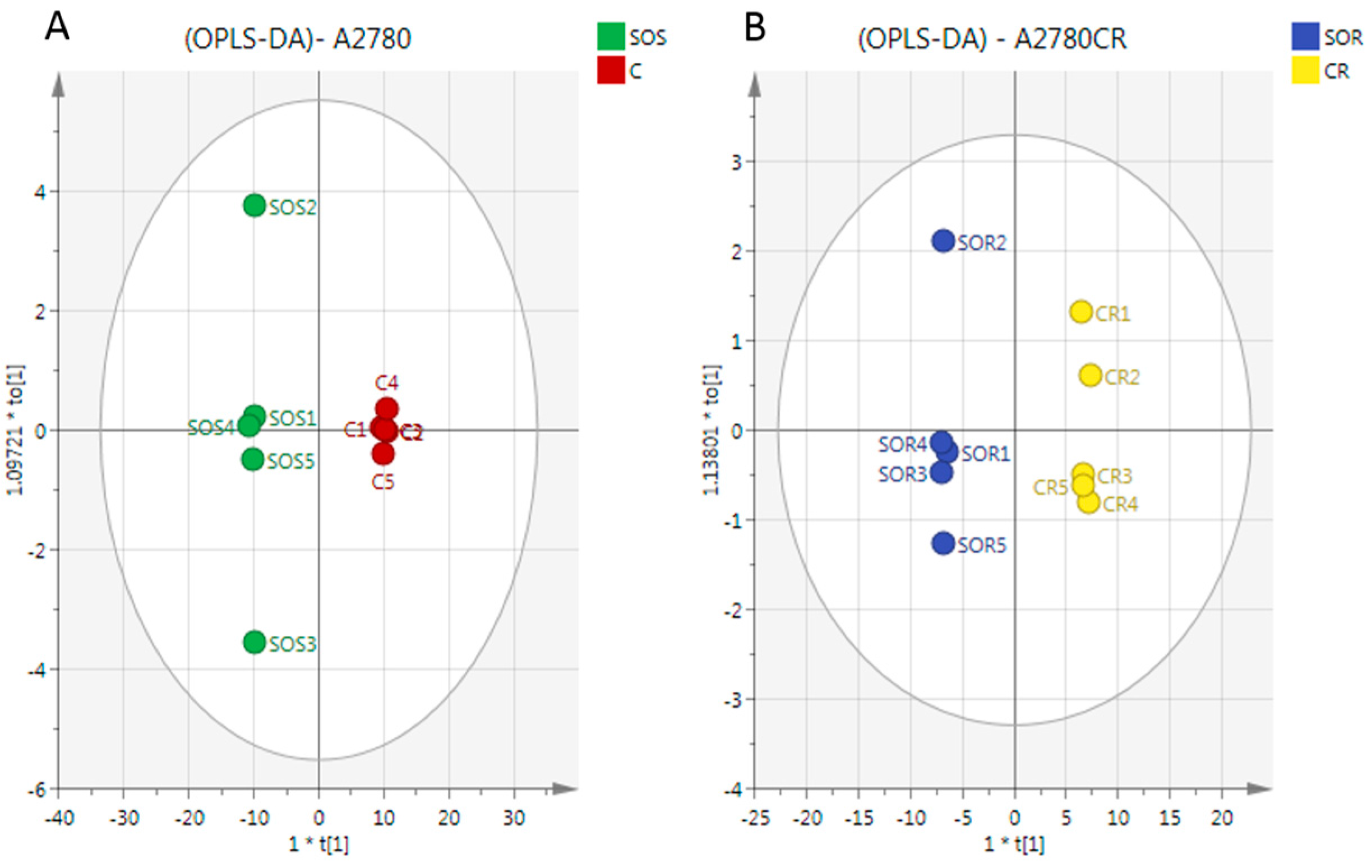