Research Progress of Metabolomics in Asthma

Parkinson’s disease (PD) is a common neurodegenerative disorder, primarily characterised clinically by bradykinesia, resting tremor, and rigidity, and neuropathologically by extensive dopaminergic neuronal loss and accumulation of α-synuclein deposits known as Lewy bodies. These changes occur most severely within the substantia nigra pars compacta, but also throughout other regions of the brain [1,2,3]. As well as motor dysfunction, cognitive impairment is a common symptom in PD as the disease progresses, with up to 46% of individuals going on to develop Parkinson’s disease dementia (PDD) in the ten years following initial diagnosis [4], and up to 80% by twenty years [5].
Despite how common the condition is, the causes and mechanisms of PDD remain poorly characterised. Most cases are sporadic with no identifiable cause, and treatments remain purely symptomatic, with even the most promising clinical trials thus far being unable to slow, stop, or reverse the progression of the disease. This is also the case with other similar neurodegenerative diseases, such as Alzheimer’s (ADD) and Huntington’s disease (HD), which also currently have only symptomatic treatments despite extensive interest and studies into causes, mechanisms, and potential treatments [6].
These neurodegenerative diseases share several characteristics. Age is a primary risk factor for the development of symptoms (although HD is always caused by a dominant autosomal mutation in the huntingtin gene; the development of symptomology generally occurs with older age), cerebral protein deposition is present in each condition (α-synuclein in PD, tau and amyloid-β in ADD, and huntingtin in HD), and the clinical presentation can show significant overlap, with increased risk of psychological complaints [7], issues with sleep [8], and difficulty walking [9], as well as the progressive development of cognitive impairment [10,11].
These findings have raised the question as to whether there may be common pathogenic insults present across multiple neurodegenerative diseases contributing to these similarities in presentation. Common disruptions in multiple metabolic pathways have already been identified in ADD and HD brains, including widespread urea [12,13,14,15] and glucose increases [13,16,17,18], dysregulation of glucose and purine metabolism pathways [13,16,17,19,20], and decreases in the essential nutrient pantothenic acid [21,22], also known as vitamin B5. Pantothenic acid is essential for the synthesis of coenzyme A (CoA), a molecule with extensive roles in metabolism including in the tricarboxylic acid (TCA) cycle, fatty acid metabolism, and acetylcholine and myelin synthesis, amongst others. Dysregulation of pantothenic acid could disrupt the supply of this essential molecule, with widespread downstream metabolic complications. Inborn mutations in the pantothenate kinase 2 gene (PKAN2), which is an intermediate in the CoA synthesis pathway, are associated with a disease known as pantothenate kinase-associated neurodegeneration [23], a condition characterised by severe brain damage within the basal ganglia and progressive cognitive and motor dysfunction including parkinsonism.
Levels of pantothenic acid have not, to our knowledge, been investigated previously in the PDD brain. Thus, this investigation is, to our knowledge, the first to report dysregulation of cerebral pantothenic acid in PDD, similar to that previously observed in ADD and HD.

Cases and controls were matched for age, sex, post-mortem delay (PMD), and brain weight, with no significant differences in any of these variables (see Table 1). Samples were acquired with the lowest PMD possible, with a maximum of 26 h. Additional metadata, including cause of death and disease staging, were also obtained for all samples (see Supplementary Material A).
Due to a lack of available SN tissue for two controls, two additional, replacement SN samples (C10 and C11) were obtained from different donors to those employed for the other brain regions. When the revised SN cohort was analysed, it was still matched for age, sex, and brain weight, but cases had a lower PMD than controls (p = 0.03; see Table 1).

2.3. Comparisons with ADD and HD

As well as investigating case–control comparisons of pantothenic acid in PDD, we also compared the current results with those we obtained in previous analyses of other neurodegenerative diseases. Our group has previously performed analyses of pantothenic levels in ADD [21] and HD [17,22] by methods comparable to those used in this study. Although there is some variation in the brain regions investigated, it is possible to compare findings across multiple areas of the brain in all three conditions, including the CB, MCX, PVC, HP, MTG, and CG, as well as the SN in PDD and HD (see Table 3 and Figure 2).
Notably, PDD, ADD, and HD all showed significantly decreased pantothenic acid in the CB, where the reduction was ~40–50%. This is the only region investigated in all three diseases that showed a significant alteration in every condition. Both PDD and HD show a significant reduction of approximately 40% in the SN, but this region was not investigated in ADD. The MED was not included in either the ADD or HD studies, and so cannot be compared to PDD. Both ADD and HD showed significantly decreased pantothenic acid in the entorhinal cortex (ENT), but this region was not investigated in the current PDD study.
Pantothenic acid dysregulations appear to be less widespread in PDD than either ADD or HD, showing changes in three of nine investigated regions, in comparison to seven of eleven regions in HD and all seven areas reported on in ADD. Where reductions occur, they are on a similar scale, at approximately 60% of control values.

Brain tissue from nine regions, including the middle temporal gyrus (MTG); motor cortex (MCX); primary visual cortex (PVC); hippocampus (HP); anterior cingulate gyrus (CG); cerebellum, at the level of the dentate nucleus (CB); substantia nigra (SN); pons; and medulla oblongata (MED), were obtained from nine confirmed cases of PDD and nine controls from the University of Miami Brain Endowment Bank, USA (part of the National Institute of Health NeuroBioBank network). These regions were selected based on three main criteria: (1) availability of as many regions as possible from the same donor (this is more difficult when including multiple high-impact regions, which are in high demand), (2) inclusion of not only regions highly impacted in PDD, but also moderately impacted and relatively spared regions in order to investigate whether changes in B5 mirror typical levels of neurodegeneration observed in the PDD brain, and (3) overlap with regions investigated in previous analyses of AD and HD brains, so that comparisons could be made between different conditions. All available patient data were collected and recorded, including age at death, sex, brain weight, post-mortem delay (PMD), α-synuclein Braak stage, and cause of death (see Supplementary Material A for individual patient data).

4.2. Diagnosis and Severity of PDD Cases

Tissues obtained from both cases and controls were examined and diagnosed by the referring neuropathologists of the Miami Brain Endowment Bank. All were diagnosed to be of the α-synucleinopathy neocortical type, consistent with the clinical phenotype of PDD, and controls did not show any features of neurodegeneration or vascular pathology. PDD staging was assessed using either Braak staging [1] or McKeith’s typing of Lewy body disease [47]. Individual donor data can be found in Supplementary Material A.

Peaks were identified based on the expected retention time (RT) derived by comparison with the RT of the spiked pantothenic acid-labelled internal standard. Peaks were manually checked to ensure correct identification by the software. Standards were only accepted when showing a % difference of <15% of expected, with 6/10 standards required for acceptance of the standard curve. QC samples showing a % difference >20% of expected concentration were excluded, with 2/3 successful QC runs required in each batch for the run to be accepted.
Concentrations of pantothenic acid in each sample were determined based on the calibration curve for each region (see Supplementary Material A). Concentrations were corrected for sample wet-weight and case–control differences analysed in GraphPad Prism v8.1.2. (Prism; La Jolla, CA, USA). A non-parametric Mann–Whitney U test was used due to the small sample size, and a p-value < 0.05 was considered significant. A ROC curve was generated by combining all measurements from regions showing significant case–control differences in pantothenic acid (SN, CB, and MED) using GraphPad Prism v8.1.2.
The minimum sample size required to confidently determine case–control differences at a significance level of p < 0.05 was calculated using the sample size calculator from SPH Analytics, Alpharetta, GA, USA (https://www.sphanalytics.com/sample-size-calculator-using-average-values/, accessed on 19 February 2021).
The results obtained were compared to those previously reported in both ADD and HD.

The study was approved by the Research Ethics Committee of the University of Manchester (approval code 2019-7298-11760, approved 4 September 2019).

Raw data is available in Supplementary Material B.

We thank Federico Roncaroli for his assistance in the development and supervision of this study, and Michael Anderson for his assistance in managing the acquisition of tissues used for this study. Miami PDD Cohort: Human tissue was obtained through the NIH Neurobiobank from the University of Miami Brain Endowment Bank. We thank both the banks and donors for supply of these tissues.

All authors declare that they have no conflict of interest with respect to this work. J.X.’s contribution to this work was conducted during their previous employment with the University of Auckland. The funders had no role in the design of the study; in the collection, analyses, or interpretation of data; in the writing of the manuscript, or in the decision to publish the results. 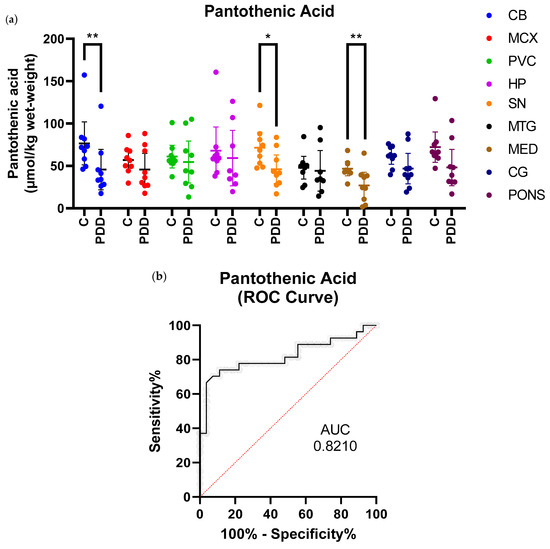