Metabolomic Profile of Weaned Pigs Challenged with E. coli and Supplemented with Carbadox or Bacillus subtilis

This study explored the metabolomic profiles in ileal mucosa and colon digesta in response to enterotoxigenic Escherichia coli F18 (ETEC) infection and dietary use of probiotics and low-dose antibiotics. Weaned pigs (n = 48, 6.17 ± 0.36 kg body weight) were randomly allotted to one of four treatments. Pigs in the negative control (NC) were fed a basal diet without ETEC challenge, whereas pigs in the positive control (PC), antibiotic, and probiotic groups were fed the basal diet, basal diet supplemented with 50 mg/kg of carbadox, or 500 mg/kg of Bacillus subtilis, respectively, and orally challenged with ETEC F18. All pigs were euthanized at day 21 post-inoculation to collect ileal mucosa and colon digesta for untargeted metabolomic profiling using gas chromatography coupled with time-of-flight mass spectrometry. Multivariate analysis highlighted a more distinct metabolomic profile of ileal mucosa metabolites in NC compared to the ETEC-challenged groups. The relative abundance of 19 metabolites from the ileal mucosa including polyamine, nucleotide, monosaccharides, fatty acids, and organic acids was significantly different between the NC and PC groups (q < 0.1). In colon digesta, differential metabolites including 2-monoolein, lactic acid, and maltose were reduced in the carbadox group compared with the probiotics group. In conclusion, several differential metabolites and metabolic pathways were identified in ileal mucosa, which may suggest an ongoing intestinal mucosal repair in the ileum of ETEC-challenged pigs on day 21 post-inoculation. View Full-Text
Keywords: Bacillus subtilis; carbadox; Escherichia coli; intestine; metabolomics; weaned pigs Bacillus subtilis; carbadox; Escherichia coli; intestine; metabolomics; weaned pigs
►▼ Show Figures 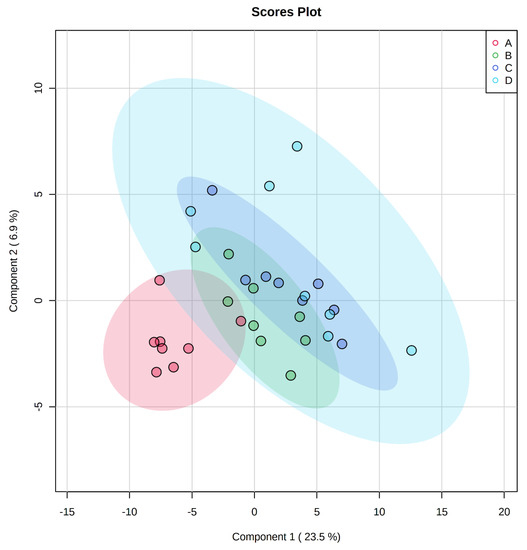