Uncovering Streptomyces-Derived Compounds as Cosmeceuticals for the Development of Improved Skin Photoprotection Products: An In Silico Approach to Explore Multi-Targeted Agents

The pharmacological effects of medicinal plants play a primary role in the mild correction of body weight in humans and animals, reducing the accumulation of fat in their bodies during a state of obesity. Origanum vulgare L. and Scutellaria baicalensis Georgi are widely used as food additives and medicinal plants, but their comprehensive physiological evaluation in model animals in a state of obesity has not been carried out. In a 30-day laboratory experiment on male rats which had developed obesity through a hypercaloric diet, the effects of adding the dry crushed grass O. vulgare or dry crushed roots of S. baicalensis to their feed was evaluated. During the experiment, the rats fed with O. vulgare increased in body weight to only 105.5% of their initial weight, while the body weight of the control group increased to 111.5%, and that of animals fed on S. baicalensis increased to 124.0% of their initial body weight. The average daily increase in the rats’ body weight when O. vulgare was added to their diet decreased to 205 mg/day, and when S. baicalensis was added, on the contrary, it increased to 1417 mg/day, compared to 700 mg/day among the control group. Under the influence of O. vulgare, the lipid metabolism of the rats normalized: the atherogenic index decreased to 33.7%, compared with the values of the control group, due to an increase in the concentration of high-density lipoproteins from cholesterol. The concentration of triglycerides decreased, and the concentration of glucose decreased. The roots of S. baicalensis being added into the diet of rats increased the activity of alkaline phosphatase and decreased the concentration of urea. The atherogenic index also decreased (by up to 35.5% in the control group) and the concentration of high-density lipoprotein cholesterol increased, while the concentrations of triglycerides and glucose decreased. The physical activity of the rats showed a slight tendency to decrease when both O. vulgare and S. baicalensis were added to their diet. Both plant species contributed to a decrease in the emotional status of animals, which was most pronounced when the O. vulgare grass was added to the feed. The results of the study demonstrate the potential of the use of O. vulgare and S. baicalensis as herbal supplementations for the correction of hyperlipidemia and type-2 diabetes mellitus in overweight patients.
Keywords: oregano; Baikal skullcap; relative mass of the organs; bodyweight increase; high-fat diet; phytotherapy; obesity correction oregano; Baikal skullcap; relative mass of the organs; bodyweight increase; high-fat diet; phytotherapy; obesity correction

The choice of animals for the experiment, the research protocols, and the withdrawal of animals from the experiment were approved by the local ethical committee of Dnipro State Agrarian and Economic University (Dnipro, Ukraine). The maintenance, nutrition care of the animals and their withdrawal from the experiment were carried out in accordance with the principles set forth in the “European Convention for the Protection of Vertebrate Animals used for Experimental or other Scientific Purposes” (Strasbourg, France, 18 March 1986, ETS No. 123) and in Law of Ukraine “On protection of animals from cruel treatment" (Kyiv, Ukraine, 21 February 2006, No. 3447-IV).
A total of 24 outbred male laboratory rats of 1.5 months of age were randomly divided into three groups (8 rats/group), so that the average body weight was the same for each group. The body weight range did not exceed ±20% of the average body weight at the beginning of the experiment. The rats were kept in polycarbonate cages with steel lattice lids and a feeding recess, with 4 individuals per cage. The rats were kept in a room at a temperature of 20–22 °C and relative humidity of 50–65%. The light regimen was 12 h of light and 12 h of darkness. According to this regime, ventilation was provided. The animals received water ad libitum [79].
From the first day of the experiment, the diet of all animals had an excess fat content. The high-fat diet was based on a standard diet (75% grain mixture (corn, sunflower grain, wheat, barley), 8% root crops (potatoes, carrots), 2% meat and bone meal and 2% mineral-vitamin complex)) with the introduction of 15% sunflower oils [80,81]. The control group animals received a high-fat diet, and the experimental group received a high-fat diet with the addition of medicinal plants. The high-fat diet of the first experimental group was supplemented with 5% dry O. vulgare leaves, and the second experimental group was supplemented with 5% crushed S. baicalensis roots.
Origanum vulgare plants were collected from the Botanical Garden of the Oles Honchar Dnipro National University (48.435509 °N, 35.043132 °E) on 15 June 2021. The plants were dried under a tent with no exposure to direct sunlight. The above-ground part was fragmented and all rough parts were removed, leaving only the leaves and soft parts of the inflorescences.
The roots of S. baicalensis were dug out on 20 November 2021 in the Botanical Garden of the Oles Honchar National University. The roots were cleaned of soil, rinsed, dried and fragmented with a knife into small pieces no larger than 2–3 mm. The obtained plant material was dried to an air-dried condition for two days in a dark, dry room at the temperature of 25 °C. After drying, fragments of the roots of S. baicalensis were 1.2–2.0 mm and were not fragmented further.
The main ingredients of the rats’ diet were ground in a mill (grain, meat and bone meal, mineral and vitamin complex, dry shoots of medicinal plants) and mixed, then sunflower oil was added and the granules were produced at the rate of 4200 g for each group for the entire period of the experiment (30 days). Root crops, in the appropriate amount and in fresh form, were additionally given every day. The animals had free access to food. The rats were observed daily and their body weight, food intake and water intake were recorded. Morphometric parameters (live body weight, abdominal volume) were determined on the first day of the experiment and on the 30th day [82]. The total body weight gain of the animals and the daily gain in live weight were calculated. The average body weight per group was calculated weekly based on the individual animals.
The orientation-physical activity and emotional status of the experimental animals were studied in an “open field” test. We used an installation consisting of a square area of 1 m2, divided into 16 squares and limited by an opaque wall that was 20 cm high. The experiment was conducted in complete silence, with intense lighting of the field itself. The experimental animal, taken from a cage in a previously darkened room, was placed in the center of the field. The exposure time was 2 min. The animals were tested for four days (days 1–4) at the beginning of the experiment and four days at the end (days 26–30). The number of crossed squares was counted. The parameters included: the peripheral and central floorspace—for assessing the rats’ physical activity; the peripheral (leaning against the wall) and central (without leaning against the wall) racks—for the orientation activity; and the number of acts of grooming, defecation and urination—for assessing the animals’ emotional status [83].
The euthanasia of the animals was performed on the 30th day of the experiment under anesthesia (80 mg/kg ketamine and 12 mg/kg xylazine, intraperitoneally) by total bloodletting from the heart. After autopsy, the condition of the internal organs was visually assessed for the presence of pathological changes [84]. Selection of organs and tissues (heart, liver, lungs, thymus, spleen, stomach, small and large intestines, kidneys) was performed with surgical instruments. The mass of the internal organs was determined with an accuracy of ±10 mg.
Blood samples taken during euthanasia were used for biochemical and hematological analyses. Biochemical parameters were determined using an automatic analyzer, Miura 200 (I.S.E. Srl, Rome, Italy), and High Technology reagent kits (High Technology Inc, North Attleborough, MA, USA), PZ Cormay S.A. (Cormay Diagnostics, Lublin, Poland) and Spinreact S.A. (Spinreact, Girona, Spain). The numbers of erythrocytes and leukocytes in the stabilized blood of the mice were determined using an automatic hematology analyzer, BC-2800Vet (Mindray, Shenzhen, China). Pappenheim blood smears were prepared for the leukogram, followed by Romanovsky–Gimza staining. The numbers of erythrocytes and leukocytes in the stabilized blood of the mice were determined using an automatic hematology analyzer, BC-2800Vet, and Mindray [81].
The data were analyzed using the Statistica 8.0 program (StatSoft Inc., Tulsa, OK, USA). The tables demonstrate the results as x ± SD (mean ± standard deviation). Differences between the values of the control and experimental groups were determined using Tukey’s test (with consideration of Bonferroni’s correction), where the differences were considered significant at p < 0.05.

This research was funded by the Ministry of Education and Science of Ukraine, grant number 0122U000975. 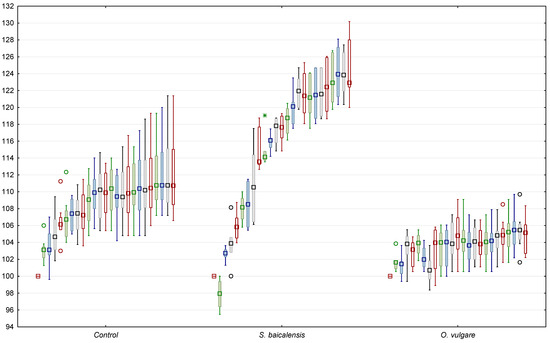 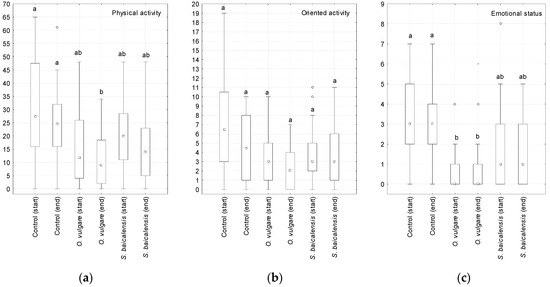