Optimized Methods for Analytical and Functional Comparison of Biosimilar mAb Drugs: A Case Study for Avastin, Mvasi, and Zirabev
Previous Article in Journal

Quality by Design: A Suitable Methodology in Industrial Pharmacy for Costa Rican Universities

Two different concepts for developing direct HPLC-UV methods for quantifying fosfomycin trometamol were developed without any derivatization and modification of the analyte. In the first concept, without the use of alkylamines as ion-pairs in the mobile phase, by using cyanopropyl CN and a strong anion-exchanger column, we investigated the possibility of their highly polar and anion-exchanging forces and mechanisms to retain, separate and detect trometamol without the help of additional agents or modifiers. In the second concept, the most frequent reversed-phase C18 columns with different characteristics and vendors were tested in combination with different length-based alkylamines with 3–10 C atoms in their chains. In our research, we found that the ion-pairing of fosfomycin with 6–10 C-atom-based alkyl-length of aliphatic chains manifested the most appropriate strength of interactions between alkyl-paired trometamol molecules and octadecylsilane or C18 bonded RP column to achieve optimal retention, selectivity and peak shape on chromatograms, with the possibility for the fine-tuning of elution time. The simplicity of our method concept omits the need for expensive and sophisticated columns like HILIC, C30 graphite carbon, and mixed-mode-based columns for easier retaining, separation, and determination of fosfomycin, and for its quantification purposes, especially in high-throughput analyses in regular quality-control laboratories.
Keywords: amines; ion-pairing; HPLC; fosfomycin trometamol amines; ion-pairing; HPLC; fosfomycin trometamol

The antibiotic resistance rate among Enterobacteriaceae uropathogens has recently increased remarkably, especially in the past decade. One of the most effective antibiotics appears to be fosfomycin [1]. In terms of chemical structure, fosfomycin is a phosphoenolpyruvate analog and contains a phosphonic group and an epoxide ring [2]. Fosfomycin trometamol is 2-amino-2-(hydroxymethyl)propane-1,3-diol; [(2R,3S)-3-methyloxiran-2-yl]phosphonic acid, with a molecular weight of 259.15 g/mol, the pKa values of strongest basic of 1.25 and −4.3 of the strongest acidic group, and high water solubility of about 47 mg/mL, and Log p-value of −0.75. Discrepancies in the descriptions of solubilities exist for fosfomycin, regardless of its three forms of existing API substances [3]. Molecules with similar structure and physic-chemical properties, like fosfomycin trometamol, are always the most unpleasant and problematic analytes for most applied, popular and convenient reversed-phase high-performance liquid chromatography (HPLC) analysis with a UV-absorption detector. Fosfomycin has no UV-absorbing chromophores that would enable its monitoring in UV or DAD detectors in direct measuring modes. The two acidic protons with low pH-pKa values make them almost permanently dissociated and ionize in physiological fluids, buffer and the described pH ranges of chromatographic RP columns. These were the reasons for developed and published quantification chromatographic methods with more complex, specific, complicated, expensive and less convenient detectors, like evaporative light scattering, refractive index, corona aerosol discharge, electrochemical conductivity, and finally, a mass spectral detector, which will be cited in the following text in a schedule of their chronological appearance.
According to structure and a global survey of analytical methods for fosfomycin, we had to solve two main problems in our development of the method, the first being to detect the analyte and make it “visible” or noticeable for the determination. The second goal was to enable successful and appropriate retention on the reversed-phase chromatographic column of the highly water-soluble, extremely polar, ionizing, and dissociating molecule. Having these characteristics in mind, the logical starting step would be a method-based use of the anion-exchange column, or modern HILIC column, which achieves satisfying retentivity. However, these columns are expensive, spend a long time equilibrating with a smaller number of theoretical plates compared to RP columns, and are thus less convenient, especially in the fine-tuning of peak elution. Generally, the most used and cited is an amino-propyl polar column, which is very inconvenient to use, especially frequently [4,5,6,7] in quality control laboratories and high-throughput analyses because of its sensitive physicochemical stability nature that leads to a short applicable life due to its high sensitivity to the oxidation of an amino-bonded group with oxygen dissolved in the mobile phase, thus altering the peak elution profile and reducing the retention separation properties and power, resulting in permanent column damaging, as well as its discarding and replacement.
The official pharmacopeial methods suggest the use of 250 mm × 4.6 mm, with 5 μm amino-bonded column equilibrated with 10.86 g/L sodium dihydrogen phosphate and the use of RID detector at 35 °C, flow rate 1 mL/min, equilibration 1–2 h and injection volume of 10 µL. The sample preparation is perorfmed by dissolution of standard or powder sample corresponding to 120 mg/mL fosfomycin trometamol. The recommended injection volume of 10 µL solution with a concentration 120 mg/mL transferred on the column, which is extremely inappropriate and not recommended for proper balance by thermodynamic equilibrium to achieve a separating distribution in Gaussian-shaped symmetrical peaks [4,5,6,7]. Experienced analysts of HPLC already know about the problems when working with and using a differential refractive index detector for detecting, including its extreme sensitivity to temperature, mobile phase composition, and flow rate changes and extreme low sensitivity, which is additionally complicated with the use of an amino column with long-lasting equilibrations, lower number of theoretical plates, lower reproducibility and lower stability with shorter use lifetime, is prone to frequent long drifts and “jumps” of chromatogram baseline, strong sensitivity to the presence of dissolved oxygen in its mobile phase, which converts the amino-bonded group of stationary phase to Schiff-base, followed by irreversible damage to the column. The literature survey method for quantifying fosfomycin trometamol in pharmaceutical dosage forms and other sample matrixes did not result in many published articles and works [8,9,10,11,12,13,14,15,16,17,18,19,20,21,22,23,24,25,26,27,28,29,30].
Our concept from the very beginning was the employment of an alkyl-bonded reversed-phase liquid chromatography column, which is much more confidential, physic-chemically resistive and appropriate for use, including the most frequently used UV-absorbing detectors, diode array or single or multichannel UV-Vis-based construction. The main target of this research was to create a rapid, simple, accurate, selective, reproducible quantification chromatographic method for the determination of a fosfomycin trometamin solid pharmaceutical dosage form without the use of an unpleasant and low-sensitivity differential refractive index detector (RID) and a problematic, heavily equilibrated amino-bonded stationary phase-filled column. These methods are used and described in the official pharmacopoeia quantification method or modern HILIC columns with the use of a corona aerosol discharge detector (CAD), evaporative light scattering detector (ELSD), electrochemical conductometric or mass spectral (MS) detectors, which are already known to be inappropriate for routine analyses and use in quality control laboratories for high-throughput analyses. These were the reasons for choosing a universally responsive differential refratrive index detector with a highly polar NH2-column in the pharmacopoeia monographs for the determination of fosfomycin trometamol in pharmaceutical dosage forms.

All sample preparations were performed in a fresh manner before analysis. The most important aspect after measuring a certain quantity of the standard sample, raw material sample or sachet content of the pharmaceutical dosage form equivalent to fosfomycin trometamol in standard solution, was dissolved in the fresh prepared mobile phase, mechanically shacked for 10 min, 1 min on Ultrasound, filtered through the Agilent RC 25 mm/0.45 μm syringe filters and injected onto the column. Since many experiments were performed, wherein many variables were checked, such as column choice and mobile phase compositions with selected amine sample concentrations. This information is presented in the figure legends or at the top of every presented chromatogram in the supplementary material.

As a general conclusion in our work, after testing many different separation mechanisms and columns, we found that with the careful selection of the mobile phase constituents, two global, different approaches in the creation of a HPLC determination method can yield a simple, rapid, selective and sensitive quantification method for fosfomycin trometamol. Preferential power and applicability between the polar and nonpolar interaction mechanism and columns were given to the second group, C18 or octadecylsilane-based reversed-phase columns, especially with higher carbon load density and surfaces dedicated C18 columns and combined with tested different lengths of alkylamines. We noticed that the use of longer-chain structured amines with 6, 7 and 8-C atoms usually results in better retention, separation and selectivity of the peak of fosfomycin toward other components in sample analysis, with more separated present peaks of other components in the chromatogram. The usage of longer, more hydrophobic alkylamines in these cases demands higher percentages of organic solvent content acetonitrile in the mobile phases, which are usually increased to 9–15% to obtain appropriate retention time of analysis with k` values in the range of 3–8.
The second important characteristic when using longer chain amines for pairing is to consider their lower water solubility and diffusion coefficients, which are the results of longer-lasting equilibrations and at least 10–15 column volumes. In our experience, we paid attention when turbidity appeared with the aminoheptan, dibutylamine and 2,2-dimethyloctylamine. These amines generate turbidity of the mobile phases after they are added to water but disappear when acidification starts by adding o-phosphoric acid and acetonitrile. The use of testing combinations of different C18 columns with different matrix characteristics and different alkylamines can be validated and applied to obtain the best options and different applications. Our results showed that the best option for the successful alkylamine method with 6–8 C atoms would be most applicable. Higher peak symmetries were achieved with longer chromatographic columns with larger volumes of matrixes of the stationary phase, which can better balance high quantities of the injected low UV-absorbing analyte, fosfomycin. The proper choice of the combination of amine and content of acetonitrile as an organic solvent modifier in the mobile phase enabled the alteration and optimization of fosfomycin retention to increase or decrease selectivity, even on shorter and more efficient columns for shorter run times.

The authors T.M., S.K., Y.M., L.L. would like to thank all the brave defenders of Ukraine who made the finalization of this article possible. 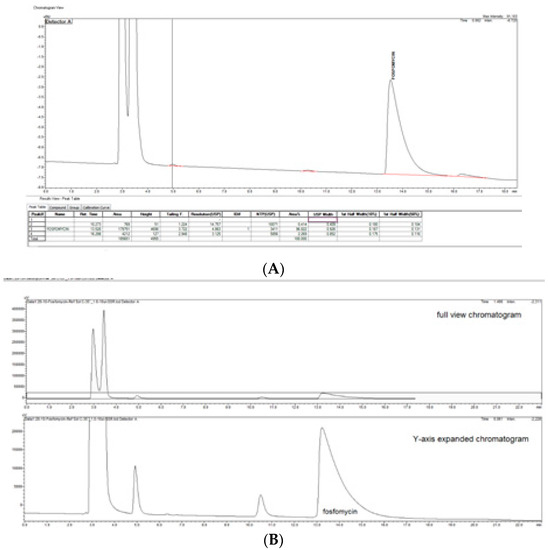 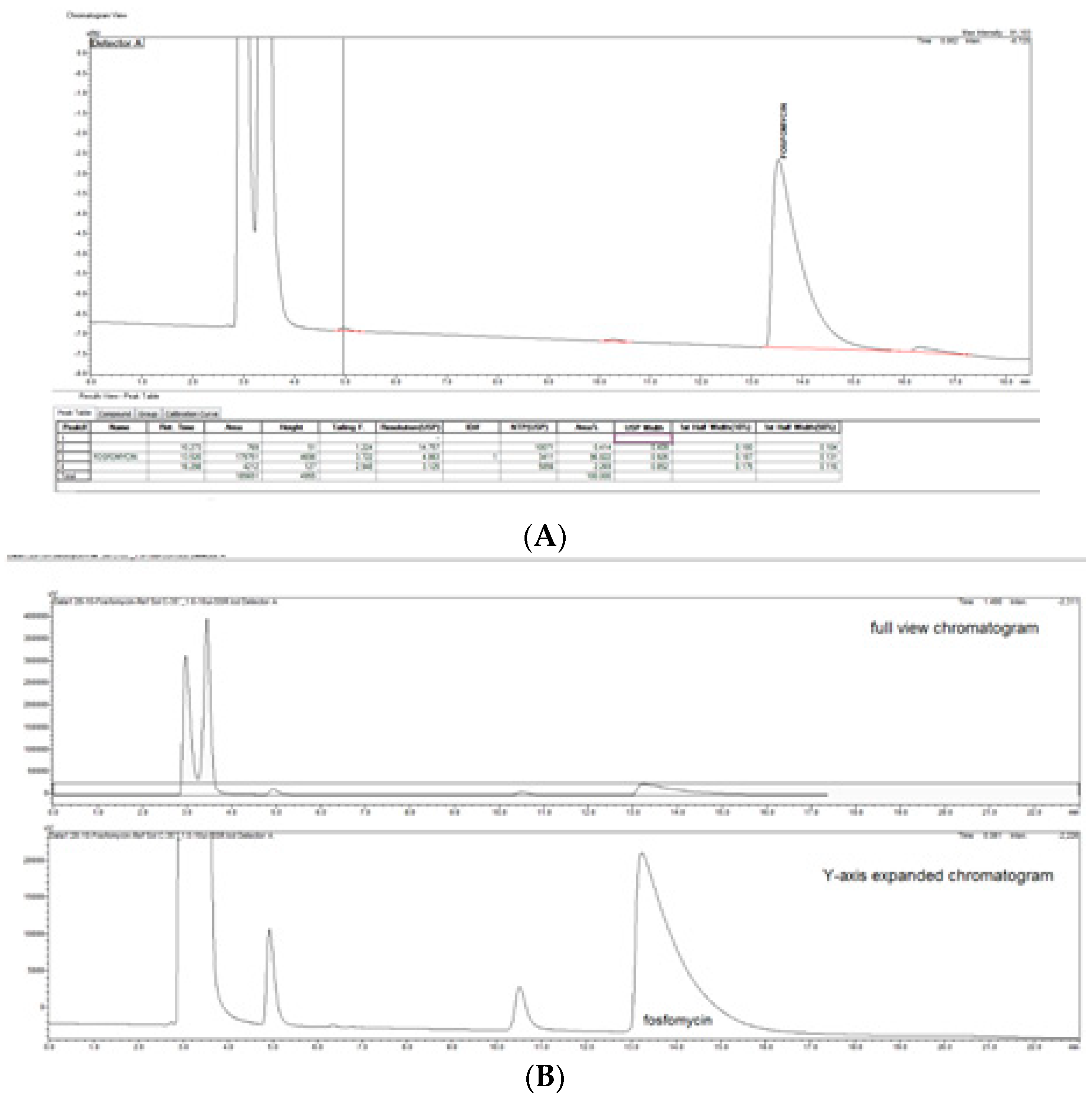 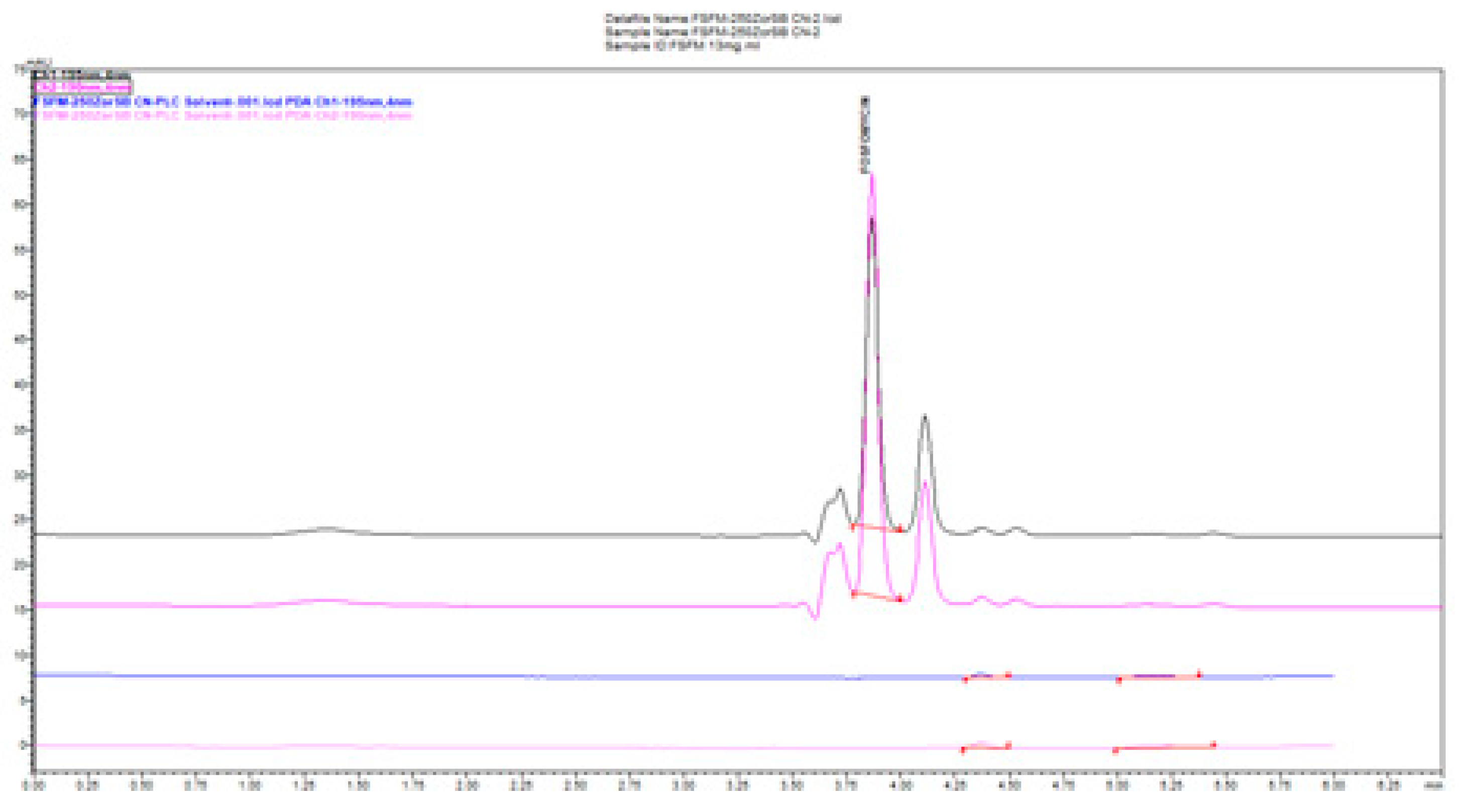 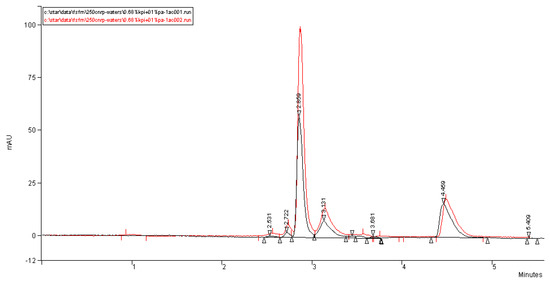 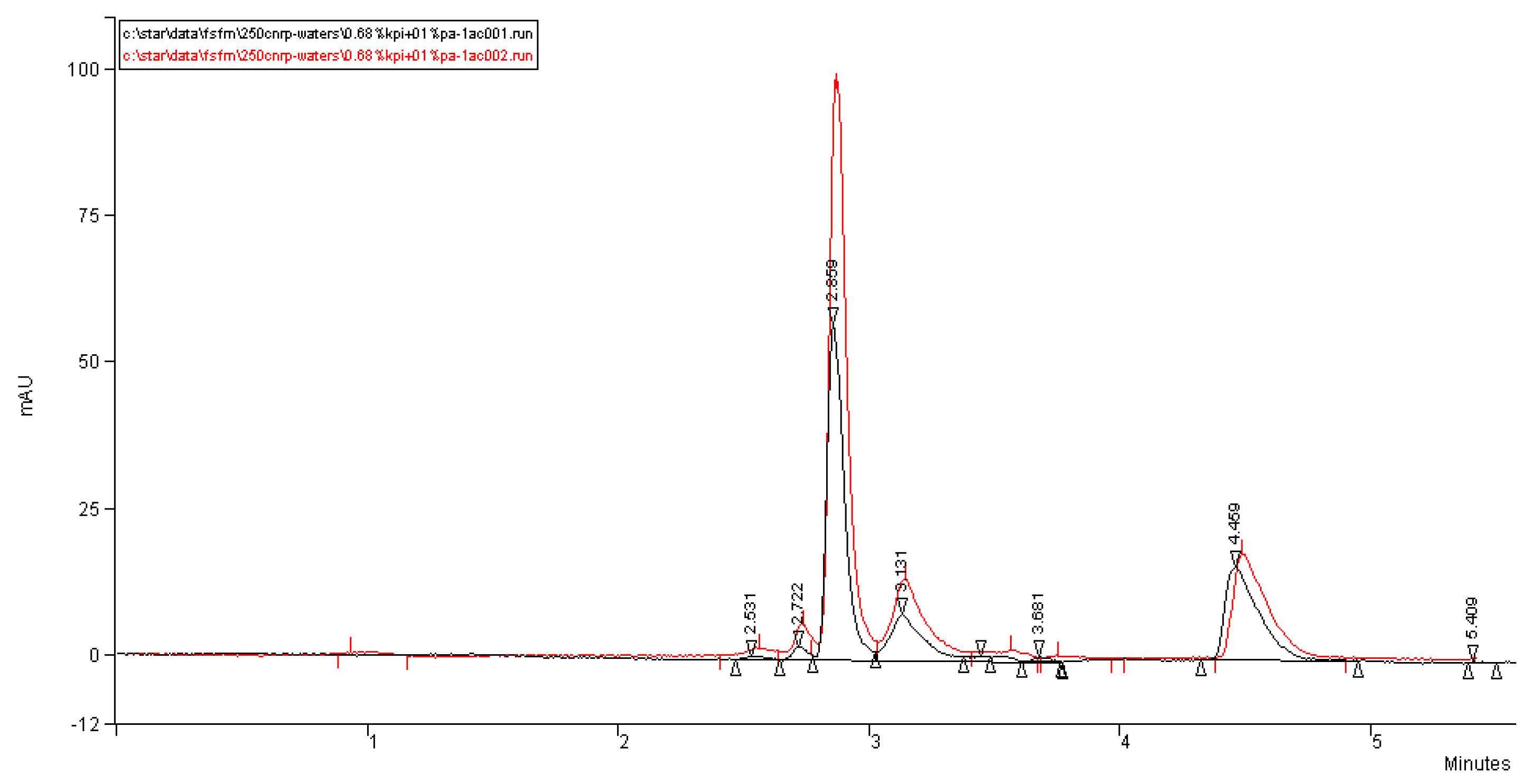 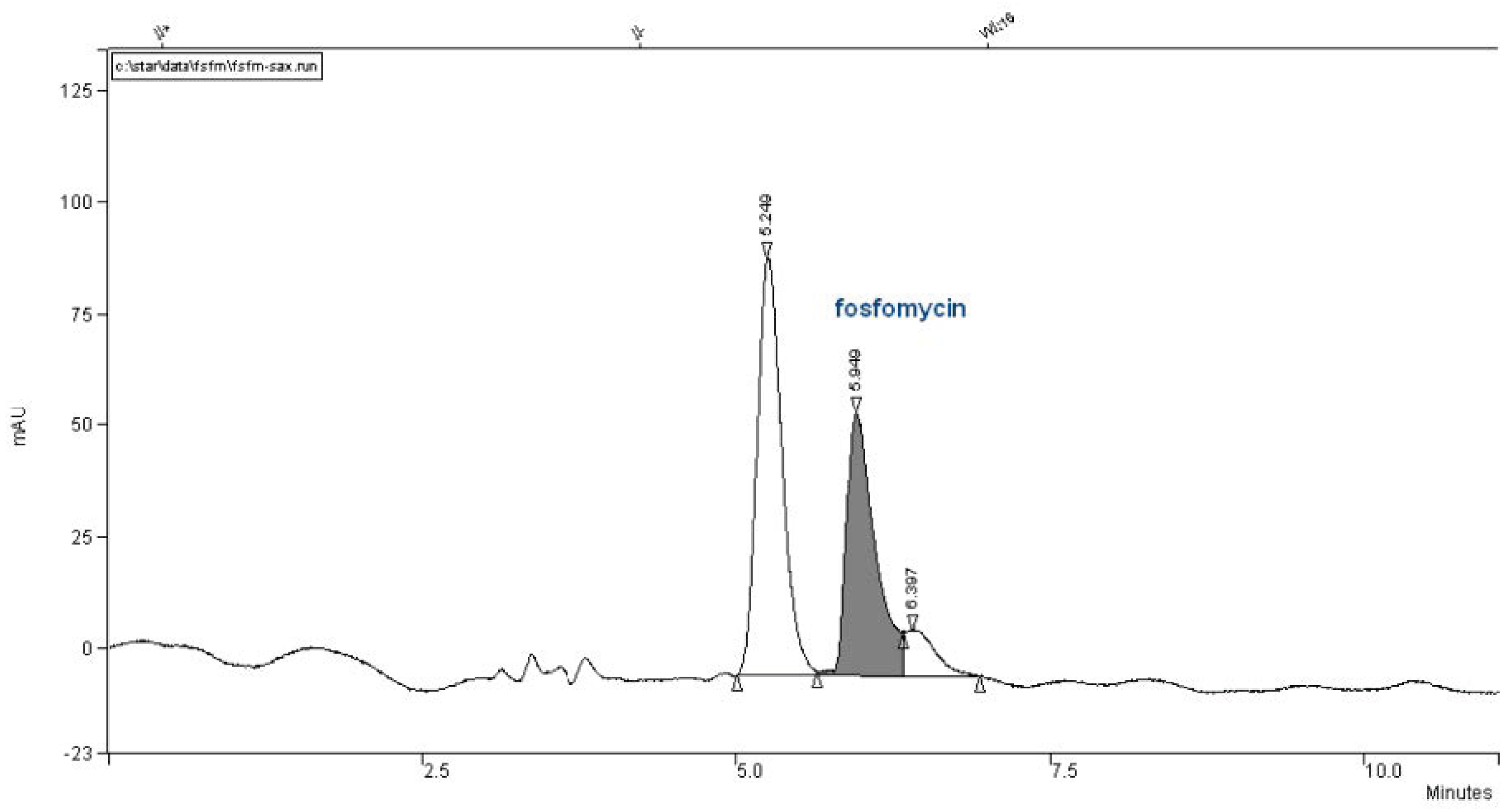 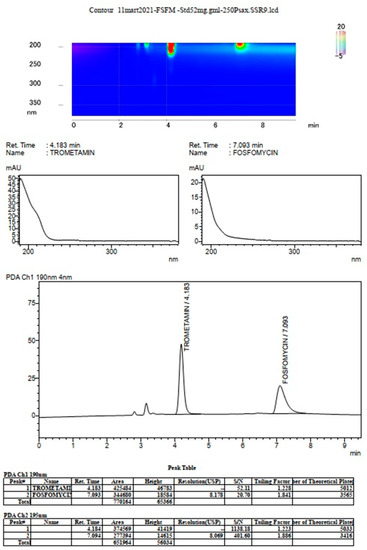 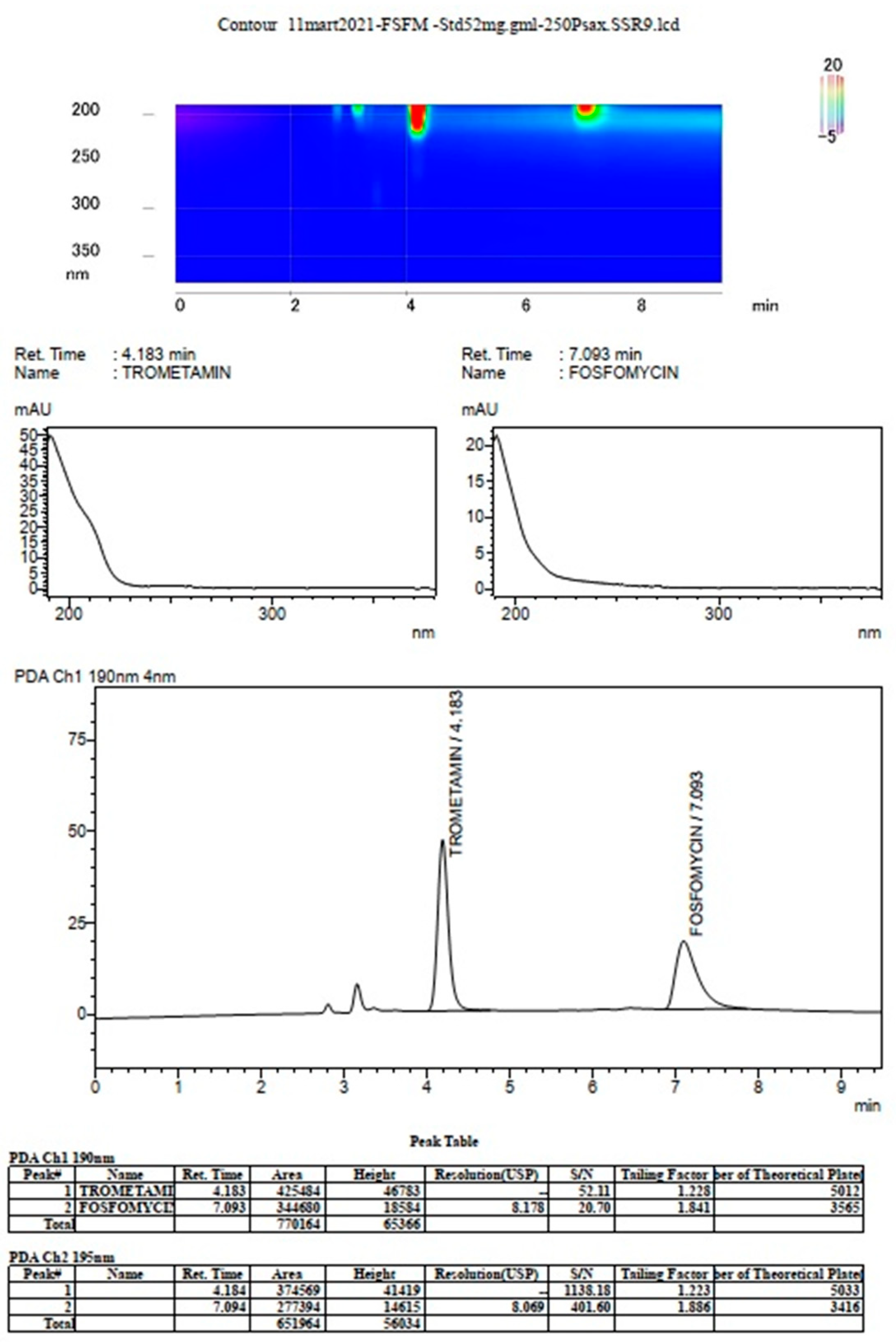 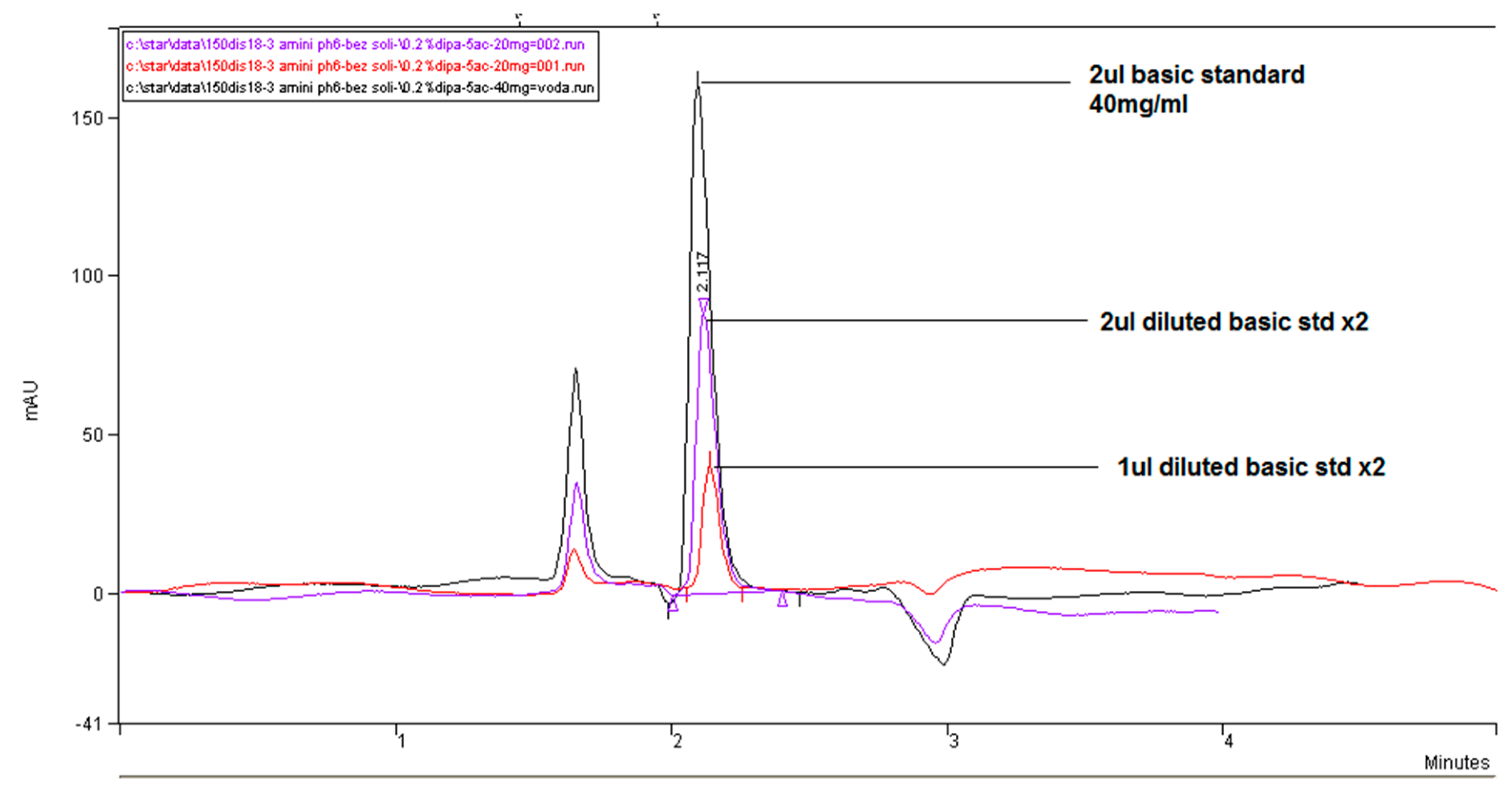 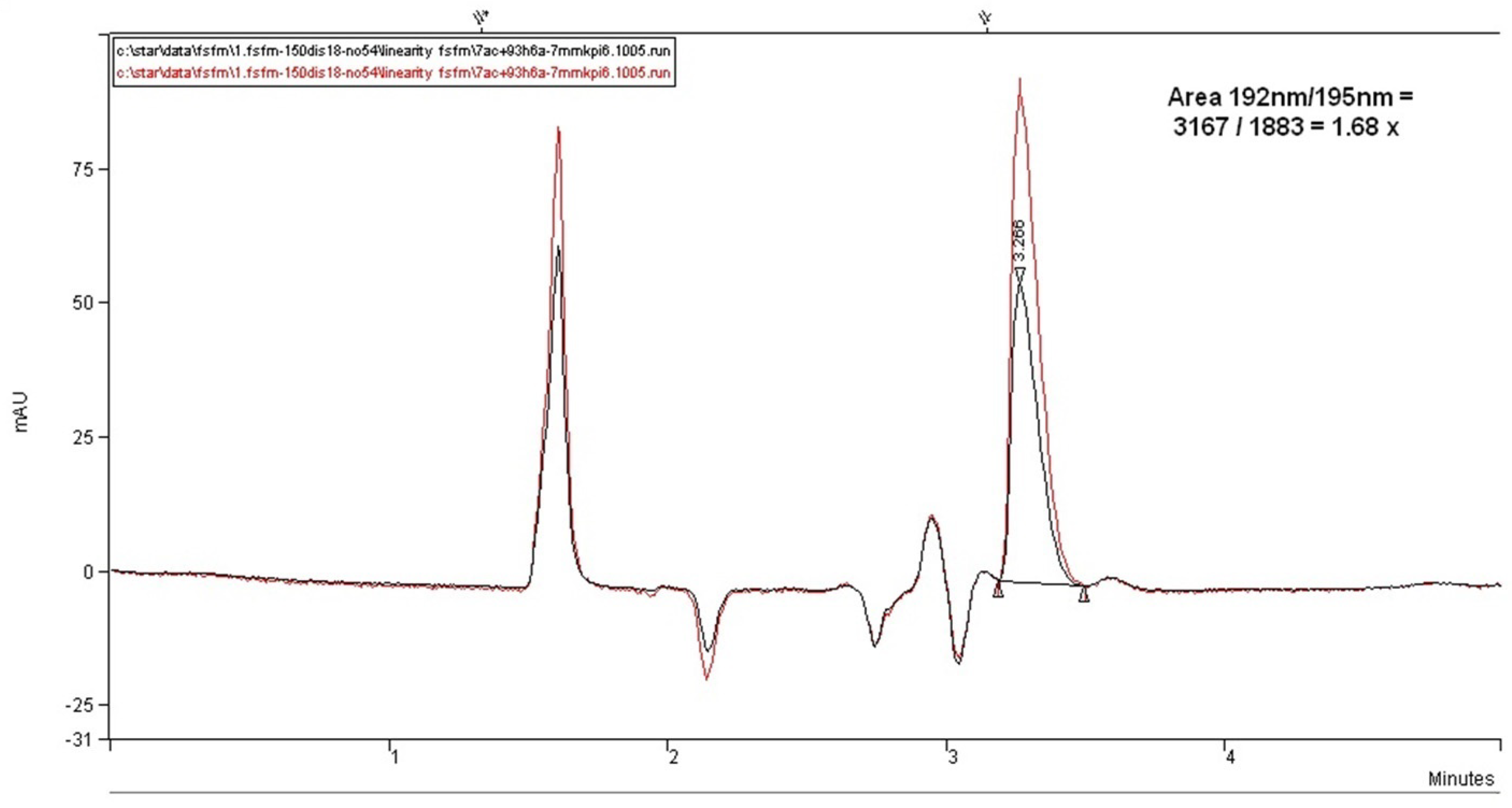 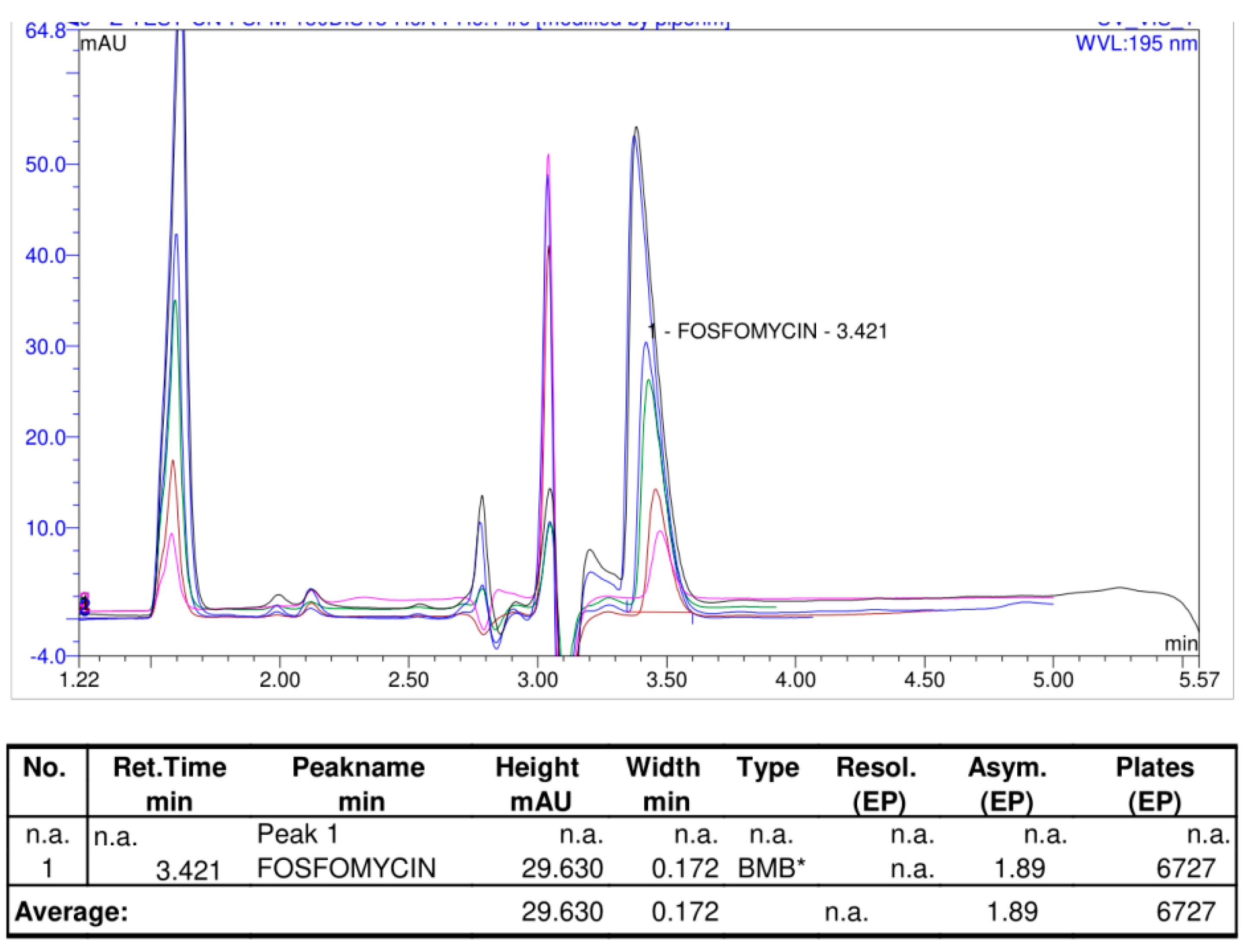 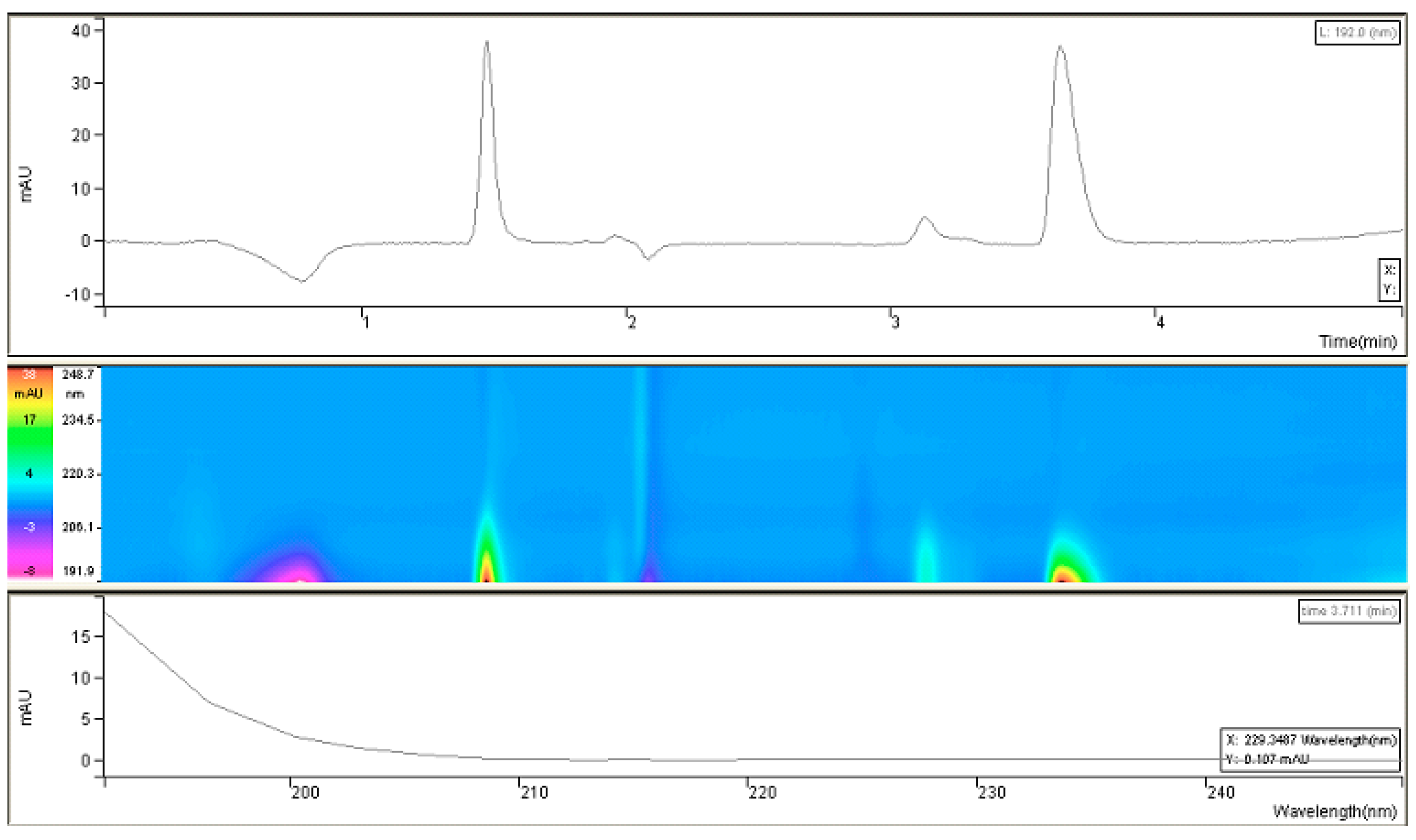 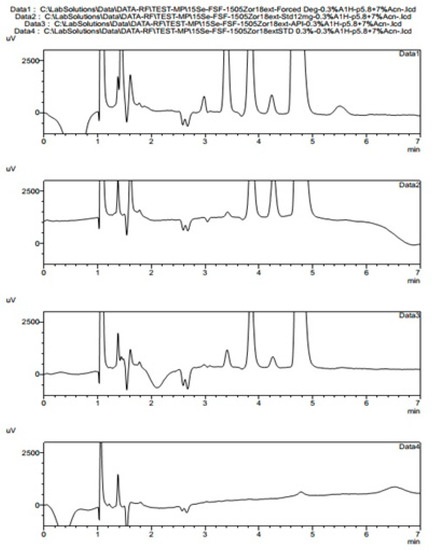 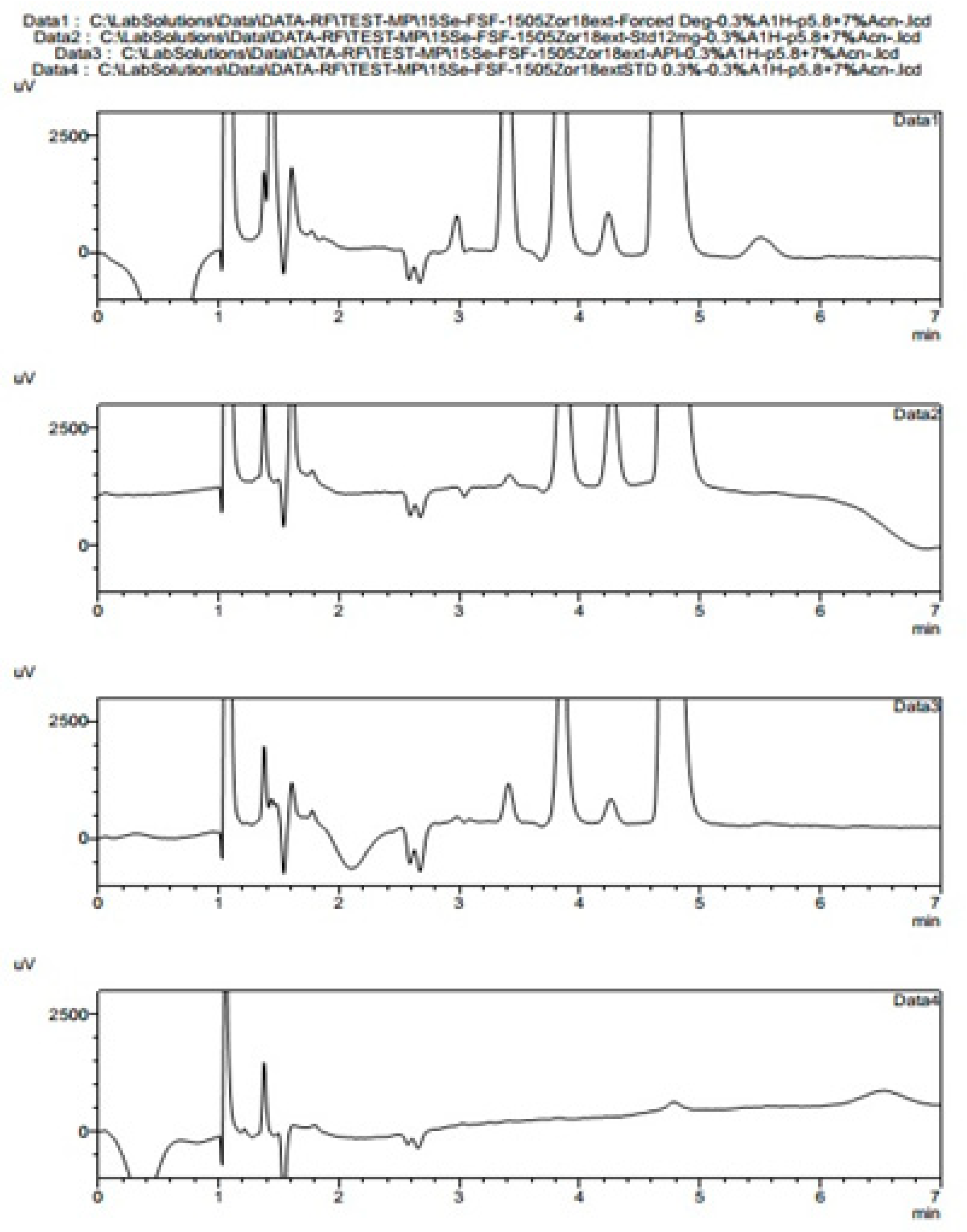