Optimized Methods for Analytical and Functional Comparison of Biosimilar mAb Drugs: A Case Study for Avastin, Mvasi, and Zirabev

Bevacizumab is a humanized therapeutic monoclonal antibody used to reduce angiogenesis, a hallmark of cancer, by binding to VEGF-A. Many pharmaceutical companies have developed biosimilars of Bevacizumab in the last decade. The official reports provided by the FDA and EMA summarize the analytical performance of biosimilars as compared to the originators without giving detailed analytical procedures. In the current study, several key methods were optimized and reported for analytical and functional comparison of bevacizumab originators (Avastin, Altuzan) and approved commercial biosimilars (Zirabev and Mvasi). This case study presents a comparative analysis of a set of biosimilars under optimized analytical conditions for the first time in the literature. The chemical structure of all products was analyzed at intact protein and peptide levels by high-resolution mass spectrometry; the major glycoforms and posttranslational modifications, including oxidation, deamidation, N-terminal PyroGlu addition, and C-terminal Lys clipping, were compared. The SPR technique was used to reveal antigen and some receptor binding kinetics of all products, and the ELISA technique was used for C1q binding affinity analysis. Finally, the inhibition performance of the samples was evaluated by an MTS-based proliferation assay in vitro. Major glycoforms were similar, with minor differences among the samples. Posttranslational modifications, except C-terminal Lys, were determined similarly, while unclipped Lys percentage was higher in Zirabev. The binding kinetics for VEGF, FcRn, FcγRIa, and C1q were similar or in the value range of originators. The anti-proliferative effect of Zirabev was slightly higher than the originators and Mvasi. The analysis of biosimilars under the same conditions could provide a new aspect to the literature in terms of the applied analytical techniques. Further studies in this field would be helpful to better understand the inter-comparability of the biosimilars. View Full-Text
Keywords: Bevacizumab; Mvasi; Zirabev; biosimilar drugs; analytical characterization; functional similarity; mass spectrometry; surface plasmon resonance Bevacizumab; Mvasi; Zirabev; biosimilar drugs; analytical characterization; functional similarity; mass spectrometry; surface plasmon resonance
►▼ Show Figures 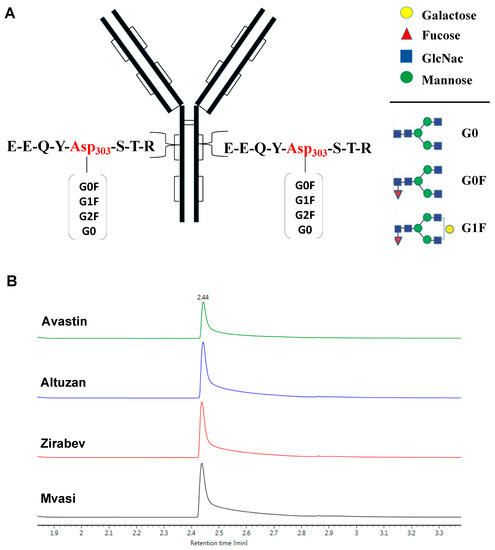