In Vitro Antifungal and Topical Anti-Inflammatory Properties of Essential Oil from Wild-Growing Thymus vulgaris (Lamiaceae) Used for Medicinal Purposes in Algeria: A New Source of Carvacrol

The immune system of the body protects and repairs cells from disease, especially infectious and chronic diseases. Modulation of the immune response requires an immunomodulator that can efficiently affect the humoral and cellular immune systems. The immune system can be divided into the innate immune system and the adaptive immune system [1]. Drugs often used as immunomodulators include immunostimulant and immunosuppressant drugs [2]. Alternative herbal medicine can be used to modulate and activate an immune response. Various herbal ingredients exhibit immunostimulatory activity. Indeed, several studies on the modulation and activation of the immune response by food containing dietary fiber have been published [3,4].
Herbal medicine that may be developed as an immunomodulatory agent is bengkoang (Pachyrhizus erosus), which has been proven to have antioxidant activity. Bengkoang contains nutrients and chemical compounds that could potentially be developed as functional food and phytotherapy. Bengkoang contains vitamin C, vitamin B1, protein, and a relatively large amount of dietary fiber. Bengkoang has a low caloric value of 39 kcal/100 g because it contains inulin [5]. Noman et al. [5] reported that bengkoang contains 14.9% carbohydrates and 1.4% fiber; the herb also contains isoflavonoid compounds such as daidzein and furanyl pterocarpan, which are believed to be potential antioxidant sources [6]. According to Ramirez-Santiago et al. [7], bengkoang contains pectin and hemicellulose polysaccharides, both of which show potential immunomodulatory activity.
Several investigations on the immunomodulatory activity of bengkoang fiber extract (BFE) have been reported. BFE could enhance immune system through the mitogen-activated protein kinase (MAPK) and nuclear factor (NF)-κB pathways [8], enhance the phagocytic activity of macrophages, and stimulate the production of TNF and IL-6 on murine macrophage-like J774.1 cells [9]. BFE exerts immunomodulatory effects in vitro and in vivo by increasing immunoglobulin G (IgG), IgA, and IgM levels and IL-5 and IL-10 production [10]. Our previous study on water-soluble fiber and some of its fractions from bengkoang (P. erosus) showed that BFE and BFE-B contained pectin-like compound and could enhance phagocytic activity and modulate cytokines production in vitro [11]. However, to date, no report on the immunomodulatory effect of the water-soluble fiber fraction of P. erosus in mice induced by hepatitis B vaccine is yet available. Therefore, in the present study, the water-soluble fiber fraction of bengkoang was purified to increase the selectivity of its active compound as an immunomodulator to develop the applications of natural herbs further. The present study aimed to determine the immunomodulatory effects of water-soluble fiber, BFE and BFE-B on mice induced by hepatitis B vaccine.

Male BALB/c mice, 6–8 weeks old and weighing approximately 25–30 g, were obtained from the Animal Center of Pharmacology and Toxicology Laboratory, Universitas Gadjah Mada. All animals were acclimatized for one week before experimentation and housed in an animal room with a temperature of (22 ± 3) °C and humidity of 60% under a 12-h light/dark cycle. A standard pelleted basal diet and water were provided ad libitum. Animals were randomized into experimental and control groups. All experimental procedures were approved by the Institutional Animal Ethics Committee of the Integrated Research and Testing Laboratory, Universitas Gadjah Mada (No. 00073/04/LPPT/VII/2018).

2.4. Preparation of the Soluble Fibers of P. erosus Tubers

The P. erosus tubers were peeled, mashed and dissolved in distilled water (1:2) overnight, and then centrifuged to separate the starch and fiber (Figure 1). The precipitate was separated, and the supernatant was collected for further treatment. The supernatant was evaporated in a water bath for 30 min, immersed in 80% ethanol (1:1), filtered, and evaporated at 60 °C for 20 min. After filtration, the precipitate was freeze-dried until a dry powder was obtained. This product was designated BFE [9]. Exactly 100 g of BFE was added with 0.5% (w/v) ammonium oxalate solution (1:2), heated in boiling water bath for 30 min, centrifuged at 1400× g for 5 min, and then filtered. Cold ethanol (−20 °C, 4×) was mixed with the supernatant at (5 ± 2) °C for 12 h. The mixture was subsequently centrifuged at 1400× g for 5 min, and the precipitate was freeze-dried. The resulting fiber fraction was designated BFE-B [7,12].

In vivo immunomodulatory activity was evaluated using the posttest-only control group design method with a randomized directional pattern design (Figure 2). Thirty male mice were randomly divided into six groups, each consisting of five animals. All of the mice were injected with hepatitis B vaccine (20 µg/mL) intraperitoneally (i.p.) at a volume of 2.6 µL/20 g BW on days 7 and 14 [13]. The mice were then treated orally for 18 days. Group 1 was given 0.5% CMC-Na, group 2 was given 2.5 mg/kg BW levamisole, groups 3 and 4 were, respectively, given 50 and 100 mg/kg BW BFE, and groups 5 and 6 were respectively given 25 and 50 mg/kg BW BFE-B. In the present study, levamisole was used as a positive control. Levamisole could stimulate phagocytic capacity, increase NO production by macrophages, and induce lymphocyte proliferation. Thus, levamisole is a drug that could modulate cellular immune responses. On day 19, the mice were anesthetized with 180 mg/kg BW ketamine intraperitoneally (i.p.) for blood sampling. Mice were then sacrificed and peritoneal macrophages and spleen were taken out. Assessments of spleen index, phagocytic activity, nitric oxide (NO) production, lymphocyte proliferation, and TNF-α, IL-10, and IgG production were then conducted.

The skin of the abdomen was cut open, and the peritoneal cavity was injected with 10 mL of RPMI. The peritoneal fluid containing macrophages was then removed, centrifuged at 1500 rpm and 4 °C for 10 min, and resuspended in 5 mL of complete medium. A cell suspension with a density of 2.5 × 106 cells/mL was cultured in 24-well plates fitted with spherical coverslips. Each well contained 200 µL (5 × 105 cells) of the suspension and was incubated in a CO2 incubator at 37 °C overnight. Thereafter, the medium in each well was collected for further treatment (NO production assay) and incubated in a CO2 incubator at 37 °C for 4 h. After incubation, a suspension of 200 µL of latex beads (2.5 × 107 beads/mL) was placed in each well and then incubated in a CO2 incubator at 37 °C for 60 min. The cells were washed with PBS (3×), dried, and fixed with methanol for 30 s. After drying, the coverslips were painted with 20% (v/v) Giemsa reagent for 30 min, washed with distilled water, and then dried once more. The number of macrophages on the slides was observed with a microscope at 400× magnification. One hundred macrophage cells were observed, and the numbers of macrophages that successfully phagocyted the latex particles (as a measure of phagocytic capacity) and latex beads that were phagocyted by macrophages (as a measure of phagocytic index) were counted [14].

The NO production is measured by measuring nitrite concentrations in macrophages cell supernatants using Griess reagents. The standard nitric oxide (NO) solutions were prepared by dissolving 69.0 mg of sodium nitrite in 100 mL aquabidest to produce a 2000 μM standard NO solution and then diluted to obtain a series of standard NO solutions with concentrations ranging from 0 µM to 100 µM. A total of 100 µL of each macrophage cell culture that had been incubated overnight was placed in wells and then 100 µL of Griess reagent (1% sulfanilamide in 5% phosphoric and 0.1% N-(1-naphthyl) ethylenediamine dihydrochloride in water) was added. The mixtures were then incubated at room temperature for 15 min, and the absorbance of each well was determined at 550 nm using a microplate reader. The amount of nitrite in the sample was calculated by plotting to a standard curve of sodium nitrite concentration (0–100 µM).

On day 19, after the final administration of water-soluble fibers, mice were sacrificed, and the spleen was dissected and weighed. The spleen index was then determined as follows:

As much as 10 mL of RPMI was injected into the spleens of the mice until all of the lymphocytes were completely extracted. The suspension was placed in a microtube tube and centrifuged for 10 min at 1500 rpm and 4 °C. The pellets were hemolyzed two times using a lysis buffer and the centrifuge at 3000 rpm and 4 °C for 4 min. The supernatant was removed, and the precipitant was collected so that it contained the lymphocytes inoculated into the RPMI 1640 medium, penicillin-streptomycin 2%, fungizone/amphotericin B (GIBCO) 0.5%, and fetal bovine serum (GIBCO) 10%. A suspension of lymphocyte cells with a density of 1.5 × 106 cells/mL was cultured in a 96-multiwell plate and incubated in a CO2 incubator at 37 °C for 48 h. Cell viability was measured by tetrazolium salt (MTT) assay, and the optical density (OD) of each well was determined using a microplate reader at a wavelength of 550 nm.

Blood samples were collected through the retro-orbital plexus into capillary tubes and then allowed to stand for 2 h at room temperature. Blood was centrifuged at 4000 rpm at 25 °C for 20 min to obtain the serum. Determinations of TNF-α, IL-10, and IgG levels in the serum were carried out using the corresponding mouse ELISA kits according to manufacture protocol.

Data were presented as mean ± standard error of the mean (SEM), and statistically significant differences between groups was analyzed by one-way analysis of variance or the Kruskal–Wallis test followed by the Least Significant Difference (LSD) or Mann–Whitney test. Statistical analysis was performed using SPSS version 25, and p < 0.05, p < 0.01, and p < 0.001 were considered to indicate statistically significant differences.

NO was produced and released from peritoneal macrophages to the medium after incubation for 24 h. The NO concentrations detected in each group are presented in Table 2.
The administration of BFE showed a tendency to increase NO production, but not significantly different to control. However, administration of BFE-B (25 and 50 mg/kg BW) and levamisole could activate NO production and significantly increased NO concentrations by 7.4 (p < 0.001; p < 0.01) and 4.5-fold (p < 0.05) compared to the control, respectively (Table 2). These results also demonstrate the dose-dependent effect of BFE-B. NO production in mice treated with BFE-B was higher than that in mice treated with BFE and levamisole.

In this study, the spleen index was determined by weighing the spleen and comparing it with the body weight of the mice. The spleen indices of different groups are illustrated in Figure 4. The spleen index increased in all treatment groups. Among the treatments studied, the treatment with 25 mg/kg BW BFE-B resulted in the highest increase in spleen index, and differences between this group and the control were significant (p < 0.001). This result shows that the administration of water-soluble fiber for 18 days could increase the immune response of mice induced by hepatitis B vaccine.

As shown in Figure 7, increased IgG levels were observed after administration of 2.5 mg/kg BW levamisole, but no significant difference compared with the control was found. BFE treatments of 50 and 100 mg/kg BW showed no effect on IgG levels. However, the IgG titer significantly increased after treatment with 25 and 50 mg/kg BW BFE-B (p < 0.05).

In our study, we provided evidence that the water-soluble fiber of P. erosus, BFE and BFE-B exerts immunomodulatory effects. We reported for the first time that water-soluble fiber fraction from P. erosus, BFE-B, stimulated phagocytotic macrophages, NO production from peritoneal macrophages, and lymphocyte proliferation in vivo. The increased phagocytic activity of macrophages was evidenced by enhancements in phagocytic capacity and index, which are characterized by increased NO, IL-10, and TNF-α production. Increased lymphocyte proliferation triggers an increase in IgG production in mice after induction by hepatitis B vaccine. All our findings suggest that oral administration of water-soluble fiber from bengkoang, BFE, and BFE-B, could modulate the dynamic change in immunomodulatory effect resulting in the modulation of innate and adaptive immune responses in mice. Hence, it would be suggest that bengkoang may have beneficial effect on prevention on human health of immune-system related diseases.

This research was funded by the Ministry of Research Technology and Higher Education of the Republic of Indonesia, International Research Collaboration and Scientific Publication, under Grant No. 1672/UN1/DITLIT/DIT-LIT/LT/2018.

The authors thank Takuya Sugahara from Ehime University for collaborating in this research. 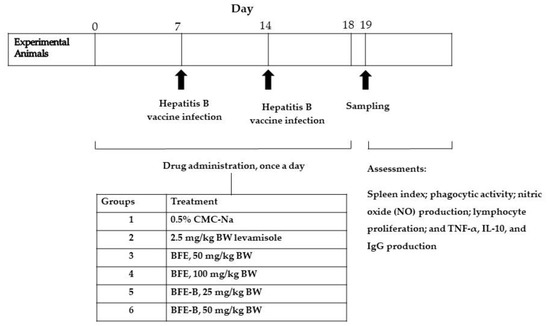 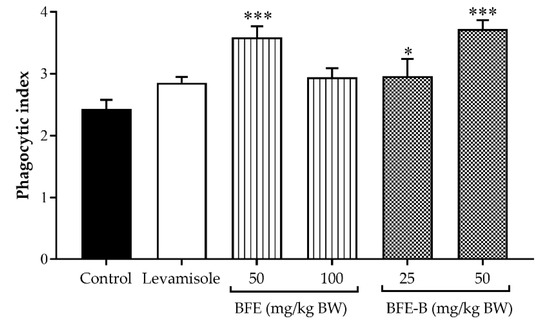 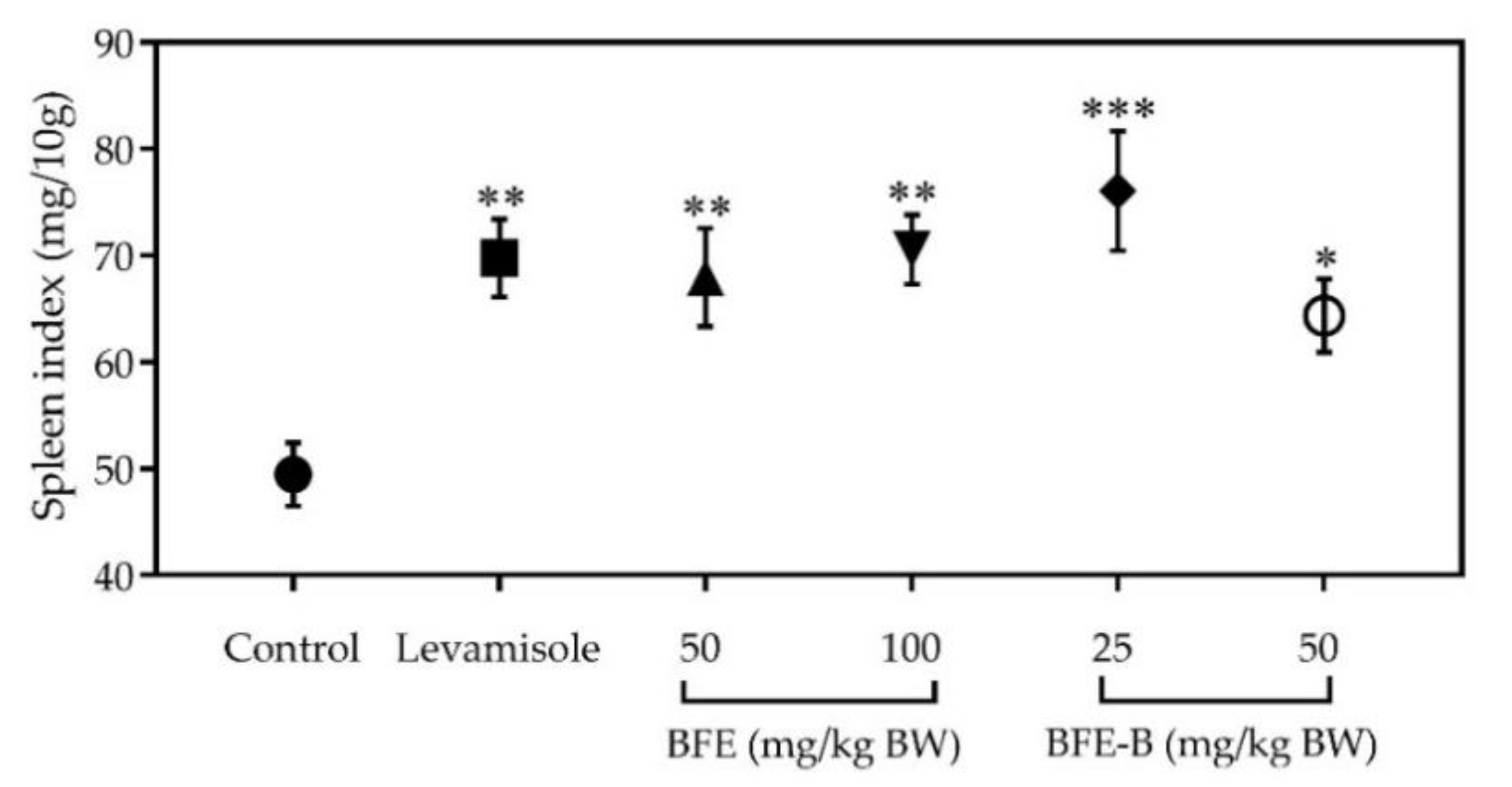 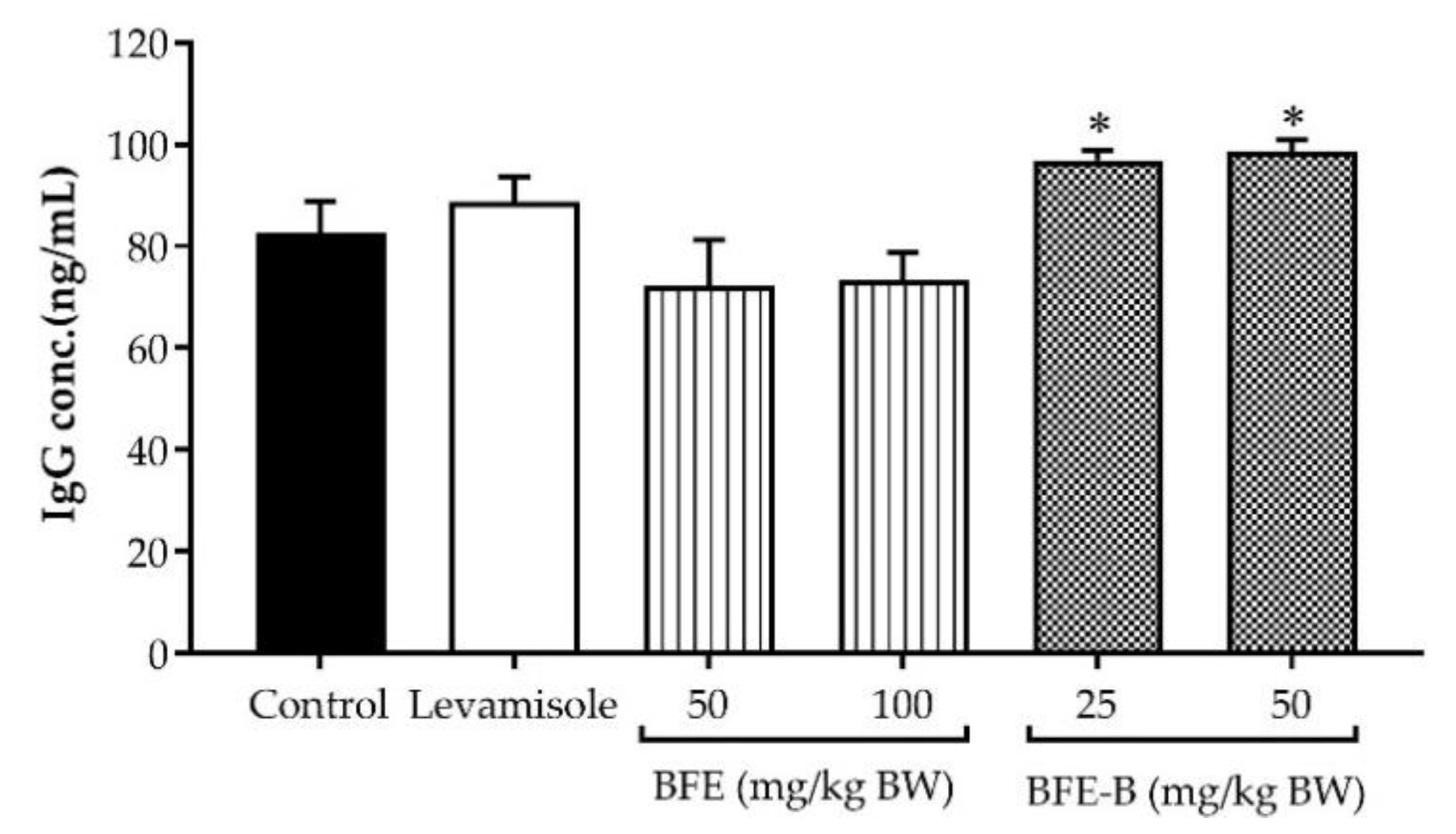