In Vitro Antifungal and Topical Anti-Inflammatory Properties of Essential Oil from Wild-Growing Thymus vulgaris (Lamiaceae) Used for Medicinal Purposes in Algeria: A New Source of Carvacrol

The aim of this study is to investigate the Thymus vulgaris essential oil (TVEO) as an antifungal agent in aromatherapy and/or as an active ingredient in the prevention or management of topical inflammatory diseases. The chemical composition of TVEO was determined with gas chromatography and revealed the presence of 25 compounds. Carvacrol was found to be the major component (56.8%). Antifungal action of TVEO was determined in vitro by using different methods. By the disc diffusion method, TVEO showed more potent antifungal activity against Candida strains than the positive control. The diameter of inhibition zone (DIZ) varied from 34 to 60 mm for Candida yeasts. Significantly higher antifungal activity was observed in the vapor phase at lower quantities. Candida albicans and C. parapsilosis were the most susceptible strains to the oil vapor with DIZ varying from 35 to 90 mm. The minimum inhibitory concentrations (MIC) of yeast were determined with an agar dilution method and revealed that MIC varied from 0.3 to 0.15 µL/mL for yeast species. The topical anti-inflammatory potential of TVEO was also explored in vivo with the croton oil-induced ear edema assay. TVEO exhibited a potent anti-inflammatory effect at all doses (100, 10 and 2 mg/kg), which were statistically similar (p > 0.05) to the positive control. This activity was also confirmed at the cellular level with histopathology analysis. Our results suggest the potential application of this carvacrol-rich TVEO in the prevention and management of fungal infections and topical inflammation and deserve further investigation for clinical applications. Furthermore, while the mode of action remains mainly undetermined and should be studied. View Full-Text
Keywords: natural antifungal; topical anti-inflammatory; carvacrol-rich essential oil; Thymus vulgaris; chemotype natural antifungal; topical anti-inflammatory; carvacrol-rich essential oil; Thymus vulgaris; chemotype
►▼ Show Figures 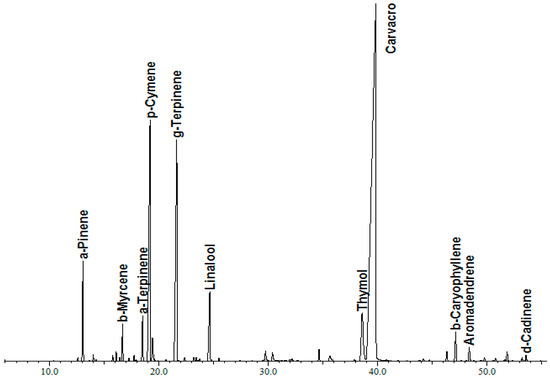