To investigate combined effect of the anticancer drug cisplatin (CP) and the opiate analgesic morphine (MOR) on liver, rats were administered MOR (10 mg/kg/day i.p. for 10 days), with or without CP (7.5 mg/kg i.p. once at day 5 of the study). MOR or CP alone caused deterioration of liver function tests and induced damage to histological architecture of liver. In addition, each drug alone caused hepatic oxidative stress, as evident by significant increase of malondialdehyde and nitric oxide, as well as the significant decrease in GSH, catalase and SOD compared to control. Administration of either MOR or CP also caused liver inflammation, evident by the increase in the pro-inflammatory cytokines; TNF-α and IL-6. In addition, either MOR or CP induced liver apoptosis, as shown by significant increase in expression of the pro-apoptotic marker; caspase 3 compared to control. Either MOR or CP also caused up-regulation of the efflux transporter P-glycoprotein (P-gp). Combining MOR with CP caused deterioration in all parameters tested compared to CP alone. Thus, treatment with MOR worsened CP-induced hepatotoxicity through oxidative stress, inflammation and apoptosis mechanisms. In addition, both drugs contributed to the up-regulation of P-gp, which might be a new mechanism for their hepatotoxic effects.
Keywords: cisplatin; hepatotoxicity; IL-6; morphine; P-glycoprotein; TNF-α cisplatin; hepatotoxicity; IL-6; morphine; P-glycoprotein; TNF-α

Hepatotoxicity is one of the major side effects of cancer chemotherapy, especially when using one of the platinum-based drugs as cisplatin (CP) [1]. To date, the mechanisms involved in CP-induced hepatotoxicity are not fully elucidated. Oxidative stress has been one of the factors suggested [2], mainly due to the direct effect of CP toxic metabolites on the tissues, causing the generation of reactive oxygen species that consume the antioxidant defenses of the liver. In addition, several pro-inflammatory cytokines have been shown to increase after CP treatment [3,4], suggesting a strong role of inflammation as a mechanistic process in CP-induced hepatotoxicity. Administration of CP was also reported to induce hepatic programmed cell death as evident by up-regulating a number of pro-apoptotic markers [5,6].
In addition to hepatotoxicity, CP might cause chemotherapy-induced neuropathic pain as a side effect [7], which may be a limiting factor for continuation of CP use as an anticancer drug. In many cases, the pain might be too severe to endure without administration of strong analgesics, as opioids. Thus, morphine (MOR), the prototype of opiates, might be used concomitantly with CP for treatment of its chemotherapeutic-induced pain [8]. However, to date, the effect of combining MOR with CP on the liver has not yet been explored.
P-glycoprotein (P-gp), also called multidrug resistance 1 (MDR1) transporter protein, is a member of ATP-binding cassette (ABC) superfamily, encoded by ABCB1 gene, and acts as an active efflux transporter that actively pumps its various substrates across sanctuary membranes at the expense of ATP [9]. In the liver, P-gp is expressed in the canalicular membrane of the liver, and acts as an efflux transporter for its various xenobiotic substrates from the intracellular compartment of hepatocytes to be excreted in bile [10]. MOR has been reported as one of the substrates of P-gp [11]. The aim of the current study was to investigate the effect of administration of MOR concomitantly with CP on the liver, and to explore the mechanisms involved. In addition, the current study aimed at examining the effect of MOR and/or CP on hepatic P-gp level.

Male Wistar rats of 165–200 g were left to acclimatize for one week in a standard laboratory animal house under controlled conditions, with free access to chow and water. Ethical approval of the animal protocol was issued by the Institutional Review Board of Princess Nourah bint Abdulrahman University, Saudi Arabia (IRB number 17-0194). Animals were allocated into four groups (n = 10); control group, MOR-treated group receiving 10 mg/kg/day of MOR i.p. for 10 days [12], CP-treated group receiving a single i.p. of 7.5 mg/kg CP at day 5 of the experiment [13], and combined MOR/CP-treated group receiving both drugs as described.

At the end of the experiment, animals were fasted over-night and weighed, then blood was sampled, centrifuged at 3000× g for 10 min, and the sera were collected for measurement of biochemical parameters. After animal sacrifice, liver was excised, washed with normal saline and weighed. Liver index was calculated according to the following equation: (Liver index = liver weight/total body weight × 1000). A small slice from each liver was cut and fixed in 10% neutral buffered formalin. These sections were dehydrated using a range of ethanol from 70% to 100%, and then cleared in xylene. The tissues were embedded in paraffin blocks and cut by a microtome into 5 μm thick sections to be mounted on glass slides for examination under light microscope and for immunohistochemical staining. The rest of the liver tissues were homogenized in 20% w/v ice-cold phosphate buffer (0.01M, pH 7.4) by Glas-Col homogenizer. After homogenization, centrifugation was performed for 15 min at 3000× g at 4 °C to obtain the supernatant, which was aliquoted and kept frozen at −20 °C until used.

Using commercial diagnostic kits for colorimetric analysis, liver function was assessed by evaluating serum ALT, AST, ALP, total bilirubin and albumin, in accordance to the kits manufacturer’s instructions. In liver homogenate, several oxidant/antioxidant stress markers were evaluated. To determine tissue content of lipid peroxidation products, malondialdehyde (MDA) was assessed in liver homogenate through biochemical evaluation of its equivalent thiobarbituric acid reacting substance by spectrophotometric measurement, employing 1,1,3,3-tetramethoxypropane as standard [14]. For evaluation of the level of nitric oxide (NO), total nitrate/nitrate was used because they are the stable oxidation products of NO, as NO itself cannot be measured due to its short half-life. Total nitrate/nitrite was determined using Griess reaction, where nitrate is converted to nitrite by copperized cadmium granules [15]. For evaluation of GSH, a kit was used, whose principal depended on that the -SH component of GSH interacted with Ellman’s reagent (5,5-dithio-bis-2-nitrobenzoic acid) generating 5-thio-2-nitrobenzoic acid with yellow color that could be detected colorimetrically (Beckman DU-64 UV/VIS spectrophotometer). Kits were also used to determine the enzymatic activity of catalase and SOD (shown in terms of U/mg protein) in liver homogenate in accordance to the manufacturer’s instructions.

Liver specimens were stained using hematoxylin and eosin (H&E) dyes and were examined under light microscopy (Olympus CX41) for detection of any degeneration, necrosis, sinusoidal dilatation, biliary hyperplasia, liver cell vacuolation or cellular infiltration. Liver pathological features were scored as previously described [16], where 3 fields from each rat were analysed and considered normal (score 0) if the pathological findings were seen in less than 25% of the total fields, and considered mildly (+), moderately (++) or severely (+++) affected if they showed pathological changes of 25 to less than 50%, 50% to less than 75%, or 75% or more, respectively.

Liver tissue sections were pre-treated with Triology reagents for de-paraffinization, re-hydration, and antigen revealing. The ready-to-use rabbit polyclonal antibody against caspase 3 was applied to the slides as it is in accordance with the manufacturer’s specification. Slides were incubated with the antibody for 18 h at 4 °C, and then, after washing, incubated for 30 min with the secondary antibody (1:2000 biotinylated goat anti-rabbit). Additional 30 min incubation was performed in vectastain ABC reagent, followed by 6 min incubation in diaminobenzidine to give brownish discoloration of immunopositive sites. Mayer hematoxylin was used as a counter-stain before microscopic examination. For semi-quantitative analysis of the immunohistochemical results, ImageJ 1.41 (freeware; rsbweb.nih.gov/ij) was used to calculate total number of cells in a field by counting hematoxylin-positive and immunopositive cells. Data were presented as the mean of counting three fields from each rat and were expressed as percentage of immunopositive cells in comparison with the total number of cells.

2.7. Determination of TNF-α, IL-6, and P-gp in Liver Tissue Homogenate

The pro-inflammatory cytokines TNF-α and IL-6 levels, as well as the level of the efflux transporter P-gp were determined in rat liver homogenate according to the manufacturer’s instructions of their respective commercial ELISA kits. The color changes were detected using an ELISA 96-wells plate reader spectrophotometrically at a wavelength 450 ± 10 nm. Concentrations of TNF-α, IL-6 or P-gp in the liver homogenate samples were calculated by comparing their optic densities to the standard curve.

Results were represented in terms of means ± S.E.M. and their statistical analysis was performed using GraphPad Prisms 5.00 for Windows (San Diego, CA, USA), by one-way analysis of variance (ANOVA), followed by Tukey-Kramer post analysis. The results were considered of significance if the p value was less than 0.05.

3.1. Effect of MOR on Liver Index and Hepatic Function in CP-Induced Toxicity

3.2. Effect of MOR on Hepatic Oxidant/Antioxidant Markers in CP-Induced Toxicity

3.3. Effect of MOR on Liver Microscopic Features and Caspase 3 Regulation in CP-Induced Toxicity

Microscopically, the liver in the control showed normal hepatic architecture (Figure 1A). On the other hand, the liver microscopic picture of MOR-treated group had large areas of enlarged vacuolated hepatocytes (Figure 1B), while that of the CP-treated group mostly showed dilated liver sinusoids with sporadic necrotic areas (Figure 1C). The histopathologic picture of the liver in the combined MOR/CP-treated group showed even more profound injuries than either treatment alone (Figure 1D). The results were semi-quantitatively scored to confirm these findings (Table 3). For caspase 3, the control group showed minimal background expression of the apoptotic marker (Figure 2A). On the other hand, either MOR or CP treatments alone caused up-regulation of caspase 3 expression by 9- or 17-folds higher levels (Figure 2B,C), respectively, compared to control. The combined treatment of MOR/CP caused synergistic up-regulation of about 34-folds of the control (Figure 2D) which was significantly different compared to CP alone, as evident by the semi-quantitative analysis performed (Figure 2E).

3.4. Effect of MOR on Liver TNF-α, IL-6 and P-gp Levels in CP-Induced Toxicity

Conceptualization; Methodology; Analysis; Writing; Project Administration; Funding Acquisition, A.A.K.E.-S. The author has read and agreed to the published version of the manuscript.

This research was funded by Deanship of Scientific Research at Princess Nourah bint Abdulrahman University (Grant No# 240/S/39). 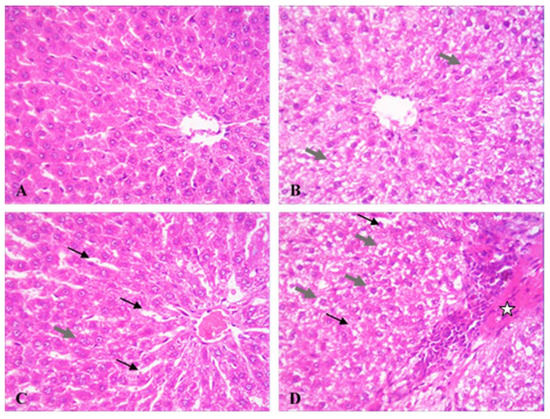