Structural Insight into the In Vitro Anti-Intravasative Properties of Flavonoids

Intravasation through the lymphatic border is an early- and rate-limiting step in the metastatic cascade of breast cancer [1,2,3]. Yet, hardly any anti-metastatic drugs are available. As from 1981 to 2014 approximately 83% of the approved small molecule anticancer drugs were natural products, based on natural compounds or mimicking them in different ways [4]. We tested traditional medicinal plants regarding their anti-intravasative properties [5,6,7,8]. In a study on the effects of different Scrophularia extracts on breast cancer cells´ proliferation, cell death, and intravasation through lymph endothelial cell barriers, a methanolic extract of Scrophularia lucida L. (Scrophulariaceae) proved particularly active in inhibiting intravasation in vitro [8]. An activity-guided fractionation of this extract revealed hispidulin, a member of the class of flavonoids, as significantly contributing to this activity [9].
Because of the multitude of structures and amounts of flavonoids in human nutrition, these compounds have gained a lot of interest for the prevention, deceleration of development, or even alleviation of different “Western Diseases” such as cardiovascular or neurodegenerative disorders as well as various cancers. For flavonoids in cancer chemoprevention numerous modes of action, modulation of a multiplicity of proteins and inhibition of many enzymes involved in cancer pathology have been shown [10]. Among those, different mechanisms involving many steps in the “metastatic cascade” influencing cell detachment, cell mobility, tissue barriers for intravasation and extravasation, angiogenesis etc., were studied in detail and many molecular targets involved in the anti-invasive and anti-metastatic properties of flavonoids such as luteolin, apigenin, kaempferol among others have been identified [11].
Nevertheless, for an activity-guided search for effective natural anticancer compounds (e.g., flavonoids) inhibiting mechanisms of metastasis, robust in vitro tools simulating the in vivo situation are necessary. For this purpose 3D multicellular tumor spheroids as used in the validated “circular chemorepellent-induced defect” (CCID) assay provide an excellent possibility [12]. Until now, data of the efficacy of flavonoids in this assay are scarce and only few flavonoids have been tested on breast cancer intravasation [1,3,9,13,14,15,16]. Yet, the IC50 of hispidulin was too high to be reached in vivo [9]. Therefore, to gain insight into structural features influencing the anti-intravasative potential of flavonoids, we compared hispidulin to 20 other structurally closely related flavonoids in this 3D assay consisting of MCF-7 cell spheroids and lymph endothelial cell (LEC) monolayers.

All experiments were performed in triplicate and analyzed by One-way ANOVA together with Tukeys post-hoc test with GraphPad Prism 5.0 program (San Diego, CA, USA).

For the determination of the efficacy of flavonoids on the inhibition of lymph endothelial disintegration in the CCID assay in total 18 flavonoids were compared (Table 1).
Among those were four flavanones and ten flavones and four flavonols with different degrees of hydroxylation and/or methoxylation. All compounds possessed the typical 5,7-dihydroxy- pattern. The differences applied to hydroxylation in positions 3′, 4′, 6, and/or 8. One compound each with a methoxy group in positions 3′, 4′, or 8, as well as two compounds with a methoxy group in position 6 were included into the series. Three concentrations (10, 25 and 50 or 75 µM) of each compound were tested (Supplemental Figure S2a) and the effects were compared to Bay11-7082 (Supplemental Figure S2b), an irreversible inhibitor of I-κBα phosphorylation and of CCID formation [2], for which an IC50 of 7.2 µM was determined.
The results showed that flavanones, lacking the double bond between positions 2 and 3, have obviously no or very little effect on the inhibition of CCID formation. This was independent of the degree of hydroxylation in ring B (no OH (pinocembrin, 1), 4′-OH (naringenin, 2) or 3′,4′-diOH (eriodictyol, 3)). Only homoeriodictyol (4) with a 3′-methoxy-4′-hydroxy pattern resulted in a very high IC50 value of 99.5 µM.
In contrast, the corresponding flavones chrysin (5, IC50 24.8 µM), apigenin (11, IC50 34.1 µM), and luteolin (14, IC50 19.3 µM) were the most active compounds. Unexpectedly, 14 with the lowest logP among these flavones showed the highest activity. Additional hydroxylation in position 3 in the flavonols galangin (6) and kaempferol (12) led to slightly higher IC50 values as compared to 5 and 11. Interestingly, quercetin (17), the 3′,4′-di-OH-flavonol corresponding to the 3′,4′-di-OH-flavone 14 remained without any activity. Gossypetin (18) with an additional 8-OH group as compared to 17 was inactive as well.
Methylation of the 4′-OH group in 14 to diosmetin (15) significantly decreased the activity to approximately one-tenth (IC50 183.2 µM).
Additional hydroxylation of the flavones in positions 6 or 8 also reduced the activity: only baicalein (7; 6-hydroxy-chrysin) showed a weak effect (IC50 130.2 µM) whereas norwogonin (9; 8-hydroxy-chrysin) was not active.
Methylation of the 6- or 8-OH groups in oroxylin A (8; 6-O-methyl-baicalein), wogonin (10; 8-O-methyl-norwogonin), and hispidulin (13; 6-O-methyl-scutellarein) resulted in an increase in the activity as compared to the respective unmethylated compounds with IC50 values of 74.8 µM, 113.9 µM, and 88.6 µM, respectively.
In comparison to 14, the most active compound, and its 4′-O-methylderivative 15, with only one-tenth of its activity, the 6-methoxyderivative nepetin (16) resulted in an IC50 value of 79 µM.
As proof of our hypothesis we included three further compounds, namely acacetin, scutellarein, and herbacetin (Table 2):
Acacetin (19), a 3′-OH methylated derivative of the highly active flavone apigenin (11 IC50 34.1 µM), resulted in almost equivalent activity (IC50 36.9 µM), underlining the impact of the 2,3-double bond and the free positions 6 and 8 on the effects of flavones in the CCID assay (Figure 1).
The importance of free positions 6 and 8 was additionally shown by the inclusion of scutellarein (20; 6-OH-apigenin) and herbacetin (21; 8-OH-kaempferol). As expected from the IC50 values of baicalein (>100 µM) and norwogonin (not active) as compared to chrysin (24.74 µM), in comparison to 11 (IC50 34.1 µM) no activity was observed for 20 and in contrast to 12 (IC50 44.7 µM) 21 remained without effect as well.
The comparison of logP values did not allow an estimation of the anti-intravasative potential of the investigated flavonoids (Supplemental Figure S3). Regarding the effects of the three most active compounds luteolin (IC50 19.3 µM; logP 2.26), chrysin (IC50 24.8 µM; logP 2.84), and apigenin (IC50 34.1 µM; logP 2.53) in the CCID assay, no correlation between the IC50 and the logP values was seen. The only deducible trend was the lack of activity for compounds with logP values below 2.10. Compounds with similar logP values such as galangin (logP 2.61) and pinocembrin (logP 2.69) showed significant differences resulting in very good (IC50 39.6 µM) and no activity, respectively. The activity of the most potent flavonoid luteolin was in a comparable range with the positive control Bay11-7082.
In summary based on the results of 21 flavonoids, flavones showed better effects in our experimental set-up in the CCID assay than the corresponding flavonols, whereas flavanones remained without effects. An additional hydroxy group at C-6 or C-8 or an additional methoxy group at C-8 in ring A of the flavonoid scaffold resulted in a significant loss of activity. Further substitution of C-6 with a methoxy group decreased the activity to a lesser extent. In contrast, the impact of the hydroxylation/methoxylation pattern in ring B at C-4′ or C-3′ and C-4′ was much less and did not follow a deducible order (luteolin (3′,4′ OH) > chrysin (no OH) > apigenin (4′ OH) > acacetin (4′ OCH3)).

The comparison of 21 flavonoids for their potential to stabilize LEC barriers that were disintegrated by MCF-7 breast cancer spheroids clearly showed the highest activity for flavones with a moderate grade of hydroxylation. The vast majority of these compounds were studied in the CCID assay for the first time. Our results confirm studies which have shown the importance of the 2, 3 double bond in ring C of the flavonoid scaffold on different mechanisms in progression of cancer. Under consideration of the bio-availability of flavonoids, a sufficient provision of the most active compounds could be reached via special delivery systems.

The following are available online at https://www.mdpi.com/2218-0532/87/3/23/s1, Figure S1: Lymph-endothelial marker expression in LEC. Figure S2: a Treatment of the MCF-7/LEC model with flavonoids; b Treatment of the MCF-7/LEC model with Bay11-7802. Figure S3: Correlation of logP values (o/w) and pIC50 values of 13 flavonoids which showed activity in the CCID assay.

CHN was supported by a technology grant (TSA Doktorat) financed by the Austrian Federal Ministry of Science and Research (BMFW) in frame of Asea Uninet. 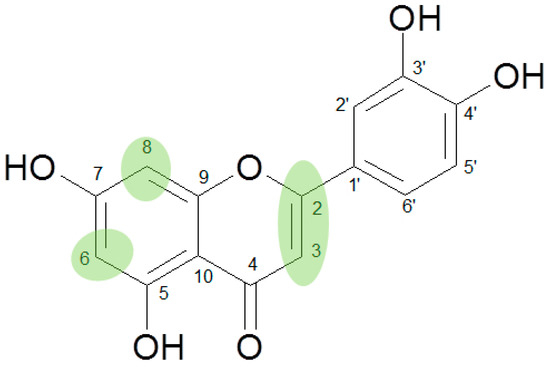 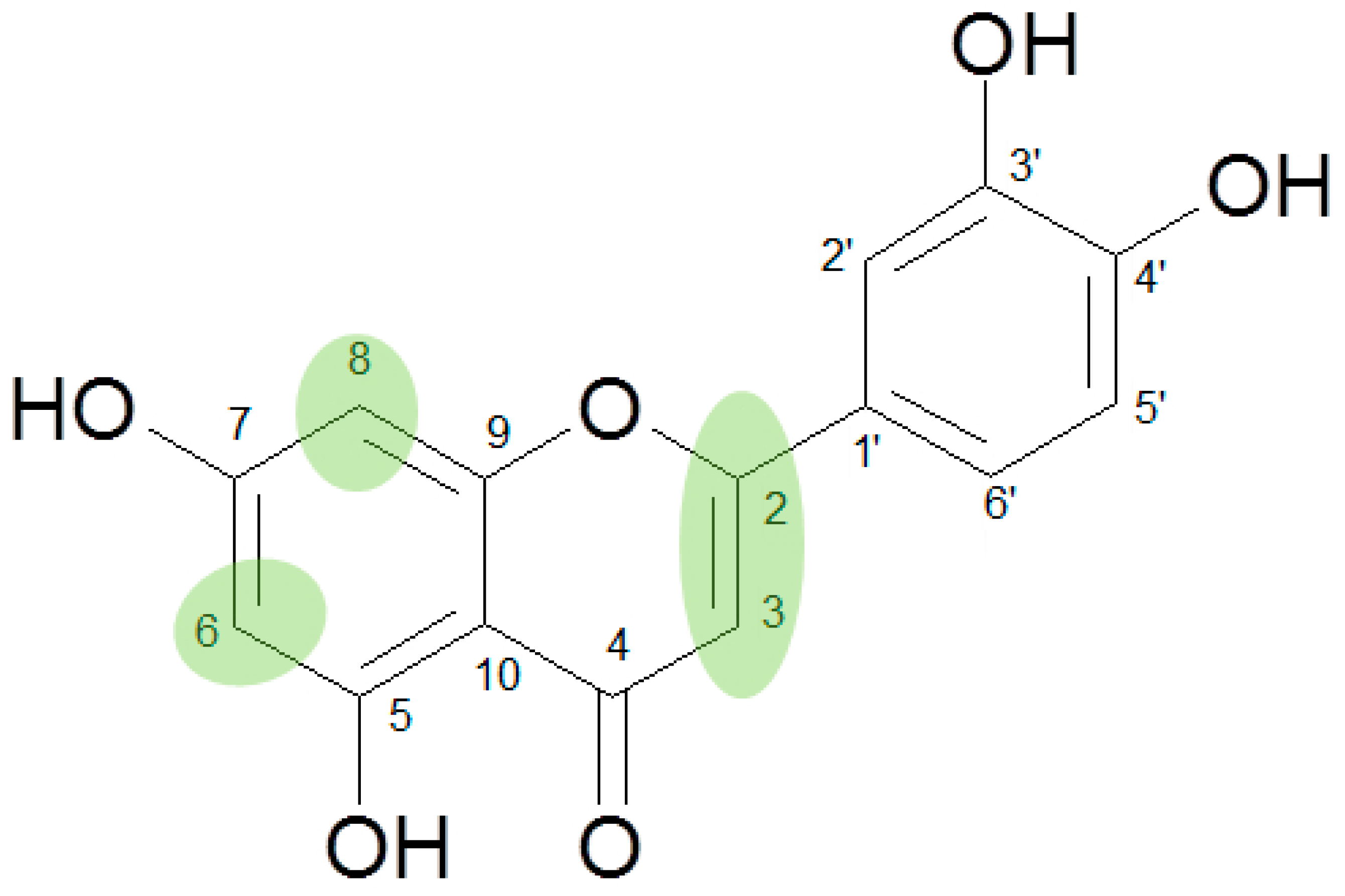