Eudragit® L100 is a commonly used polymer in a coating layer of modified-release drug formulation to prevent drug release in the stomach. The amount of Eudragit® L100 in the formula determines the dissolution profile of drug at its release medium. Hence, its quantification in reference product will facilitate the formulation of a bioequivalent drug product. Some analytical methods including size-exclusion chromatography (SEC) have been reported for characterization of Eudragit® L100 either as single component or its conjugate with the enzyme, but none for its quantification in drug formulation. In this work, an SEC method with charged-aerosol detection (CAD) was developed for determination of Eudragit® L100 in an enteric-coated tablet formulation using Waters Ultrahydrogel 1000 and Waters Ultrahydrogel 120 columns in series. The mobile phase was a mixture of 90:10 (v/v) 44.75 mM aqueous ammonium acetate buffer, pH 6.6 and acetonitrile pumped at a constant flow rate of 0.8 mL/min in isocratic mode. The method was validated for specificity, working range, limit of detection (LOD), limit of quantification (LOQ), accuracy and precision. The method was shown to be specific for Eudragit® L100 against the diluent (mobile phase) and placebo of a coating layer for the tablet. A good correlation coefficient (r = 0.9997) of CAD response against Eudragit® L100 concentration from 0.1–1.0 mg/mL was obtained using polynomial regression. LOD and LOQ concentrations were 0.0015 and 0.0040 mg/mL, respectively. The mean recovery of Eudragit® L100 was in the range of 88.0–91.1% at three levels of working concentration: 50%, 100% and 150%. Six replicated preparations of samples showed good precision of the peak area with % relative standard deviation (RSD) 2.7. In conclusion, the method was suitable for quantification of Eudragit® L100 in an enteric-coated tablet formulation. View Full-Text
Keywords: Eudragit® L100; enteric-coated tablet; size-exclusion chromatography; charged-aerosol detection Eudragit® L100; enteric-coated tablet; size-exclusion chromatography; charged-aerosol detection
►▼ Show Figures 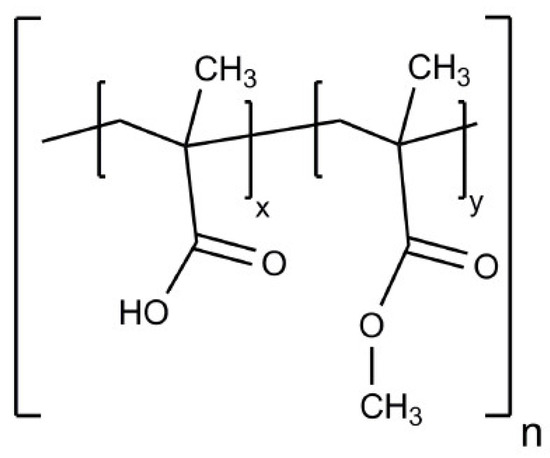