Impact of Obesity on Ceftriaxone Efficacy
Previous Article in Journal

Objective: the aim of this pilot study was to test the short-term effect of oral supplementation with a sodium hyaluronate with a large spectrum of molecular weights (FS-HA®) on the symptoms and functionality of knee osteoarthritis (OA). Methods: 60 subjects affected by clinical and/or radiological diagnosis of symptomatic knee OA were consecutively enrolled in a randomized, double blind, placebo-controlled, clinical trial. At randomization visit, at day 28 (visit 2), and day 56 (visit 3), the Western Ontario McMaster Universities Osteoarthritis Index (WOMAC), the Lequesne Functional Index (LFI) and the Visual Analogue Scale (VAS) for pain (VAS-p) were administered to the enrolled patients. Then, patients were asked how many times they used rescue medications (non-steroidal antinflammatory drugs–NSAIDs and/or anti-pain drugs) during the previous 4 weeks. Finally, the range of knee joint motion (ROM) was also instrumentally measured. Results: In FS-HA® treated subjects, VAS-p, pain and total WOMAC score, LFI and ROM significantly improved compared to the baseline values (p < 0.05). At 60 days, the VAS-p and the pain WOMAC score were significantly lower after FS-HA® treatment when compared with placebo as well (p < 0.05). The FS-HA® treated subjects significantly reduced the weekly use of NSAIDs and/or antipain drugs when compared to the placebo-treated ones (p < 0.05). Conclusion: the oral supplementation with a FS-HA® characterized by a large spectrum of molecular weight was associated with a short-term improvement in symptomatology and functionality of osteoarthritis-affected knees, and associated with a reduction in the use of NSAIDS and anti-pain drugs.
Keywords: hyaluronic acid; osteoarthritis; dietary supplements; symptoms; anti-pain use hyaluronic acid; osteoarthritis; dietary supplements; symptoms; anti-pain use

Osteoarthritis (OA) is the most common joint disease and it is characterized by cartilage erosion, changes in subchondral bone, osteophyte formation and synovial inflammation [1,2]. More specifically, OA of the knee is a major cause of chronic pain and disability among the elderly population [3,4,5]. It is estimated that 250 million people worldwide are affected by knee OA [6]. Among adults 60 years of age or older, the prevalence of symptomatic knee OA is approximately 10% in men and 13% in women, dramatically increasing in older age. However, considering asymptomatic patients, the prevalence could be about one in three in adults [7].
Moreover, knee OA has negative impacts on socioeconomic factors (including impaired work performance and early retirement) [8,9] and on healthcare costs [10]. Data from the US Medicare Expenditure Panel Survey (1996–2005) showed that the medical cost for OA was $185.5 billion [11]. Although there is no treatment proved to prevent or reverse the structural changes that occur in OA, a proper treatment that alleviates symptoms [12] may improve the patient’s self-perceived quality of life [13,14].
In the degradation of articular cartilage, functional limitation and pain, underlies the quantitative and qualitative alteration of hyaluronic acid (HA), the main component of synovial fluid and cartilage, in a pathophysiological process influenced by a wide variety of risk factors, whose impact complicates the disease and radically reduces the quality of life of the patient [15]. In OA patients, HA is depolymerized and eliminated faster than in healthy subjects, due to chronic inflammation [16]. HA concentration is significantly decreased in patients with end-stage knee OA [17].
The therapeutic approaches for symptomatic knee OA included numerous pharmacologic and non-pharmacologic options [14,18]. Given the advanced age of patients with knee OA and their potential comorbidities, an ideal non-surgical treatment should reduce pain and improve functionality without systemic complication risks. Frequently utilized non-operative knee OA treatments include HA that is being administrated either by local injection or by oral administration [19,20].
HA used intra-articularly (IA-HA) in the treatment of OA is known to increase viscosity of the synovial fluid, facilitate gliding via layer formation on the cartilage and protect soft tissue from trauma by acting as a shock absorbent [16]; also soothes the pain and exerts an immunomodulatory effect on inflammatory cells [21]. HA has a delayed onset of action in comparison with intra-articular corticosteroids, but a longer-lasting benefit [22]. The progression of osteoarthritis leads to exposure of subchondral bone at a weight-bearing site at which the bone will then be subjected to abrasion and further damage.
Some studies have shown that oral administration of HA can lead to significant improvements in pain and function [23,24,25]. Recent research about HA bioavailability via oral intake, showed that its absorption seems to slightly occur with lower molecular weight (middleweight, 50–200 KDa). After 10 h from the intake of a single dose of 200 mg/day, a steady increase is observed for the three administered HAs (high weight >2000 KDa; middleweight 1000–1800 KDa; extra-low weight 50–200 KDa) contrary to negative control. Furthermore, intrinsic properties of polysaccharides such as anti-oxidant and anti-inflammatory activity, higher for lower molecular weights, are improved during enzymatic metabolism by the activation into smaller fragments, but are dramatically reduced when the chain length becomes too small [26].
For all these reasons, authors decided to use a different sodium hyaluronate, characterized by a large spectrum of molecular weight to be administered to patients suffering from OA symptoms with a daily dosage of 200 mg in a double-blind, randomized, placebo-controlled clinical trial.
The aim of this pilot study was to test the short-term effect of the oral supplementation with a FS-HA® with a large spectrum of molecular weights on symptoms and functionality of knee OA.

The proposed study is a pilot, randomized, double blind, placebo controlled, two parallel groups, clinical trial. Consecutive patients suffering of knee OA under treatment at the rheumatologic office of the Policlinico S. Orsola-Malpighi were screened for enrolment.
The study fully complied with the ethical guidelines of the Declaration of Helsinki and its protocol was approved by the Ethical Committee of the University of Bologna on March 13th, 2019 (Bologna, Italy; Code: OA_FS-HA2019). All participants signed a written informed consent to participate. The trial was carried out in line with the CONSORT statement.
Four visits have been scheduled, starting from preliminary screening, followed after 7–14 days by an enrollment visit, when patients were randomized to indistinguishable placebo or active treatment (FS-HA®, sodium hyaluronate, characterized by a large spectrum of molecular weight, ExceptionHYAL® Jump, kindly furnished by Roelmi HPC, Origgio, Varese, Italy), 200 mg/day. Then the enrolled patients were visited after 4 (T28) and 8 (T56) weeks.

2.2. Criteria for Eligibility of Patients

The patient inclusion criteria were as follows: (1) aged between 30 and 85 years old; (2) body mass index (BMI) <35 kg/m2; (3) diagnosis of knee OA according to American College of Rheumatology criteria; (4) Kellgren–Lawrence radiological classification scale ≥2; (5) signed informed consent.
The exclusion criteria were the following: (1) infiltration or dietary supplementation with HA in the previous 6 months; (2) ongoing infiltration (with any drug) or surgery treatment on the affected knee; (3) previously experienced resistance to anti-inflammatory (both non-steroid and corticosteroid anti-inflammatory drugs) or/and anti-pain (paracetamol, codeine, tramadol) treatments, as an indirect marker of more severe disease; (4) known allergy/hypersensitivity to hyaluronic acid; (5) glucocorticoids in any usage form, 1 month before and during the investigation period; (6) each medical or surgical condition reducing the ability of the patient to comply with the study protocol.

The randomization was performed at a ratio of 1:1 and the blocks were stratified by sex and age. An alphabetical code was assigned to each lot code (corresponding to treatment or placebo) impressed on the dose box. The study staff and the investigators, as well as all of the volunteers, were blinded to the group assignment. Codes were kept in a sealed envelope, which was not opened until the end of the trial. Dose boxes were mixed and a blinded dose box was assigned to each enrolled patient.
Treatment compliance was assessed by counting the number of pills returned at the time of specified clinic visits. At baseline, we weighed participants and gave them a bottle containing a supply of the study treatment for 60 days. Throughout the study, we instructed patients to take their first dose of new treatment product on the day after they were given it. All unused pills were retrieved for inventory. All treatment products were provided free of charge.
During all the follow up period, patients did not change the type of non-steroidal antinflammatory drugs (NSAIDs) and/or anti-pain drugs that they used until inclusion in the trial.

Patients’ personal history, outcomes and physical examination were evaluated at baseline and at fourth and eighth and week post randomization visit (T28 and T56 respectively) by a clinical independent assessor blinded to treatment. The Western Ontario McMaster Universities Osteoarthritis Index (WOMAC), the Lequesne Functional Index (LFI) and the Visual Analogue Scale for pain (VAS-p) were administered to the enrolled patients. Clinical evaluation provided physical examination of the affected knee and a goniometer-based evaluation of the articular range of motion (ROM). Then, the patients were asked how many times they had used rescue medication (NSAIDs and/or anti-pain drugs) during the previous 4 weeks. Adherence, tolerability and acceptability of the tested treatments were also assessed at T28 and T56.

Data were analyzed using intention to treat by means of the Statistical Package for Social Science (SPSS) version 21.0 (IBM Corporation, Armonk, NY, USA) for Windows. The normality distribution of the tested parameters was evaluated by the Kolmogorov–Smirnov test. The baseline characteristics of the population were described by the independent t-test and the χ2 test, followed by Fisher’s exact test for the categorical variables. Every continuous parameter was compared by repeated-measures analysis of variance (ANOVA). The intervention effects were adjusted for all of the considered potential confounders by the analysis of covariance (ANCOVA). ANOVA was performed in order to assess the significance within and between groups. The statistical significance of the independent effects of treatments on the other variables was determined by the use of the ANCOVA. A one-sample t-test was used to compare the values obtained before and after the treatment administration; 2-sample t-tests were used for between-group comparisons. Tukey’s correction was carried out for multiple comparisons.
All data were expressed as mean ± standard deviation (SD). Every test was two-tailed. p-values < 0.05 were always regarded as statistically significant.

Sixty subjects were consecutively enrolled. The enrolled subjects age (FS-HA® group: 56 ± 8 vs. placebo group: 57 ± 7 years), gender (FS-HA® group: M:F = 11:14 vs. placebo group: M:F = 12:13), and BMI (FS-HA® group: 26.1 ± 1.2 vs. placebo group: 25.9 ± 1.8 kg/m2) were matched between the two groups. All the enrolled subjects completed the trials without any clinically detectable adverse events registered in both groups of treatment. The compliance to the treatment was >90% in both groups of treatments.
Placebo-treated subjects did not experience any significant subjective nor objective improvement in their condition during the trial (p > 0.05). In FS-HA® treated subjects, VAS-p, pain and total WOMAC score, LFI and ROM significantly improved compared to the baseline values (p always < 0.05). At 60 days, the VAS-p and the pain WOMAC score were significantly lower after FS-HA® treatment when compared with placebo as well (p < 0.05) (Table 1).
As regards the weekly pattern use of anti-pain and/or NSAIDs, it was significantly modified by the treatment with FS-HA® (p < 0.05). In particular, the FS-HA® treated subjects significantly reduced the weekly use of anti-pain and/or NSAIDs when compared to the placebo treated ones (p < 0.05) (Figure 1). The mean acceptability score was 9.3/10 in the FS-HA® treated group and 8.9/10 in the placebo treated one, without significant difference between groups (p > 0.05).

In this pilot study, oral supplementation with a FS-HA® characterized by a large spectrum of molecular weights was associated with a short-term improvement in the symptomatology and functionality of osteoarthritis-affected knees, and associated with a reduction in the use of NSAIDS and anti-pain drugs. Further larger and long-term studies should be carried out to confirm these preliminary data.

A.F.G.C. and C.B. (Claudio Borghi) planned and supervised the study, A.F.G.C. and C.B. (Crescenzio Bentivenga) enrolled and followed-up the patients, N.G. independently supervised the study and coworked on writing the paper, E.G. organized visited and managed data, F.F. statistically analysed the data. All authors have read and agreed to the published version of the manuscript. 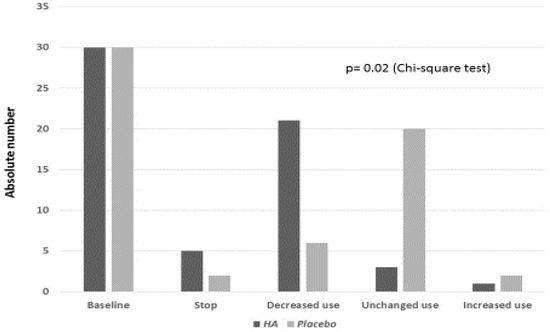