Sporadic, non-hereditary colorectal cancer (CRC) is a complex and multifactorial disease involving genetic, environmental, and lifestyle risk factors. CRC survival is largely dependent on prevention and early detection [1,2]. Currently, routine CRC screening and removal of adenomas (pre-cancerous lesions) are the primary means for prevention; however, the fact that 61% of CRC patients are diagnosed at more advanced, less treatable stages emphasizes the need for risk-stratified CRC prevention strategies that incorporate the individual’s modifiable and non-modifiable risk factors [2].
One of the most currently studied environmental risk factors associated with CRC is the gut microbiota [3,4]. Compared to healthy subjects, individuals with CRC have been reported to have a distinct gut microbiota composition enriched in gram-negative bacteria [5,6], which may include opportunistic pathogens such as Escherichia and Campylobacter that may harbor toxins that induce DNA damage, genomic instability, inflammation, and aberrant cell signaling and other hallmarks of cancer [7,8,9,10,11]. Accumulating evidence supports the notion that a subset of the gut microbiota can promote CRC development through chronic inflammation and genotoxicity, among other possible pathways [12,13,14,15,16,17,18,19,20]. However, the precise mechanisms by which the gut microbiota exerts its CRC-promoting effects are still not fully understood.
Although numerous studies suggest the involvement of individual gut bacterial species in the etiology of CRC, causality is yet to be established [3,10,14,21,22]. Recent studies have reported that genotoxin-producing E. coli strains are more prevalent in CRC [8,23,24] and that CRC tissues have more mucosa-associated E. coli than seemingly healthy tissues [25]. These findings support the idea that bacteria with genotoxic and/or pro-inflammatory toxins are not only more abundant in CRC, but that they are also in close proximity to the colonic epithelium where they can exert their pro-carcinogenic effects.
In this study, we have assembled a panel of genes that includes six specific, genotoxic and/or pro-inflammatory gut bacterial genes that encode toxins with known pathogenic mechanisms, that may contribute to colorectal carcinogenesis (Table 1). Previously, our group reported a method for the detection of six gut bacterial toxin genes in DNA isolated from clinical stool samples [26]. In the present study, we report the association between the presence of these six gut bacterial toxin genes in stool and colorectal neoplasia using samples from two different geographical locations (mainland US and PR).

Human stool samples were obtained from the Early Detection Research Network (EDRN; https://edrn.nci.nih.gov/) and the Puerto Rico Familial Colorectal Cancer Registry (PURIFICAR; http://purificar.rcm.upr.edu/ index_eng.html). The EDRN, an initiative of the National Cancer Institute (NCI), brings together dozens of institutions to help accrue biospecimens, accelerate the translation of biomarker information into clinical applications, and to evaluate new diagnostic tests for cancer. PURIFICAR is an island-wide registry that recruits healthy individuals and those with colorectal neoplasia. All subjects recruited by PURIFICAR complete the Colon Cancer Family Registry risk factor questionnaire, which collects sociodemographic and clinical information including: medical history, body mass index (BMI), lifestyle, family history of cancer, and demographic information, among others. PURIFICAR was approved by the University of Puerto Rico Institutional Review Board (approval number: A2210207).
The EDRN kindly provided 30 age- and gender-matched stool samples from individuals residing in the mainland US (controls = 10; adenoma = 10; and CRC = 10). Samples from individuals living in PR were obtained through PURIFICAR (n = 33; controls = 13; adenoma = 8; and CRC = 12), an island-wide population-based registry that collects biospecimens (blood, colorectal tissue, and stool) from both cases (individuals with colorectal neoplasia) and controls (healthy individuals without prior history of colorectal neoplasia). Only individuals with pathologic confirmation of adenomas and CRC were included in this study. Individuals diagnosed with Crohn’s disease or ulcerative colitis, that have undergone previous subtotal or total colectomies, or have had antibiotic treatment at any time in the three months previous to recruitment were excluded. All stool samples obtained through PURIFICAR were collected during a six-month period and stored at −80 °C.

Bacterial DNA was extracted from human stool samples (200 mg/per sample) using the QIAamp® DNA Stool Mini Kit (QIAGEN) according the manufacturer’s instructions. DNA extractions were performed within a one-month period since stool samples were received at the laboratory. A total of 5 μL of DNA extract was used as template for subsequent PCR analyses. DNA concentrations were determined using a Nanodrop (ThermoFisher Scientific) and total bacterial DNA was quantified using the formula: μg of DNA = A260 × 0.05 × Vol, where A260 is the absorbance at 260 nm and Vol is the total volume of eluted DNA in microliters.

Logistic regression models were used to estimate the magnitude of association (Odds ratio with 95% confidence interval, OR with 95% CI) between colorectal neoplasia (CRC and polyps) and bacterial genes. In addition, multinomial (polytomous) logistic regression models were fitted to estimate the OR’s with 95% CI for CRC (outcome 1) and adenomas (outcome 2) compared with controls. The multinomial logistic regression was used to predict the probabilities of the different possible outcomes (CRC or adenomas) of a categorically distributed dependent variable given a set of independent variables (bacterial genes). All data was analyzed using Stata for Windows release 14.0 (Stata Corporation, College Station, TX, USA).

3.1. Detection of Genotoxic or Pro-Inflammatory Bacterial Genes by PCR

The gut microbiota has emerged as a major contributor to gastrointestinal carcinogenesis [35,36,37]. Despite new insights about the relationships between the gut microbiota and CRC, no methods have been developed that use microbial species or genes as markers for the purposes of screening or risk stratification [38]. In this case-control study, we have examined the association between the presence in stool of a subset of known pro-inflammatory and/or genotoxic bacterial genes and colorectal neoplasia, in samples from two geographically and ethnically distinct populations. This study, even with the limited number of stool samples, revealed a gut bacterial toxin gene profile that was different for each of the two populations (US and PR). Our analyses also revealed that individuals who are positive for multiple bacterial toxin genes have higher odds of developing colorectal neoplasia. Due to the small sample size, most of our observations are not statistically significant, but they reveal a trend that underscores the possibility of incorporating bacterial biomarkers into CRC screening protocols or as tools for risk stratification [38].
In this work, rather than report the detection and prevalence of pro-carcinogenic bacterial species, such as F. nucleatum and B. fragilis, we screened stool samples for the presence of six specific gut bacterial genes that encode toxins that have been previously shown to promote DNA damage and inflammation [26,28,29,30,32]. Two distinct bacterial toxin gene signatures were observed in stool samples from individuals living in the mainland US and PR. The sample size in these two cohorts (n = 30 in US and n = 33 in PR) is too small to draw any conclusions regarding how the geographical differences between these groups may influence the gut microbiome. However, dietary patterns are known to shape and influence the gut microbiota, their metabolism, and functional characteristics [39,40,41]. Studies have shown that the dietary patterns of Puerto Rican adults differ from those in the general US population [42]. In addition, host genetics have been reported to modulate the gut microbial composition [43,44,45] and Puerto Rican Hispanics have been shown to have a unique genomic composition [46], which could possibly contribute to the differences observed in their stool bacterial toxin gene profiles compared to the profiles from individuals from the mainland US. Nonetheless, additional studies with a larger number of samples are needed in order to examine the factors that contribute to the observed differences in the gut microbiota in these two populations.
In the samples from the mainland USA, the gene AMmurB was found to be associated with CRC. Although not encoding a bacterial toxin itself, this gene is a marker for the presence of Akkermansia muciniphila, a mucolytic bacterium whose link to CRC had been previously established [33,47]. It has been thought that the presence of this bacterium in CRC is due to the increased production of the glycoprotein mucin in diseased tissue [33]. This is not surprising since colorectal adenomas have been reported to contain increased levels of certain mucins [48]. Although not reaching statistical significance, the presence of pks island was associated with higher odds (OR = 2.7) of having adenomas or CRC. The pks island encodes a number of enzymes for the production of a genotoxic natural product colibactin, whose chemical structure and mechanism of action have not been elucidated, but its presence had been previously shown to correlate with CRC and tumor formation [8]. We also report the increased presence of tcpC and usp in CRC samples (OR > 2.7). The possible role of TcpC in cancer could be related with its known activity as an antagonist of Toll-like receptor 4, an activity that promotes aberrant tissue inflammation [29]. Finally the presence of usp in the GI tract had been documented, but its main previously known activity was the promotion of cell cycle arrest and DNA damage in the urinary tract [32]. Although there are a number of plausible mechanisms by which these bacterial genes could favor cancer promotion, we believe that the true clinical significance of these preliminary associations will emerge from validation studies with larger cohorts that more fully reflect the geographical and racial diversity of the US.
In the Puerto Rico samples, stronger associations were observed between the presence of the bacterial toxin genes in our panel and increased odds of having adenomas or CRC. As in the US samples, marginally significant associations were detected between the presence of pks, tcpC, or usp, and colorectal neoplasia. Having 2 or more of any bacterial toxin gene in our panel in stool showed a strong significant association with higher odds of having adenomas. The detection of such a strong significant association within this small sample group warrants further investigation in larger number of individuals and supports that this panel may have potential as a CRC risk stratification tool.
Taken together, our results provide a glimpse into the possible feasibility and clinical utility of a CRC risk stratification and/or screening strategies based on the detection of specific bacterial toxin genes in stool. Although our results need to be further validated in a larger number of patient samples and with more diverse patient populations, it is clear that distinct bacterial toxin gene signatures can be detected and quantified, without having to isolate bacterial clones or to reconstruct species composition. Further research is warranted to evaluate the clinical utility of this PCR-based method in CRC risk stratification and/or screening, and to further explore the mechanisms by which these genes could act as functional effectors in colorectal carcinogenesis.

R.G.-M., M.G.-P., M.C.-C., and A.B.-O. designed the study. M.G.-P., M.C.-C., and A.B.-O. obtained the funding necessary for the study. R.G.-M. and M.G.-P. performed the experiments, and together with M.C.-C. and A.B.-O., MSS performed data analyses and interpretation of the data. All authors contributed in the preparation of tables and figures, and in drafting the manuscript. Some of this work will be published as part of the doctoral thesis of R.G.-M.

The authors thank Luis Ríos-Hernández from UPR Mayagüez for the E. faecalis strains. The authors acknowledge the support of Dean Brenner and Ananda Sen from the University of Michigan and from the Early Detection Research Network (EDRN) and its Great Lakes/New England Clinical Validation Center for providing stool samples from individuals in the mainland US.

Informed consent was obtained for each of the human participants and the confidential nature of their participation is protected per IRB protocol A2210207. 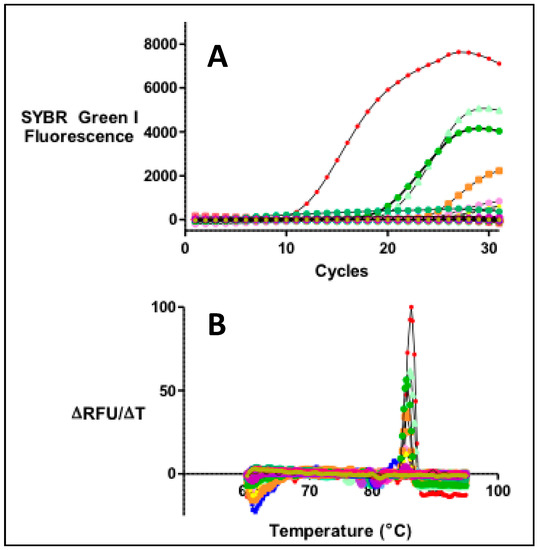 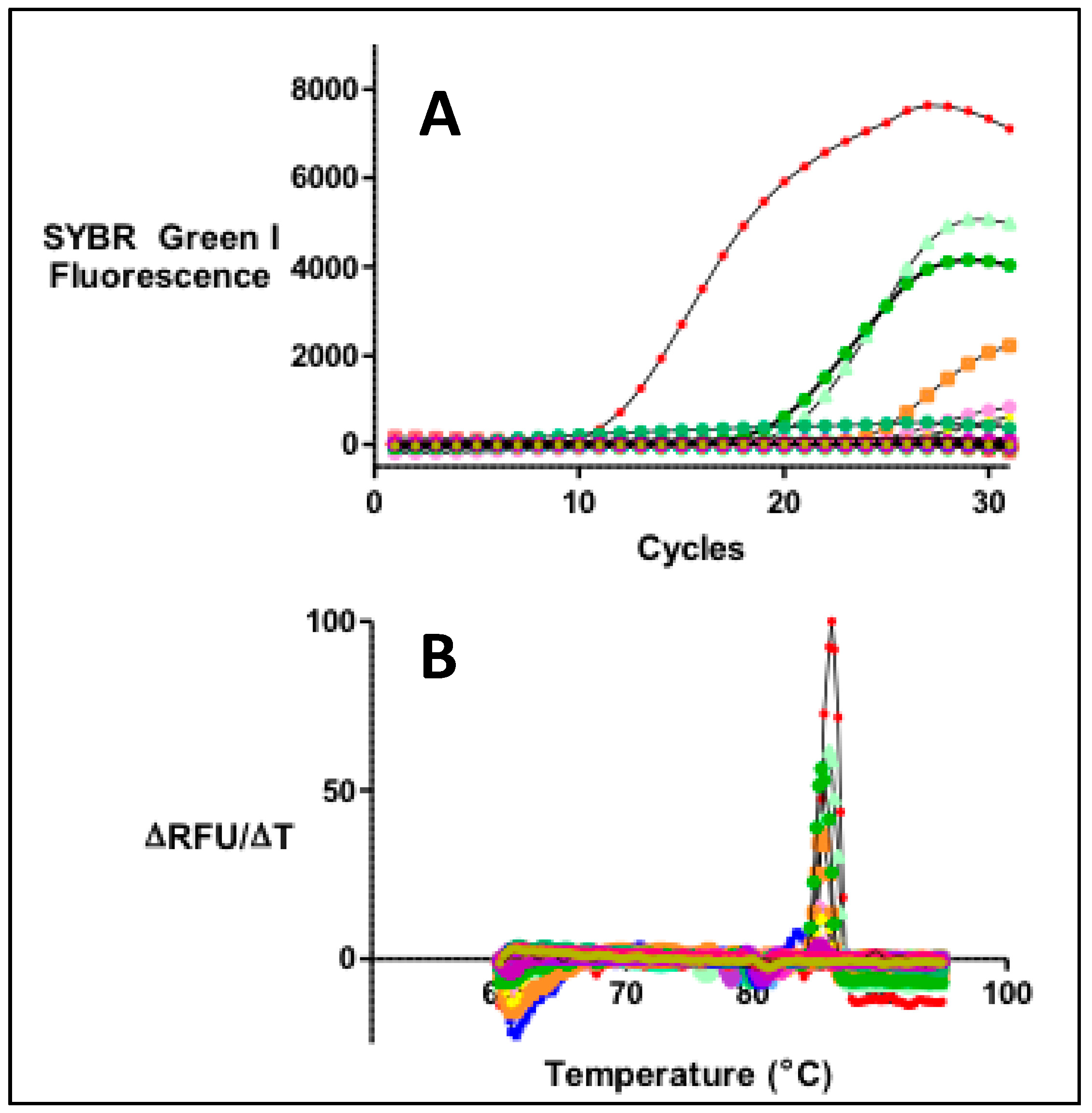 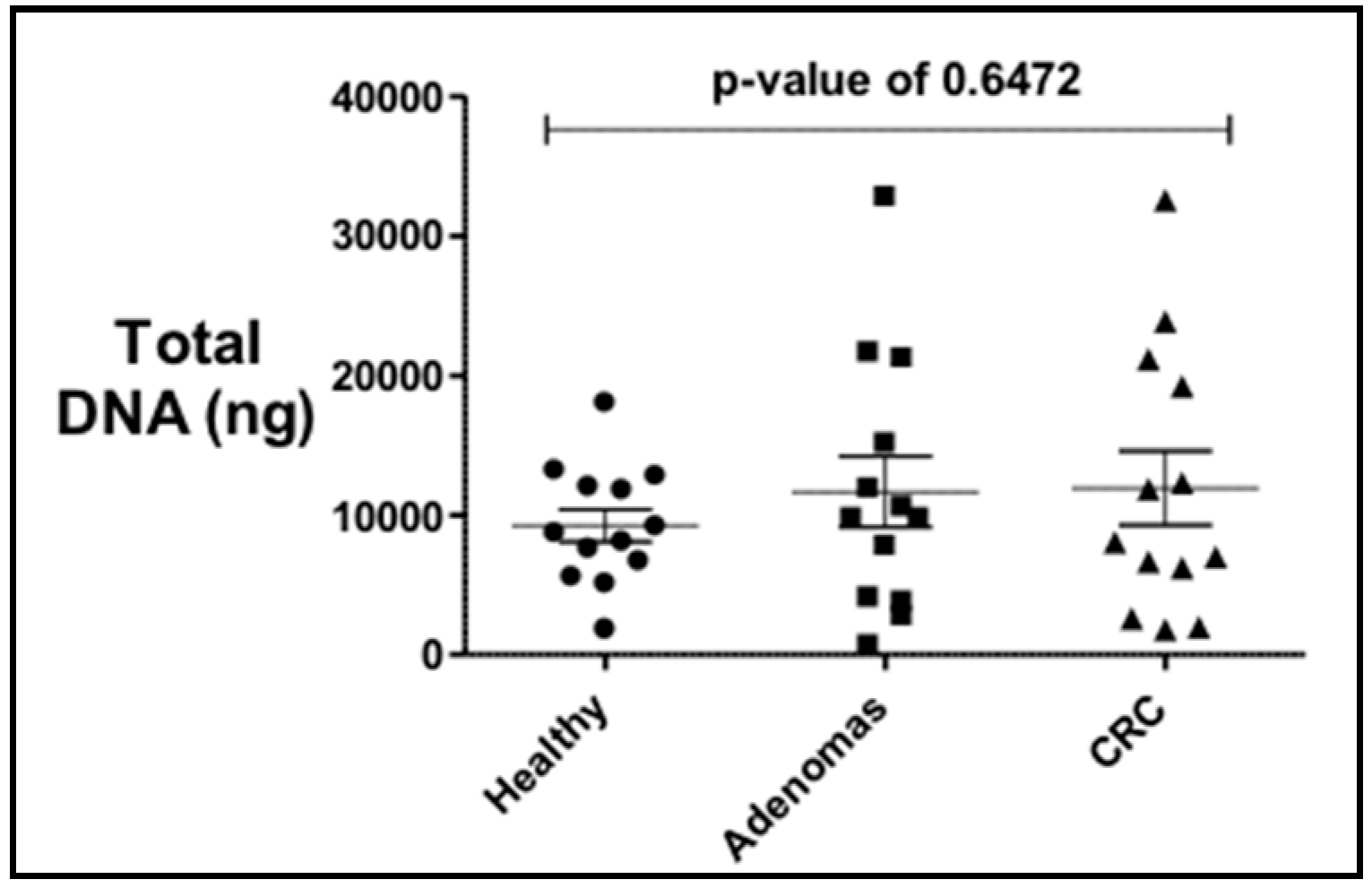 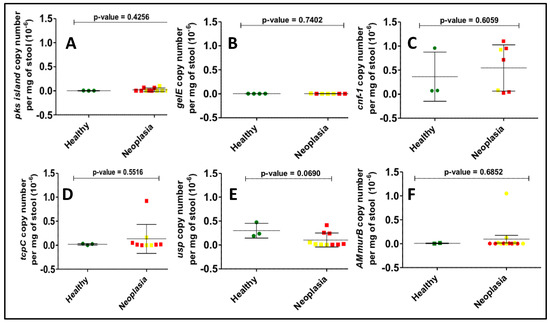 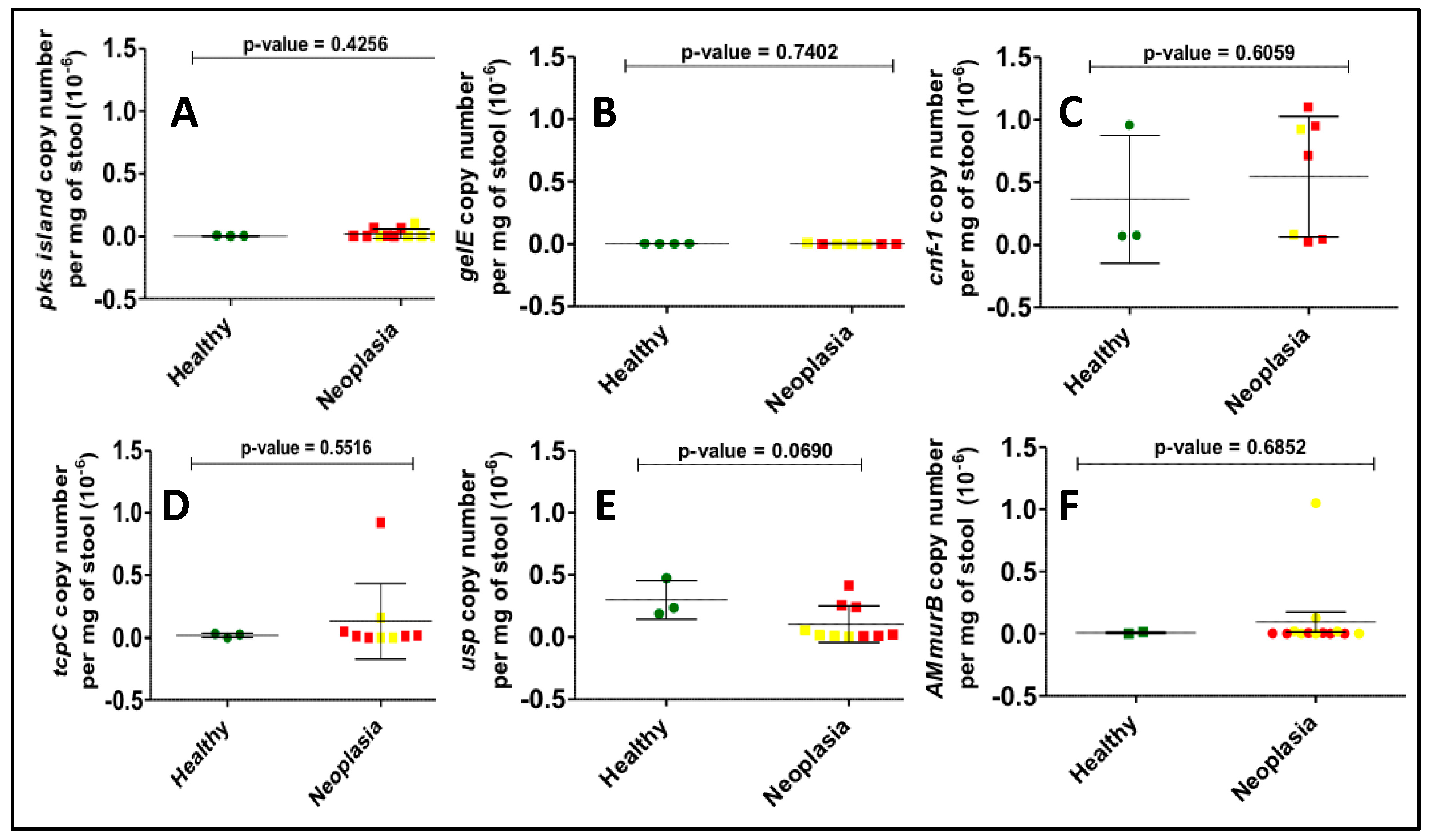