In Phase I, we collected data on five subjects yielding over 90% positive performance in Magnetoencephalographic (MEG) mid-and post-movement activity. In addition, a driver was developed that substituted the actions of the Brain Computer Interface (BCI) as mouse button presses for real-time use in visual simulations. The process was interfaced to a flight visualization demonstration utilizing left or right brainwave thought movement, the user experiences, the aircraft turning in the chosen direction, or on iOS Mobile Warfighter Videogame application. The BCI’s data analytics of a subject’s MEG brain waves and flight visualization performance videogame analytics were stored and analyzed using the Hadoop Ecosystem as a quick retrieval data warehouse. In Phase II portion of the project involves the Emotiv Encephalographic (EEG) Wireless Brain–Computer interfaces (BCIs) allow for people to establish a novel communication channel between the human brain and a machine, in this case, an iOS Mobile Application(s). The EEG BCI utilizes advanced and novel machine learning algorithms, as well as the Spark Directed Acyclic Graph (DAG), Cassandra NoSQL database environment, and also the competitor NoSQL MongoDB database for housing BCI analytics of subject’s response and users’ intent illustrated for both MEG/EEG brainwave signal acquisition. The wireless EEG signals that were acquired from the OpenVibe and the Emotiv EPOC headset can be connected via Bluetooth to an iPhone utilizing a thin Client architecture. The use of NoSQL databases were chosen because of its schema-less architecture and Map Reduce computational paradigm algorithm for housing a user’s brain signals from each referencing sensor. Thus, in the near future, if multiple users are playing on an online network connection and an MEG/EEG sensor fails, or if the connection is lost from the smartphone and the webserver due to low battery power or failed data transmission, it will not nullify the NoSQL document-oriented (MongoDB) or column-oriented Cassandra databases. Additionally, NoSQL databases have fast querying and indexing methodologies, which are perfect for online game analytics and technology. In Phase II, we collected data on five MEG subjects, yielding over 90% positive performance on iOS Mobile Applications with Objective-C and C++, however on EEG signals utilized on three subjects with the Emotiv wireless headsets and (n < 10) subjects from the OpenVibe EEG database the Variational Bayesian Factor Analysis Algorithm (VBFA) yielded below 60% performance and we are currently pursuing extending the VBFA algorithm to work in the time-frequency domain referred to as VBFA-TF to enhance EEG performance in the near future. The novel usage of NoSQL databases, Cassandra and MongoDB, were the primary main enhancements of the BCI Phase II MEG/EEG brain signal data acquisition, queries, and rapid analytics, with MapReduce and Spark DAG demonstrating future implications for next generation biometric MEG/EEG NoSQL databases. View Full-Text
Keywords: brain-computer interface; machine learning algorithms; encephalographic (EEG); magnetoencephalographic (MEG); Hadoop Ecosystem; iOS Mobile Applications; MongoDB; Cassandra; Emotiv EPOC headset; OpenVibe brain-computer interface; machine learning algorithms; encephalographic (EEG); magnetoencephalographic (MEG); Hadoop Ecosystem; iOS Mobile Applications; MongoDB; Cassandra; Emotiv EPOC headset; OpenVibe
►▼ Show Figures 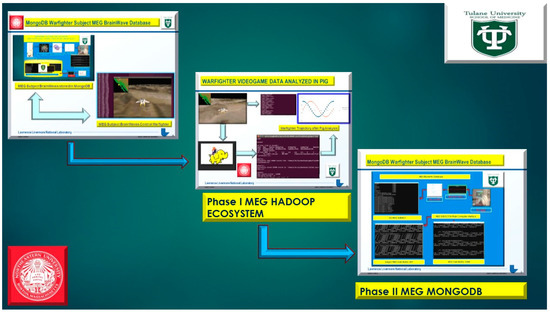