Psoriasis and Microbiota: A Systematic Review
Previous Article in Journal

CVD Risk Stratification in the PCSK9 Era: Is There a Role for LDL Subfractions?

Post-surgical aspergillosis is an uncommon complication that carries a high mortality rate in affected patients. The diagnosis is challenging given the lack of highly sensitive methods to isolate Aspergillus from surgical sites. Here, we present a case of post-surgical aspergillosis that occurred after the resection of acoustic neuroma in an immunocompetent patient. Imaging revealed leptomeningeal enhancement and a cerebellar extra-axial fluid collection adjacent to the right retrosigmoid craniotomy. The patient was taken to the operating room for debridement, where purulent fluid was obtained from subdural space. The diagnosis was achieved by histopathology and polymerase chain reaction (PCR) in brain tissue. Appropriate investigations failed to detect contamination in the operating room. The patient was successfully treated with 3 months of voriconazole. We highlight the importance of recognizing this uncommon complication and advocate for the use of molecular techniques to improve the diagnostic yield in central nervous system aspergillosis.
Keywords: post-surgical; central nervous system; Aspergillus; PCR; voriconazole post-surgical; central nervous system; Aspergillus; PCR; voriconazole

Aspergillosis is an infection caused by fungi of the genus Aspergillus. The most common human pathogen of this species is Aspergillus fumigatus, but A. flavus and A. niger are also frequently reported. Aspergillus is a ubiquitous fungus, and its normal ecological niche is the soil, water, and decaying vegetation. It has been recognized as a major cause of disease in immunocompromised individuals, especially in the setting of intensive chemotherapy, hematopoietic stem cell transplantation, or solid organ transplantation. Post-operative aspergillosis is a rare complication after surgical procedures and occurs mainly in immunocompetent patients whose predisposing condition is a breach of the skin or mucosal barriers. It has been described after many surgical interventions, and dental and ophthalmologic surgery are the most common procedures to be associated with this complication [1]. We report a case of post-surgical subdural empyema in a patient who had recent craniotomy for acoustic neuroma resection, and who was treated successfully with medical and surgical therapy. In this report, we highlight the importance of recognizing this uncommon pathology in patients with recent surgical interventions, and discuss the challenges we face for the diagnosis and treatment of postsurgical aspergillosis.

A 71 year-old woman with a history of hypertension, hypothyroidism, and acoustic neuroma was admitted for right retrosigmoid craniotomy and tumor resection. Her operation was uneventful, with no immediate post-surgical complications. She was discharged on dexamethasone 6 mg daily for 3 days, with tapering doses of steroids over the course of 1 week. Three weeks later, she presented to the hospital with persistent fever and chills, and had experienced occasional headaches for five days. On admission, her vitals were significant with a temperature of 38.5 °C, heart rate of 83 beats per minute, respiratory rate of 14 breaths per minute, and blood pressure of 158/83 mmHg. On examination, she was alert and oriented to person, place, and time. Her right posterior auricular incision site looked clean, with mild erythema but no discharge. Sutures were intact. Neurologic exam did not reveal any focal or meningeal signs. Laboratory studies were significant with a white blood cell count of 8.9 k/μL, hemoglobin of 10.9 g/dL, and a platelet count of 313 k/μL. Urinalysis showed 33 white blood cells, positive leukocyte esterase, and negative nitrates. Urine culture grew more than 100,000 colonies of Klebsiella pneumoniae. She was started on cefepime 2 g intravenously every 12 h for presumptive urinary tract infection. Despite antibiotic coverage for 3 days, the patient continued to have fevers up to 38.7 °C. Given her recent surgical intervention, a computed tomography (CT) scan was ordered, which showed a subgaleal collection overlying the craniotomy site and hypodense areas in the right cerebellum that likely represented postoperative changes. A hypodense extra-axial collection was noted along the right cerebellum. Given the concern for postsurgical meningitis, cefepime was switched to meropenem 2 g every 8 h, and vancomycin 1 g every 12 h was added to her antibiotic regimen. The patient showed a rapid clinical deterioration, with the development of nuchal rigidity, altered mental status, and seizures in the next 24 h. She underwent a lumbar puncture, which evidenced an opening pressure of 30 cm H2O. Cerebrospinal fluid (CSF) analysis showed 800 white blood cells/mm3 with 90% neutrophils, low glucose (31 mg/dL), and high protein (115 mg/dL). The smear for acid-fast bacilli in CSF was negative. CSF Cryptococcus antigen was also negative. The FilmArray® meningitis/encephalitis panel did not identify any organisms. Emergent magnetic resonance imaging (MRI) was ordered, which showed diffuse leptomeningeal enhancement and moderately dilated ventricles. Fluid layering within the bilateral occipital horns was noted, as there were concerns of ventriculitis. Additionally, a 1 cm right cerebellar extra-axial collection was seen (Figure 1A,B). The patient was immediately taken to the operating room for the placement of an external ventricular drain. Intrathecal colistin and vancomycin were initiated afterwards. Follow-up CSF analysis 48 h later showed normalization of white blood cell count (2 cells/mm3); however, low glucose and high protein persisted. Lactic acid from CSF was elevated (35 mg/dL). Bacterial and fungal cultures from the blood and CSF did not show any growth. Intraventricular antibiotics were discontinued after 48 h, and the patient continued with meropenem and vancomycin intravenously for 2 weeks. Despite antibiotic therapy, the patient’s mental status did not improve significantly, and the fevers continued intermittently. Further studies that included serum galactomannan and (1→3)-β-d-glucan were negative. A repeat MRI showed persistent leptomeningeal enhancement at the cervicomedullary junction at the skull. Extra-axial collection adjacent to the retrosigmoid craniotomy was again noted. A CT scan of the chest, abdomen, and pelvis was ordered to rule out other potential sources of infection, but imaging was unremarkable. On further questioning, the patient’s daughter stated that her mother was in India and Nepal three months prior to the initial craniotomy, where she was working as a volunteer in a clinic and was exposed to patients with tuberculosis (TB). The patient had a history of a positive purified protein derivative (PPD), but was never treated for latent TB. Given her epidemiologic risk factors, MRI findings and clinical deterioration, the patient was started on isoniazid, rifampin, pyrazinamide, and levofloxacin for the treatment of presumptive tubercular meningitis. However, after one week of treatment, no clinical improvement was noted, and she was taken to the operating room for exploration. The patient underwent midline limited suboccipital craniotomy and C1 laminectomy. Clear pus was noted in the area of the foramen magnum, foramina of Magendie, and posterior to the upper cervical cord, with evidence of pachymeningitis of the pia of the upper cervical cord and both cerebellar tonsils. The subdural empyema was evacuated and samples were sent for cultures. A biopsy of the arachnoid tissue was obtained. Intra-operative frozen section revealed chronic mixed inflammatory, but no granulomas. Two days later, histopathology reported fungal elements. Immunohistochemistry for Aspergillus was strongly positive (Figure 2A,B). Toxoplasma, acid-fast bacilli, and gram stains were negative. Tissue sample was sent to the University of Washington in Seattle, WA for fungal PCR. Anti-tuberculosis treatment was discontinued and the patient was started on liposomal amphotericin 5 mg/kg daily and voriconazole intravenously 6 mg/kg every 12 h as a loading dose, and then 4 mg/kg every 12 h for maintenance. Five days later, tissue real-time PCR came back positive for Aspergillus fumigatus. Amphotericin was discontinued and the patient was kept on voriconazole. The patient’s mental status improved markedly over the following days. The fever subsided as well. Treatment with intravenous voriconazole was eventually transitioned to oral voriconazole 250 mg every 12 h to complete 3 months of therapy. The voriconazole level at 2 weeks of treatment was 2.6 μg/mL, which was within the therapeutic range for central nervous system (CNS) aspergillosis (reference range 2–5 μg/mL). The patient was later transferred to a rehabilitation facility for physical therapy. At the four month follow-up, the patient was fully alert, and her verbal communication was almost back to her baseline. No focal or meningeal signs were noted on examination. A brain MRI was repeated and showed complete resolution of leptomeningeal enhancement, with no collections.

CNS aspergillosis is an uncommon complication following neurosurgical interventions that carries a high mortality rate. The nonspecific manifestations of this condition and its subacute or chronic onset usually leads to delayed identification and treatment. The diagnosis is very challenging and usually relies on histology and cultures. Molecular tests have emerged as promising diagnostic tools in recent years. Although Aspergillus PCR is a molecular technique that is not yet standardized, our case illustrates its usefulness and high sensitivity when applied to tissue specimens. The treatment of this condition involves the combination of surgical and medical measures. The optimal duration of antifungal therapy is unknown, however we have obtained good results with 3 months of voriconazole treatment.

APC was sponsored by MDPI.

The corresponding author states that there is no conflict of interest.

Written informed consent was obtained from the patient for publication of this case report and any supplementary images. 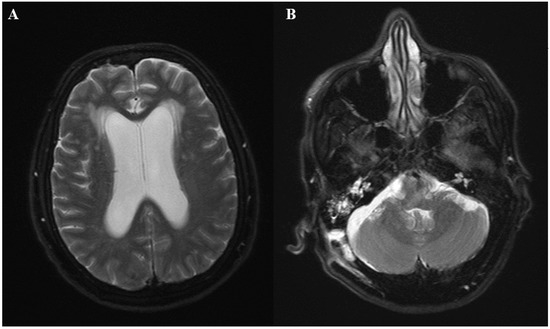 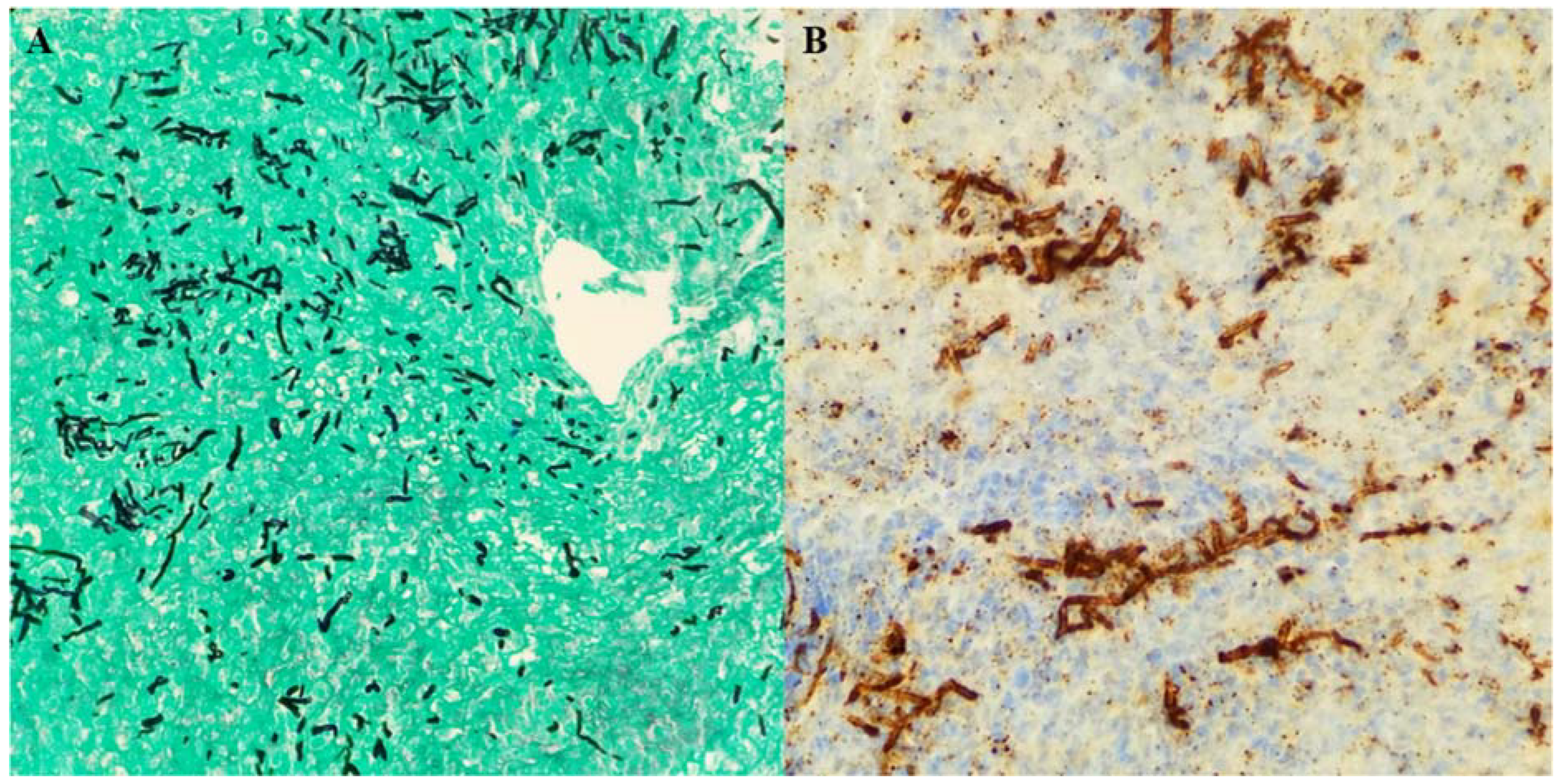