Mucopolysaccharidosis type I (MPS I) is the most common form of the MPS group of genetic diseases. MPS I results from a deficiency in the lysosomal enzyme α-l-iduronidase, leading to accumulation of undegraded heparan and dermatan sulphate glycosaminoglycan (GAG) chains in patient cells. MPS children suffer from multiple organ failure and die in their teens to early twenties. In particular, MPS I children also suffer from profound mental retardation and skeletal disease that restricts growth and movement. Neither brain nor skeletal disease is adequately treated by current therapy approaches. To overcome these barriers to effective therapy we have developed and tested a treatment called substrate deprivation therapy (SDT). MPS I knockout mice were treated with weekly intravenous injections of 1 mg/kg rhodamine B for six months to assess the efficacy of SDT. Mice were assessed using biochemistry, micro-CT and a battery of behaviour tests to determine the outcome of treatment. A reduction in female bodyweight gain was observed with the treatment as well as a decrease in lung GAG. Behavioural studies showed slight improvements in inverted grid and significant improvements in learning ability for female MPS I mice treated with rhodamine B. Skeletal disease also improved with a reduction in bone mineral volume observed. Overall, rhodamine B is safe to administer to MPS I knockout mice where it had an effect on improving aspects of neurological and skeletal disease symptoms and may therefore provide a potential therapy or adjunct therapy for MPS I patients.
Keywords: mucopolysaccharidosis type I; substrate deprivation; rhodamine B; lysosomal storage disorder; glycosaminoglycans mucopolysaccharidosis type I; substrate deprivation; rhodamine B; lysosomal storage disorder; glycosaminoglycans

Mice were obtained from the Jackson laboratory on a C57Bl/6 background and maintained in-house. Genotype was determined in the first week after birth by PCR of genomic DNA as previously described [30] and pups were weaned from the dam at 3 weeks of age. Mice were housed in a 14 h/10 h light/dark cycle with ad libitum access to food and water. Normal, MPS I untreated and MPS I mice treated with Rhodamine B were weighed weekly to record bodyweight measurements as an overall measure of health using normal (n = 9–15 female, n = 10–14 male), MPS I untreated (n = 6–14 female, n = 6–17 male) and MPS I SDT (n = 8 female and n = 8 male) mice. Treatment was carried out with intravenous weekly injections of 1 mg/kg rhodamine from 4 weeks of age, as previously described [23,24]. Mice were sacrificed by carbon dioxide asphyxiation and tissues collected for subsequent analysis. All animal studies were approved by the Children, Youth and Women’s Health Service and The University of Adelaide Animal Ethics Committees. Animal numbers used for each experiment can be found in Supplementary Table S1.

2.5. Extraction and Quantification of Brain Monosialogangliosides

Mouse brains were cut in half longitudinally, along the cerebral fissure. Gangliosides were isolated using a modified Folch method combined with solid phase extraction according to Williams et al [37,38] as previously described [33,39] and quantified by electrospray ionization tandem mass spectrometry. GM1 (d18:1/18:0), GM2 (d18:1/22:1), GM3 (d18:1, 18:0), and d3-GM1 (d18:1, 18:0) were quantified against a d3-GM1 internal standard and normalised to tissue weight as previously described [33,39]. Results are calculated as nmol/g wet tissue weight and expressed as a percentage of untreated normal values.

All statistical analysis was conducted using either one-way or two-way analysis of variance (ANOVA) where appropriate, with a Tukey’s post-hoc test used to measure statistical significance between designated variables (SigmaStat v3.0).

MPS I mice were treated from 4 weeks of age with weekly intravenous injections of 1 mg/kg rhodamine B until 6 months of age. Bodyweights of male and female mice were measured weekly. All MPS I untreated mice gained weight more rapidly than normal control mice, with MPS I untreated females and males being significantly different from 3 months of age (Figure 1A and B respectively, p < 0.001). A decrease in bodyweight gain was observed in MPS I female mice treated with rhodamine B, which was significantly less than MPS I untreated mice at 3, 5 and 6 months of age (Figure 1A). A small delay in bodyweight gain was observed in male MPS I mice treated with rhodamine B, with treated males not becoming statistically different to normal male mice until 4 months of age.

3.2.1. Effect of SDT Treatment on Primary and Secondary Storage

No difference between sexes was observed for tissue GAG or ganglioside content and both sexes were combined for analysis. Urinary GAG was analysed at 6 months of age (Figure 2), with MPS I untreated showing 12.8-fold higher excretion of GAG than age-matched normal mice (p < 0.001). MPS I SDT mice only had an 8-fold increase compared to normal mice, however, this was not statistically significant (p > 0.05) to untreated MPS I mice (Figure 2). Tissue GAG was elevated in all tissues analysed (liver, kidney, spleen, heart, lung and brain) in MPS I untreated mice compared to age-matched normal controls (Figure 3, p < 0.001). Treatment of MPS I mice with rhodamine B did not alter tissue GAG levels in liver, kidney, heart, spleen and brain (Figure 3, p > 0.05). The exception to this was lung GAG, which was significantly decreased in MPS I mice treated with rhodamine B (Figure 3F, p < 0.05), however still remained over 20-fold higher than normal indicating a modest improvement. Secondary storage of brain GM2 and GM3 gangliosides was observed at 6 months with a 3.3- and 3-fold increase in GM2 and GM3 ganglioside respectively, which was significantly elevated in MPS I untreated mice compared to the age-matched normal control (Table 1, p < 0.001). No effect on GM2 and GM3 levels was observed with rhodamine B treatment in MPS I mice. Urinary GAG was elevated in MPS I untreated mice, and was reduced in MPS I SDT mice compared to untreated MPS I mice, but this did not reach significance (p > 0.05).

No difference was observed between the sexes for enzyme activities and data from both sexes were combined for analysis. β-hexosaminidase and α-l-iduronidase levels (data not shown) were determined for liver, kidney, spleen, heart, lung and brain (Table 2). Compared to normal, MPS I mouse tissues showed significant elevations in β-hexosaminidase activity and, as expected, significant decreases in α-l-iduronidase (data not shown). No change in β-hexosaminidase compared to MPS I untreated mice was observed with treatment (p > 0.05).

3.3. Effect of SDT Treatment on Behaviour

No sex difference was observed in the open field and data from both sexes was combined. Rearing activity was significantly reduced in MPS I untreated mice compared to normal mice at 6 months of age (Figure 5, p < 0.05). Treatment with rhodamine B had no effect on rearing (p > 0.05). No significant differences in activity as determined by marginal or centre distance (% total distance) were observed in any group (data not shown).

A difference was observed between male and female performance in the water cross maze learning component undertaken at 4 months of age. While both female and male mice learnt the spatial learning task, untreated female MPS I mice had a significantly reduced ability to locate the platform (41.7% correct trials compared to 88.9% correct trials in normal mice, Figure 6A). Treatment with rhodamine B resulted in a significant increase in correct entries by female mice (75%). In contrast, although the percentage of correct entries was reduced in male untreated MPS I mice (70.8% vs. 90% in normal mice) this reduction was not significant and no improvement was observed after rhodamine B administration (70.8% in treated male mice, Figure 6B).
After the learning phase, mice were re-tested 1 and 2 months later to determine the effect of treatment on memory. Both female (Figure 6A) and male (Figure 6B) untreated MPS I mice showed decreased number of correct entries compared to normal mice 1 month post-learning and all groups of mice were similar 2 months after learning. Treatment did not improve memory with no difference observed between the untreated and the treated MPS I groups for either sex (p > 0.05).

In summary, treatment of MPS I mice with rhodamine B was able to significantly improve learning capacity in the water cross maze in female MPS I treated mice, improve grip strength in the inverted grid and have a positive effect on lumbar bone mineral volume, suggesting that SDT may be a potential therapy to improve neurological and skeletal disease in MPS I. This suggests that SDT should not be overlooked even where there is minimal or no residual enzyme activity present and may be a useful adjunct therapy option for some patients.

The authors would like to thank the staff at the WCHN animal care facility, Lynn Marsden, Lesley Jenkins-White and Natasha Harpas for caring for the mice. This work was supported by grants from the NH&MRC and the WCH Research Foundation. 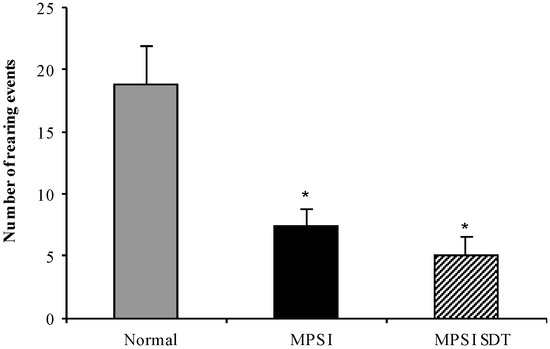 Table 1. Brain ganglioside levels.
Tissue GAG levels are expressed as the average ± SEM for each group. Results are presented as pmol/g tissue. ** indicates p < 0.001, One-way ANOVA, Tukey’s post-hoc test, Normal vs. MPS I untreated or Normal vs. MPS I SDT.