Increased body fat in youth is associated with various health conditions including altered autonomic nervous system (ANS) function and cardiovascular regulation [1], type II diabetes mellitus [2] and high overall risk for cardiovascular disease [3]. A population predisposed to early childhood morbid obesity includes a genetic disorder called Prader-Willi Syndrome (PWS), which has an incidence of 1 in 15,000 live births [4]. In addition to having distinct morphological features such as high fat mass, low lean mass and short stature, people with PWS present with hypotonia, poor muscle strength, low cardiovascular capacity and poor cardiovascular fitness [5,6,7,8]. Additionally, previous studies evaluating ANS dysregulation in PWS are equivocal and it remains unclear whether detriments are a result of parasympathetic [9,10] or sympathetic [1,11] inactivity.
Previous research has shown that overweight and obese young people experience lower resting vagal activity [12] and lower one-minute heart rate recovery (HRR) following maximal endurance exercise [13] compared to lean controls. HRR, an independent predictor of all-cause mortality in children [13] and adults [14], measures the HR decline from the end of exercise to a pre-determined time during recovery. Parasympathetic reactivation immediately occurs following exercise cessation [15] and is eventually replaced by sympathetic withdrawal at about 60 s into recovery [16]. Our previous investigation of 60-s HRR following endurance exercise suggested that HRR delay in children with PWS compared to lean and obese controls was attributed to either ANS dysregulation and/or poor cardiovascular fitness, both present in PWS individuals [1,5].
Endurance exercise is important, but recent works show that regular resistance exercise participation also has the potential to improve body composition and specific motor performance skills, increase spontaneous physical activity, and increase success and enjoyment in organized sport environments in young people with and without PWS [17,18,19]. Previous research has also shown that resistance training improves the HRR response following peak aerobic exercise in adults with [20] and without disability [21]. However, no studies have evaluated HRR immediately following an acute bout of dynamic resistance exercise in children or evaluated parasympathetic reactivation by measuring HRR at 30 s. Therefore, the purpose of this study was to investigate the effect of obesity and PWS on the HRR response at 30 and 60 s following a whole body resistance exercise protocol in children. The researchers hypothesized that resistance exercise HRR would be slower in those with increased adiposity compared to lean controls, with a greater delay observed in individuals with PWS, similar to the findings observed in the previous endurance exercise study [5].

Eleven young people with PWS (ages 8 to 18 years), 16 obese (body fat percentage ≥ 95th percentile for age and sex, obese) and 12 lean (body fat percentage between the 2nd and 85th percentile for age and sex, lean) children without PWS (ages 8 to 11 years) participated in this study from July 2010 to August 2012 [22]. A larger age range for young people with PWS was implemented for participation because of the syndrome’s low prevalence and the lack of full sexual maturation in PWS [4], which places these young people at similar pubertal developmental stages as children without PWS. All PWS participants provided genetic testing documentation to confirm diagnosis: deletion (n = 10) and imprinting defect (n = 1). Young people with PWS also reported currently (n = 7), previously (n = 3) or never (n = 1) taking growth hormone replacement therapy. All participants and parents gave their informed assent and consent for inclusion before they participated in the study. The study was conducted in accordance with the Declaration of Helsinki, and the protocol was approved by the Institutional Review Boards from California State University, Fullerton (HSR# 13-0434), the Children’s Hospital of Orange County (IRB# 80308), and the United States Army Medical Research and Materiel Command (HRPO Log No. A-14648.1aii). A medical history questionnaire (completed by parents of participating children) and medical examination (young people with PWS only) determined participants with contraindications, excluding them from the study. Children with diabetes mellitus type 2, confirmed pregnancy or those unable to participate in moderate to vigorous physical activity were excluded from participation.

Participants consumed a standardized breakfast (containing 260 kcal) two hours prior to visit arrival. After a five-minute walking or cycling warm-up participants completed the exercise trial. The dynamic resistance protocol consisted of six sets of 10 repetitions per leg of a step-up exercise onto an adjustable height platform while wearing a weighted vest [25,26]. One-minute rest periods separated each set. Relative work was standardized for all participants. For lean and obese, platform height was calculated as 20% of stature and vest load as 50% of lean body mass. To account for potential morphological or balance issues inherent to the syndrome, platform height was the same for all young people with PWS (23.0 cm); therefore, calculated vest load was modified such that relative work was equivalent among groups. For young people with PWS, the following calculation was used:
HR was measured at rest, throughout the exercise trial and for one minute during recovery (HRR). During the recovery period, participants were instructed to cease all activity and sit quietly and erect on the step. HRR was evaluated using calculated HRR value (HRRV). The value 30-s HRRV (HRRV30) was calculated as the difference between end of exercise HR and HR recorded after 30 s of exercise [15,16,27], while 60-s HRRV (HRRV60) was the difference after 60 s of exercise [27,28,29]. SBP and DBP were measured at rest, midway through and at the end of exercise. RPE was recorded at the end of each set. Time to complete the resistance trial was also recorded.

Analyses were conducted using IBM SPSS Statistics 20 for Windows (SPSS, Inc., Chicago, IL, USA). One-way analysis of variance (ANOVA) tests were used to determine group differences for participant characteristics and all exercise responses. Due to the larger age range and varying usage of growth hormone replacement therapy in our group of young people with PWS, ANCOVAs for HRRV were initially ran controlling for these variables. However, these factors were not significant; thus, a three (group) by two (time) multivariate ANOVA was conducted to determine group differences for HRRV. Tukey’s post hoc tests were used to determine pairwise differences when group differences were significant. Significance level was set at p < 0.05 for all analyses. Sigma Plot for Windows version 10.0 (Systat Software, Inc., San Jose, CA, USA) was used to generate Figure 1. 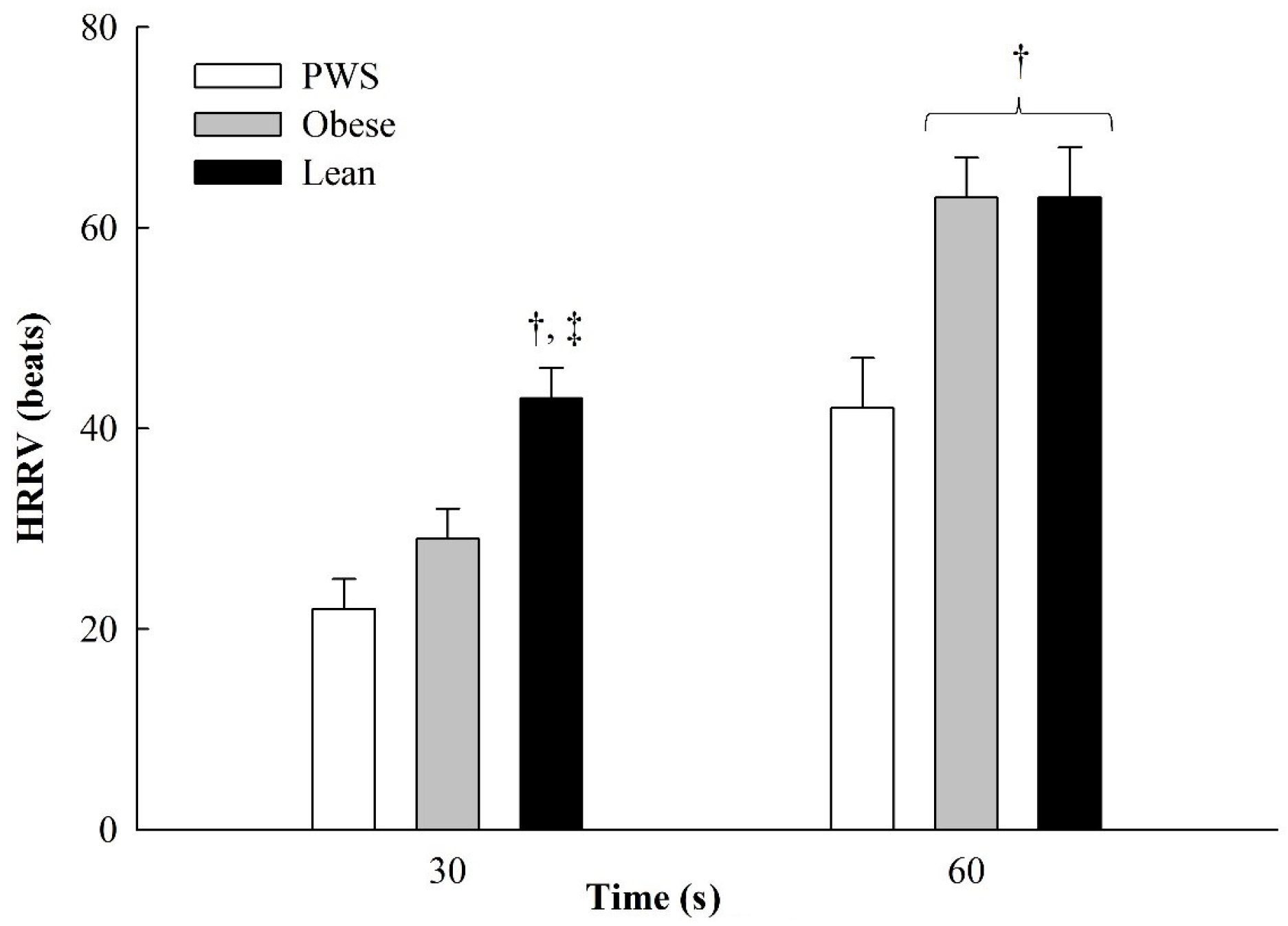 Participant characteristics are presented in Table 1. Young people with PWS were significantly older than lean (p = 0.02) and obese (p < 0.05). As expected, young people with PWS and obese presented with a significantly greater body mass, BMI, BMI z-score, body fat percentage and resting SBP compared to lean (p < 0.02 for all). Groups were similar for all other comparisons (see Table 1). Exercise responses are also presented in Table 1. Compared to lean and obese, young people with PWS had a lower platform height (p < 0.01 for both) and took longer to complete the exercise trial (p ≤ 0.01 for both). All other exercise responses were similar among groups with the exception of vest load, with young people with PWS carrying a heavier load than lean (p = 0.02). Additionally, lean presented a lower mid-exercise SBP than obese (p = 0.03).
Table 1. Participant characteristics and responses to dynamic resistance exercise by group, presented as frequency or mean (SE).
† = different than PWS. ‡ = different than obese. Significance level set at p < 0.05.

The authors would like to thank the participating children and their families, as well as the staff from the CHOC Specialty Care Clinic. Additionally, we would like to acknowledge Jason Ng, Jeremy Tan, William Wallace, James Tufano, Hoang Pham, and Andrea Duran for their help with data collection. This study was funded by United States Army Medical Research and Materiel Command Award W81XWH-08-1-0025.