This paper presents the bandwidth improvement for dual-band power divider using complex isolation network while maintaining physical port separation. The conventional port-extended power dividers suffered from narrow system bandwidth. A rigorous analysis revealed that such problem was mainly due to the limited impedance bandwidth caused by the odd-mode bisected network. Moreover, the isolation bandwidth provided by the parallel L-C topology in the conventional approach was also limited. To overcome such technical issues, a serial L-C topology was proposed. Derivations of the impedance bandwidth through even- and odd-mode network analysis have been performed and optimal system bandwidth could be achieved when the reflection coefficients of the corresponding bisected networks exhibited minimum frequency dependence. Based on the theoretical analysis, simultaneous achievement of bandwidth broadening, size compactness, and physical port extension at both frequencies is possible with optimum combinations of the design parameters. The experimental results evidenced that other than the improvement in system bandwidth, the fabricated prototype featured low extra insertion loss, good isolation across the bands, and compactness in size while maintaining physical separation between the split ports compared with previously published works. View Full-Text
Keywords: system bandwidth; physical port separation; dual-band system bandwidth; physical port separation; dual-band
►▼ Show Figures 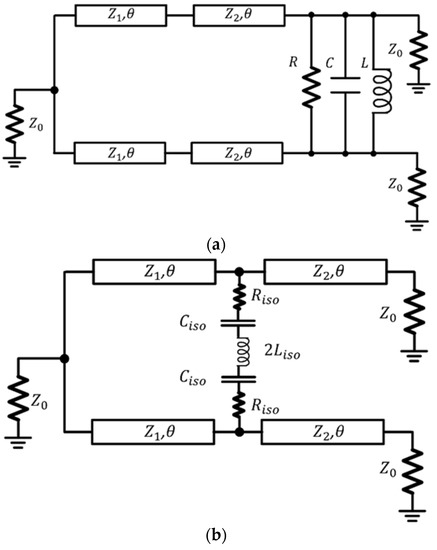