In this paper, the performance of a new Z-source inverter (ZSI)-based single-stage power conditioning system (PCS) is analyzed for a standalone photovoltaic (PV) power generation system. The proposed ZSI-based PCS includes two main parts: one is the input from PV units and the other is the ZSI. In this work, a new topology, termed the switched inductor-assisted strong boost ZSI (SL-SBZSI), is introduced for improving the performance of the PCS. The proposed topology shows high boosting capability during the voltage sag in PV units due to variations in solar irradiation and temperature. Another key advantage is the reduced capacitor voltage stress and semiconductor switch voltage stress of the inverter bridge, which ultimately minimizes the size and cost of the single-stage PCS. The proposed ZSI topology falls under the doubly grounded category of inverter by sharing the common ground between the input and output. This is an additional feature that can minimize the leakage current of PV units at the ac output end. The operational principles, detailed mathematical modeling, and characteristics of the proposed SL-SBZSI for a standalone photovoltaic (PV) power generation system is presented in this paper for analyzing performance. The simulation results, which are performed in MATLAB/Simulink, demonstrate the improved performance of the proposed SL-SBZSI for the standalone PV system. The performance of the proposed topology is also evaluated through an experimental validation on a laboratory-based PV system. View Full-Text
Keywords: photovoltaic (PV) system; boost factor; Z-source inverter; shoot-through; switched inductor photovoltaic (PV) system; boost factor; Z-source inverter; shoot-through; switched inductor
►▼ Show Figures 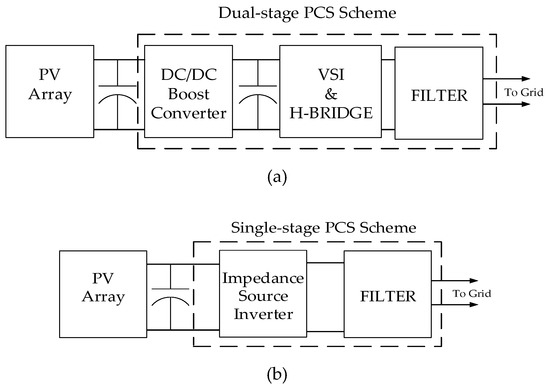