:
This paper presents a new approach to suppress interference between neighbouring radiating elements resulting from surface wave currents. The proposed technique will enable the realization of low-profile implementation of highly dense antenna configuration necessary in SAR and MIMO communication systems. Unlike other conventional techniques of mutual coupling suppression where a decoupling slab is located between the radiating antennas the proposed technique is simpler and only requires embedding linear slots near the periphery of the patch. Attributes of this technique are (i) significant improvement in the maximum isolation between the adjacent antennas by 26.7 dB in X-band and >15 dB in Ku and K-bands; (ii) reduction in edge-to-edge gap between antennas to 10 mm (0.37 λ); and (iii) improvement in gain by >40% over certain angular directions, which varies between 4.5 dBi and 8.2 dBi. The proposed technique is simple to implement at low cost.
Keywords:
Mutual coupling suppression; slotted array antennas; synthetic aperture radar (SAR); Multiple-Input Multiple-Output (MIMO) systems; decoupling method

Multiple-input multiple-output (MIMO) systems enable high-capacity wireless communications without increasing the signal bandwidth or signal-to-noise ratio (SNR). This is because the multiple data streams can be transmitted simultaneously by using multiple antennas (antenna array) at the transmitter and receiver. To realize compact MIMO antennas the critical challenge is to minimize the signal correlation between antennas over a wide frequency range. When multiple antennas are placed close the mutual coupling can degrade the radiation performances of the antennas and the channel capacity of MIMO systems.
Antenna size is determined mainly by its operating frequency, and therefore antennas occupy the largest space in wireless communication systems. Reducing the antenna size can be challenging as many factors need to be considered including size, weight, performance and cost of manufacture. Although array antennas based on microstrip integrated technology improve these factors; however, the strong mutual coupling between the adjacent antennas can severely degrade the antenna’s performance in terms of gain, bandwidth and radiation pattern. It is evident in [1,2,3] that although the proximity of the radiating elements in MIMO satisfies the required compactness but this is at the cost of performance degradation.
To enable the widespread use of microstrip-based antenna arrays therefore requires the reduction of the mutual coupling between the array elements. In addition, to extend the beam scanning range of MIMO antennas, a smaller gap between antennas is necessary in the array to enable the scanning over a large angle. However, as the mutual coupling is predominantly strong in closely spaced antennas this can deteriorate the input impedance of each radiating element in the array to adversely affect the radiation efficiency and radiation pattern of the array [4,5].
Various techniques have been previously proposed to reduce the mutual coupling between adjacent elements in an antenna array including the use of cavity backed [6], substrate removal [7], defected ground structures (DGS) [8], metamaterial insulator [9], slotted complementary split-ring resonators [10], defected wall structure [11], and employing electromagnetic band gap (EBG) structures between two patches in microstrip antennas [12]. Although these techniques improve the reduction in mutual coupling however this is not enough for MIMO systems where compactness is required.
This paper presents a novel technique to reduce mutual coupling between adjacent radiating elements in an antenna array by increasing the isolation between the elements. Unlike conventional techniques where decoupling slab or DGS is inserted between neighbouring antennas in the array the proposed technique involves simply of embedding different lengths of slots near the outer most edge of the radiating patch. The proposed technique should enable the realization of highly dense antenna configuration with a reduced form factor which is necessary in SAR and MIMO communication systems. The resulting antenna array with the proposed technique is shown to exhibit significantly improved isolation between neighbouring patch elements (26.7 dB in X-band and >15 dB in Ku and K-bands) and optimum gain performance (4.5–8.2 dBi) over certain angular directions. With the proposed technique the gap between the patches is reduced which should enable the design of a compact antenna array with the ability to scan over a larger angle.

The reference array antenna is a 1 × 2 arrangement of rectangular microstrip patches, as shown in Figure 1a. Standard patch design was used to implement it on a standard FR-4 lossy substrate with dielectric constant of = 4.3, tan = 0.025, and thickness of 1.6 mm. The performance of the antenna was verified using two commercially available 3D electromagnetic tools, namely, CST Microwave Studio® (Darmstadt, Germany) and ANSYS High Frequency Structure Simulator (HFSS). The two patches are identical in size with dimensions of 25 × 20 mm2 and edge-to-edge distance between radiation elements of 10 mm.
The return-loss (S11) and isolation (S12) of the reference array are plotted in Figure 2. It’s clear that, the reference antenna array covers three bands, i.e., X, Ku, and K. To increase the isolation between elements in the array linear slots are embedded around the periphery of the patch, as illustrated in Figure 1b. Dimensions of the slot are given in Figure 1b, and the overall size of the array is given in Figure 1c. The return-loss and isolation response of the reference and proposed antenna array are shown in Figure 2. The average and peak mutual coupling improvement resulting from the proposed technique are 14 dB and 26.7 dB (X-band); 10 dB and 12.6 dB (first Ku-band); 13 dB and >11 dB (second Ku-band); and 10 dB and 15 dB (third Ku-band and K-band). Table 1, Table 2, Table 3 and Table 4 are given to facilitate comparison the maximum and average isolation of the reference and the proposed arrays over X, Ku and K-bands, where the bandwidth is defined for . It is also evident from the plots in Figure 2 that the slotted antenna array has a significantly better impedance match performance than the reference array. With the proposed technique the overall antenna design is simple, and the linear slots etched in the patch are easy to implement in practice, which thus reduces the overall manufacturing cost of the antenna array.
The input impedance and admittance of the proposed slotted antenna array its operating range using circuit model and CST Microwave Studio® are shown in Figure 3. There is very good correlation in input impedance and admittance responses between the circuit model and CST Microwave Studio®.
Surface current distribution over the reference and the slotted antenna array are shown in Figure 4. It is evident from these figures the slots behave as a decoupling structure that soak up the surface waves that would otherwise couple with the adjacent radiating elements.
Radiation patterns of the simple reference (Sim.) and proposed slotted (Slo.) antenna arrays in the horizontal (H) and vertical (V) planes are shown in Figure 5. After applying the proposed slots to the patch array the radiation pattern in the H-plane is distorted with large variation in the radiation pattern. Over certain angular directions the array exhibits better gain performance than others. At 11.37 GHz the gain varies from 5.9 dBi to 8.2 dBi, and at 15.9 GHz it varies from 3.1 dBi to 4.5 dBi.
The performance of the proposed technique is compared with other mutual coupling reduction mechanisms in Table 5. Application of decoupling slab between the array elements is a popular conventional technique. Although this results in reducing mutual coupling it does not contribute in reducing the overall size of the array. It is demonstrated here that the proposed technique provides a simple solution of both reducing the surface currents and therefore enhancing the isolation between neighbouring radiators, and overall size reduction, but further work is needed to improve its radiation characteristics. The proposed method offers an average and maximum isolation between transmit and receive antennas of ~15 dB and more than >26 dB, respectively, over a narrow angular range which is better than other techniques. The advantage of the proposed technique is its simplicity.

A simple technique is demonstrated that shows reduction in mutual coupling between adjacent radiating elements, which also allows the edge-to-edge gap between adjacent elements in an array to be reduced. This should enable beam-scanning over a larger angle in MIMO systems. This was achieved by embedding different lengths of slots near the periphery of the patch antenna. The resulting antenna array exhibits significantly improved isolation between neighbouring patch elements and gain performance over a narrower angular direction.

Writing: Original draft preparation was made by M.A.; Supervisor and Project Administration, E.L.; Funding Acquisition, R.A.-A.; For other cases, all authors have participated.

This work is partially supported by innovation programme under grant agreement H2020-MSCA-ITN-2016 SECRET-722424 and the financial support from the UK Engineering and Physical Sciences Research Council (EPSRC) under grant EP/E022936/1. 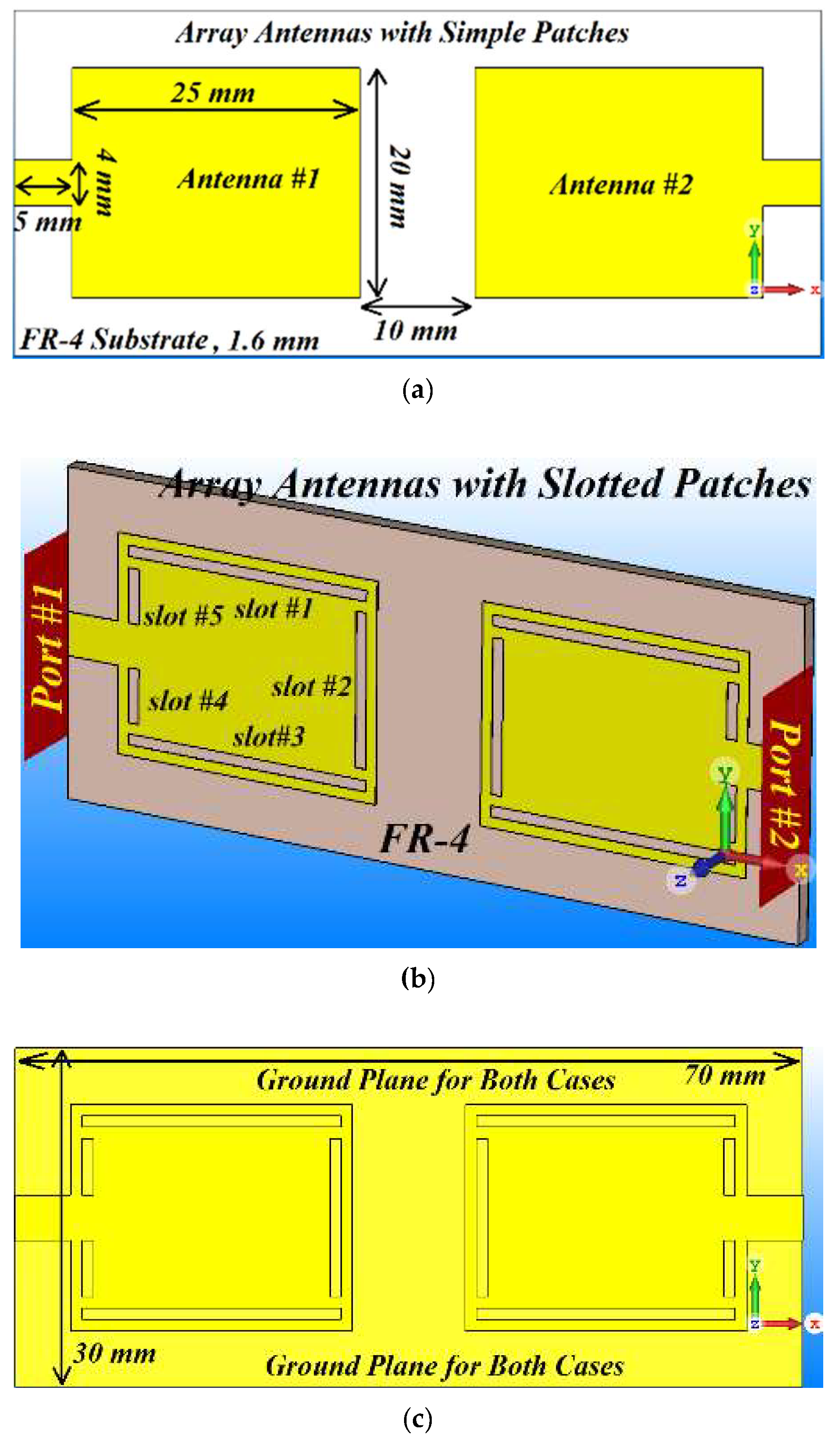 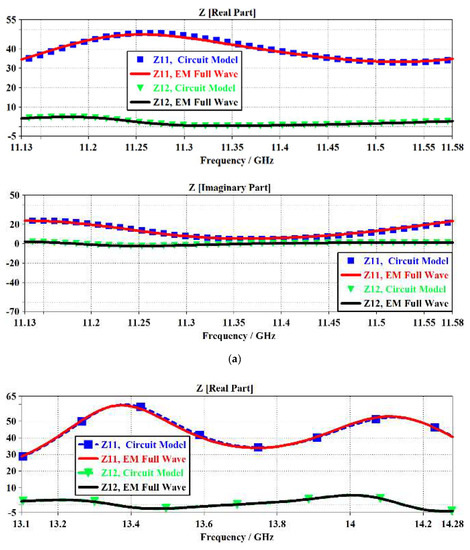 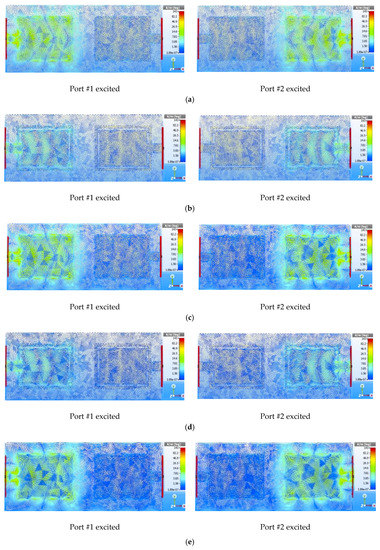