Semantic and Dweller-Based Decision Support System for the Reconfiguration of Domestic Environments: RecAAL

A zero-power microwave sensor is reported for the real-time assessment of water quality. The proposed structure is able to transmit sensed data directly to a base-station without additional data processing at the wireless sensor node (WSN) which results in less power consumption. The base-station propagates a single tone signal at the frequency of f0/2. At the sensing node, an antenna absorbs that signal and a passive frequency doubler makes its frequency twice, i.e., f0, which will be used as the carrier signal. Two pairs of open-ended coaxial probes are used as liquid sensors; one inside a known reference sample and the other one inside the water under test. A combination of both sensors’ data will be sent to the base-station. A special six-port structure is used for modulation of sensed data over the carrier. At the base-station, a receiver will demodulate the received signal for extracting the sensed data. As an example, the system has been evaluated at f0 = 2.45 GHz for the detection of Humic-Acid levels as a common contaminant of river waters. View Full-Text
Keywords: Internet of things (IoT); real-time assessment; reflection-based; six-port structure; unpowered; wireless sensor node (WSN) Internet of things (IoT); real-time assessment; reflection-based; six-port structure; unpowered; wireless sensor node (WSN)
►▼ Show Figures 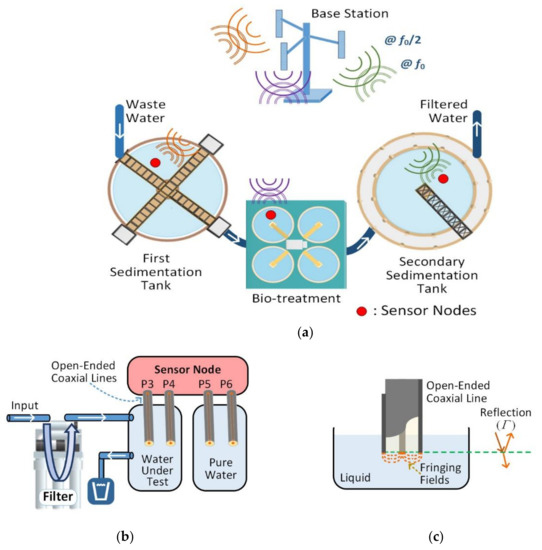