Memristors as Candidates for Replacing Digital Potentiometers in Electric Circuits

The memristor is the fourth fundamental circuit element. It was envisioned and postulated by Chua [1]. The four fundamental two-terminal (one-port) elements of electric circuits can be axiomatically defined via a constitutive relation between a pair of circuit variables [2]. The four basic circuit variables are current , voltage , flux , and charge . By definition,
is the initial state of at the initial time ,
is the initial state of at the initial time .
The variables and are time integrals of the variables and , respectively; they need not be associated with a real physical charge or a real physical flux.
The axiomatic definition of the fundamental electric circuit elements is shown in Figure 1.
The ideal charge-controlled memristor is defined by the constitutive relation via the -dependent Ohm’s law where is called the memristance at . is a continuous and piecewise-differentiable function with bounded slopes. The memristance at any time depends on the entire past history of the element’s current.
Probably, the key feature of the memristor is that it exhibits analog non-volatile memory: when a memristor is opened/short-circuited, or when the excitation/power is switched off, the memristor holds its memristance/state.
Practically, the memristor can be identified by its distinctive “fingerprint”:

(1)
Assume arbitrary initial conditions.
(2)
Excite the device by a periodic bipolar voltage or current with both positive and negative values (the mean value should be zero, no DC component).
(3)
Observe a pinched hysteresis loop, a double-valued Lissajous figure passing through the origin, confined to the first and the third quadrants of the - plane.
(4)
Increase the excitation frequency (theoretically to infinity) and observe that the loop shrinks continuously to a straight line whose slope depends on the excitation waveform.

2. Comparison between Frequency Characteristics of the Potentiometer and Memristor

3. Evaluation of Memristor Tunability and Persistence

Some of the biggest concerns related to memristors are variability, tunability, retention and endurance. Variability is primarily related to the minimum and maximum memristance values. These values are fabrication dependent and cannot be significantly extended by programming procedures. Another pair of constrains are (1) repeatability of memristors programming states during multiple cycles within one memristor, and (2) repeatability of target memristance value with different memristors. These two constrains are tackled by programming techniques.
When it comes to memristor programming, our work relies on results [27,28,29,30] published by the team lead by Vourkas. To the best of our knowledge, the best programming results of KnowM memristors were published by his team. In [28] the team compares programming techniques using a voltage divider with a memristor and a so-called current sensing technique with an operational amplifier that introduces a virtual ground. In both cases, the memristance target value was measured using ADC. In theory, the number of states of a memristive device depends on the precision of the used ADC, which is, for modern ADCs, around 216 ≈ 65,000 or even 224 ≈ 16.5 × 106 states. In [27] the authors describe that there are two major phases of memristance programming: (1) large amplitude programming pulses that are used to quickly reach the target resistance in a short time, but with cruder precision (±250 Ω), and (2) small amplitude signals of different polarity for fine-tuning the target memristance. Results provided in [28] were obtained by repeating the same programming pulses for 50 iterations, for each state. They achieved great repeatability which differs no more than 4% (around ±150 Ω at 1.8 kΩ) of the target memristance. The team’s results show how states within the range of1 kΩ to around 100 kΩ were achieved using programming pulses in less than 100 ms. In addition to Vourkas’s team, we experimented with the memristors’ extreme values, and obtained results of 1 MΩ and 450 Ω by directly applying a DC voltage to a memristor, without a current limiting resistor.
In order to examine retention and endurance of memristor states, we conducted a series of experiments. We excited memristor–resistor voltage divider by a sinusoidal waveform and tracked memristance values. Frequency was set to 10 kHz as it is the most critical frequency in the defined operational range of a memristor. The signal amplitude was varied. The duration of each test was 10 min. In Figure 9 we display results for different states of the memristor, where memristance values are in range from 800 Ω to 180 kΩ.
When the excitation signal amplitude was 0.5 V or below, the memristor preserved stable states. For amplitudes of around 1 V, the memristance had not changed dramatically during the time, but the sinusoidal waveform was degenerated. We noticed that memristors are sensitive to DC currents even if they were of the order of a couple of microamperes. This fact can be interpreted as a downside due to oversensitivity. With proper compensation of electric circuits, this problem can be eliminated. On the other side, high sensitivity can be used as a tool for the slow gradual change of memristance value during operation.

4. Comparison between Key Features of Memristors and Potentiometers

According to experimental results, the memristor has better characteristics at higher frequencies compared to the potentiometer. This fact opens up the possibility that memristors can be used instead of potentiometers. We analyze various circuit designs based on the memristor and potentiometer, such as a voltage divider, an inverting amplifier, a high pass filter, and a phase shifter. We implemented laboratory prototypes of these memristor-based circuits in order to present potential applications. In order to better observe the advantages of memristors, we select to analyze analog circuits with typical functionalities.

The first example is a voltage divider which uses a potentiometer to control signal attenuation. Realization of this circuit with a memristor is proposed in Figure 6a. For this analysis, we selected a resistor R1 = 10 kΩ.
When the voltage divider is realized with a memristor or a potentiometer, the voltage gain function is where is equal to .
In order to illustrate the comparison between these two realizations, we present the voltage gain function in Figure 10. We measured responses of both potentiometer and memristive implementation. From Figure 10, it can be noticed that the realization with the memristor has a higher cutoff frequency. As the initial resistance value increases, the difference between potentiometer and memristor becomes more obvious.

The next example is an inverting amplifier which uses a potentiometer to control the voltage gain. Application of memristors in amplifiers was theoretically proposed [18,24,40]. Some authors propose memristor usage in variable gain amplifier (VGA) [41] and automatic gain control (AGC) circuits [42].
Our realization of this circuit with a memristor instead of a potentiometer is proposed in Figure 6a. For this realization we selected the following resistor values: R1 = 46.4 kΩ, R2 = 29.3 kΩ, R3 = 45.4 kΩ, R4 = 45.7 kΩ, R5 = 1.95 kΩ, R6 = 1.93 kΩ. The operational amplifier used is a dual low-noise operational amplifier NA5532AP [43] from Texas Instruments [44], with a typical unity-gain bandwidth of 10 MHz. For this experimental analysis, the impedances of the oscilloscope probes can be neglected. At the circuit’s input the oscilloscope probe is connected in parallel with a voltage generator, whereas the resistor value R6 is chosen to be significantly lower than the probe’s impedance at the circuit’s output. In order to minimize the influence of input bias current through the memristor, we add the capacitor C1 (1 µF) in series with the memristor (Figure 11a). The capacitance C1 was chosen to have no effect on frequency response in the desired frequency band and the voltage gain function can be approximated as
On the other hand, this circuit realization with a potentiometer is presented in Figure 11b, and its voltage gain function is
In order to illustrate the comparison between these two realizations, we present the voltage gain function of both cases in Figure 12. We measured responses of the circuit with a potentiometer as well as with memristive implementation. Analyzing the results from Figure 12, we noticed that the realization with the potentiometer has dominant parasitic effects for lower values of voltage gain magnitude which corresponds to higher resistance values. On the other hand, the memristive circuit has a lower cutoff frequency for lower resistance values which corresponds to a higher value of voltage gain magnitude.
To have a better insight into this comparison, we present the response at the lower passband frequencies from 10 kHz up to 200 kHz, as shown in Figure 12b. The memrsitive circuit has almost the same cutoff frequency for all values of voltage gain. However, the circuit with a potentiometer has a higher cutoff frequency for higher values of voltage gain and vice versa. The voltage gain magnitude of a memristive circuit is almost flat within the whole analyzed frequency range with a maximal deviation of ±1 dB. For realization with the potentiometer, the maximal deviation is ±8 dB. It may be concluded that the memristor is a valid candidate to replace the potentiometer for higher resistance values.
In order to better identify the nature of peaks around 500 kHz of voltage gain magnitude, we have analyzed the comparison between a memristor and an ideal resistor (see Figure 13). The realization with an ideal resistor does not have the peak of voltage gain at around 500 kHz, which means that this peak is a result of parasitic capacitances of the potentiometer and memristor.

One of the examples is a high pass filter which uses a potentiometer to control the cutoff frequency. This group of devices were also proposed, and theoretical results are available in the open literature [24,25,40].
Our realization of this circuit with a memristor instead of a potentiometer is proposed in Figure 14, where the selected capacitor is C1=2 nF. For this experimental analysis, the impedances of oscilloscope probes can be neglected. At the circuit’s input the oscilloscope probe is connected in parallel with a voltage generator, whereas the capacitor value C1 is chosen to be significantly higher than the probe impedance at the circuit’s output. Than we analyzed this filter with a potentiometer in order to better notice a difference in relation to a memristor.
The high-pass filter with a memristor (potentiometer) has the cutoff frequency, approximately
Parasitic capacitors of the memristor and potentiometer have been neglected because their capacitances have a much lower value comparing to capacitor C1.
In order to illustrate the comparison between these two realizations, we present the magnitude response in Figure 15. For both implementations, with the potentiometer and with the memristor, the magnitude response has been experimentally verified. It can be seen that the magnitude responses are almost the same for both filter realizations.

This work was supported in part by the Ministry of Education, Science and Technological Development of the Republic of Serbia.

Data is contained within the article. The data presented in this study are available in this article. 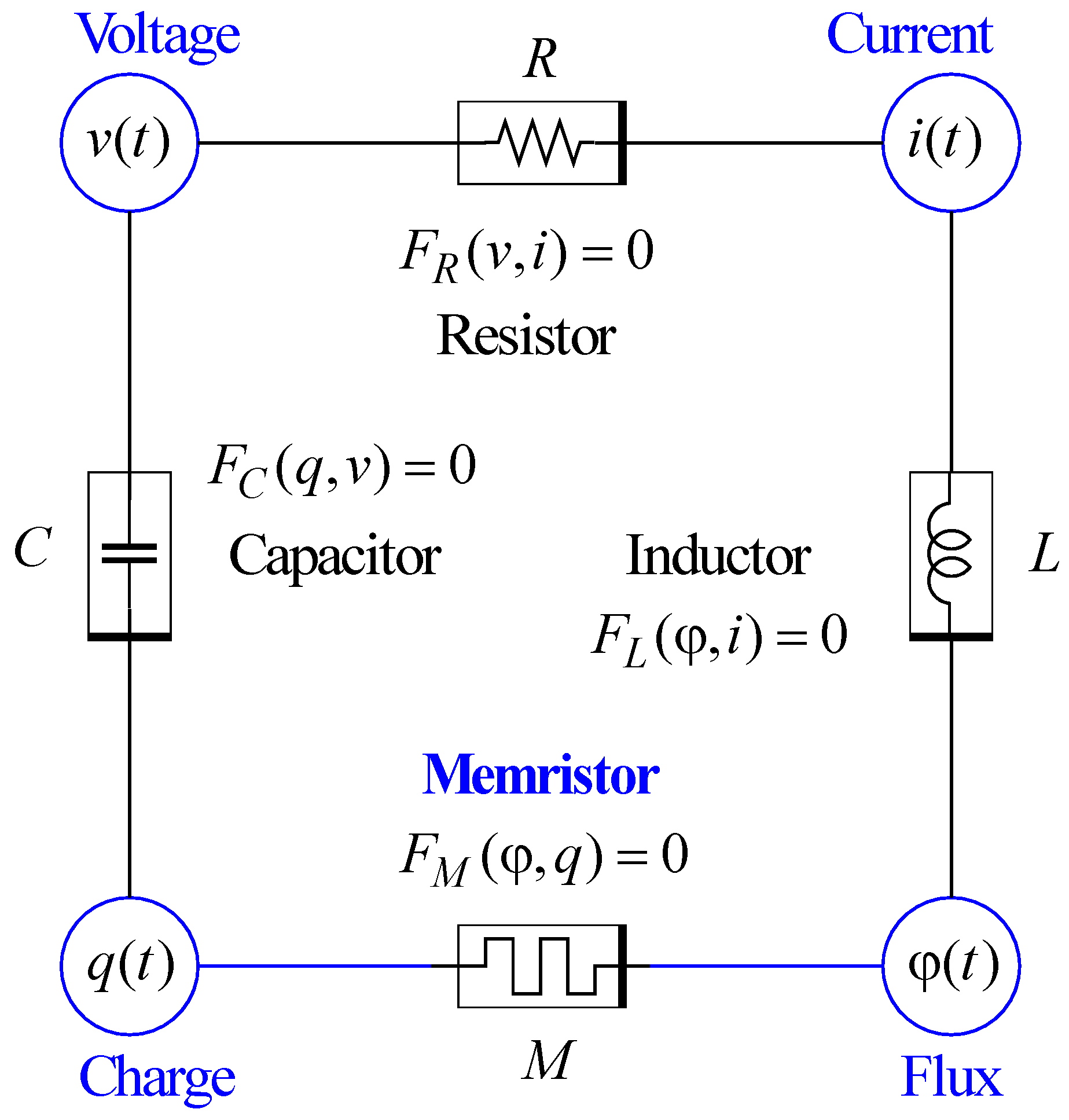 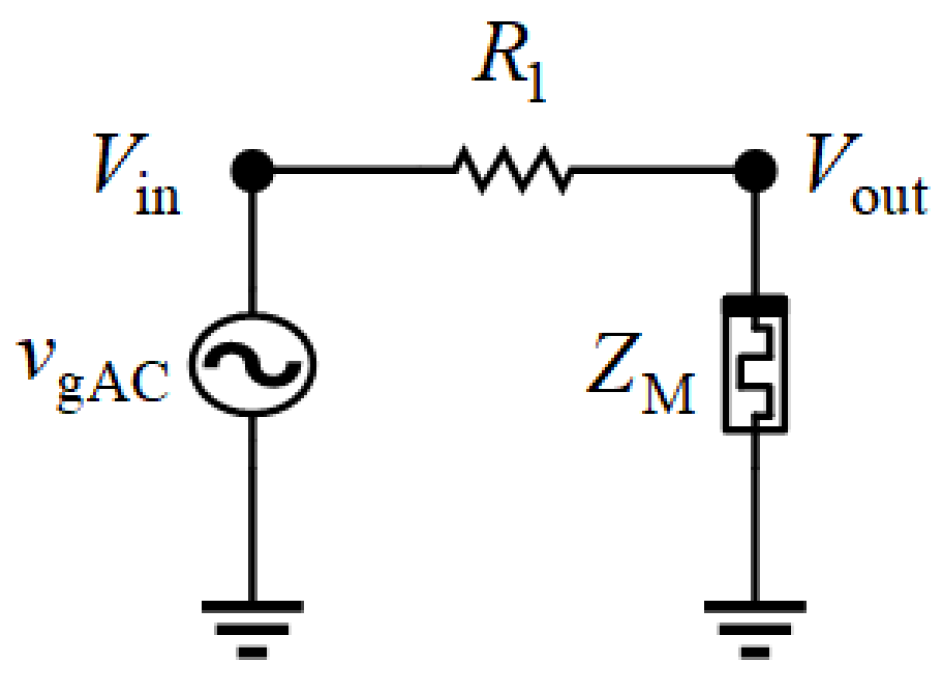 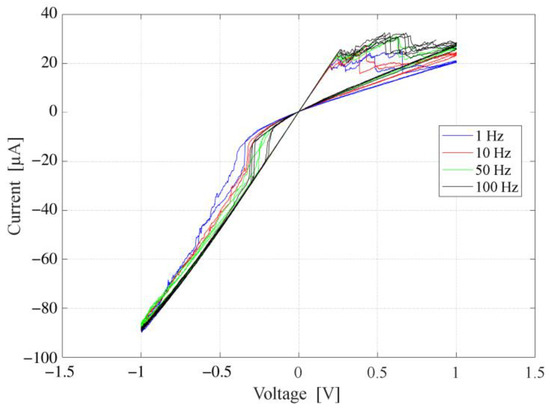 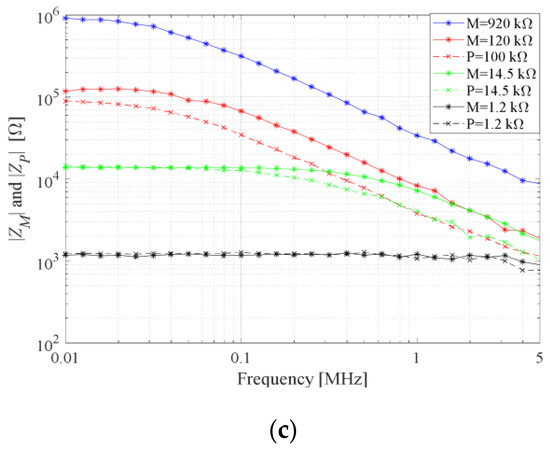 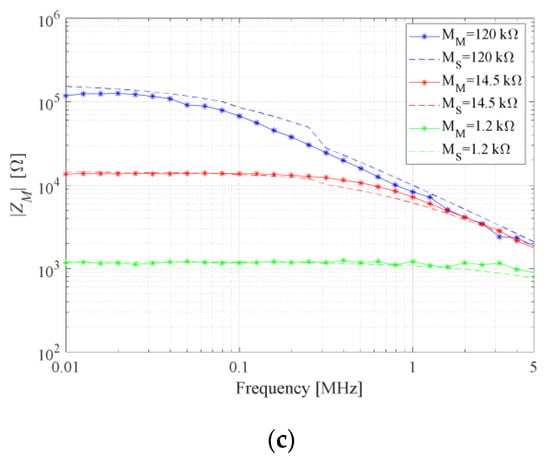 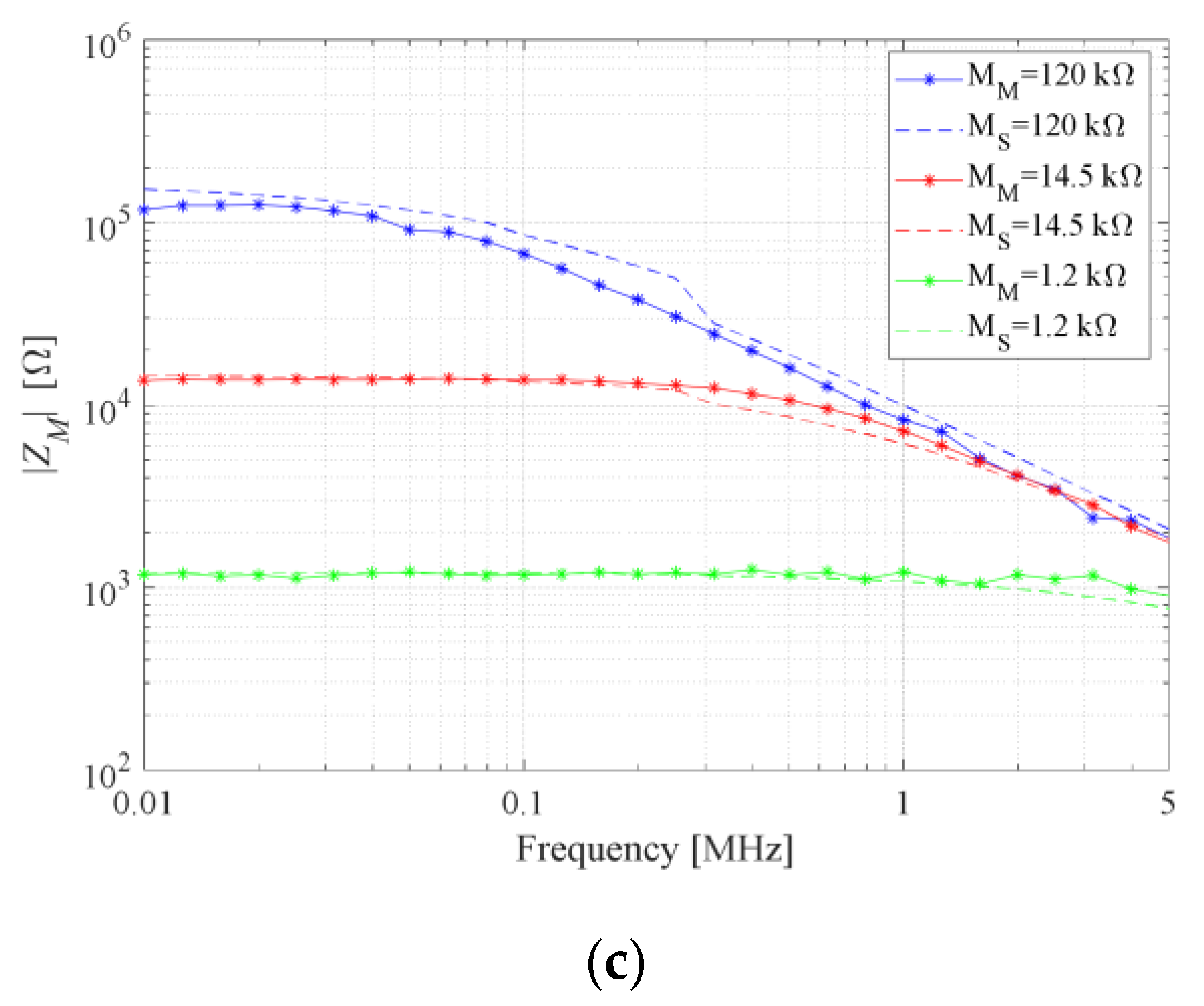 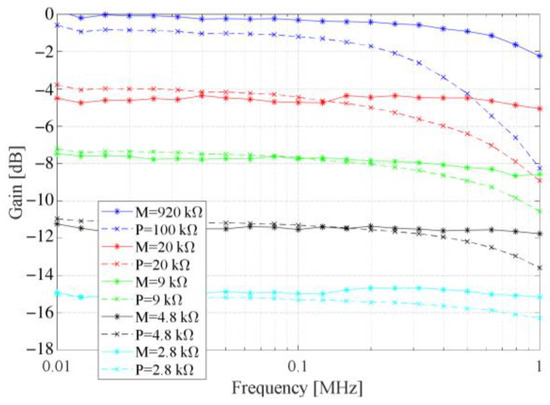 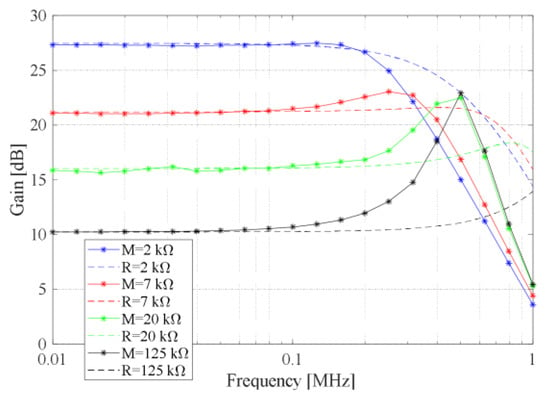 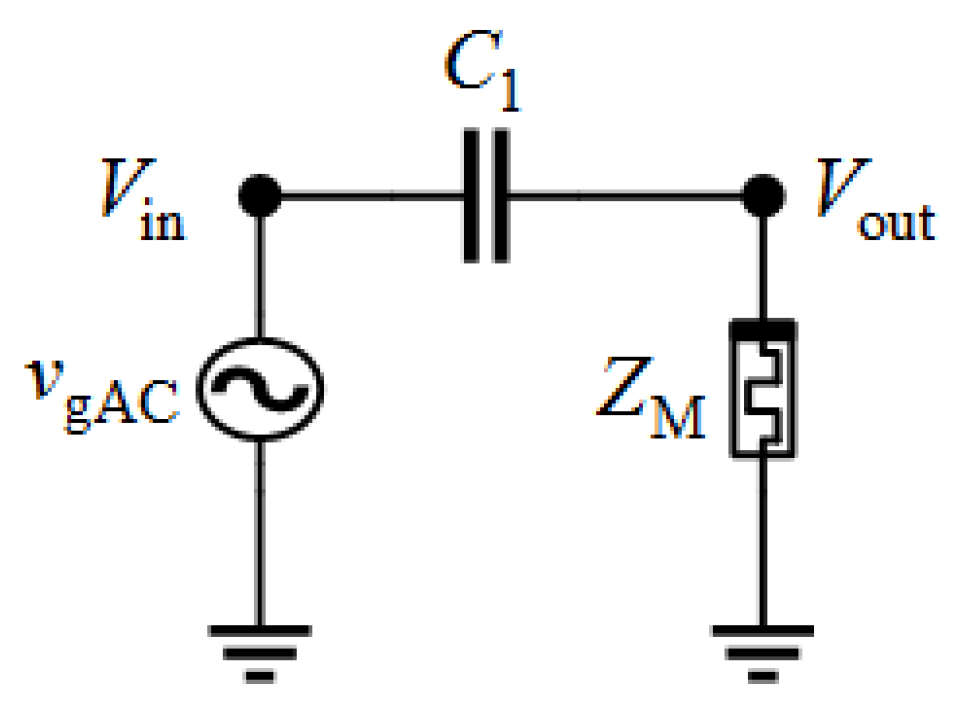 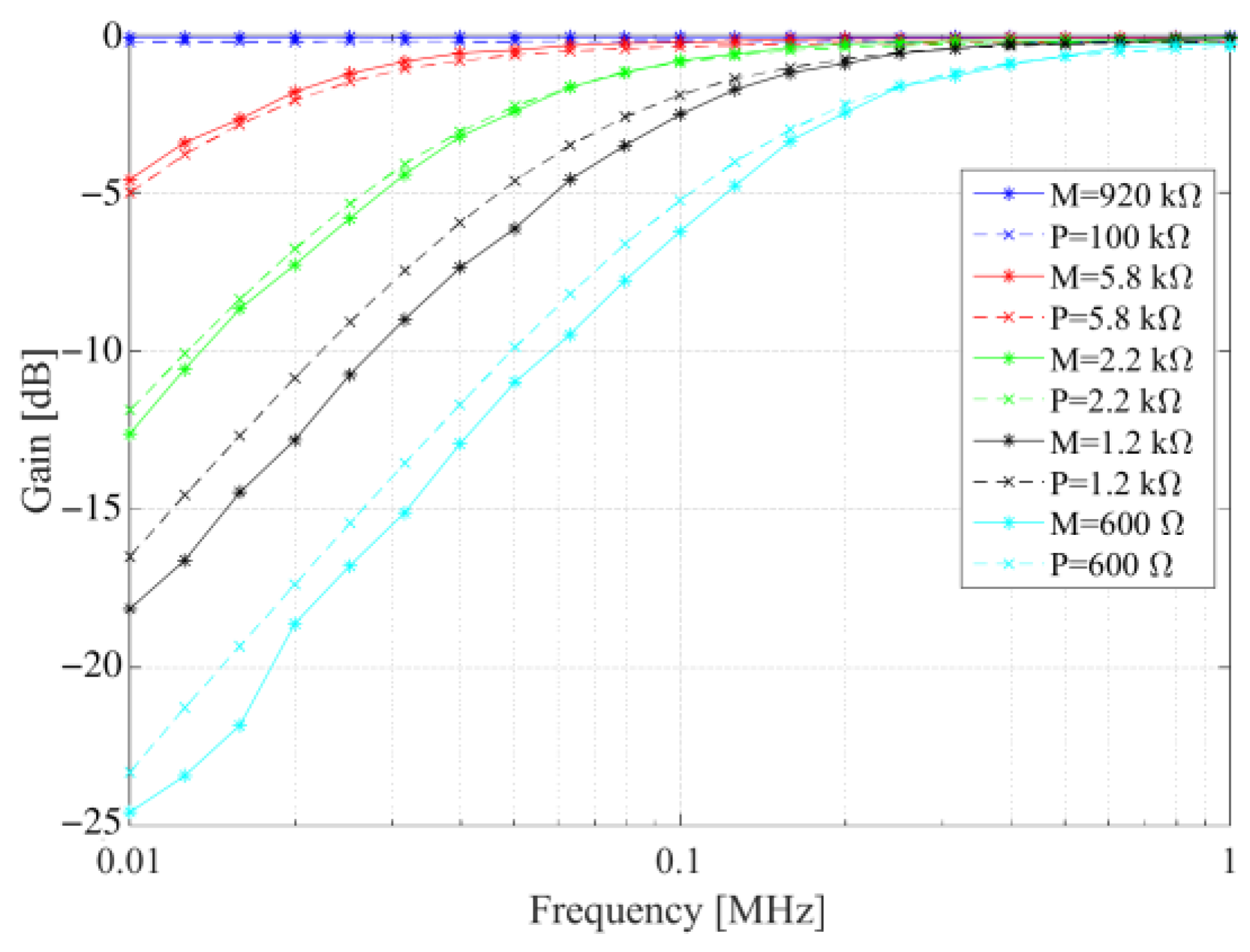 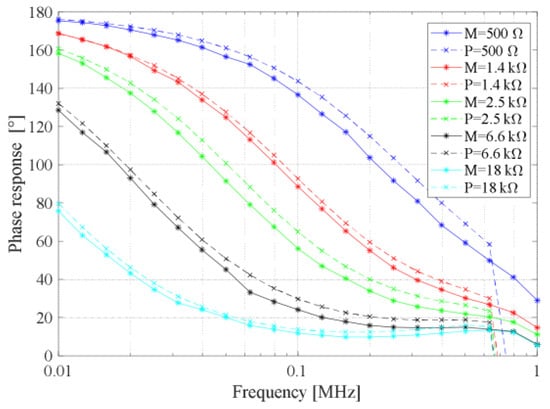 Table 1. Comparison: KnowM memristor vs. Potentiometer AD5270.
Table 1. Comparison: KnowM memristor vs. Potentiometer AD5270.
© 2021 by the authors. Licensee MDPI, Basel, Switzerland. This article is an open access article distributed under the terms and conditions of the Creative Commons Attribution (CC BY) license (http://creativecommons.org/licenses/by/4.0/).
We use cookies on our website to ensure you get the best experience. Read more about our cookies here.
Accept
We have just recently launched a new version of our website. Help us to further improve by taking part in this short 5 minute survey here. here.
Never show this again