Investigating the Suitability of Grape Husks Biochar, Municipal Solid Wastes Compost and Mixtures of Them for Agricultural Applications to Mediterranean Soils

Present work aimed at evaluating the leaching potential of grape husks biochar, municipal solid wastes compost and their combined application as amendments of sandy Mediterranean soil, in order to assess their capability of releasing/retaining nutrients or heavy metals and therefore their suitability for agricultural applications. Grape husks biochar was produced by pyrolysis at 500 °C in a fixed bed unit. Column leaching experiments, simulating Mediterranean rainfall conditions, were conducted. For all compost/biochar/soil combinations, alkali and alkaline earth metals showed greater solubility, increasing the pH of the extracts and thus decreasing the leachability of heavy metals Cr, Cu, Zr and Sr. Biochar co-application with compost did not prevent the leaching of nitrates, phosphates or trace elements; however, it did lower the chemical oxygen demand and allowed the slower release of sodium, calcium and magnesium from soil. As compared to compost, addition of biochar to soil increased the concentration of potassium by 76%, whereas it decreased that of heavy metals in the leachates by 40%–95%. Grape husks biochar could serve as a better soil amendment than municipal solid wastes compost and if carefully managed could be used as liming agent or fertilizer on acidic soils. View Full-Text
Keywords: amendment; biochar; compost; soil leaching amendment; biochar; compost; soil leaching
►▼ Show Figures 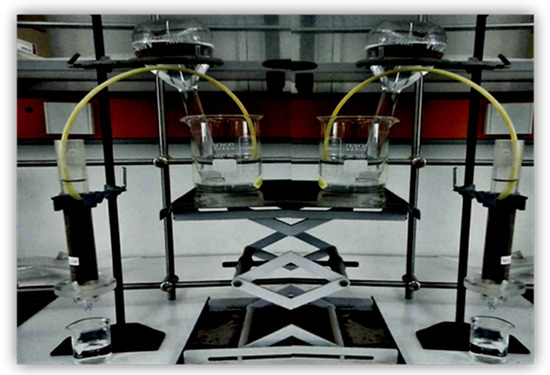