Social Life-Cycle Assessment of a Piece of Jewellery. Emphasis on the Local Community
Previous Article in Journal

:
Total soil carbon (TSC) is a composite (total) stock, which is the sum of soil organic carbon (SOC) and soil inorganic carbon (SIC). Total soil carbon, and its individual two components, are all important criteria for assessing ecosytems services (ES) and for achieving United Nations (UN) Sustainable Development Goals (SDGs). The objective of this study was to assess the value of TSC stocks, based on the concept of the avoided social cost of carbon dioxide emissions, for the contiguous United States (U.S.) by soil order, soil depth (0–20, 20–100, 100–200 cm), land resource region (LRR), state, and region using information from the State Soil Geographic (STATSGO) database. The total calculated monetary value for TSC storage in the contiguous U.S. was between $8.13T (i.e., $8.13 trillion U.S. dollars, where T = trillion = 1012) and $37.5T, with a midpoint value of $21.1T. Soil orders with the highest TSC storage midpoint values were Mollisols ($7.78T) and Aridisols ($2.49T). Based on area, however, the soil orders with highest midpoint TSC values were Histosols ($21.95 m−2) and Vertisols ($5.84 m−2). Soil depth was important, with the highest values of TSC storage being found in the interval 20–100 cm ($9.87T—total midpoint value, and $1.34 m−2—midpoint area density). The soil depth interval 0–20 cm had the lowest TSC storage ($4.30T) and lowest area-density ($0.58 m−2) value, which exemplifies the prominence of TSC in the deeper subsurface layers of soil. The LRRs with the highest midpoint TSC storage values were: M—Central Feed Grains and Livestock Region ($2.82T) and D—Western Range and Irrigated Region ($2.64T), whereas on an area basis the LRRs with the highest values were I—Southwest Plateaus and Plains Range and Cotton Region ($6.90 m−2) and J—Southwestern Prairies Cotton and Forage Region ($6.38 m−2). Among the U.S. states, the highest midpoint TSC storage values were Texas ($4.03T) and Minnesota ($1.29T), while based on area this order was reversed (i.e., Minnesota: $6.16 m−2; Texas: $6.10 m−2). Comprehensive assessment of regulating ES requires TSC, which is an important measure in achieving the UN SDGs. Despite the known shortcomings of soil databases, such as their static nature and the wide ranges of uncertainty reported for various soil properties, they provide the most comprehensive information available at this time for making systematic assessments of ecosystem services at large spatial scales.
Keywords:
accounting; assets; carbon emissions; CO2; ecosystem services (ES); total soil carbon (TSC); State Soil Geographic (STATSGO)

The 2030 United Nations (UN) Agenda for Sustainable Development and its 17 Sustainable Development Goals (SDGs) have engaged countries and stakeholders to establish a partnership to make this agenda a reality [1]. The ecosystem services (ES) framework, which is based on the concept of benefits people derive from nature, can be a useful tool in achieving the UN SDGs targets [2]. An ecosystem services framework provides four general services (provisioning, regulating, cultural, and supporting), which are often utilized by the soil science community to assess the multiple contributions of soils to ES [3]. Various soil properties (e.g., particle size, soil organic matter, etc.) were selected to describe ES and processes, but this list does not currently include soil inorganic carbon (SIC), and total soil carbon (TSC). Total soil carbon is the composite (total) stock (defined in a spatial context with units of kg m−2) composed of two separate constituent stocks: soil organic carbon (SOC) and soil inorganic carbon (SIC) (Table 1).
Soil organic carbon is a product of decomposing organic matter in the topsoil. Soil inorganic carbon is derived from soil (pedogenic) carbonates and usually found below the topsoil. Flows into or from these stocks can be considered equivalent to fluxes of CO2 sequestered or released in parts per million per meter squared per year. Carbon sequestered or released via SOC, SIC, or TSC is a complex process in the pedosphere-atmosphere exchange system (Table 2). Economic valuation of this process is a challenging problem since TSC is commonly commoditized (e.g., private, government), but CO2 emissions from TSC into the atmosphere (a common-pool resource) are “non-capturable” outcomes (externalities) with unidentified market value [4].
All types of soil carbon play an important role in regulating services by exchanging carbon with the atmosphere and providing the regulating ecosystem services of climate regulation and carbon sequestration. These regulating services underlie numerous SDGs including: (12) “Ensure sustainable consumption and production patterns”, (13) “Take urgent action to combat climate change and its impacts”, and (15) “Protect, restore and promote sustainable use of terrestrial ecosystems” [1].
Current research on soil carbon and ES is often focused on SOC and/or SIC as separate carbon stocks without considering the effect of TSC on ES [5,6]. This research shows that distributions of SOC and SIC are highly variable by location, depth, soil type, climate, topography, land use, and require site-specific management of carbon sequestration [6]. There is a need to consider soil carbon as a TSC for ES valuation. Total soil carbon can vary from being mostly SOC, or SIC, or to a composite of SOC + SIC (Figure 1a). For example, TSC is mostly SOC in Histosols (common in wetlands) in comparison to Aridisols (common in deserts), which are dominated by SIC (Figure 1). Examples of soils with composite TSC are Mollisols and Alfisols (both common in grasslands), agriculturally productive soils of the mid-west region of the U.S. (Figure 1b). Precipitation, temperature, and soil pH are some of the main factors controlling the spatial (horizontal) variation of different types of TSC with humid environments favoring the accumulation of SOC and arid environments favoring SIC accumulation (Figure 1a).
Soil survey data were designed, and traditionally have been used, as a resource to support provisioning ecosystem services (e.g., food, fiber production, etc.) and other human uses [7]. These soil survey data do not document changes with time in soil resources (e.g., SOC, SIC, TOC) caused by human activities over relatively short time scales (e.g., years, decades, centuries, or less), but do represent the current state of TSC for an accounting based on social cost of carbon (SC–CO2) and avoided emissions provided by carbon sequestration. Value of TSC has been reflected in the soil productivity ratings found in soil surveys, but this was typically related to crop production and not the inherent social value or cost of (SC–CO2) change. With an increase of awareness and evidence of human impacts on TSC, there is a need to find new strategies for presenting soil data in new forms and from new prespectives, for example, monetization of regulating ecosystems services (e.g., climate regulation etc.) provided by TSC to various soil survey users (Table 3).
The objective of this study was to assess the value of TSC in the contiguous U.S. based on the social cost of carbon (SC–CO2) and avoided emissions provided by carbon sequestration, which the U.S. Environmental Protection Agency (EPA) has determined to be $42 per metric ton of CO2 [8]. This study provides the monetary values of TSC by soil depth (0–20, 20–100, 100–200 cm) across the contiguous U.S. and by considering different spatial aggregation levels (i.e., state, region, land resource region (LRR)) using information previously compiled from the State Soil Geographic (STATSGO) database that has been reported by Guo et al. (2006) [9].

The present study is based on the TSC estimated values for the TSC storage (in Mg or metric tons) and content (in kg m−2) in the contiguous U.S. from Guo et al. (2006) [9]. A monetary valuation for TSC was calculated using the social cost of carbon (SC–CO2) of $42 per metric ton of CO2, which is applicable for the year 2020 based on 2007 U.S. dollars and an average discount rate of 3% [8]. According to the EPA, the SC–CO2 is intended to be a comprehensive estimate of climate change damages, but it can underestimate the true damages and cost of CO2 emissions due to the exclusion of various important climate change impacts recognized in the literature [8]. For the contiguous U.S., numbers for the minimum, midpoint, and maximum TSC storage and TSC content for all soils by depth (0–20, 20–100, 100–200 cm), state, region, and land resource region (LRR) were acquired from [9]. Total soil carbon storage and content numbers were then converted to U.S. dollars and dollars per square meter in Microsoft Excel using the following equations, with a social cost of carbon of $42/Mg CO2:
For example, for the state of Minnesota, Guo et al. (2006) [9] reported midpoint SOC storage and content numbers of 5416 × 106 Mg and 25.9 kg∙m−2, respectively, and midpoint SIC storage and content numbers of 295,235 × 104 Mg and 14.1 kg∙m−2, respectively. Summing together the SOC and SIC yields midpoint TSC storage and content numbers of 8.37 × 109 Mg and 40.0 kg∙m−2, respectively. Using these last two numbers together with a conversion factor for TSC to CO2 and the EPA dollar value for the SC–CO2 results in a midpoint TSC value of $1.29 × 1012 (about $1.29T or $1.29 trillion U.S. dollars) and an area-normalized midpoint TSC value of $6.16 m−2, respectively, for Minnesota.

3.1. Value of TSC by Soil Depth in the Contiguous U.S.

3.3. Value of TSC by Land Resource Regions (LRRs) in the Contiguous U.S.

3.4. Value of TSC by States and Regions in the Contiguous U.S.

We would like to thank Bosch, and the reviewers for their constructive comments and suggestions. 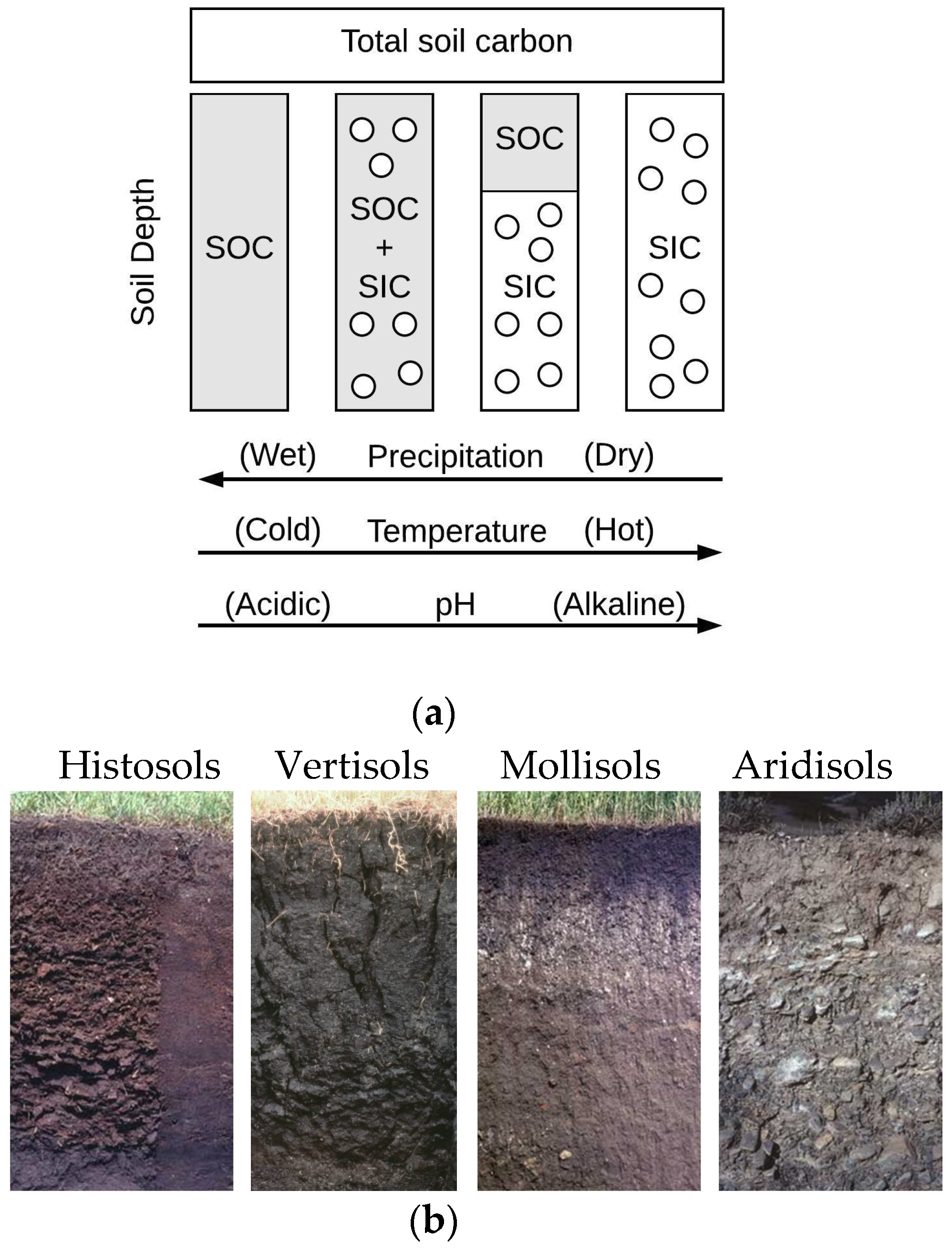 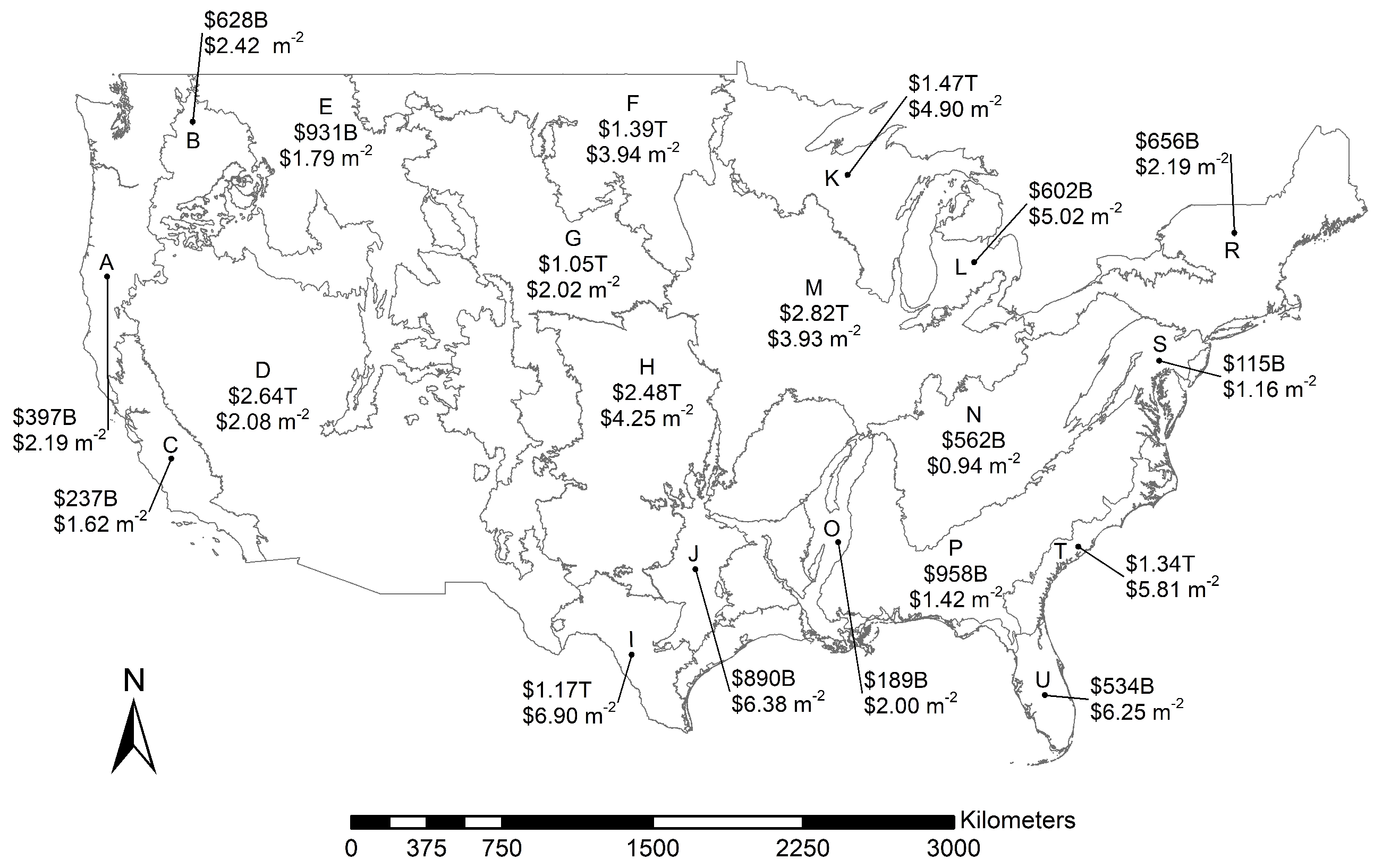 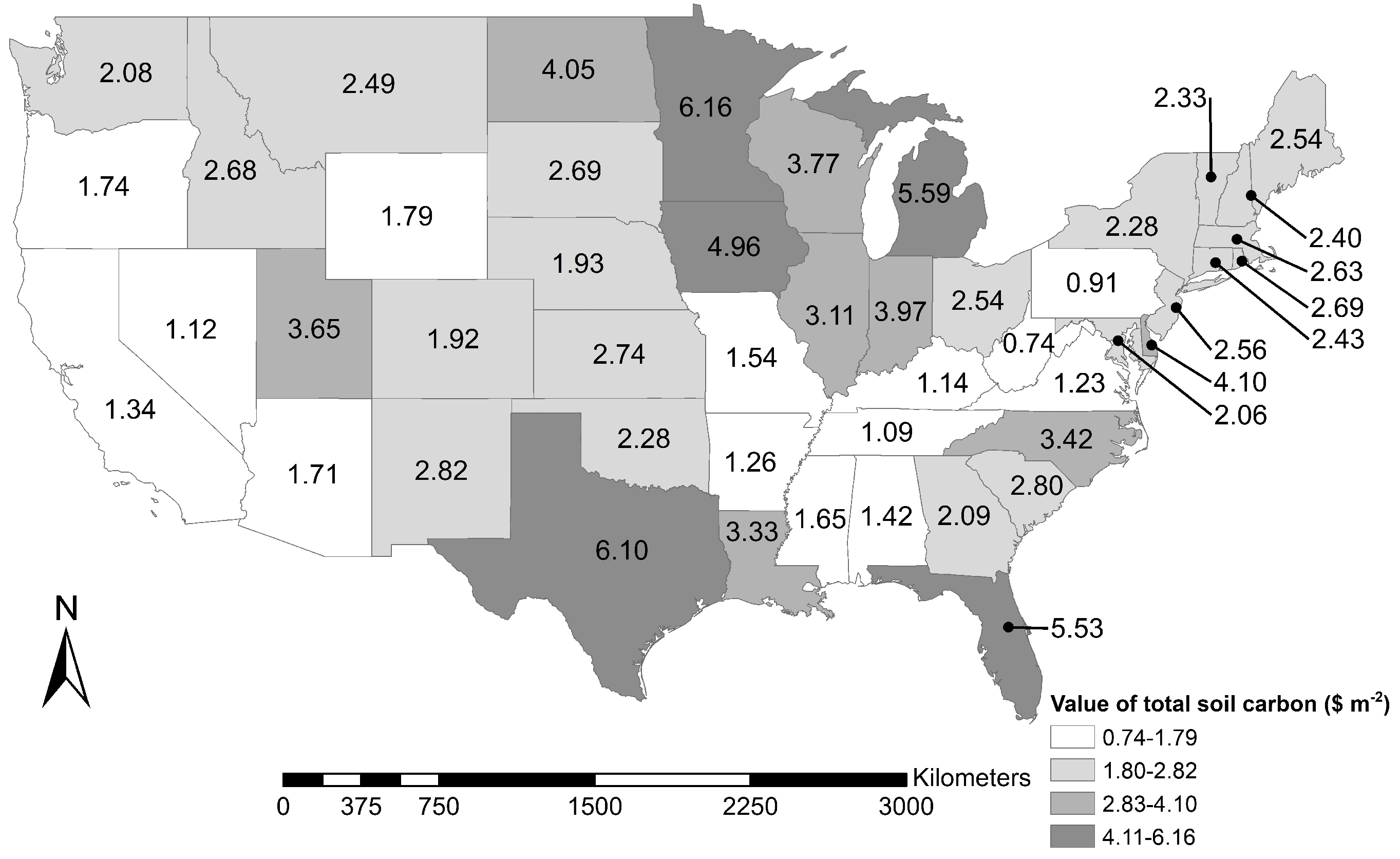 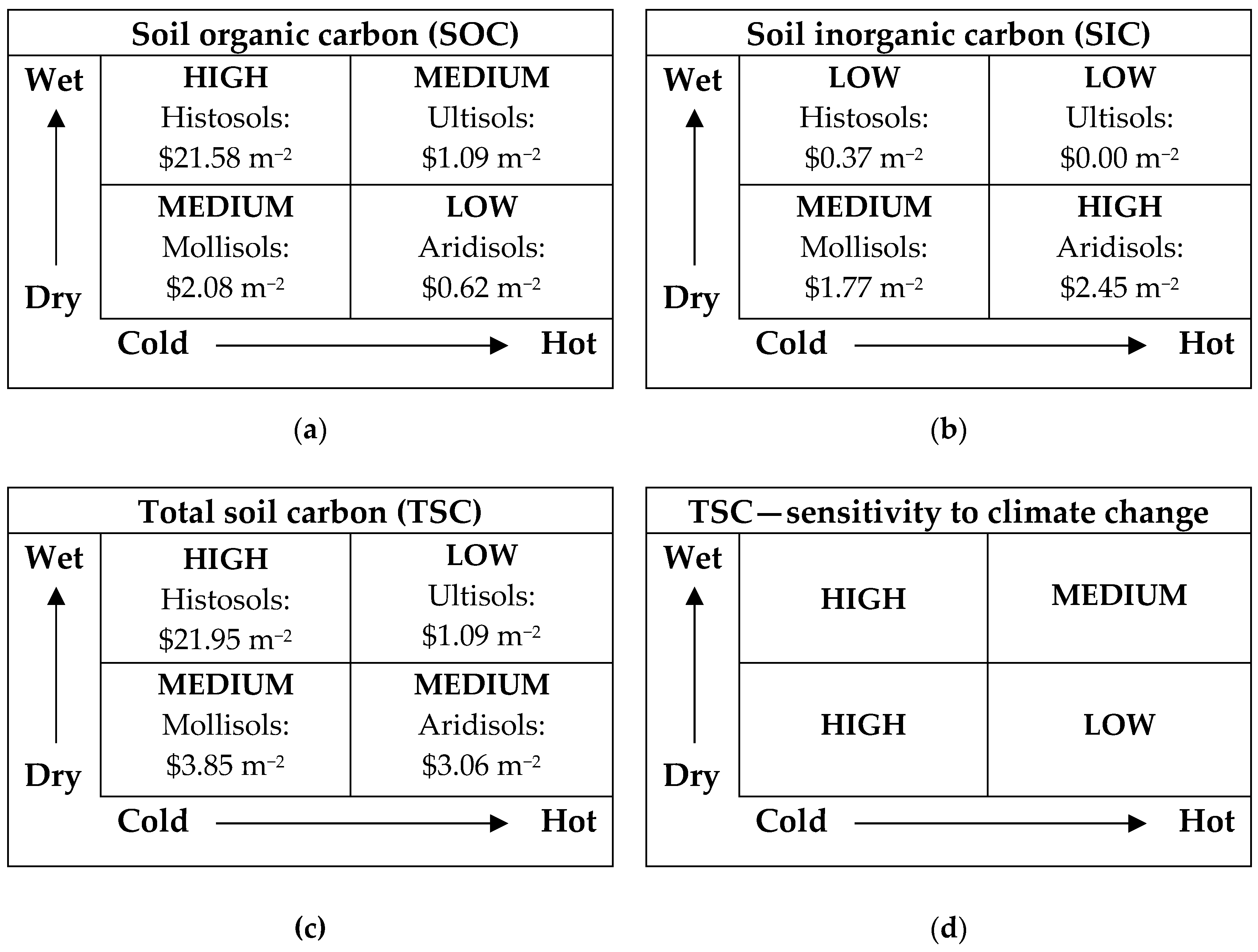