An Assessment of Airport Sustainability, Part 1—Waste Management at Copenhagen Airport
Next Article in Special Issue

Land Consolidation Associations and the Management of Territories in Harsh Italian Environments: A Review
Previous Article in Special Issue

Properties and Beneficial Uses of (Bio)Chars, with Special Attention to Products from Sewage Sludge Pyrolysis

Residual sludge disposal costs may constitute up to, and sometimes above, 50% of the total cost of operation of a Wastewater Treatment Plant (WWTP) and contribute approximately 40% of the total greenhouse gas (GHG) emissions associated with its operation. Traditionally, wastewater sludges are processed for: (a) reduction of total weight and volume to facilitate their transfer and subsequent treatments; (b) stabilization of contained organic material and destruction of pathogenic microorganisms, elimination of noxious odors, and reduction of putrefaction potential and, at an increasing degree; (c) value addition by developing economically viable recovery of energy and residual constituents. Among several other processes, pyrolysis of sludge biomass is being experimented with by some researchers. From the process, oil with composition not dissimilar to that of biodiesels, syngas, and a solid residue can be obtained. While the advantage of obtaining sludge-derived liquid and gaseous fuels is obvious to most, the solid residue from the process, or char (also indicated as biochar by many), may also have several useful, initially unexpected applications. Recently, the char fraction is getting attention from the scientific community due to its potential to improve agricultural soils’ productivity, remediate contaminated soils, and supposed, possible mitigation effects on climate change. This paper first discusses sludge-pyrolysis-derived char production fundamentals (including relationships between char, bio-oil, and syngas fractions in different process operating conditions, general char properties, and possible beneficial uses). Then, based on current authors’ experiments with microwave-assisted sludge pyrolysis aimed at maximization of liquid fuel extraction, evaluate specific produced char characteristics and production to define its properties and most appropriate beneficial use applications in this type of setting. View Full-Text
Keywords: wastewater sludge; pyrolysis; microwave-assisted pyrolysis; char; biochar; Pyrogenic Carbonaceous Material (PCM); biochar applications wastewater sludge; pyrolysis; microwave-assisted pyrolysis; char; biochar; Pyrogenic Carbonaceous Material (PCM); biochar applications
►▼ Show Figures 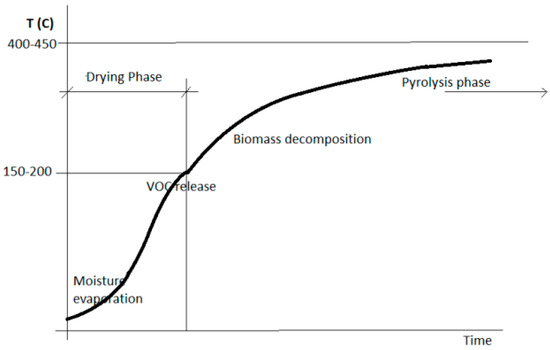