Waste Picker Organizations and Their Contribution to the Circular Economy: Two Case Studies from a Global South Perspective
Previous Article in Special Issue

Sources of Extraterrestrial Rare Earth Elements: To the Moon and Beyond

Approximately >50% of global rare earth element (REE) resources are hosted by carbonatite related deposits, of which monazite is one of the most important REE minerals. Monazite dominates more than 30 carbonatite-related REE deposits around the world, including currently exploited mineralization at Bayan Obo and Mount Weld. These deposits are widely distributed across all continents, except Antarctica. Though rare, monazite occurs as the primary mineral in carbonatite, and mostly presents as a secondary mineral that has a strong association with apatite. It can partially or completely replace thin or thick overgrowth apatite, depending on the availability of REE. Other mineral phases that usually crystallize together with monazite include barite, fluorite, xenotime, sulfide, and quartz in a carbonate matrix (e.g., dolomite, calcite). This review of monazite geochemistry within carbonatite-related REE deposits aims to provide information regarding the use of monazite as a geochemical indicator to track the formation history of the REE deposits and also supply additional information for the beneficiation of monazite. The chemical compositions of monazite are highly variable, and Ce-monazite is the dominant solid solution in carbonatite related deposits. Most monazite displays steep fractionation from La to Lu, absent of either Eu or Ce anomalies in the chondrite normalized REE plot. The other significant components are huttonite and cheratite. Some rare sulfur-bearing monazite is also identified with an SO3 content up to 4 wt %. A 147Sm/144Nd ratio with an average ~0.071 for monazite within carbonatite-related ores is similar to that of their host rocks (~0.065), and is the lowest among all types of REE deposits. Sm/Nd variation of monazite from a single complex reflects the differentiation stage of magma, which decreases from early to late. Based on the differences of Nd and Sr abundances, Nd isotopic composition for monazite can be used to track the magma source, whereas Sr isotopic composition records the signatures of the fluid source. Th-(U)-Pb age determination of the secondary monazite records variable thermal or metasomatic disturbances, and careful geochronological interpretation should be brought forward combined with other lines of evidence. ThO2 is the most difficult contamination in the beneficiation of monazite, luckily, the ThO2 content of monazite within carbonatite is generally low (<2 wt %). View Full-Text
Keywords: monazite; carbonatite; geochemistry; REE deposits monazite; carbonatite; geochemistry; REE deposits
►▼ Show Figures 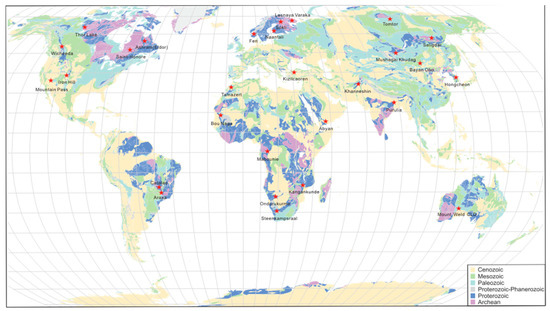