One of the significant organ systems which decline in aging is the kidney. While the causes of age-associated decline in renal function are likely multifactorial, oxidative stress and inflammation are hypothesized to play important roles in the structural and functional changes of the kidney. During aging there is a general decline in the glomerular filtration rate (GFR), a primary measurement used to assess kidney function. Inflammation and oxidative stress have been hypothesized to have a significant detrimental effect on renal function in aging and this may be attenuated by renal protective dietary ingredients. These dietary ingredients may affect renal function directly or through a microbiome-mediated secondary product. Likewise, structural changes including renal tubular atrophy, interstitial fibrosis, and glomerulosclerosis have all been described in aging. Such detrimental changes may benefit from dietary ingredients that may delay or attenuate the occurrence of such changes. This review will describe the physiology and pathophysiology of aging in renal function with an emphasis on dogs and cats that develop a decline in kidney function naturally. In addition, the varying biomarkers of health and renal dysfunction will be discussed. Finally, we will evaluate the aid in the management of this normal decline through dietary intervention in animal models. View Full-Text
Keywords: GFR; nephron; cytokines; SDMA; microbiome GFR; nephron; cytokines; SDMA; microbiome
►▼ Show Figures 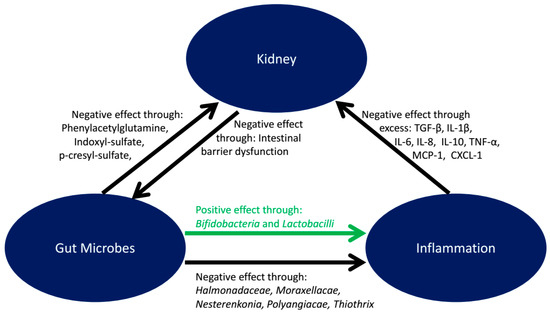 Panickar, K.S.; Jewell, D.E. The Benefit of Anti-Inflammatory and Renal-Protective Dietary Ingredients on the Biological Processes of Aging in the Kidney. Biology 2018, 7, 45.


Panickar KS, Jewell DE. The Benefit of Anti-Inflammatory and Renal-Protective Dietary Ingredients on the Biological Processes of Aging in the Kidney. Biology. 2018; 7(4):45.


Panickar, Kiran S.; Jewell, Dennis E. 2018. "The Benefit of Anti-Inflammatory and Renal-Protective Dietary Ingredients on the Biological Processes of Aging in the Kidney." Biology 7, no. 4: 45.