Cellular Localization and Trafficking of the Human ABCG1 Transporter

Christian A. Combs 3 and

Cholesterol plays critical roles in maintaining proper membrane structure and function through its interactions with other membrane lipids and proteins. Exquisitely complex cellular and systemic homeostatic mechanisms have evolved to maintain membrane cholesterol content within levels commensurate with normal function. Membrane cholesterol pools are in constant flux both within membranes and in transport between membranes.
A growing number of membrane proteins that reside at the plasma membrane, in late endocytic compartments, or both, have been found to play critical roles in intracellular cholesterol trafficking, including ABCA1 [1,2], ABCA3 [3,4], NPC1 [5], MLN64 [4], among others. These proteins mediate the transfer of cholesterol from a donor membrane to an acceptor membrane, or to soluble, non-membrane acceptor proteins. Little, however, is currently known about the mechanism(s) by which these proteins alter the disposition of cholesterol in donor membranes to make it available for removal. The ABCA1 transporter, one of the better characterized proteins that alters the distribution of membrane cholesterol, generates modified cholesterol and phospholipid-containing membrane domains that lipid-poor apolipoprotein acceptors such as apoA-I are competent to associate with, and then later dissociate from the cell, with concomitant removal of membrane lipids, thereby forming the nascent HDL particle [6,7].
Interest in ABCG1 began with the discovery that cholesterol as well as LXR agonists are transcriptional activators of the transporter [8,9]. Klucken et al. [10] first provided evidence for a possible role for ABCG1 in sterol efflux. We subsequently reported that ABCG1 resides on the cell surface as well as in late endosomes that shuttle back to the cell surface, and that ABCG1 mobilizes a pool of cholesterol on the cell surface that is distinctive from pools mobilized by ABCA1 [11]. Tall, Oram, Edwards and their respective colleagues subsequently showed that ABCG1 promotes efflux of cellular lipids to mature HDL as well as LDL, cyclodextrin and, liposomes [12,13,14].
The subcellular site(s) of ABCG1 functionality, however, remains controversial. Although many early reports using ABCG1 with a variety of tags expressed in cultured cells indicated that ABCG1 resides and functions at the PM [13,15,16], more recent studies by Edwards and colleagues have proposed an exclusive function for ABCG1 in endosomes [17]. Studies of ABCG1 KO mice revealed that ABCG1 functions in Type II pneumocytes in lamellar bodies, and in alveolar macrophage late endosomes [18]. However, the concept that ABCG1 functions at a single subcellular site is contradicted by the finding that ABCG1 exclusively localizes in pancreatic β-cell secretory granules where it functions to modulate secretory granule release, and further, was shown to play no role in cellular cholesterol efflux to extracellular acceptors in these cells [19].
We presently report that the function of human ABCG1 stably expressed in a HeLa cell line is not altered by the fusion of EGFP to the C-terminus of the transporter insofar as ABCG1-GFP enhances cellular cholesterol efflux to extracellular acceptors with a lipid surface, including HDL, LDL, and liposomes. Our studies reveal that ABCG1-mediated enhancement of cellular cholesterol efflux requires delivery of ABCG1 from its site of synthesis in the ER, to the plasma membrane and late endocytic compartments, and that ABCG1 rapidly cycles between endosomes and the cell surface. We further show that ABCG1 trapped in late endocytic compartments, in the absence of ABCG1 at the cell surface, can still enhance cellular cholesterol efflux. ABCG1 expression also increased the flux of both dextran and HDL through late endosomes/lysosomes, suggesting the possibility of a potential additional ABCG1-mediated cellular cholesterol efflux pathway involving HDL resecretion.

3.2. ABCG1 Resides on the Cell Surface and Late Endosomes 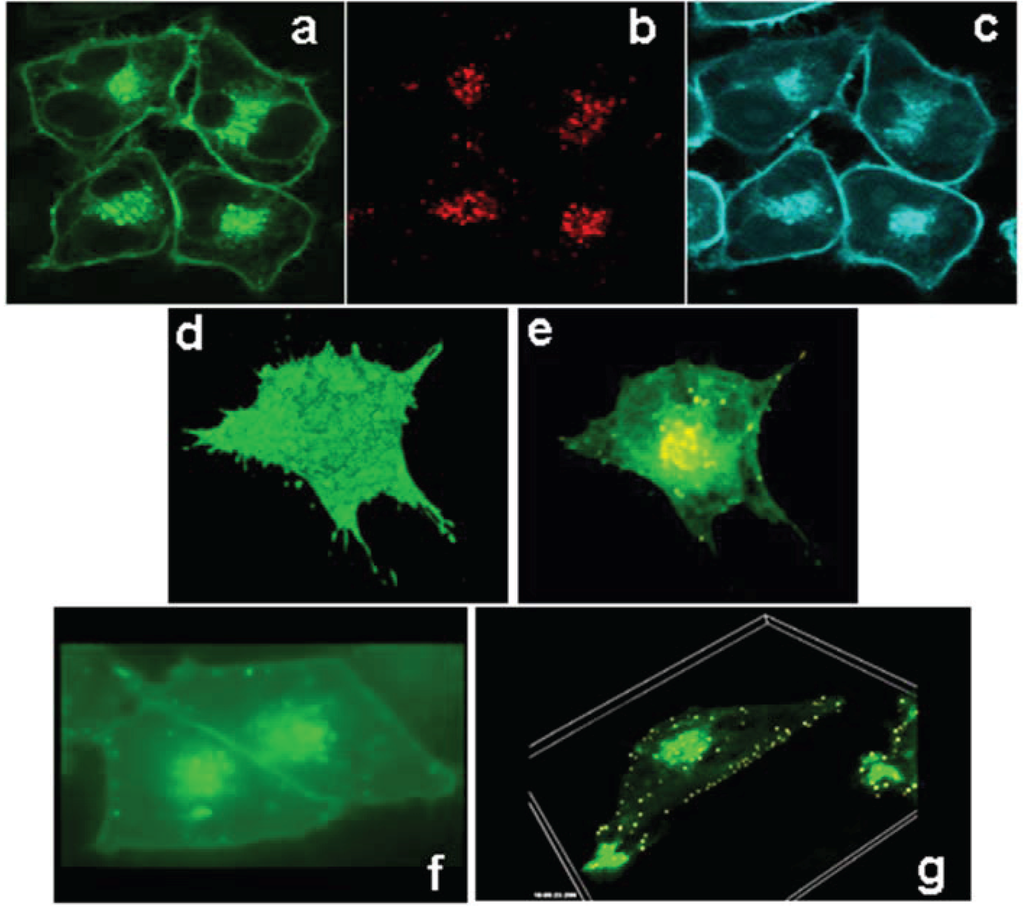 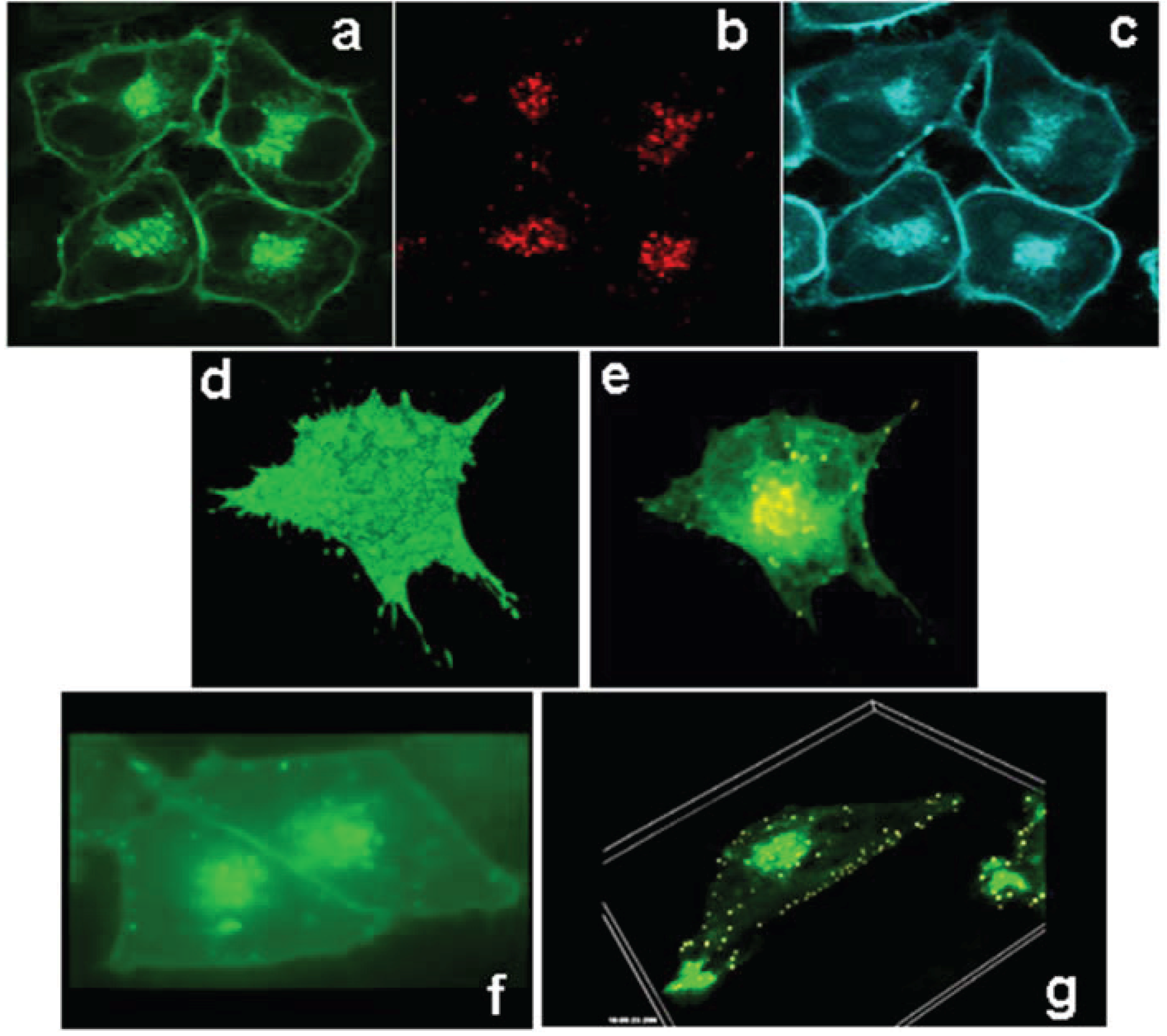 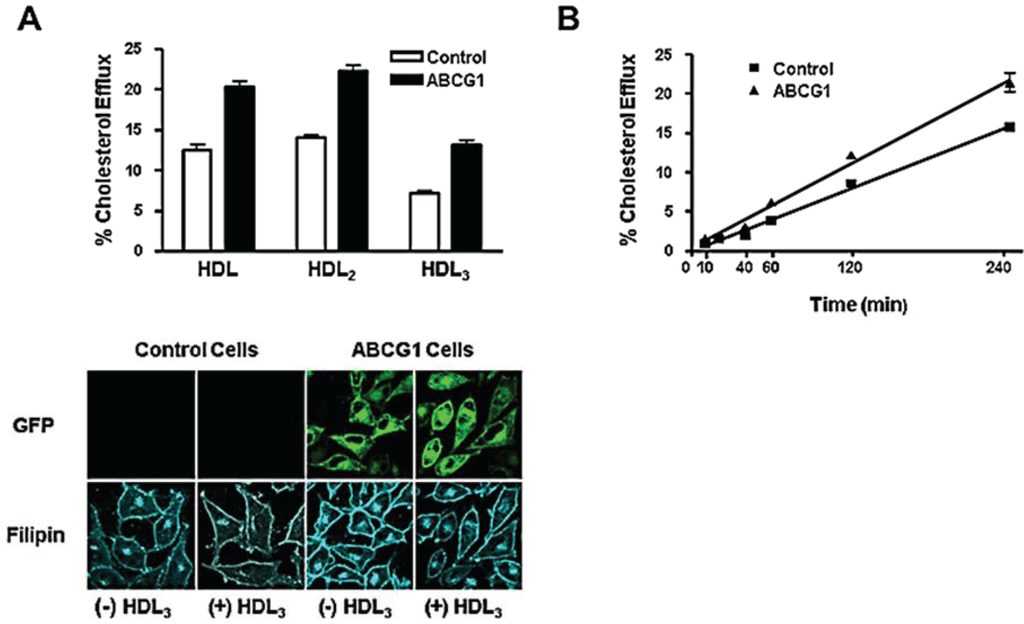 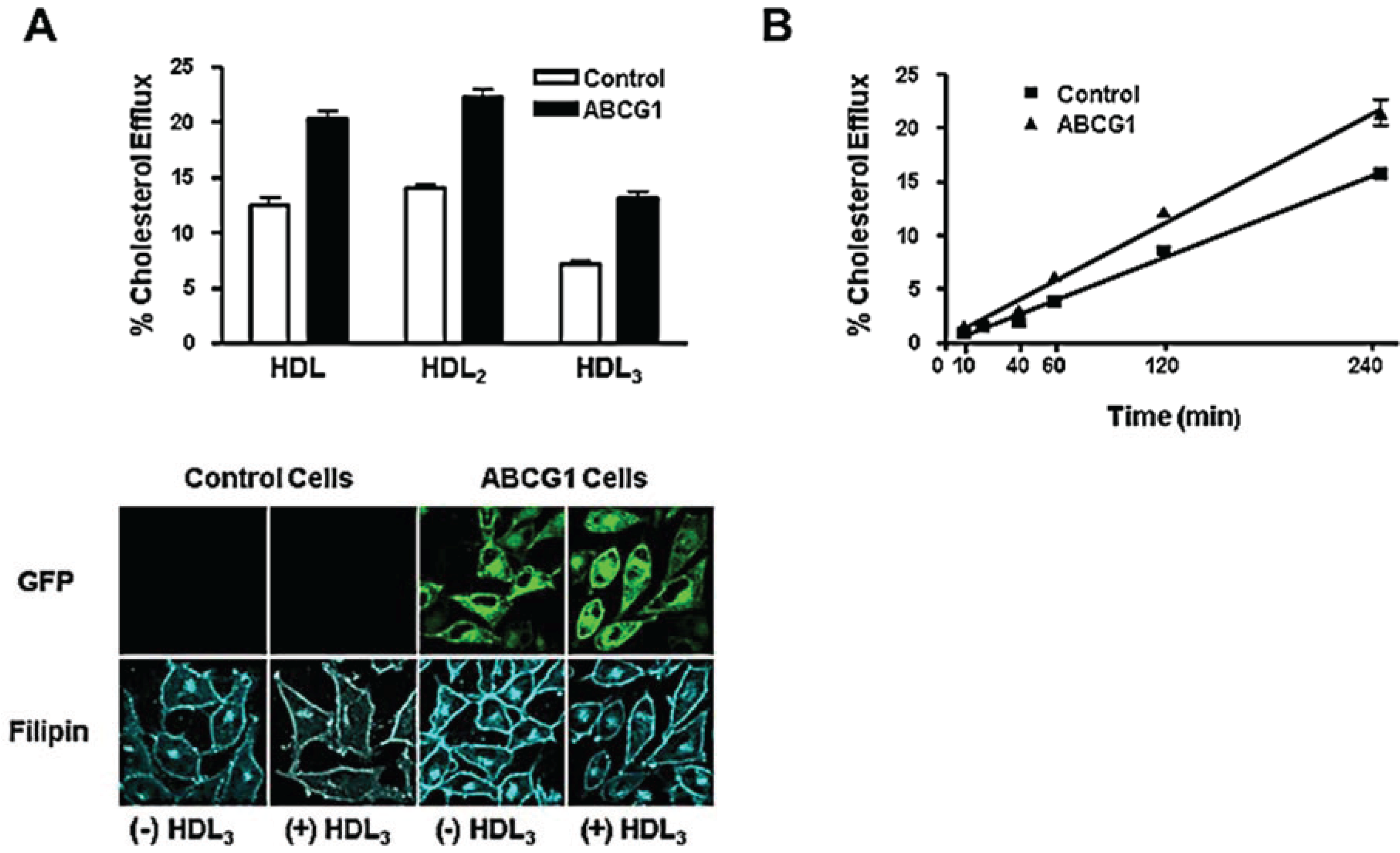 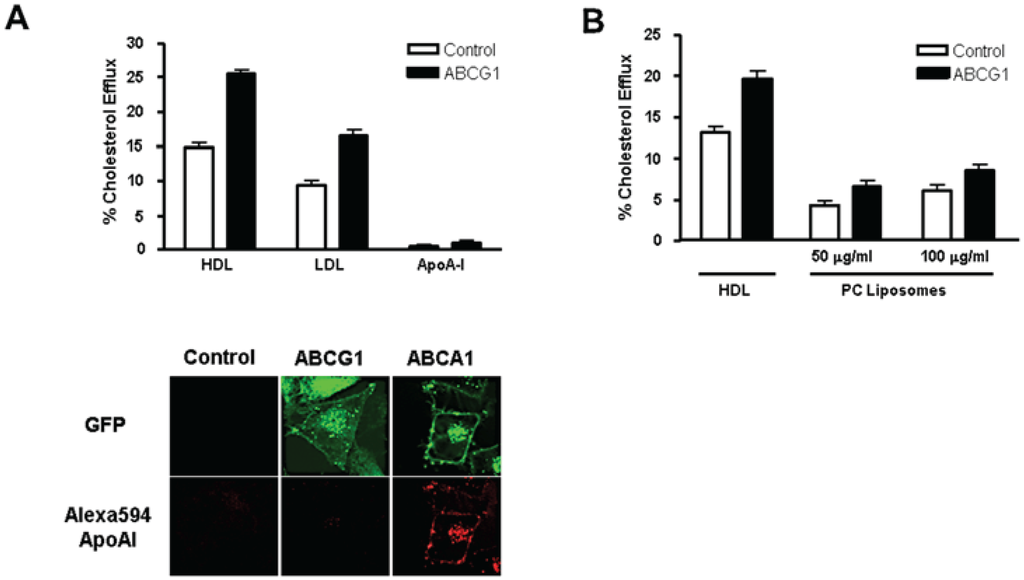 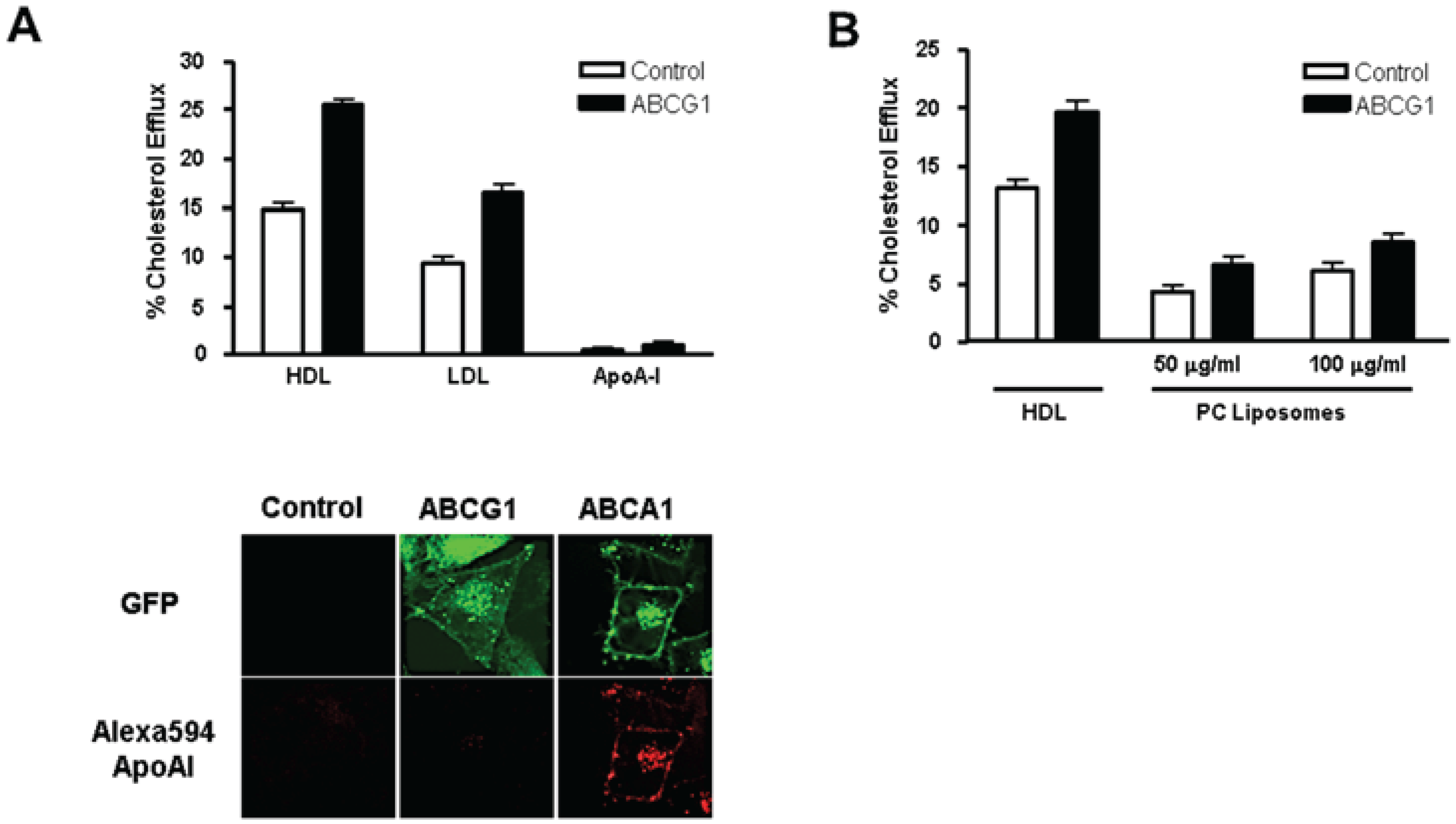 Efflux of cellular choline-containing phospholipids to HDL, HDL2, HDL3, LDL, and liposomes represented <1% of total cellular phospholipids and was not altered by ABCG1-GFP expression (Figure 5). Thus, ABCG1-mediated transfer of cell surface cholesterol to extracellular lipid-laden lipoprotein acceptor particles does not involve the mobilization of significant amounts of cellular phospholipid. Taken together, the results of these efflux studies suggest that ABCG1 generates a pool of cellular cholesterol at the cell surface that can transfer, without significant amounts of phospholipids, to extracellular acceptors with a lipid membrane surface.

To assess the trafficking of ABCG1 from the ER to the cell surface and late endosomes, cells were treated with cycloheximide (CHX) to block protein synthesis. As anticipated, CHX reduced cellular levels of ABCG1-GFP (Figure 6A). Interestingly, cellular ABCG1-GFP was notably decreased after 1–2 h, and was greatly reduced by 4 h. Based on densitometric analysis of the ABCG1 Western blot shown in Figure 6A, ABCG1 had an apparent t1/2 of ~3.3 h. Despite the reduction in total cellular levels of ABCG1, ABCG1-mediated cellular cholesterol efflux was unaltered by CHX (Figure 6B). Confocal microscopy revealed that after 1–2 h, CHX markedly reduced the abundant ER pool of cellular ABCG1, and concomitantly increased the pool of ABCG1 on the cell surface and in endosomes (Figure 6C). Even up to 4 h, ABCG1 was retained on the cell surface, albeit at markedly reduced levels. Surprisingly, some cells retained markedly high levels of ABCG1 at the PM (Figure 6C). These findings suggest that concomitant with the CHX-induced block in ABCG1-GFP synthesis, the pre-existing pool of ABCG1-GFP in the ER trafficked to the plasma membrane, and then, to late endosomes. This pool of ER-derived ABCG1-GFP trafficked to the cell surface, where it sustained enhanced cholesterol efflux to HDL (Figure 6B). Taken together, these findings suggest that ABCG1 functions at the cell surface and endosomes to promote the efflux of cellular cholesterol to HDL. 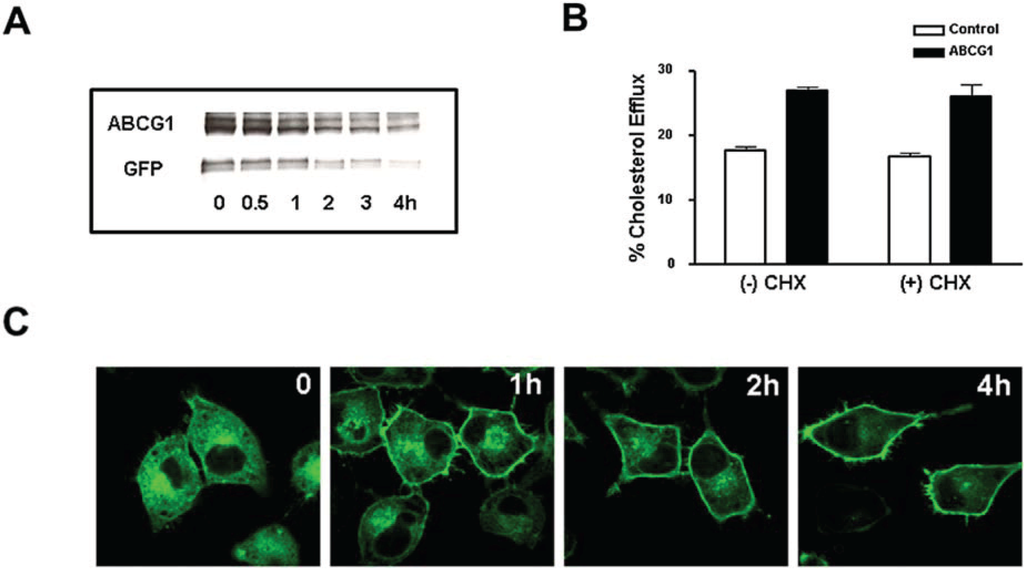 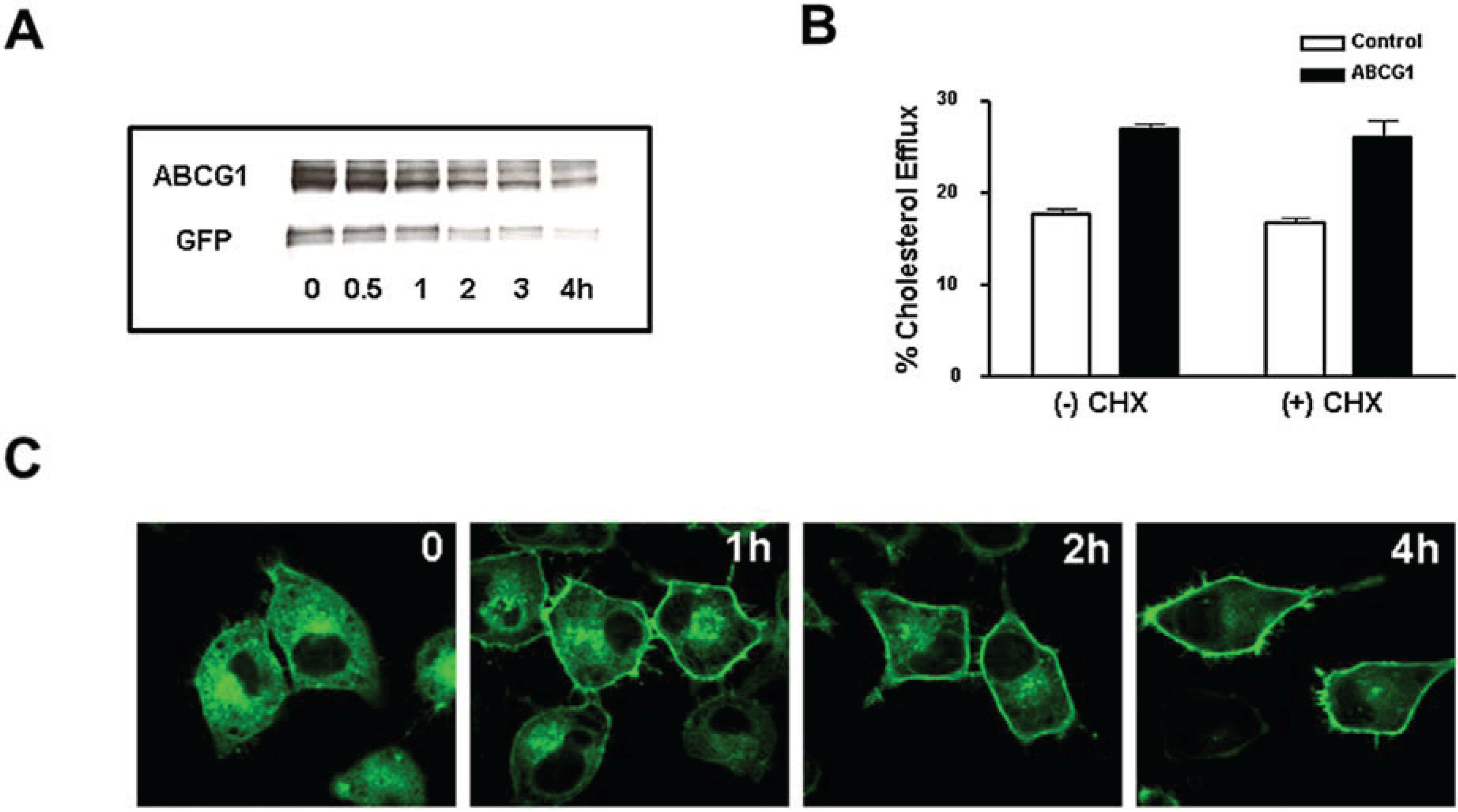 3.5. Brefeldin A and U18666A Block both Delivery of ABCG1-GFP to the Cell Surface and ABCG1-Mediated Cellular Cholesterol Efflux

Monensin [28], like brefeldin A, blocks delivery of newly-synthesized protein to the cell surface and thus would be expected to reduce surface expression of ABCG1-GFP, as well as possibly reduce HDL-mediated cholesterol efflux. In addition, monensin blocks protein degradation and trafficking out of late endosomes and lysosomes, and thus, is anticipated to cause PM-derived ABCG1-GFP to accumulate in late endosomes and lysosomes [28]. As shown in Figure 8A, monensin had little effect on total cellular ABCG1 protein levels. Surprisingly, monensin treatment of ABCG1 cells had little, if any, effect on HDL-mediated sterol efflux (Figure 8B). Monensin treatment markedly reduced ABCG1 at the cell surface, while markedly increasing the amount of ABCG1 in late endosomes/lysosomes marked with endocytosed Alexa594-dextran, as revealed by confocal microscopy (Figure 8C). Taken together, these results are consistent with a monensin-induced block in trafficking of newly-synthesized ABCG1-GFP from the Golgi to the cell surface, and accumulation of PM-derived ABCG1-GFP in late endocytic compartments. These findings suggest that ABCG1 trapped in late endocytic vesicles by monensin, unlike ABCG1 trapped in the ER by BFA, may play a role in mediating efflux of cellular cholesterol to extracellular HDL, and hence, the PM. Since monensin blocks vesicular trafficking out of late endosomes/lysosomes, it is possible that cellular cholesterol efflux in the presence of monensin represents movement of ABCG1-mobilized cholesterol from late endosomes/lysosomes to the PM by a non-vesicular-mediated pathway. Consistent with this notion, we previously reported that monensin traps PM-derived ABCA1 in late endosomes/lysosomes, and blocks ABCA1-mediated cellular cholesterol to apoA-I, by eliminating ABCA1 at the PM and by blocking retrograde vesicular trafficking required for the secretion of apoA-I potentially lipidated by ABCA1 in the lumen of late endosomes/lysosomes [1]. 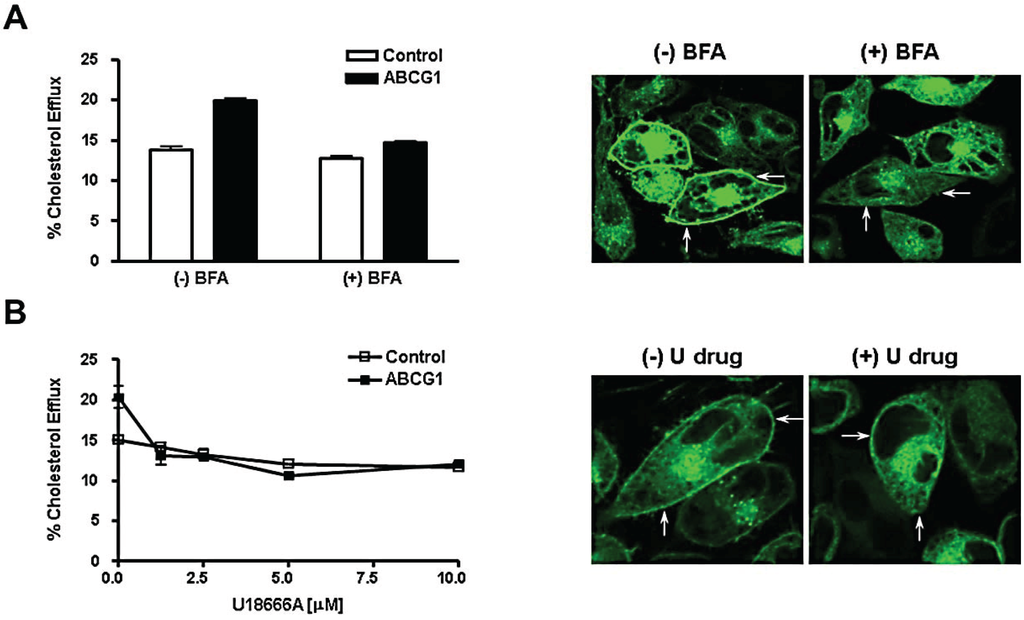 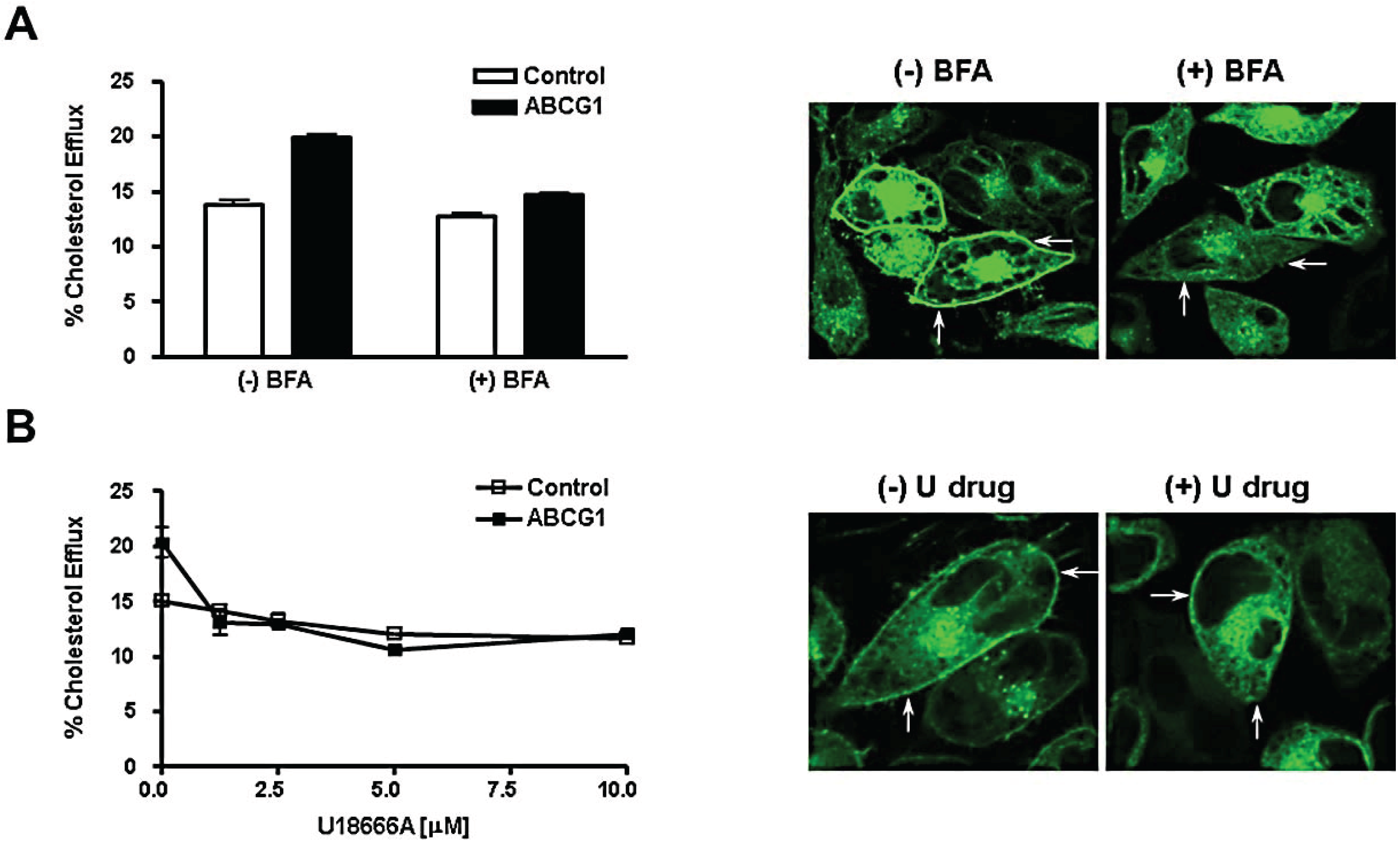 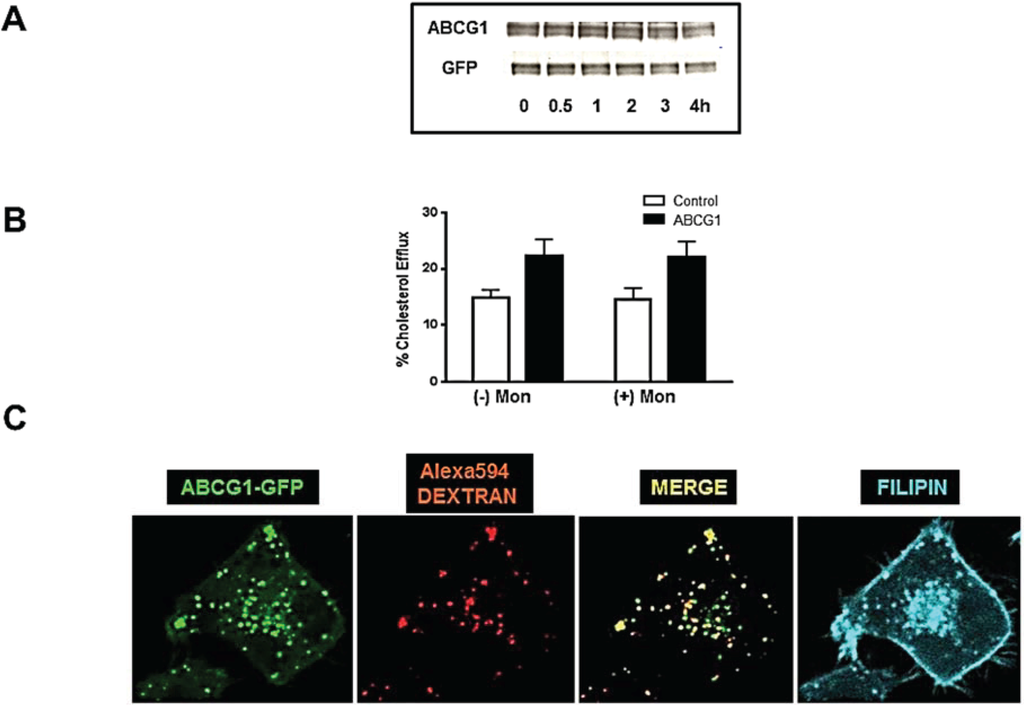 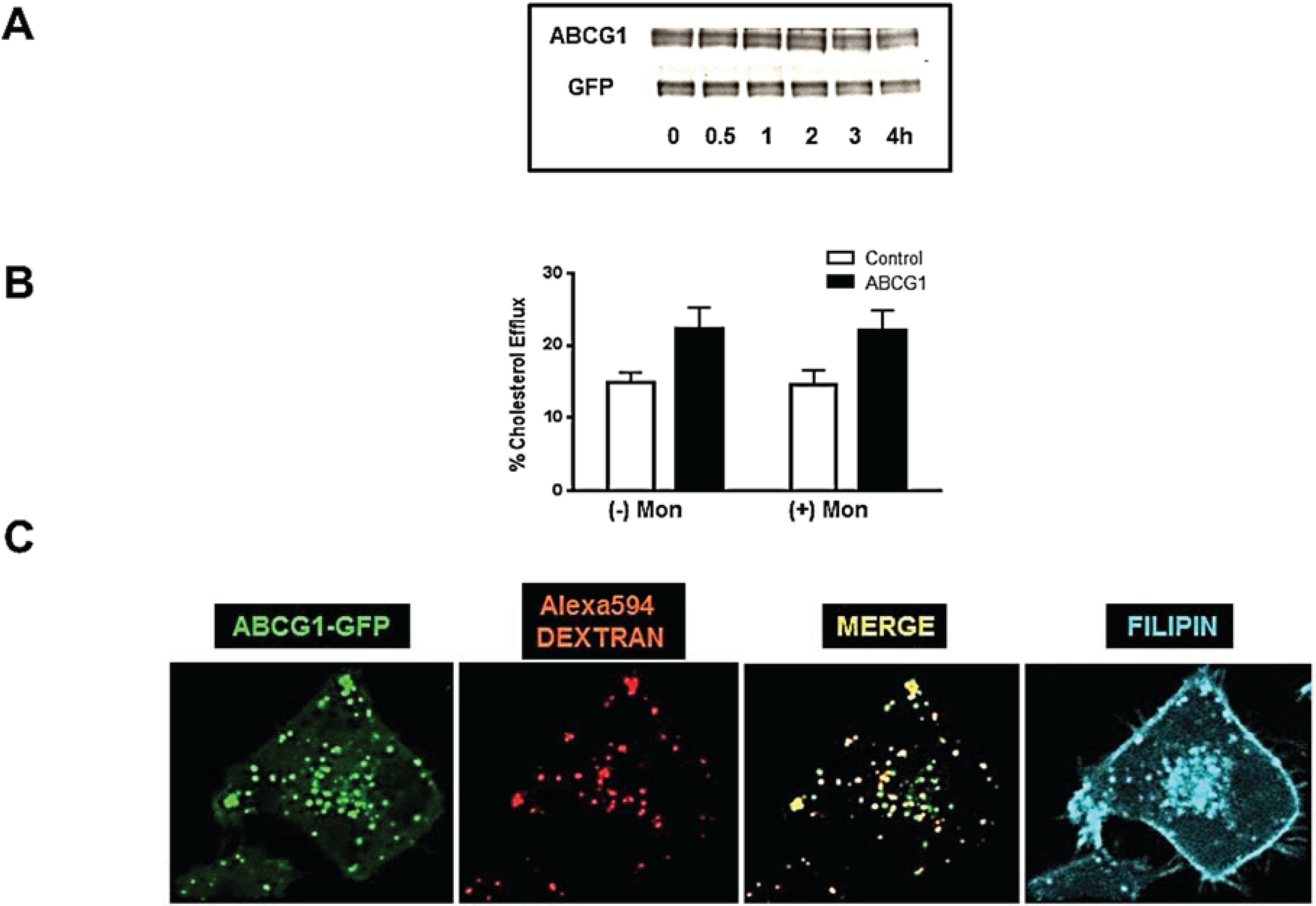 As noted earlier, endocytosed fluorescent dextran accumulates in ABCG1-containing late endocytic compartments (Figure 2b). As shown in Figure 9, ABCG1 cells exhibited a marked increase in uptake of both fluorescent dextran (Figure 9A) and Alexa 568-tagged HDL (Figure 9D) into ABCG1-containing perinuclear late endocytic vesicles (Figure 9B). We next tested the effect of sucrosome formation on HDL endocytosis. Sucrosomes are osmotically swollen late endosomes/lysosomes, formed after prolonged endocytic uptake of sucrose, that are unable to traffic PM-derived cargo to other destinations [29,30]. As shown in Figure 9C, sucrose treatment led to the formation of sucrosomes containing markedly increased levels of ABCG1. As shown in Figure 9D, entrapment of endocytosed fluorescent HDL in lysosomes in the presence of sucrose revealed a dramatic increase in accumulation of HDL in ABCG1 lysosomes compared to both non-sucrose-treated ABCG1 cells, as well as sucrose-treated control cells. This increased uptake in ABCG1 cells likely represents an increased rate of endocytic vesicle formation that may be a function of increased cholesterol content at the PM of ABCG1 cells. However, based on our studies, we cannot exclude the possibility that the increased retention of endocytosed fluid-phase markers in ABCG1-late endosome/lysosomes may in part reflect decreased clearance from late endosomes/lysosomes. The observed trafficking of endocytosed HDL in ABCG1 late endocytic vesicles raises the intriguing possibility that ABCG1 may promote intravesicular transfer of endosomal cholesterol to HDL, which may then efflux cholesterol from the cell upon HDL resecretion.

3.8. ABCG1-Mediated Cellular Cholesterol Efflux to HDL is Maintained When Cellular Sphingomyelin is Depleted

We have studied the cellular localization, trafficking and site(s) of function of the human ABCG1 transporter in a heterologous expression system consisting of a control parental HeLa cell line which lacks endogenous expression of ABCG1, and a HeLa cell line that stably expresses GFP-tagged ABCG1. The enhancement of cellular cholesterol efflux to HDL, HDL2, HDL3, or LDL by GFP-tagged ABCG1 was similar to that reported for non-tagged ABCG1 [12,13,14,32], thus establishing that fusion of GFP to the C-terminus of the transporter does not alter its functionality. ABCG1 expression increased both the size of the cholesterol pool available for efflux and the rate constant for efflux, as previously reported [25]. ABCG1-GFP did not enhance efflux of either cellular cholesterol or phospholipid to apoA-I, confirming that ABCG1 and ABCA1 mediate fundamentally different alterations in membrane lipid organization. ABCG1-GFP enhanced cellular cholesterol efflux to PC liposomes, demonstrating that a lipid surface is the minimal structural requirement for an acceptor of ABCG1-mobilized cellular cholesterol. 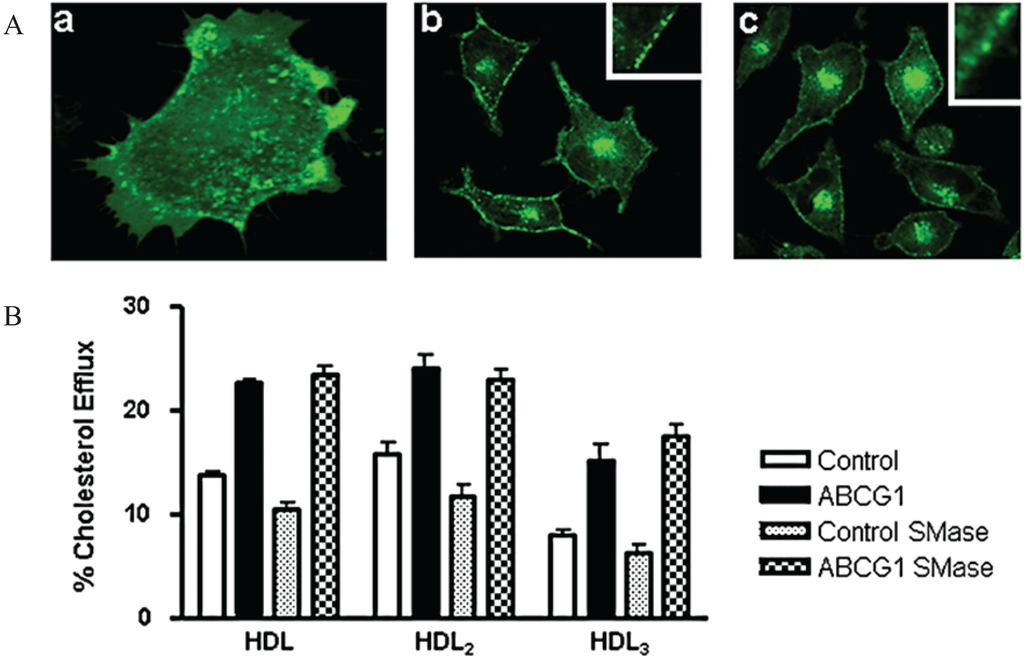 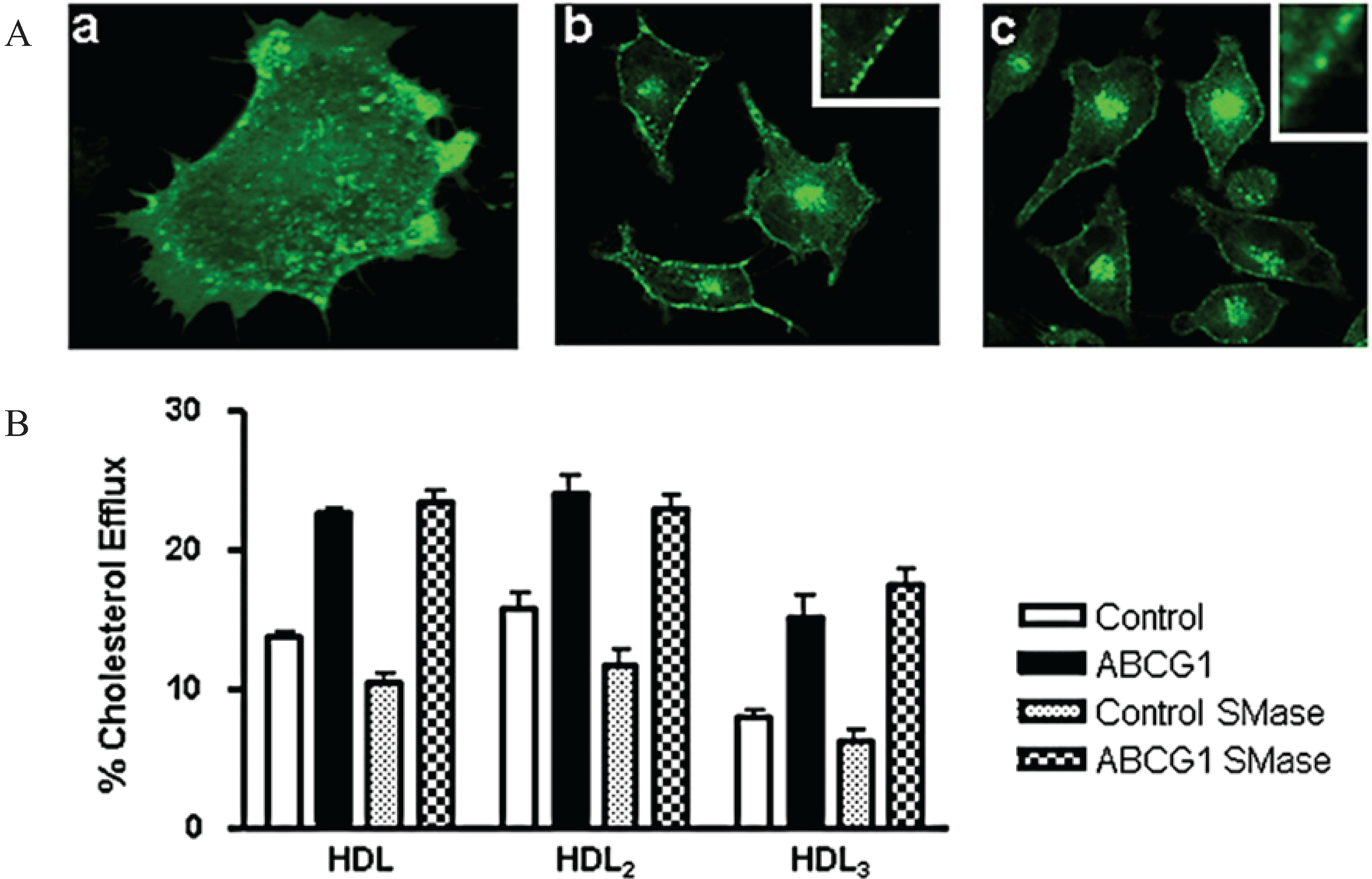 We wish to thank Steven Sabol for his help in the design of the ABCG1-GFP plasmid and Lita Freeman, Seth Thacker and Zhihong Yang for help with the preparation of the manuscript. This research was supported by the Intramural Research Program of the NIH, NHLBI.