MTBP and MYC: A Dynamic Duo in Proliferation, Cancer, and Aging

Dimerization of Firing Factors for Replication Origin Activation in Eukaryotes: A Crucial Process for Simultaneous Assembly of Bidirectional Replication Forks?

Controlling the activity of the heterohexameric Mcm2–7 replicative helicase is crucial for regulation of replication origin activity in eukaryotes. Because bidirectional replication forks are generated from every replication origin, when origins are licensed for replication in the first step of DNA replication, two inactive Mcm2–7 heterohexiameric complexes are loaded around double stranded DNA as a head-to-head double hexamer. The helicases are subsequently activated via a ‘firing’ reaction, in which the Mcm2–7 double hexamer is converted into two active helicase units, the CMG complex, by firing factors. Dimerization of firing factors may contribute to this process by allowing simultaneous activation of two sets of helicases and thus efficient assembly of bidirectional replication forks. An example of this is dimerization of the firing factor Sld3/Treslin/Ticrr via its binding partner, Sld7/MTBP. In organisms in which no Sld7 ortholog has been identified, such as the fission yeast Schizosaccharomyces pombe, Sld3 itself has a dimerization domain, and it has been suggested that this self-interaction is crucial for the firing reaction in this organism. Dimerization induces a conformational change in Sdl3 that appears to be critical for the firing reaction. Moreover, Mcm10 also seems to be regulated by self-interaction in yeasts. Although it is not yet clear to what extent dimerization of firing factors contributes to the firing reaction in eukaryotes, we discuss the possible roles of firing factor dimerization in simultaneous helicase activation. View Full-Text
Keywords: DNA replication; origin firing; bidirectional replication; Sld3/Treslin/Ticrr; Sld7/MTBP DNA replication; origin firing; bidirectional replication; Sld3/Treslin/Ticrr; Sld7/MTBP
►▼ Show Figures 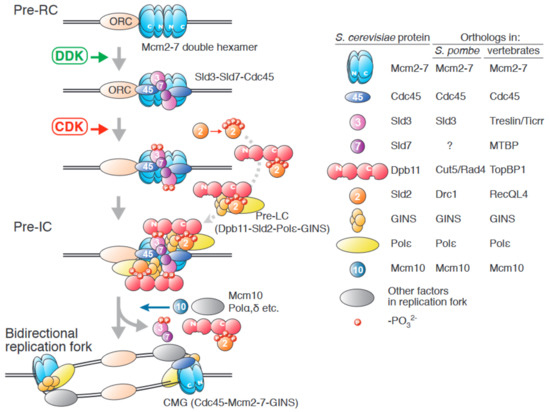