Decline in Running Performance in Highest-Level Soccer: Analysis of the UEFA Champions League Matches
Next Article in Special Issue

Effects of 6-Week Supplementation with GliSODin on Parameters of Muscle Damages, Metabolic, and Work Performance at International Level Rowers after Specific Maximal Effort

This brief report looks at the language used by The New York Times to report on human-shark interactions and whether they go beyond the phrase “shark attack”. “Shark attack” is a phrase that holds a powerful psychological position in the mind of the public and directs the way sharks are talked about in society. However, it raises concerns because the phrase “shark attack” tells a one-dimensional story of shark behavior, which is often misleading. Data shows that between 32–38% of reported shark “attacks” have no injury at all. As a result, scrutiny of media reporting on different types of human-shark interactions is important. This study found The New York Times still uses shark “attack” language but has begun to layer it with more scientifically accurate shark “bite” and “sighting” narratives that convey less sensational stories. This is part of a growing trend to incorporate a broader lexicon that explains that not every interaction with sharks’ results in injury or fatality.

The material and methods are reviewed by looking at the reasons for selecting the case study of The New York Times, the gathering of data, and operationalize the data.
The New York Times media reports were chosen as the unit of study because it is the recognized paper of record in the United States, and a leading publication of influence around the world. In addition, they are an authoritative publisher of stories replated to human–shark interactions, having published their first story in 1865, covering the 1916 shark disaster in New Jersey, and the summer of the shark in 2000.
New York Times articles were selected following a Factiva search that was refined based on the publication, publication date, and keywords. A total of 36 New York Times newspaper articles were selected from between 2012 and 2021 to provide a suitable period from the introduction of Neff and Hueter [14] to the present. Articles were gathered chronologically using Factiva software with the primary keyword being “shark attack” (n = 14). Secondary keywords were gathered from 36 articles and included “shark bite” (n = 12), shark “sighting” (n = 7) “incident” (n = 5), and shark “encounter” (n = 3). Keywords were selected consistent with other media analyses of human–shark interactions and were inclusive of headlines and article body text. Articles were filtered to ensure they are addressing human–shark interactions rather than loan sharks, Baby shark, card sharks, or the names of sports teams. Daily television listings with recaps were also removed. The number of incidents per 5-year average is 72, with 5–6 fatalities [17]. The average number of reported bites is greater than the number of New York Times articles on human–shark interactions each year; however, it is noteworthy that 2020 recorded the highest number of fatalities since 2013, see Table 1.
Data were looked at in context by printing out and reading each article. Headlines were noted as well as the article text. The discourse and lexicon of human–shark interactions includes: “incidents, shark bite, shark attack, shark sighting, and shark encounter”. Articles were examined for these key words. Proper nouns were included, such as the International Shark Attack File because they reinforce (perhaps more so than any quote or comment) the tolerance for the specific language. Random articles with the word “shark attack” were removed to establish the 10-year core articles. Results were double-checked to ensure inter-coder reliability by a research student.

In a review of 36 New York Times articles on human shark interactions across 10 years (2012–2021) there were several findings. Data (descriptor mentions) were analyzed and separated for content analysis based on the way they highlighted different discourse usage.

(1)
“Shark attack” or “attack” appeared in the headline in 11 of 36 articles (30%). One article (Barnard, 2021) had “shark sighting” in the headline [14]. No articles had shark “bite” in the headline. Each article examined was written by a different author.
(2)
In Figure 3, shark “attack” and shark “bite” mentions are compared and highlight a potential shift in reporting style at The New York Times that provides new emphasis on shark “bite” as a descriptor for human-shark interactions since 2018.
(3)
In Figure 4, all keywords (bite, attack, sighting, incident, encounter) were compared by year. The data show that all The New York Times articles on human–shark interactions that mentioned shark “attacks” in 2021 (n = 5) and 2020 (n = 3) also mentioned shark “bites”. This was also the case in 2018 (n = 3).
(4)
There were nearly three times the number of mentions of shark “bite” in 2021 (n = 34) as there were in 2018 (n = 13), see Figure 5. This data also suggests an increase in “shark bite” descriptor usage at The New York Times since 2018.
(5)
Shark “sighting” is the third most common phrase to be mentioned in New York Times articles in 2021 (n = 7 mentions) and 2020 (n = 4 mentions).
(6)
Overall, while shark “bite” mentions have increased, the data highlight that individual mentions of shark “attack” per year at The New York Times still constitute the most prevalent language selection in reporting on human-shark interactions in 2021 (n = 51). Indeed, two articles in 2021 in particular account for some of the rise in shark “bite” descriptors with (n = 12 mentions) and (n = 16 mentions), respectively. 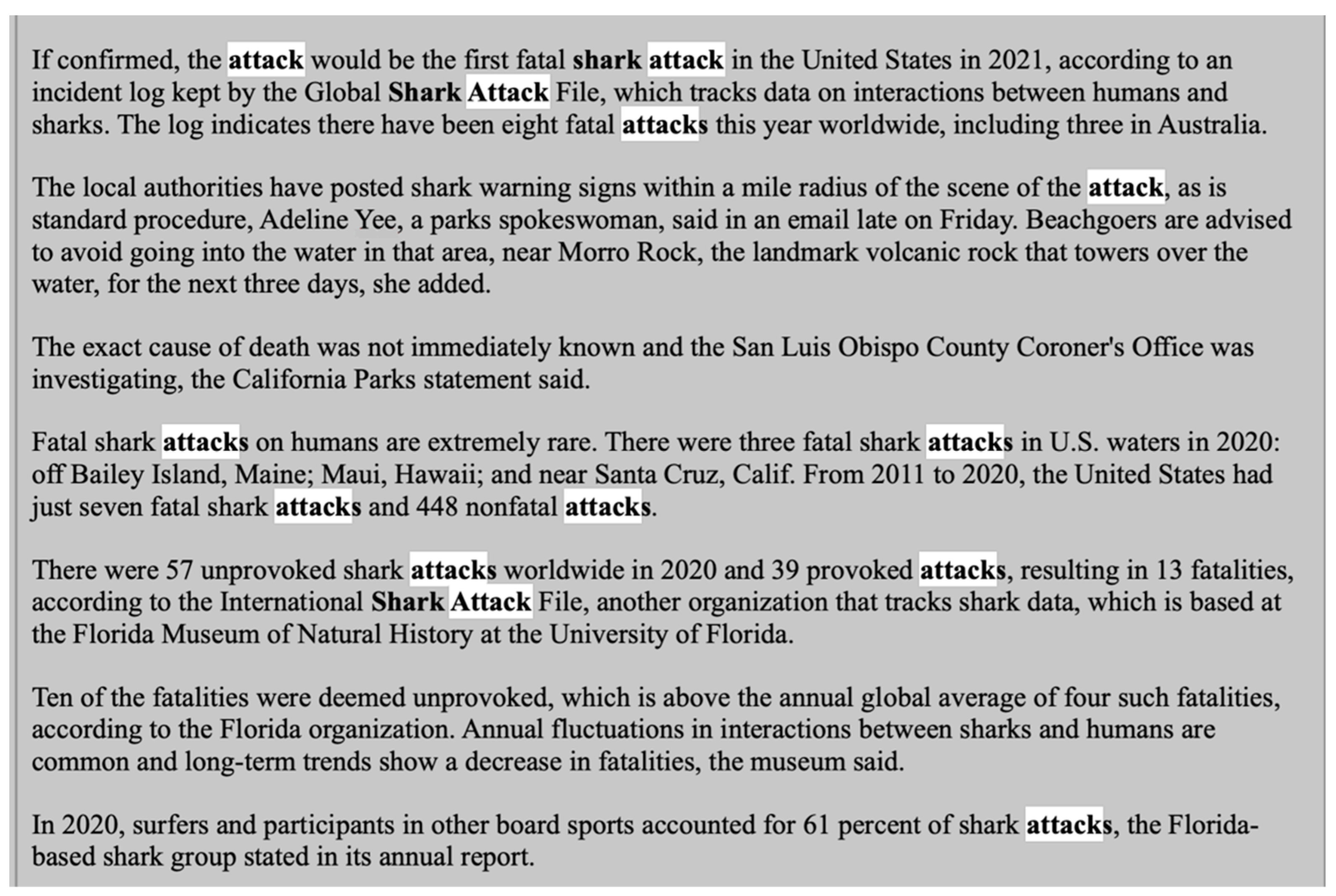 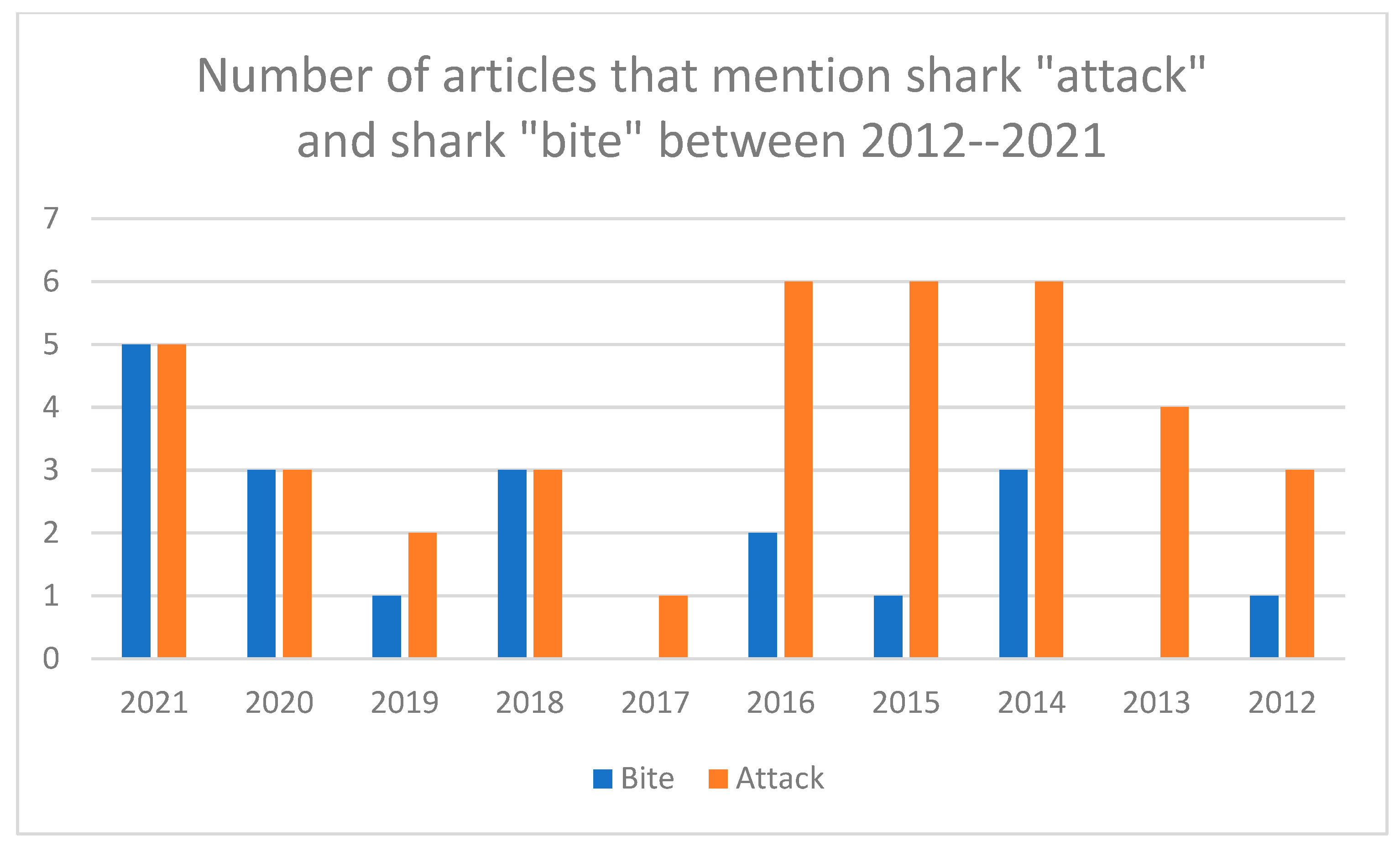 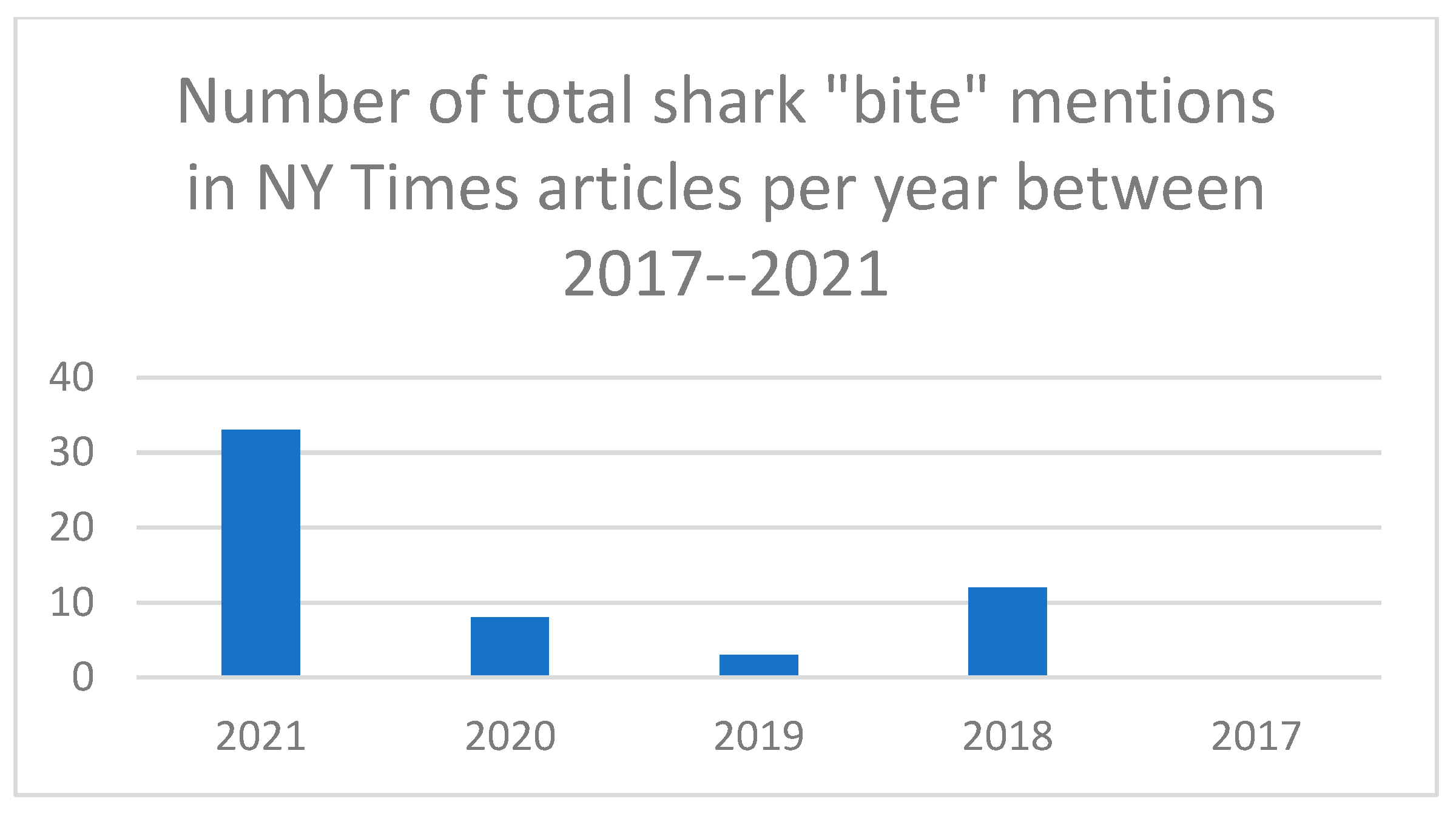 The preliminary results suggest two types of responses over the 10-year period between 2012 and 2021. The first is based on the nature of individual occurrences and may reflect an individual reporter’s discursive preferences (between 2012–2017). The second; however, points an institutional response that is more layered and suggests a change in reporting style at The New York Times regarding human–shark interactions (since 2018).
The data indicates an increased use of varied discourse in recent years including shark “bites, attack, incident, sighting and encounter”. These terms represent a new approach by the media toward a layered reporting on human–shark interaction. This data can be interpreted from the perspective of previous studies on media relations and sharks [12,13,14,15]. I find that The New York Times is diversifying their discourse around human–shark interactions and that this is consistent with a growing international trend away from the singular adoption of “shark attack” as an applied phrase. The implications of this research highlight the importance of a varied lexicon and vocabulary to represent the multi-dimensional nature of human–shark interactions. Future research should examine broader trends in media reporting, particularly as scientific bodies focus on the Associated Press’ Style Guide as another media industry standard.
The adoption of a layering approach to media reporting on human–shark interactions would mark the end of the cultural monopoly of “shark attack” language utilization as a catch-all term. Shark “attack” is a one-dimensional representation that assumes knowledge of shark behavioral intent, sensationalizes human–shark interactions, provides a blanket label that assumes all sharks are dangerous, can be used politically to undermine shark conservation [25] and fails to scientifically represent the variety of possible experiences that people can have with sharks. The implications of this specific phrase’s use include harm to human populations because the nature of the risk posed by sharks is misrepresented and leads to a fundamental misunderstanding of sharks. If the public knew that nearly 40% of reported shark “attacks” had no injury this could change a building block of marine science education [18]. More varied text in media portrayals illustrates the variety of different types of human–shark interactions that are important to public communication and risk mitigation.
In all, human–shark interaction research is a growing area of marine social science. This article illustrates just one aspect of how human–shark interactions has become a growing interdisciplinary sub-field of human–shark relations within marine social science [26]. This emerging sub-field looking at human–shark relations relative to marine biology [27], geography [28], political science [29], conservation, film studies [30], communications [31]. This article contributes to a demonstrated “shark turn” in social science research. Further research is needed, but this study suggests that that there is evidence to support an emerging trend in diversified descriptions regarding the collection and reporting on human–shark interactions at a key media outlet.

The question driving this brief report asked to what extent media reporting by The New York Times engages beyond the lexicon of “shark attack” discourse to describe human–shark interactions. I found that there has been an increase in diversified language used in reports about human–shark interactions at The New York Times, including shark bites, attack, encounters, sightings, and incidents since 2020.
Additionally, “shark attack” discourse has a powerful influence on fear toward sharks by telling a story about a creature that intentionally eats humans, rather than a fish that accidentally or mistakenly bites people on exceptionally rare occasions. Finally, it is useful to note that the Neff and Hueter (2013) typology is applicable more broadly and could be used for other animal encounters, both water-based and terrestrial.

Data supporting reported results can be obtained for free by emailing the author at [email protected].

The author wishes to thank the anonymous reviewers for their feedback. Special thanks as well to Ben Ormerod for their research assistance.