Changes in Transcriptomic Profiles in Different Reproductive Periods in Yaks

The magnitude, distribution, and characteristics of the electric field induced in the brain by application of transcranial electric stimulation depend on the electrode configuration used and the specific parameters of stimulation. An approach to calculate the generated electric field is the computational finite element method. This method enables simulation of the current spread and electric field strength according to the electrode configuration and stimulation parameters used. However, current approaches have several limitations, which constrain the application of tDCS in empirical research and clinical practice. In this study, we provide examples of standard model-based electric field simulations corresponding to motor, dorsolateral prefrontal, and posterior parietal cortex stimulation using twenty typical electrode configurations. Two different current flow-modeling tools were used to compare the results and determine possible differences between both procedures regarding the specificity, as well as the reliability of the estimates. The results were rather consistent between both simulations. Some modest differences of the simulated distribution and intensity of the electric fields between the results of the respective modeling approaches were identified, which might have functional significance and reveal the need to empirically validate these models. The non-availability of quantitative data about the precise electric field distribution beyond the cortical target is a common limitation of both methods, which limits the determination of the spatial specificity of the intervention. These findings help to define future directions of research that allow to exploit the full potential of standard simulation approaches in the field of non-invasive brain stimulation.

Transcranial direct current stimulation (tDCS) is a non-invasive brain stimulation procedure to modulate cortical excitability and related brain functions. tDCS can effectively alter multiple brain functions in healthy humans and is suggested as a therapeutic tool in several neurological and psychiatric diseases. However, variability of results is an important limitation of this method. This variability may be due to multiple factors, including age, head and brain anatomy (including skull, skin, CSF and meninges), cognitive reserve and baseline performance level, specific task demands, as well as comorbidities in clinical settings. Different electrode montages are a further source of variability between tDCS studies. A procedure to estimate the electric field generated by specific tDCS electrode configurations, which can be helpful to adapt stimulation protocols, is the computational finite element method. This approach is useful to provide a priori modeling of the current spread and electric field intensity that will be generated according to the implemented electrode montage. Here, we present standard, non-personalized model-based electric field simulations for motor, dorsolateral prefrontal, and posterior parietal cortex stimulation according to twenty typical tDCS electrode configurations using two different current flow modeling software packages. The resulting simulated maximum intensity of the electric field, focality, and current spread were similar, but not identical, between models. The advantages and limitations of both mathematical simulations of the electric field are presented and discussed systematically, including aspects that, at present, prevent more widespread application of respective simulation approaches in the field of non-invasive brain stimulation.
Keywords: current flow; current intensity; electric field; finite element method; tDCS current flow; current intensity; electric field; finite element method; tDCS

In the last two decades, a growing number of publications have provided evidence for the potential of transcranial electric stimulation (tES) techniques to modulate cortical excitability and underlying brain functions [1,2]. Transcranial direct current stimulation (tDCS) is the most often used tES variant, and the neurophysiological and functional effects of this technique have been carefully investigated [3,4,5,6,7,8]. Conventional [9,10,11] and recently introduced multi-electrode tDCS approaches [12] have been shown to be safe and effective methods to alter cognitive functions in healthy humans. Likewise, tDCS has moderate beneficial effects in several clinical conditions, with minimal side effects, both in adults [13,14] and children [15]. Moreover, the application of weak currents by tDCS is an inexpensive and easy-to-use procedure for clinicians and expert neuroscientists, compared to other non-invasive brain stimulation approaches. All these characteristics make tDCS a valuable tool to explore and alter brain functions, as well as a promising therapeutic application in a wide range of neurological and psychiatric symptoms [16,17,18,19].
A drawback of tDCS effects is its outcome variability [20,21], a feature that it shares with other neuromodulatory brain stimulation techniques. Response variability of tDCS depends on multifold individual and life conditions [22]. Main factors that determine inter-individual variability of tDCS effects include anatomical differences of the head and brain between subjects [23]. Indeed, the resistance of the skull, skin, cerebrospinal fluid (CSF), and meninges determines electrical conductance, and thus the amount of current applied to the skin entering the brain [24,25,26,27,28,29,30]. Besides, the international 10/20 EEG system is a common procedure used for tDCS electrode placement, and notable anatomical differences may compromise cortical correspondence with this standard system. Different electrode configurations used to modulate specific brain targets are also a source of heterogeneity of tDCS results [31], and the intensity of the electric field induced in each case is a key factor determining these differences. Thus, gaining information about the electric field intensity in the brain, as well as current spread and electric field directionality, resulting from specific tDCS electrode montages and applied current intensities is useful to optimize doses and electrode configurations in tDCS studies.
A method to calculate and simulate the intensity and directionality of the electric field, current density and spread induced in the brain by tDCS is the finite element model, which is based on magnetic resonance imaging (MRI) data to build anatomically realistic head models [32,33]. Several software packages have used this computational method to provide electric field modeling in standardized or individual brain models based on specific stimulation parameters (electrode size, shape, and location, polarity—anode/cathode—over the cortical target, and current intensity measured in mA) [34,35]. This approach is used to predict and analyze the electric field resulting from specific tDCS electrode configurations and, thus, to decide for the optimal protocol in terms of appropriate electric field strengths for the intended brain target, and sufficient specificity of stimulation [36,37,38]. In modeling tools based on standard head models, which use standard conductivity values, electrode sizes, electrode positions, and current intensity can be adjusted to achieve the targeted electric fields in the brain, which can be helpful to determine optimal stimulation parameters. The predicted electric field strengths could furthermore serve as a reference to minimize between-study variability [39,40,41,42,43]. Physical and physiological empirical validation of the predicted electric fields, including the transfer of these predictions to functional and physiological effects of tDCS [44,45], requires, however, further research.
Considering this background, an area to be explored is the comparison of available standard modeling approaches to analyze the resulting electric field intensities and distributions when default values for respective simulations are taken, and thus to evaluate the predictive potential of these methods. Therefore, the objective of this work is to provide simulations of the electric field induced by twenty typical tDCS electrode configurations using two different current flow modeling tools based on standard head models. We explored simulations of tDCS targeted to three brain regions and compared the results gained by these tools. Respective model-based adjustments of stimulation protocols might be helpful to determine electrode configurations in future tDCS studies. This includes determination of the maximum intensity of the electric field generated in the region of interest (ROI) for each electrode configuration (as explored here for the primary motor cortex—M1, dorsolateral prefrontal cortex—DLPFC, and posterior parietal cortex—PPC), as well as the distribution of the electric field dependent on electrode position and size, and current intensity. These data provide a priori information about predicted electric field strengths and characteristics, and are a relevant example how to define tDCS electrode configurations for empirical studies. The consistency or inconsistency of the results obtained by both modeling approaches will furthermore help to make assumptions about the level of reliability of these approaches in general, and the need for further empirical validation to exploit their full potential in basic research and clinical domains in future. In short, the simulations provided in this study are practical examples delivering a foundation for discussing the state-of-the-art, to analyze important shortcomings, and develop future research directions.

We provide examples about how current flow can be calculated using two different modeling tools for tDCS configurations varying with respect to electrode positions, current intensity, and electrode sizes. Based on this approach, we discussed advantages and limitations of those simulations in which individual MRI is not required, with respect to basic experimental research and clinical applications. We furthermore discuss future perspectives of electric field simulations of non-invasive brain stimulation.
The general outcomes of the simulation procedures were relatively similar between models, although higher values of the maximum intensity of the electric field were generally obtained by COMETS modeling. Less focality and extended current spread were observed when the electric field was simulated by SimNIBS, particularly with those configurations in which the anode electrode was positioned over the PPC region. Between-model differences were thus apparent for quantitative measures of electric field intensity and qualitative overviews of the electric field distribution. However, it can be concluded that, in general, both simulation approaches deliver roughly comparable results for a standard head model. Unresolved issues of these modeling approaches are the limited physical and physiological validation of simulations, and the transfer of results to behavioral and clinical levels. These shortcomings do currently prevent the application of modeling for routine clinical applications, which would be however a principally important field for personalization of therapeutic neuromodulation in neuropsychiatric disorders to reduce interindividual variability of results [16,112]. A one-to-one translation from simulated electric fields to brain physiology is not currently feasible, given neuronal direction-sensitive effects and non-linear effects of stimulation, among other uncontrolled factors, although some physiological effects can be predicted based on modeling that use individual physical measures [28]. To control these factors in simulation to a larger degree, validated models at the microscale and physiological levels would be necessary. Currently available modeling procedures supply, however, also in case of simple, non-personalized approaches, valuable information for the development of tES studies, by providing a general overview of electric field characteristics.

Michael A. Nitsche receives support from the German Ministry of Research and Education (GCBS grant 01EE1403C), and EU (NEUROTWIN, grant No 101017716), and is a member of the scientific advisory boards of Neuroelectrics, and NeuroDevice. The other authors declare no conflict of interest. 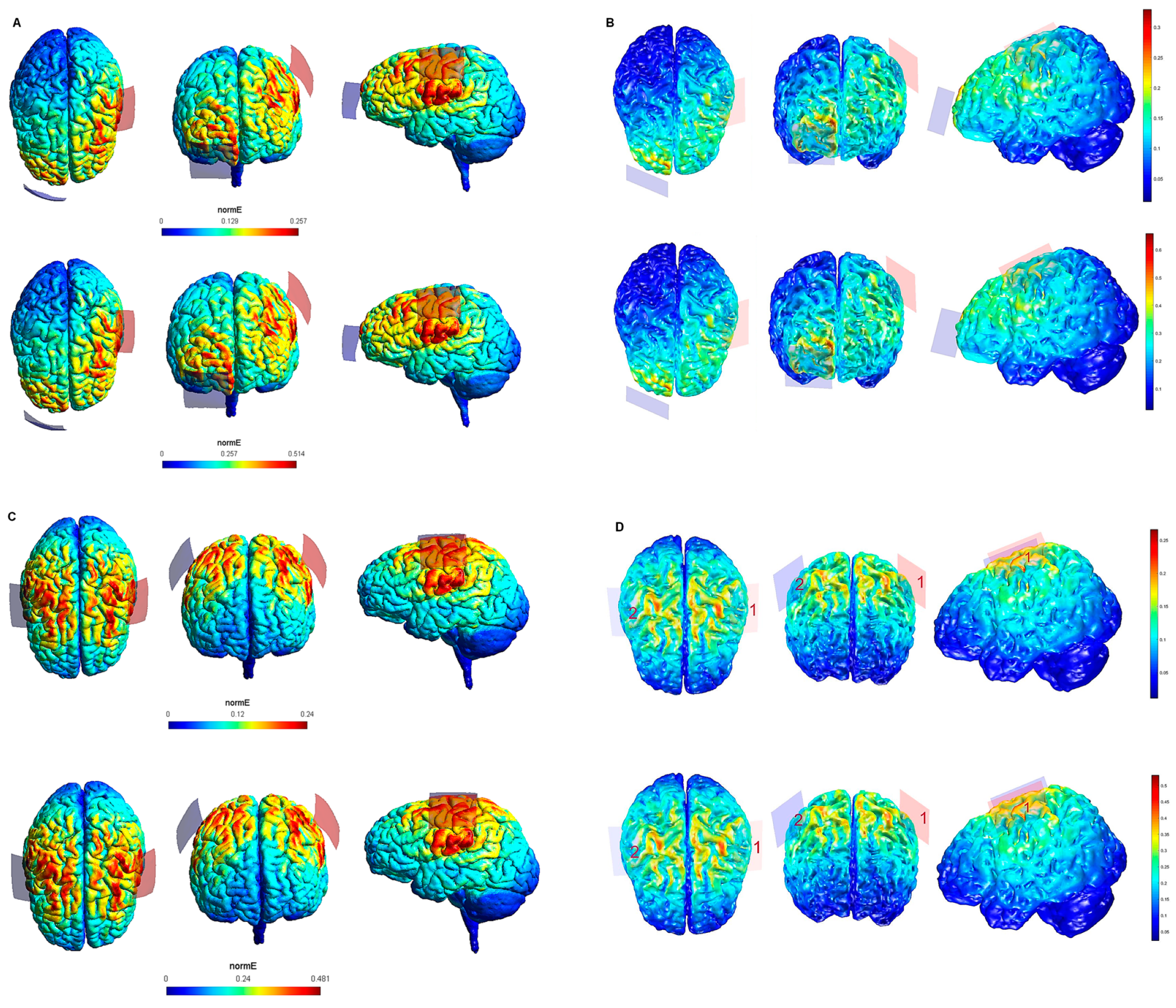 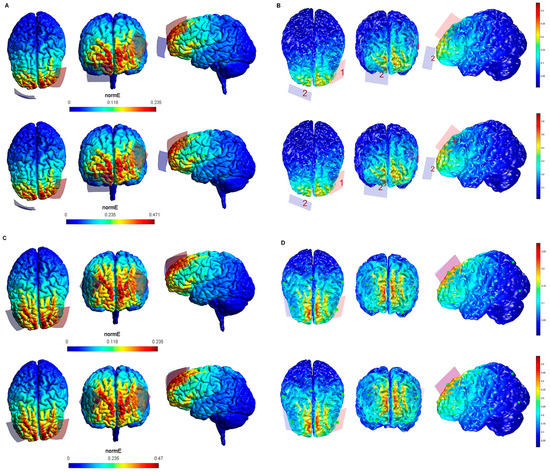 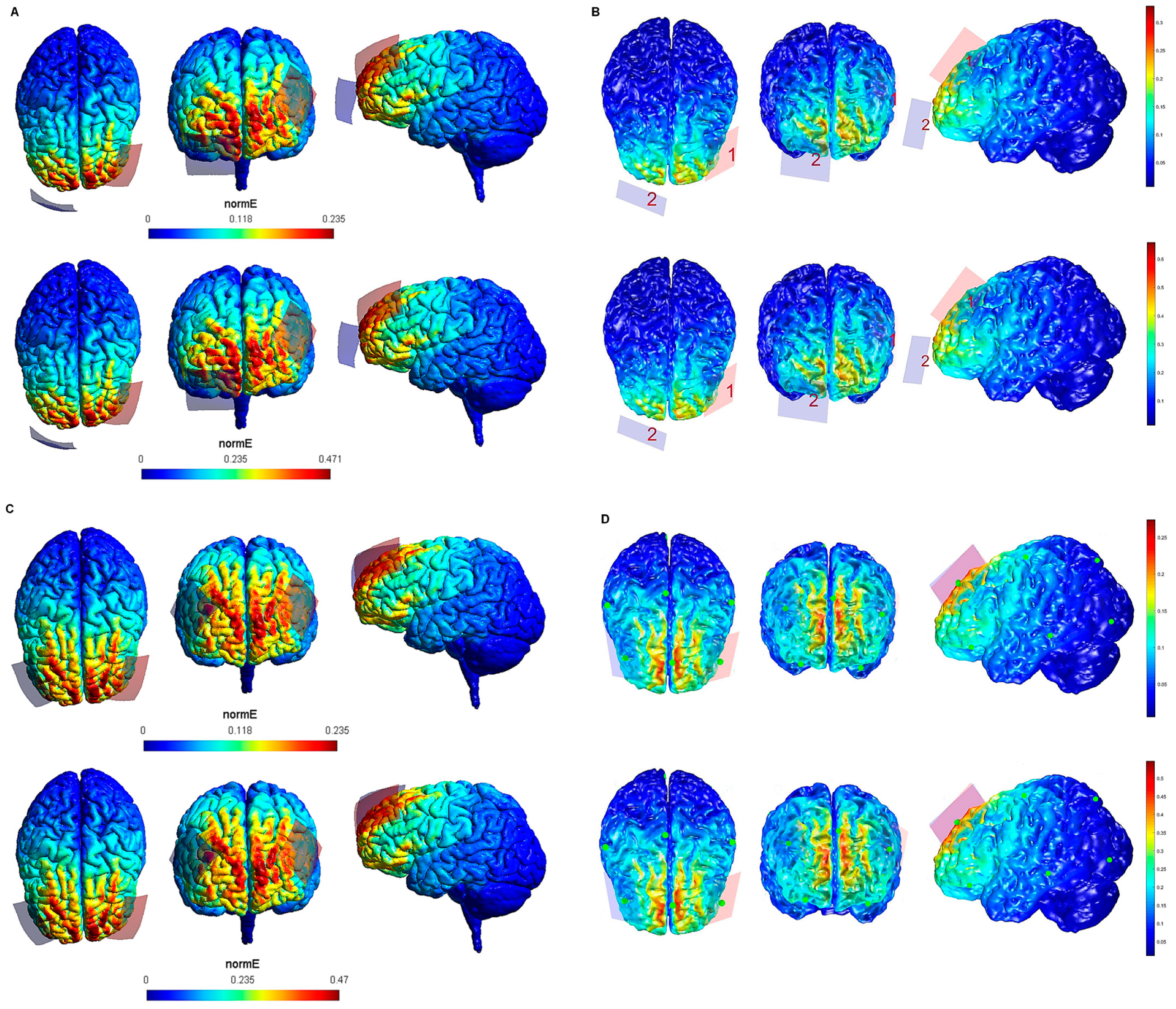 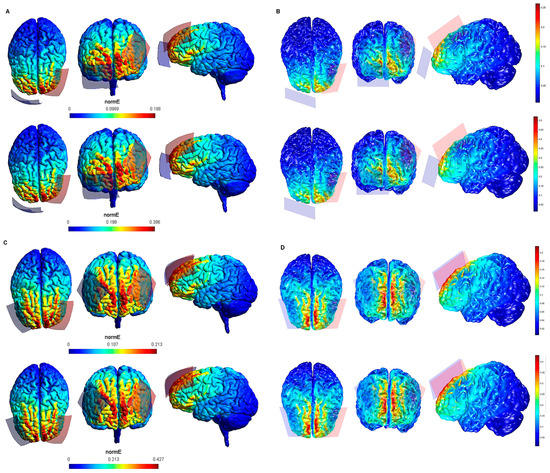 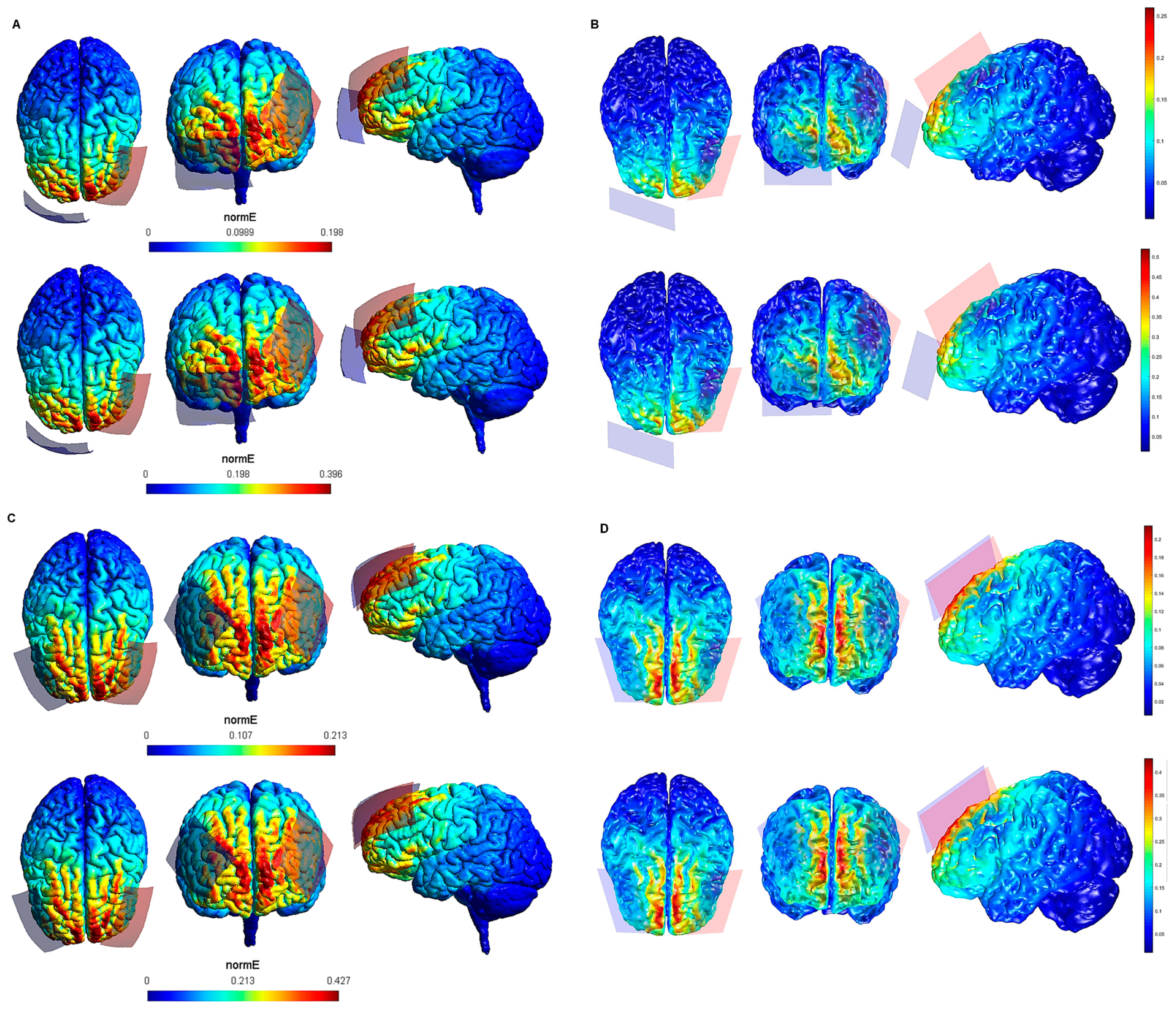 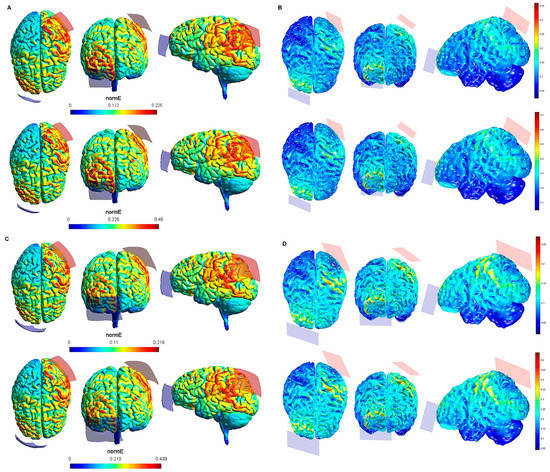 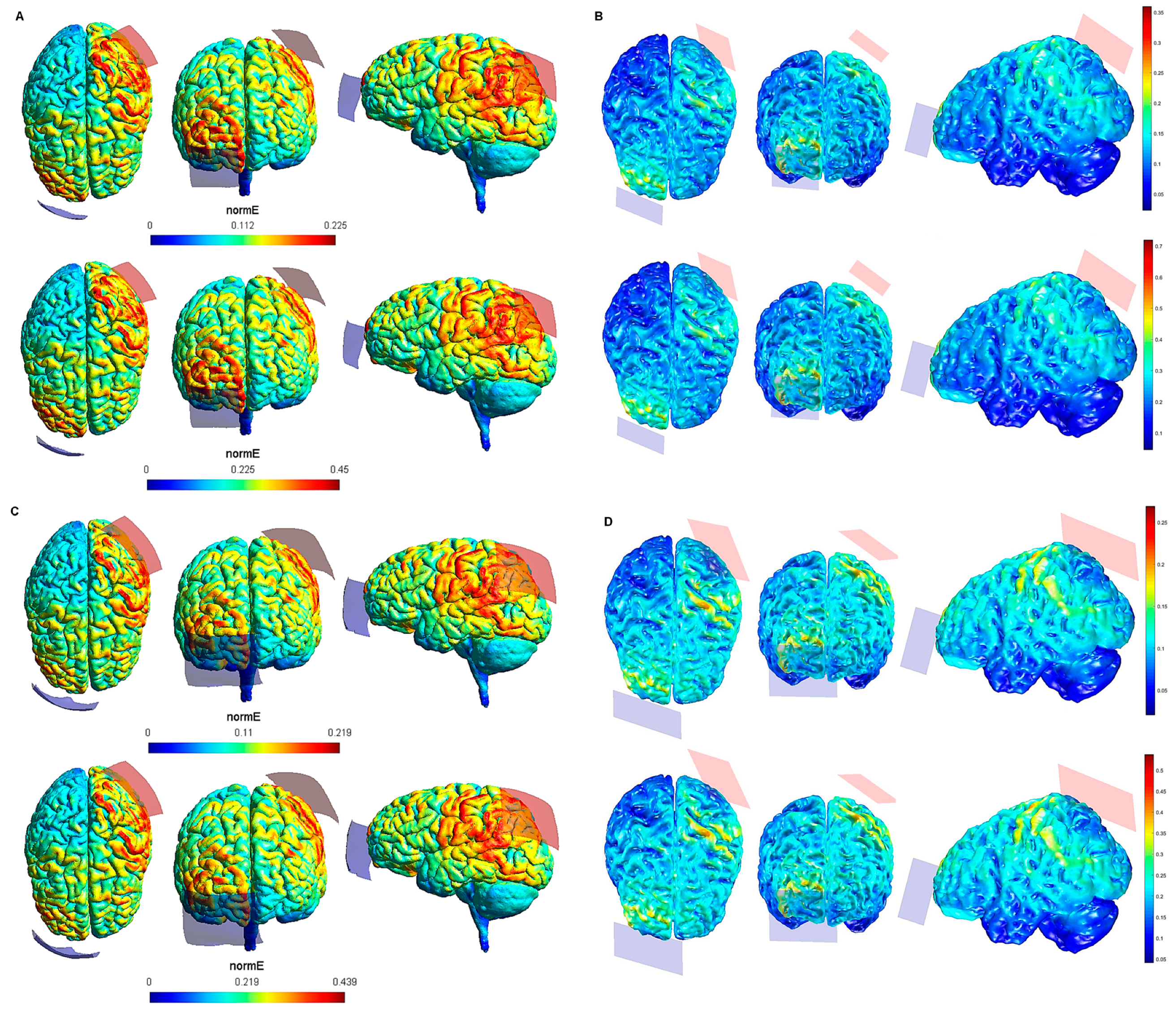