Understanding the Effects of Growing Seasons, Genotypes, and Their Interactions on the Anthesis Date of Wheat Sown in North China

Wheat anthesis date is an important turning point for wheat from vegetative growth stage to reproductive growth stage, which is crucial for wheat to adapt to environment and increase grain yield. In this study, a panel of adaptive wheat varieties including historical varieties from the 1940s and current varieties was used to understand the contribution of growing season, genotypes and their interaction effects to anthesis date. Based on our results, we can conclude that growing seasons contributed tremendously to the anthesis date of wheat. In future wheat breeding, more consideration should be given to growing seasons, and the gene combination with the strongest adaptability to the growing seasons should be selected.

Quantitative studies on the effects of growing season, genotype (including photoperiod genes and vernalization genes), and their interaction (GGI) on the anthesis date of winter wheat (Triticum aestivum L.) are helpful to provide a scientific reference for selecting or developing adaptive varieties in target environments. In this study, we collected 100 winter wheat varieties with ecological adaptability in North China and identified the anthesis date under field conditions for three consecutive years from 2016 to 2019 with mapped photoperiod and vernalization alleles. Our results showed that the number of the photoperiod-insensitive Ppd-D1a allele increased with variety replacement, while the haplotype Ppd-A1b + Ppd-D1b + vrn-D1 (A4B2) decreased from the 1940s to 2000s. The anthesis date of A4B2 was significantly delayed due to the photoperiod-insensitive alleles Ppd-A1b and Ppd-D1b. The additive main effect and multiplicative interaction (AMMI) model and GGI biplot analysis were used for data analysis. A large portion of the total variation was explained by growing seasons (66.3%), while genotypes and GGIs explained 21.9% and 10.1% of the anthesis dates, respectively. The varieties from the 1940s and before had a great influence on the anthesis date, suggesting these germplasms tend to avoid premature anthesis and could facilitate the development of phenological resilient varieties. View Full-Text
Keywords: Triticum aestivum L.; anthesis date; additive main effects and multiplicative interaction model; growing season–genotype interactions Triticum aestivum L.; anthesis date; additive main effects and multiplicative interaction model; growing season–genotype interactions
►▼ Show Figures 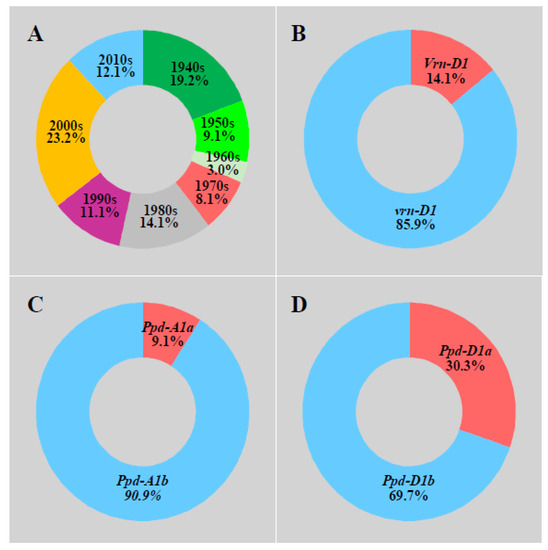 Bangyou Zheng
Bongyou Zheng: PhD, CSIRO Institute of Agriculture and Food Research, Australia. He graduated from the School of Resources and Environment, China Agricultural University. His main research interests include crop modeling, climate change, high-throughput phenotyping of crops, big data, and R language applications.
Zoom | Orient | As Lines | As Sticks | As Cartoon | As Surface | Previous Scene | Next Scene
We use cookies on our website to ensure you get the best experience. Read more about our cookies here.
Accept
We have just recently launched a new version of our website. Help us to further improve by taking part in this short 5 minute survey here. here.
Never show this again