Diclofenac (DCF) and ibuprofen (IBP) are common pharmaceutical residues that have been detected in the aquatic system. Their presence in the aquatic environment has become an emerging contaminant problem, which has implications for public health. The degradation pathway and identification of transformation products of pharmaceutical residues are crucial to elucidate the environmental fate of photocatalytic decomposition of these pollutants in aqueous media. The degradation process might lead to creation of other possible emerging contaminates. In this study, the degradation of DCF and IBP in aqueous solutions was investigated. To this end, coated TiO2 on a Pilkington Active glass was used as a photocatalyst under UVA illumination, in a planar falling film reactor. Pilkington ActivTM glass was used as a photocatalyst and a falling liquid film generator. Degradation kinetics of both pharmaceuticals followed a pseudo-first-order model. The transformation products of both diclofenac and ibuprofen during the degradation process were detected and identified with gas chromatography–mass spectrometry (GC–MS) and ion chromatography. The results showed that the mineralization rate of both pharmaceuticals through photocatalysis was very low. Low chain carboxylic acids, such as formic, acetic, oxalic, malonic, and succinic acids were the main by-products. A pathway of DCF and IBP degradation was proposed. View Full-Text
Keywords: photocatalysis; titanium dioxide; diclofenac; ibuprofen; Pilkington active glass; degradation pathway photocatalysis; titanium dioxide; diclofenac; ibuprofen; Pilkington active glass; degradation pathway
►▼ Show Figures 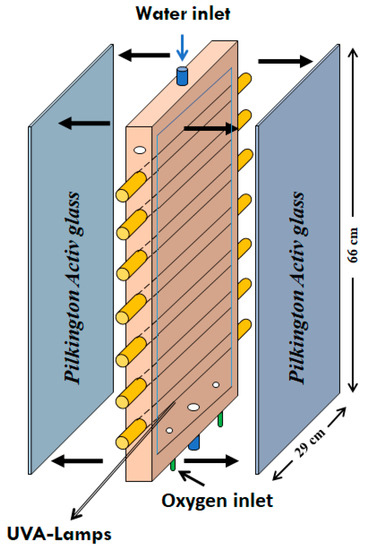