Fe-based amorphous/nanocrystalline coatings were manufactured by SPS. Q235 steel was chosen as a substrate with the dimension of 20 mm × 20 mm × 2 mm. The substrates were firstly cleaned with alcohol solution to wipe out grease and then grit blast with alumina to obtain fresh surface and enhance the adhesion between substrate and coating further. The major spraying parameters were listed in Table 1. After SPS spraying, the coatings were annealed for 1 h at 350, 450, 550 and 650 °C in a furnace under air condition, and then cooled in air.

Microhardness was evaluated by the microhardness tester (HV-1000, Zhongke Measuring Instrument Co. LTD, Yangzhou, China) at a load of 100 g for 10 s. Ten measurements were conducted for each coating in order to determine the average microhardness value. Prior to the microhardness test, all samples were cleaned with abrasive paper and washed by ultrasonic cleaning with acetone, and then washed in distilled water and dried in the warm air.

3.2. The Microstructure of the As-Sprayed Coating and Annealed Coatings

Figure 2 displays the typical microstructure of a cross-section of the as-sprayed coating and annealed coatings. As seen from the SEM images, all of the coatings have a dense lamellar structure with some finite pores. The reasons that the as-sprayed coatings contain finite pores are mainly associated with spraying process. In the spraying process, the high speed influence of semi-fused particles on the coatings accompanies rapid concretion. During the rapid cooling process, the surface of semi-molten particle shrinks, resulting in the appearance of some finite pores. And the junction of particles can also produce micropores due to rapid cooling. Nevertheless, it is clear that the pores decreased with increasing annealing temperature, this is because the un-melted particles undergo diffusion under the action of sintering.
In addition, cracks can be seen from the cross-sections of the annealed coatings; after heat treatment, nanocrystalline grains can be confirmed in the annealed coatings, and much more nanocrystalline grains exist in the annealed coatings can form crystal defects, which usually may generate the cracks [24]. It is obvious in from Figure 2 that the Fe-based amorphous/ nanocrystalline coatings have an inhomogeneous structure with black and gray zones. The EDS proved that the black area was an Fe rich area with a small quantity of Cr and Mo. In addition, the Fe-rich phase became blurry with the increase of annealing temperature. Many researchers also proved the inhomogeneous gray area containing iron oxide phase, and the content of the oxide phase increased with annealing temperature increasing [17,25,26,27]. The variation of microstructure indicated that sintering, diffusion and oxidation occurred during heat treatment.

3.4. Influence of Annealing Temperature on the Corrosion Resistance

3.5. Influence of Annealing Temperature on the Microhardness

Fe-based amorphous/nanocrystalline coatings produced by the SPS technique have compact lamellar structures with few pores. The compact lamellar structure makes the coatings exhibit excellent corrosion resistance. The study of heat treatment shows that heat treatment can promote the formation of nanocrystalline and the second phases. The formation of the second phase in the coatings results in an increase of microhardness. In conclusion, the amorphous structures of the coatings did not change much after annealing at 350, 450 and 550 °C and the crystallization of the amorphous phase occurred close to 650 °C.

The research was supported by the National Key Research and Development Program of China (Grant No. 2017YFB0702100).

The authors are grateful for the support of the School of Materials Science and Engineering, Chang’an University. 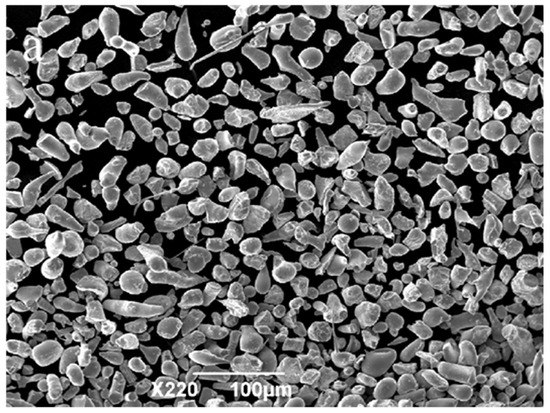 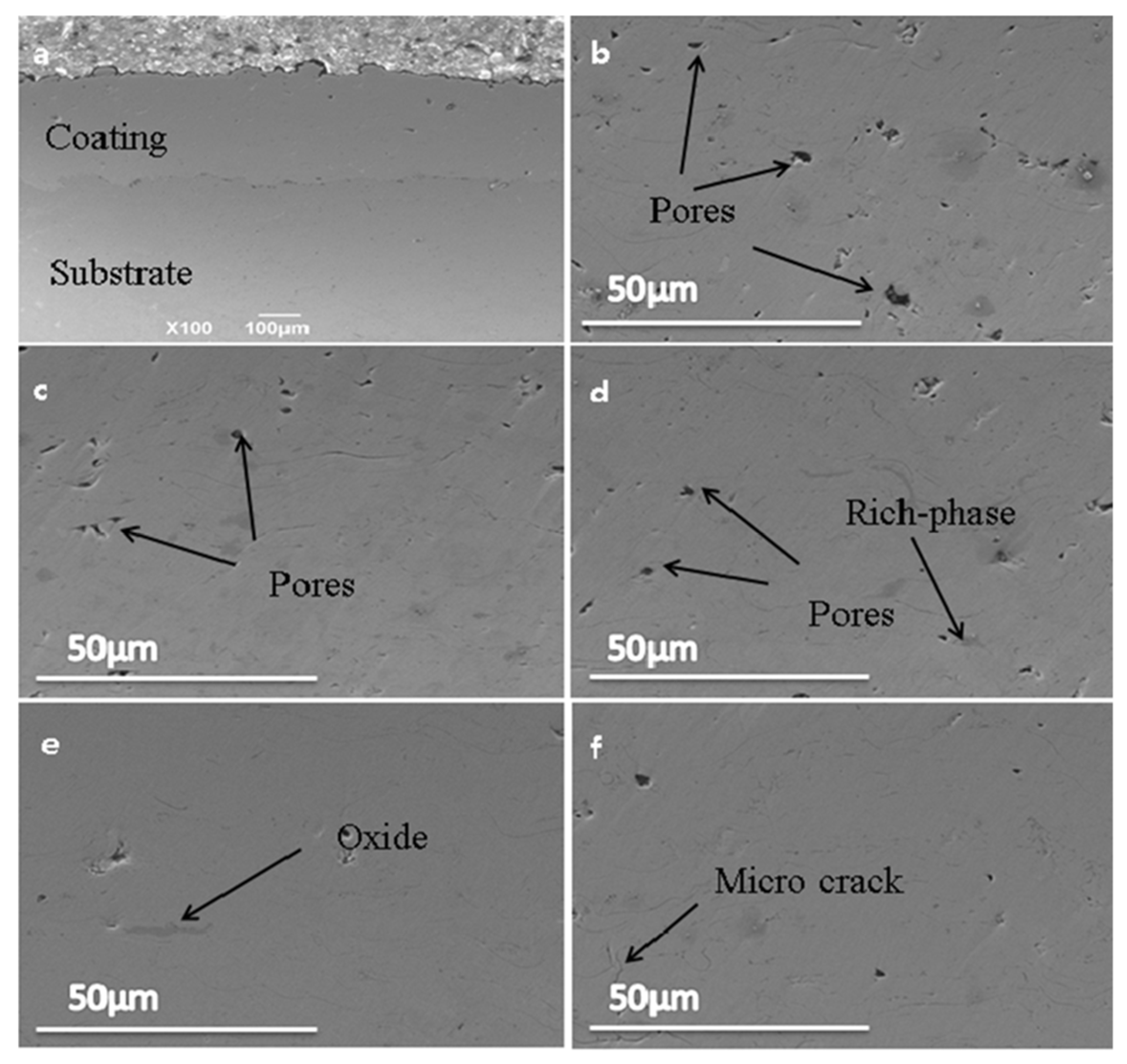 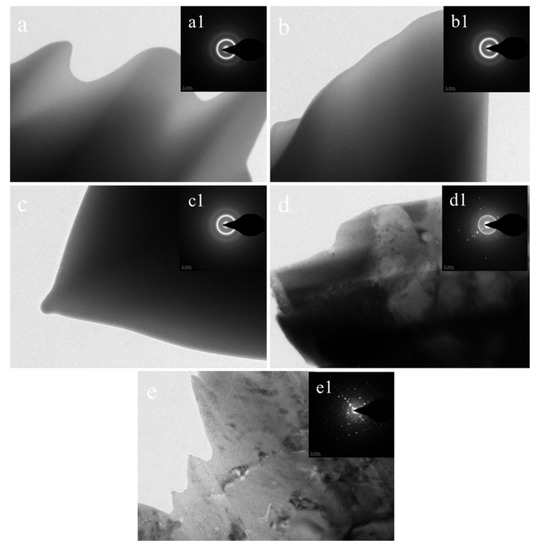 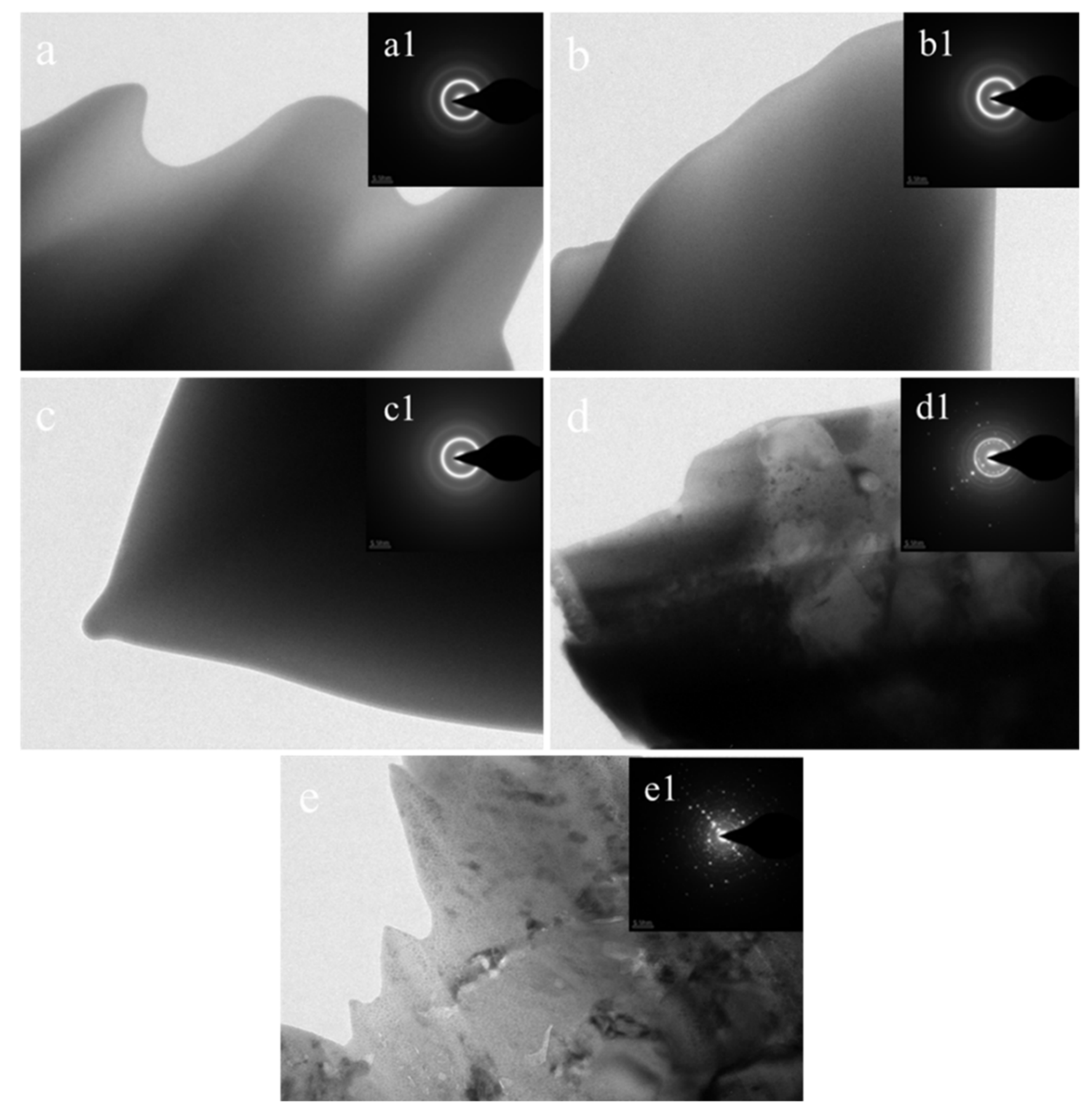 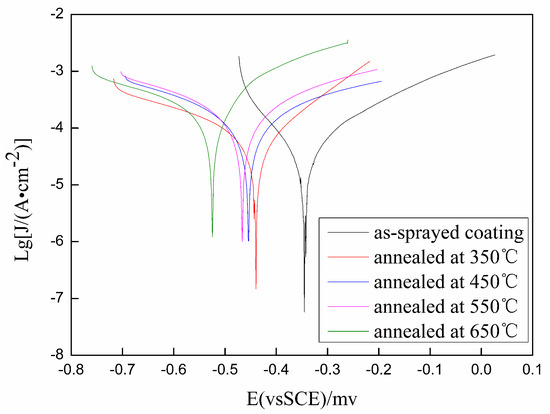 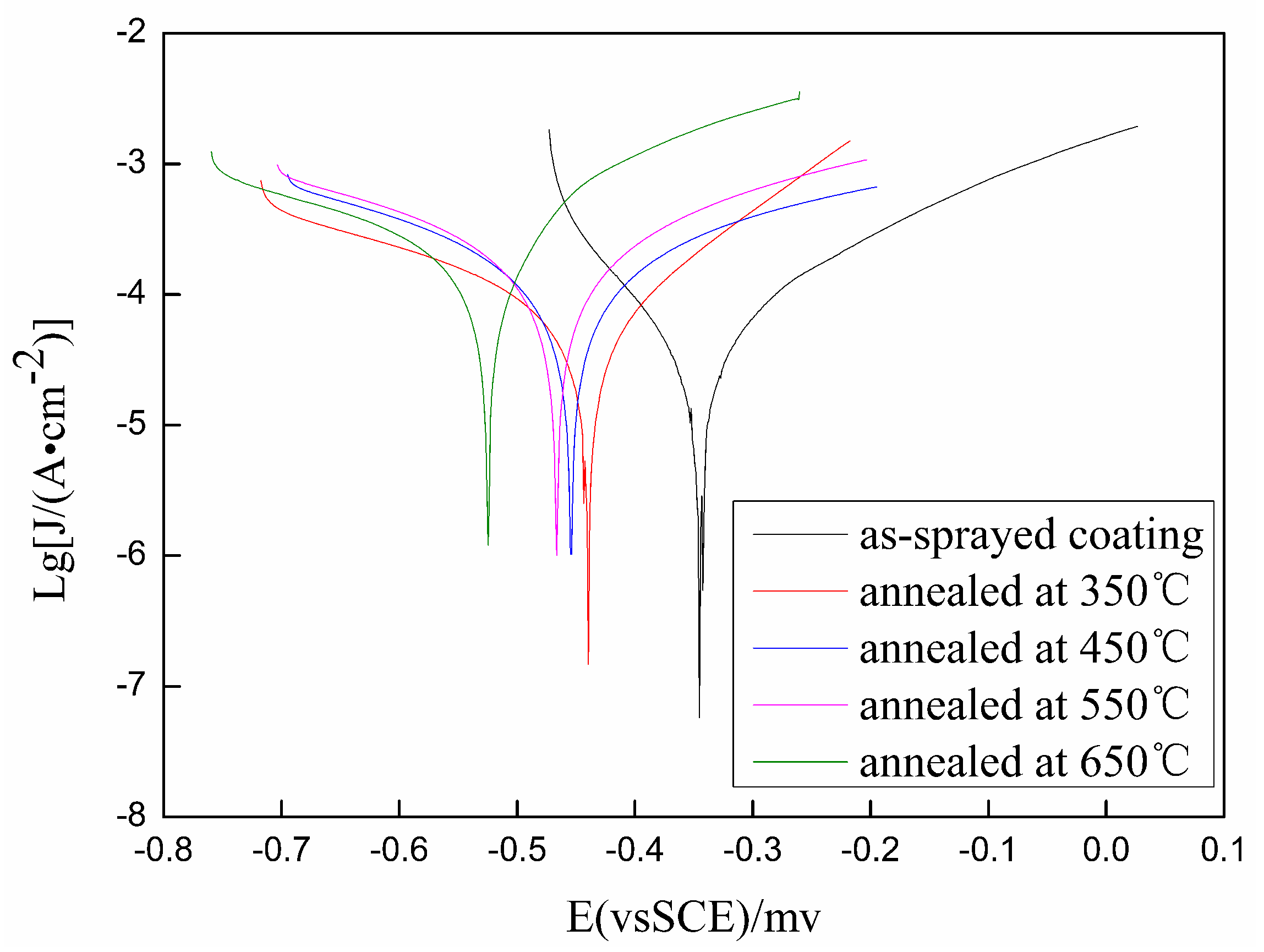 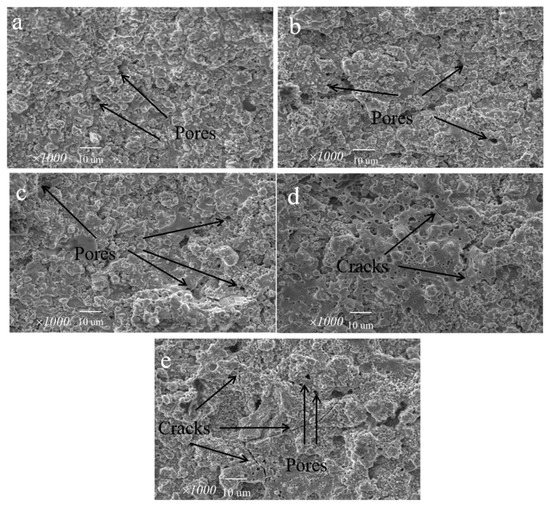 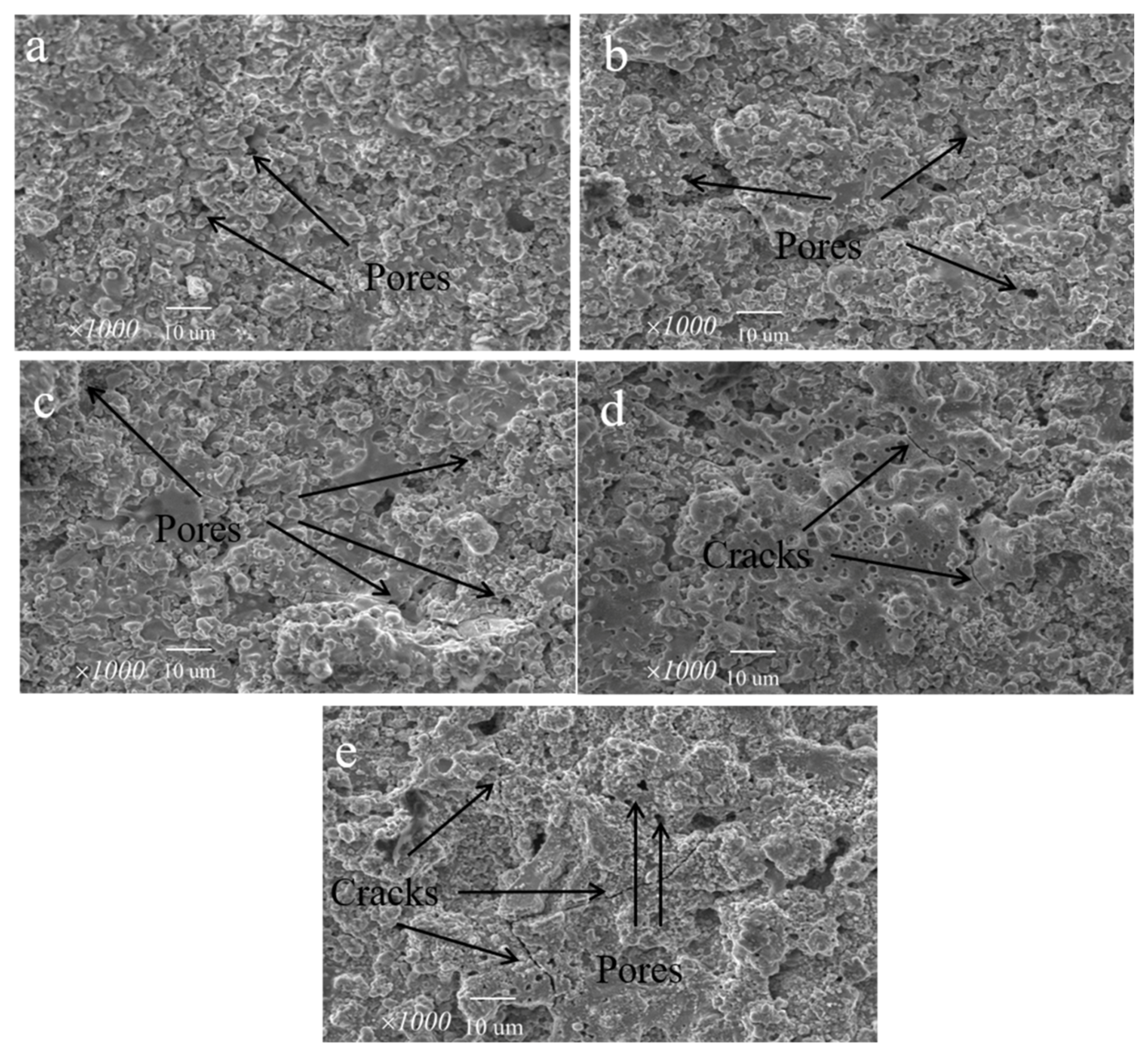 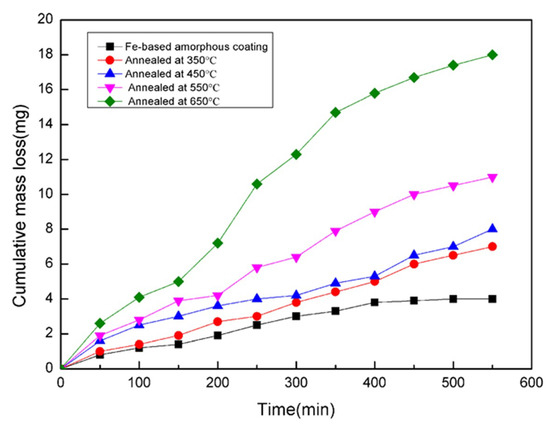 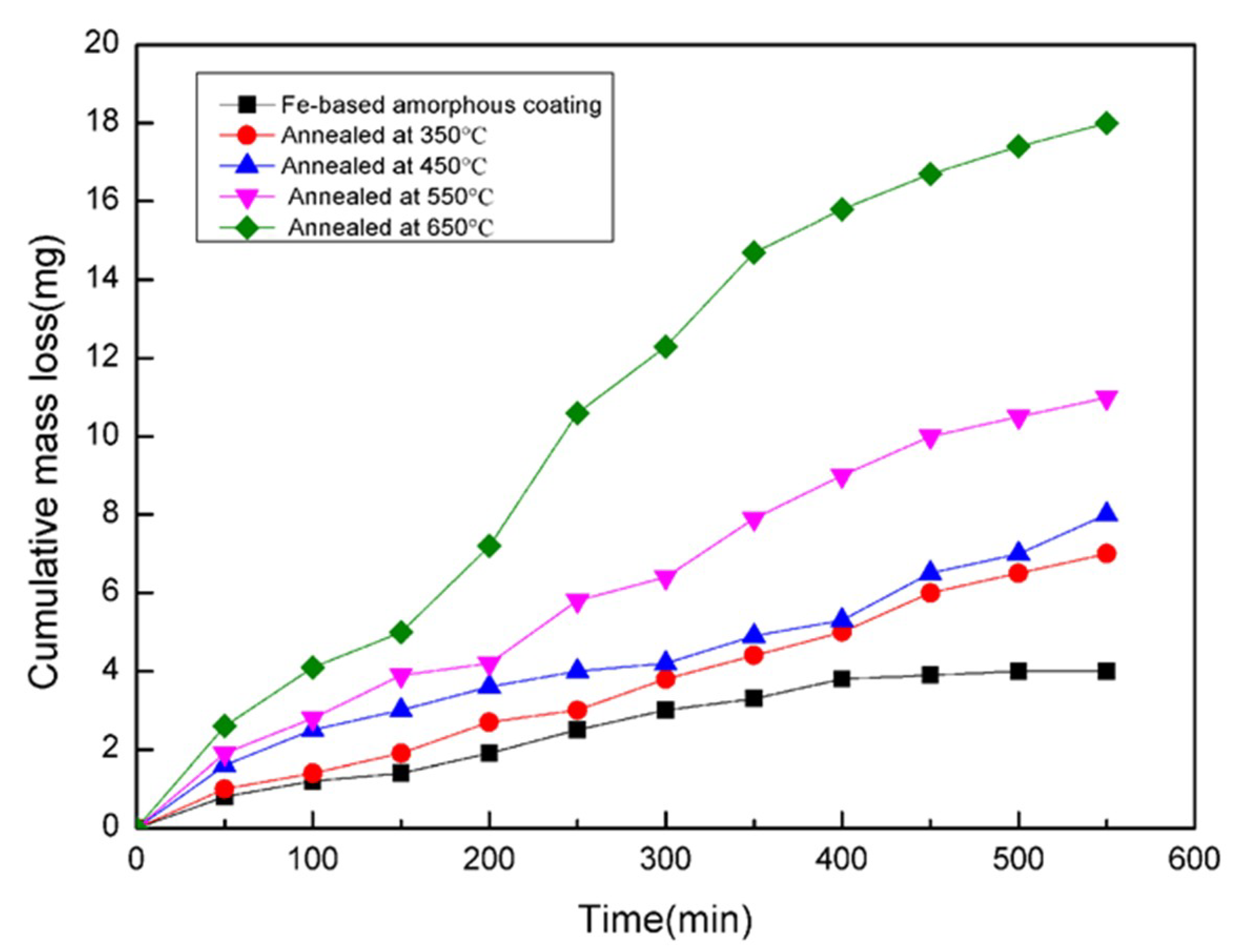